In this recurring series, Canadian Cycling Magazine will take a look at the Monday to Sunday training programs of some of Canada’s top professional cyclists. From the hours on the bike to the other activities and training that gets incorporated into their plans, we will get a glimpse on how Canada’s top cyclists prepare for some of the worlds biggest races. Here is what Peter Disera’s training looks like this winter, and one year ago when he combined university with professional racing.

Peter Disera has been the Canadian cross country national champion for the last two years in a row. It’s a remarkable achievement, considering he’s been mixing racing with academics, studying engineering at the University of Guelph.

This year, he will finally be able to focus 100% on training and racing with Norco Factory Team. In December, Disera graduated from University of Guelph, where he earned his Bachelor of Water Resources Engineering, with Honours.

“I’m still figuring out what to do with all this free time on my hands” Disera says of his post-school schedule, “but for right now I’m really enjoying throwing all my energy and focus into training and having a blast doing it.”

Off the rollers and onto the race track: showing the student-pro combo is possible

When we approached Disera about sharing his winter workouts with us, it was his idea to show how different this season was now that he didn’t have to mix school and racing. “I wanted to do the years in contrast not necessarily to show how crappy it is when you’re trying to be a professional training in a winter climate while at school, but the opposite,” says Disera. “I managed, every year for the last six years, to pull together enough of a winter on the trainer to get through the season.”

That’s not to say it wasn’t hard at times. Looking through the 2018 week, it’s a busy schedule. Adjusting your expectations is also key, says the national champion. Riding rollers helped keep his fitness up but, Disera admits “I paid for it in the early season races where a lot of the time they were my first rides on my mountain bike outside.”

Training program for a winter week for Peter Disera in 2018

Disera: As an engineering student at the University of Guelph winters were tough. I took my time, but hurried, with my degree. During the winter semesters I would aim to only have three classes to free up my schedule but the load was still high.
Meanwhile, it is -10 outside, the roads are icy and the trails (limited in Guelph to begin with) are snow covered. So that means between classes and studying I’m on the trainer. A typical week at school saw between 15-18 hours with gym work and focused, structure workouts on the trainer in order to get the most out of being inside. However, the week shown above was a little unique due to the fact that I was taking off to the first World Cup in South Africa a couple weeks later. Therefore, the work being done, including some intensity, was in preparation for the race. Always fun to prepare for your first World Cup inside on a trainer but that was my life as a student – I could only get so much time off.

Training program for a winter week for Peter Disera in 2019 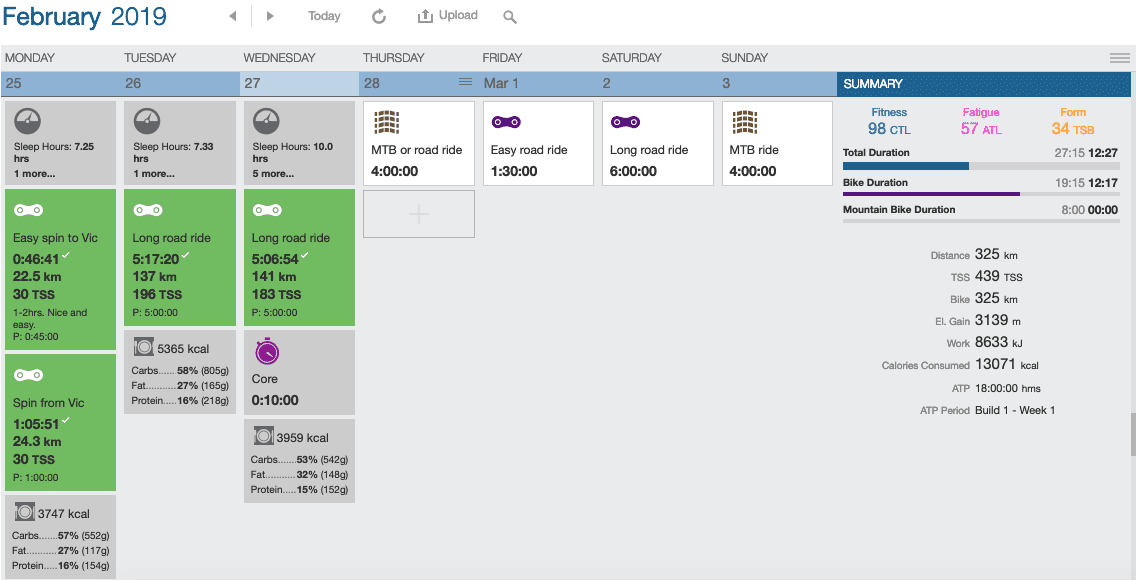 This week, featured above, was being executed in Victoria, B.C. North America, as a whole, is going through some wack weather, so I’m lucky that although it was cold in Vic the training was still good. This week was a build week, focusing on topping up the hours after a large racing block in Greece early in February followed by some rest. We are getting in some good hours with lots of endurance focused riding. The focus will shift slightly later next week as I begin to prepare for another race block in California. That block will extend over five weeks with four races.

Notes from the national champ: how to survive school while training full time

My suggestion to any future student athlete out there: don’t compare yourselves to athletes who aren’t in school (particularly January to March – you will go insane). Additionally, choose a school that either doesn’t have crazy winter (coastal) and facilitates good training (trails / roads), or go to an area that has great winter activities (XC ski, mountains, snow) as this will help you reduce your trainer time.

My suggestion to any current student athlete: chew it up, spit it out, you’ll sleep when you die… and reduce your course load. Also, talk to your profs way in advance. I would email professors, the moment I enrolled in their class for the following semester, to inform them of my situation and lack of attendance due to races and camps. Lastly, work your butt off to have the best mark possible so when you have a conflict between a final exam and Sea Otter you have a high enough mark in the class to skip the final and go racing (I’ve done this twice – sorry not sorry).
Peter Disera is currently preparing for early season racing at U.S. Pro XCT season opener this weekend in Bonnelli Park, California, then the Bear Mountain Canada Cup in Victoria B.C. After that, World Cup season begins in Albstadt, Germany. This year, the international race season will lead him back to Canada when UCI mountain bike world championships take place in Mont-Sainte-Anee, Que.

A big week of off-season training with Michael Woods

A week of winter training in Montreal with James Piccoli

A week of winter base training with Leah Kirchmann

A week of winter training in Canada with Catharine Pendrel

A winter training week focused on recovery with Haley Smith

A week of winter training with Sara Poidevin