As a World Cup venue, Snowshoe, W.Va. is cultivating a reputation for drama. Saturday’s women’s final only added to that, as a close race for the season title was thrown into complete upheaval.

In the end, it was a matter of timing. Vali Höll found confidence when she needed it most. Reigning world champion Myriam Nicole faltered when it cost her most. Höll found her second win, and a suprise win in the series overall. A stunned Nicole watched her chances at the title disappear in a cloud of West Virginia dust.

Emilie Siegenthaler was the first rider to put down a solid time on Saturday. The Swiss rider looked comfortable and confident racing the last World Cup of her career.

As soon as the action started, it came to a grinding halt. Jessica Blewitt was riding solidly before crashing hard near the bottom of the course. A lengthy course followed, sending Atherton’s Millie Johnset and Germany’s Nina Hoffman back up to the top of the course. The aspiring freerider wnt down hard, but sound to have escaped with only broken bones.

Tahnée Seagrave was the first to drop after the course was opened. The Canyon Cllctv FMD racing rider bested Siegenthaler’s time to move into the hot seat.

Johnset and Hoffman were back on course next and not looking shaken up by their re-run, but not able to match Seagrave’s time.

It was Vali Höll up next, though. The winner of Wednesday’s World Cup, Höll looked immediately more confident on course. Höll sent the huge transfer jump she skipped earlier in the week, found creative lines through the rocks and smashed Seagrave’s time.

Camille Balanche (Dorval AM), ever the consistent rider this year, looked mostly smooth on course, but couldn’t match the young Austrian’s time.

Marine Cabirou was the second last rider. Built momentum the whole way down the track, but cross the line 0.256 behind Höll.

One rider remained at the top of the mountain. World Cup leader, Myriam Nicole dropped and was setting fast times the entire way down the course. The Commencal/Muc-Off rider was looking for redemption, after crashing in her run Wednesday. But also looking to hold on to her lead in the series.

It all came undone, though, when Nicole washed out on a dry, loose corner. After crashing Wednesday, Nicole still managed to finish fourth. Even after hitting the ground, Höll, the next in line to take over the lead, couldn’t start celebrating. 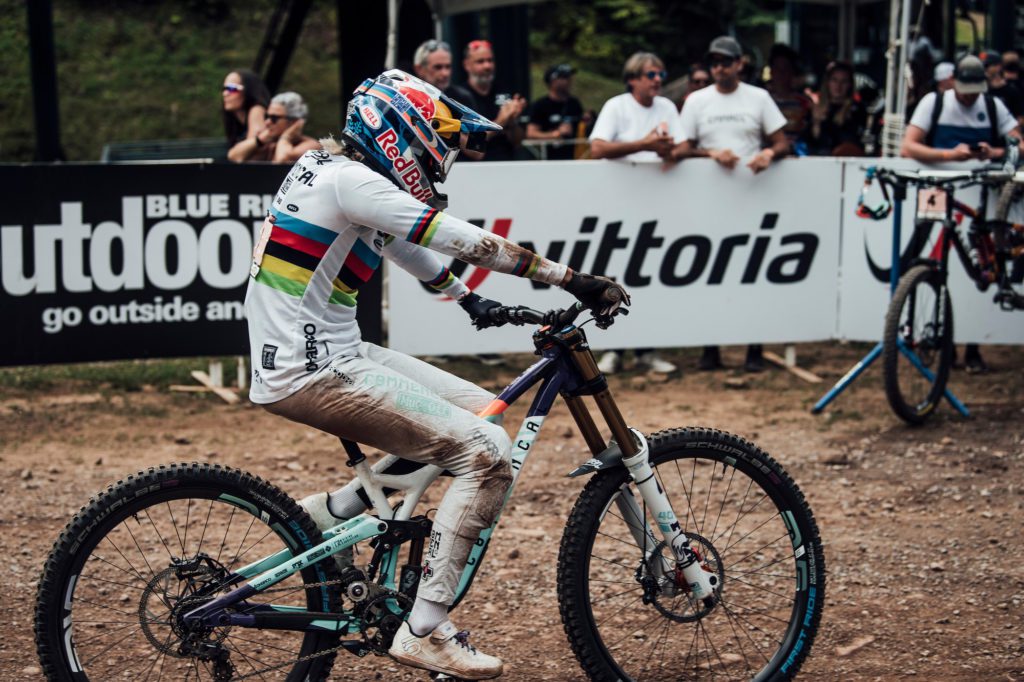 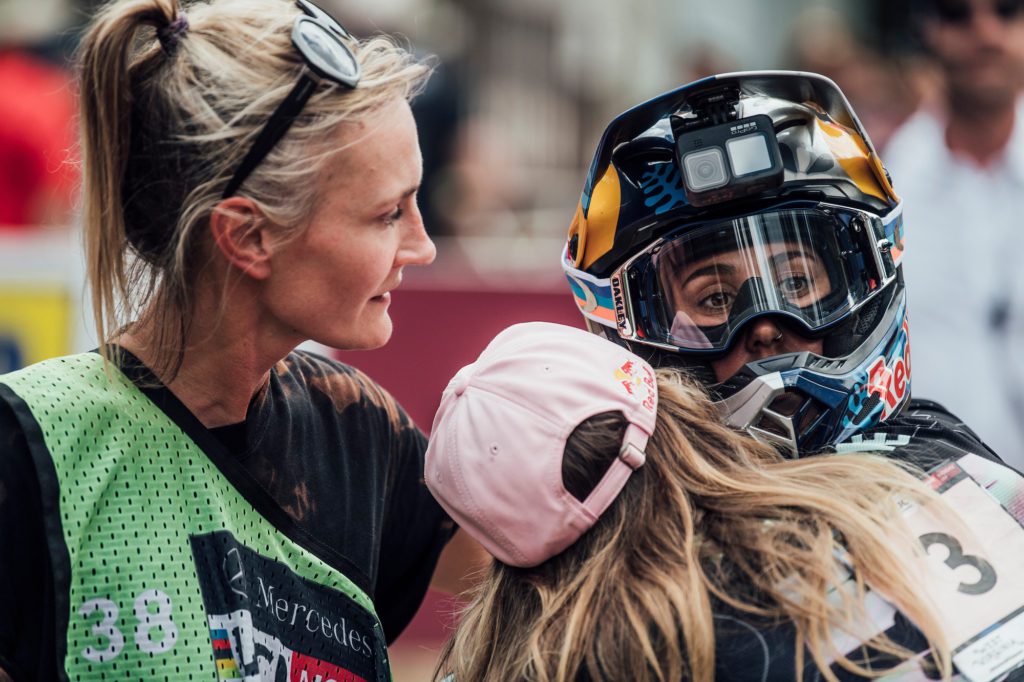 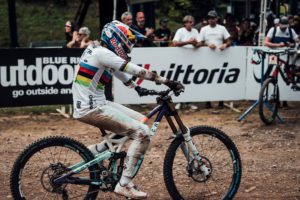 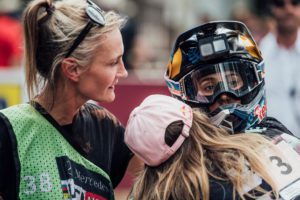 Nicole remounted, sprinted and rode clean to the bottom. Crossing the line, Nicole could only manage seventh. 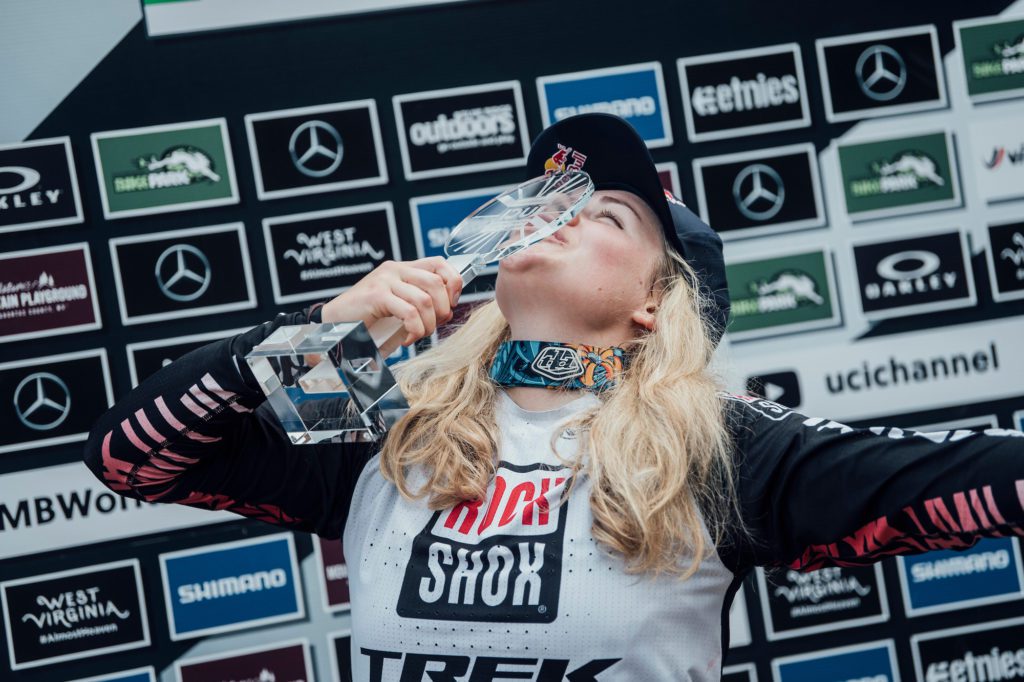 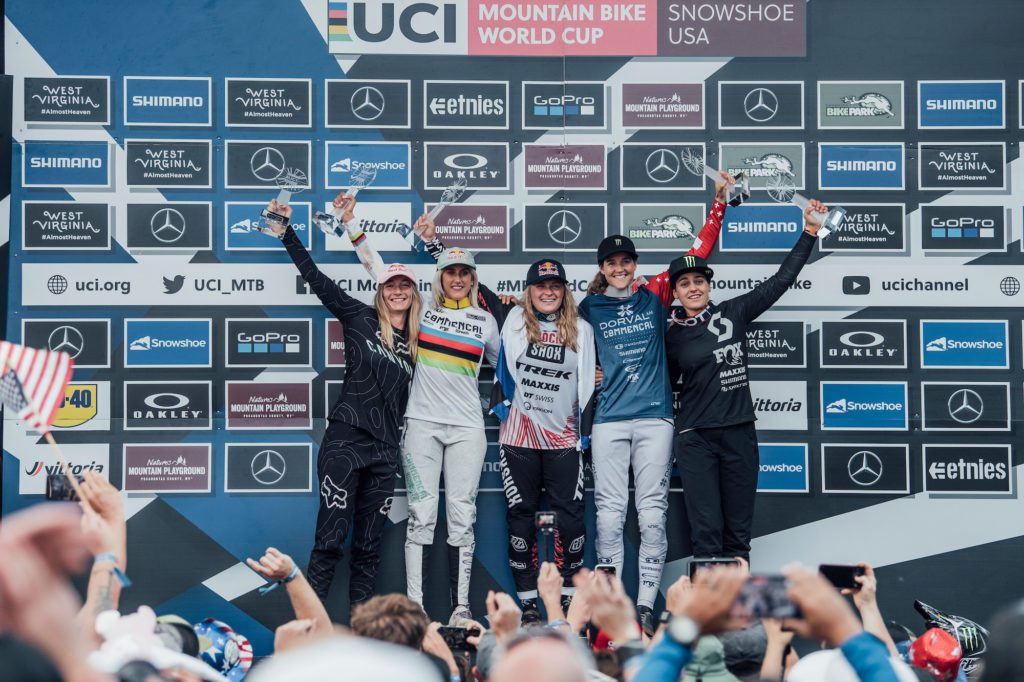 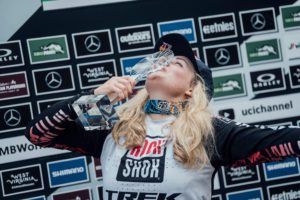 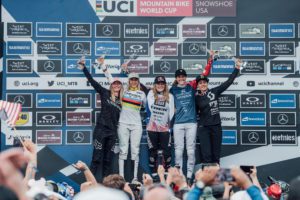