Full confession, I’ve never really been one of those Campy people. I didn’t quite get the hoopla and the mystique surrounding the Italian company’s components. Now I really appreciate Tulio Campagnolo’s invention of the quick release, and I’m a sucker for stories about Italian legends, such as Gino Bartali and Fausto Coppi, just like cyclists everywhere who live to throw their legs over their bikes. But I just didn’t get what all the fuss around the brand’s legacy was about.

That is, until I spent five months riding the new Campagnolo Super Record mechanical groupset.

Most of the details around the release we’re covered here so I won’t drone on too much. The key changes really do go beyond the number of sprockets on the cassette. Yes, they’ve added in a 16-tooth sprocket so your first seven shifts only have 1-tooth jumps. But the biggest reason to celebrate is that they’ve done this without changing the freehub body. Meaning you don’t have to get rid of your old 11-speed wheels.

When it comes to shifting both derailleurs have seen significant redesigns. At the back, there’s a new parallelogram shape and a longer cage to accommodate both 11-29 and 11-32 cassettes. Keen eyes will also notice that the top jockey wheel not only moves closer to each cog but forward with each upshift to help further improve chain wrap and power transfer.

The front derailleur operates with a new mechanism as well. A lever arm pushes on the plate of the derailleur cage giving a linear trajectory when shifting between wings—a design that makes the shifting smoother. During a recent early spring road race here in Ontario this was greatly appreciated. The temperature had dropped, there was little feeling in my hands, and it was still easy to shift as my ability to make fine movements disappeared.

What I noticed most in my time with the new Super Record was how it felt. The touch points are where you have the most visceral interactions with your components, and it’s here where I really began to understand why fans of Campagnolo’s groupsets are so loyal. If you have a hand shape that works with the shape of their shifters, as it appears I do, there is a marked improvement in comfort over the course of a 4- to 5-hour ride. My biggest concern before the test ride was the thumb shifter, that it would be hard to reach and most times this wasn’t an issue. Campagnolo has made a subtle change to the shape and orientation on the new Super Record that has made it much easier to access. The shifter now has a slight downward orientation and is a little wider than the previous 11-speed version. The handlebar I’ve installed on the bike makes reaching the shifter a little harder as well and this might be the one change I would make to the setup. I’ve got an aero handlebar that has a wide flat top with a minimal forward sweep. This creates a pressure point on my forearms when I’m trying to shift down while sprinting in the drops. A change to a more traditionally shaped bar would likely address this.

When you get your hands onto Campagnolo hoods for the first time you’re struck by how different it feels to shift than on other systems. Each shift has a purposeful “clunk” that confirms you’ve moved up or down into the cassette. It takes a few rides to get comfortable with this feeling as the sound almost resembles a missed shift on other groupsets. But within a few rides you’ll find that positive reassurance comforting as there’s never any doubt that you’ve shifted.

So far in my time with Super Record, we’ve been on group rides, solo training rips and a fair amount of office park criteriums. On each ride, it performed flawlessly. In southern Ontario where I do most of my riding, we don’t have a huge need for the extreme ends of the cassettes. But I did find myself shifting more than I normally would have with previous 11-speed cassettes. With one-tooth increments through the first seven cogs, it was easy to find a comfortable cadence while I was putting in some quiet base miles throughout the winter. On a cassette with some bigger jumps, you would be forced into a much lower or higher cadence with the respective up or downshift.

But it’s when racing and on fast group rides that this groupset really excels. I’ve found the one button-one action shifting to be super intuitive when your heart rate is red-lining And when you’re packed in tight with the peloton the small shifts are great for the little changes in pace as you round an uphill corner or approach a 180-degree bend in a parking lot crit. Nobody wants to feel the wrath of the master’s peloton as you slow down or speed up excessively in the group. Zippy group rides have a similar problem, you’d better not leave that gap open or you’ll be hearing about from the rest of the group. The new cassette options definitely help keep things smooth for you and the people around you.

The Canadian climate does present some unique challenges to the Campagnolo groupset. Shifting up the cassette requires a rather fine movement with a single finger. In some colder rides during my test period, I found this to be difficult after two or three hours on the road when I would begin to lose feeling in my hands. During a recent very rainy O-Cup I lost almost all feeling in my hands and shifting was a real struggle. Now, most might say it was really quite silly of me to be out in those conditions but nonetheless I was out there pedaling squares in the early days of what the weather experts called “spring” this year. 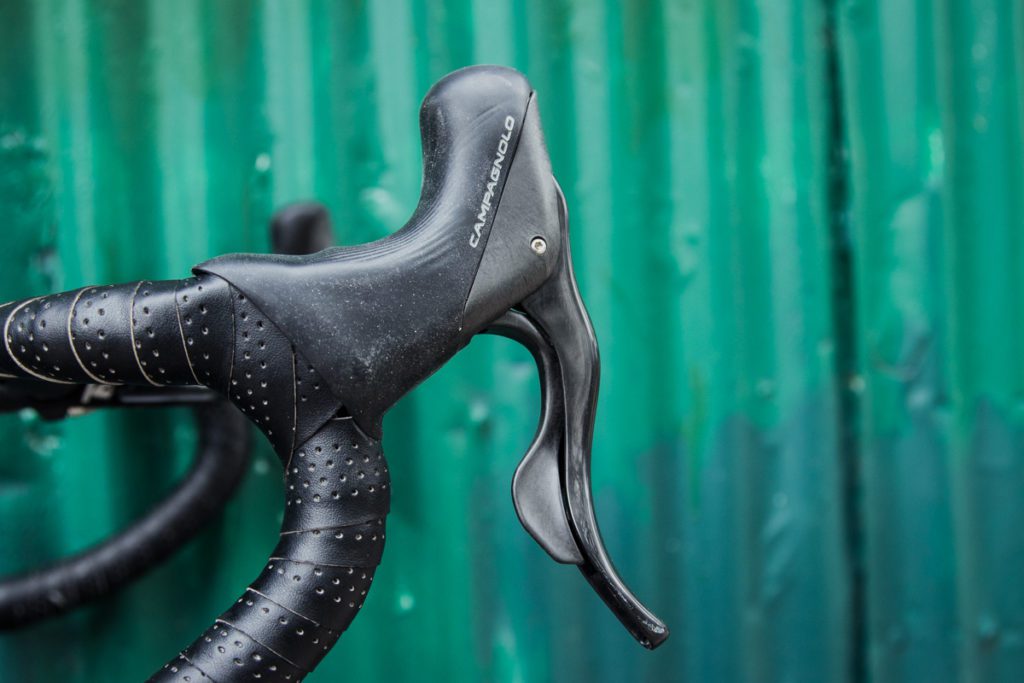 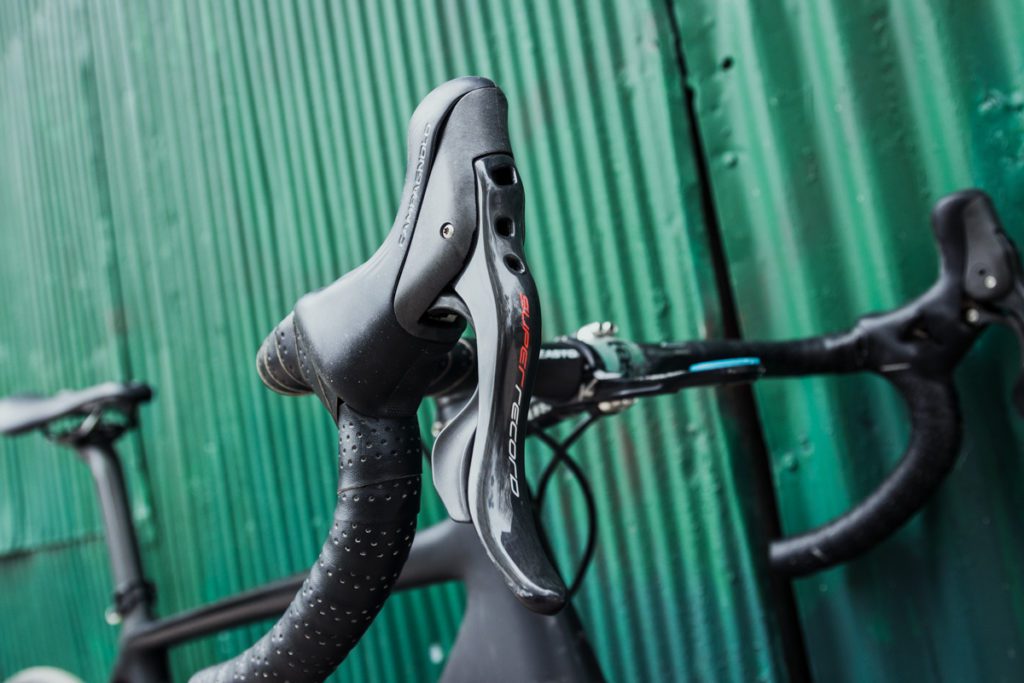 The curves of the breaking and shift levers fit a wide variety of hand shapes and sizes. Photo: Matt Stetson 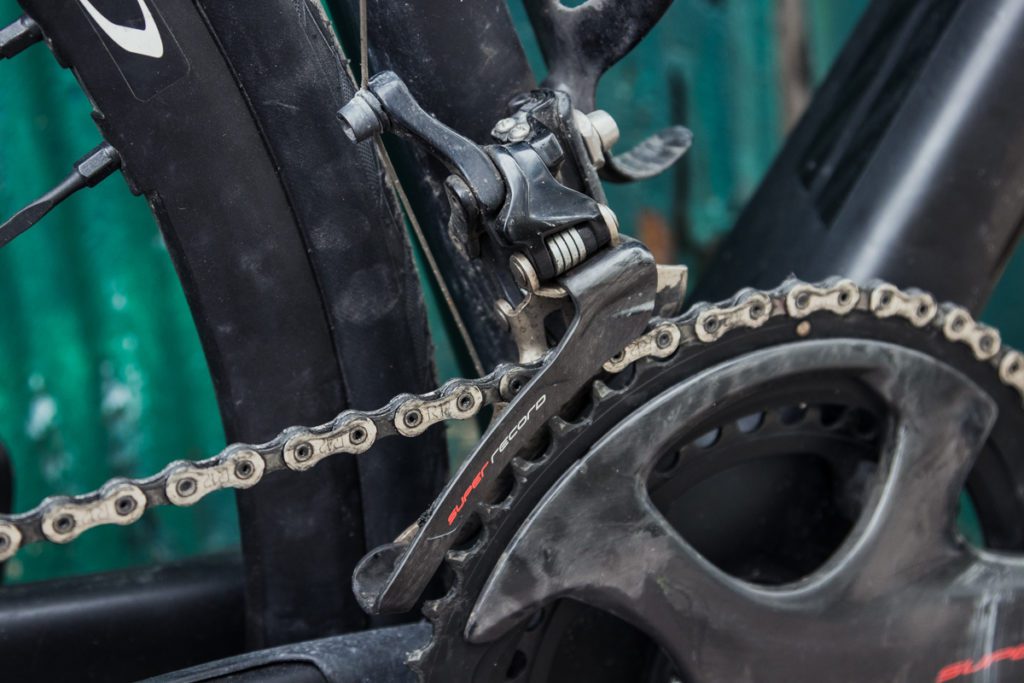 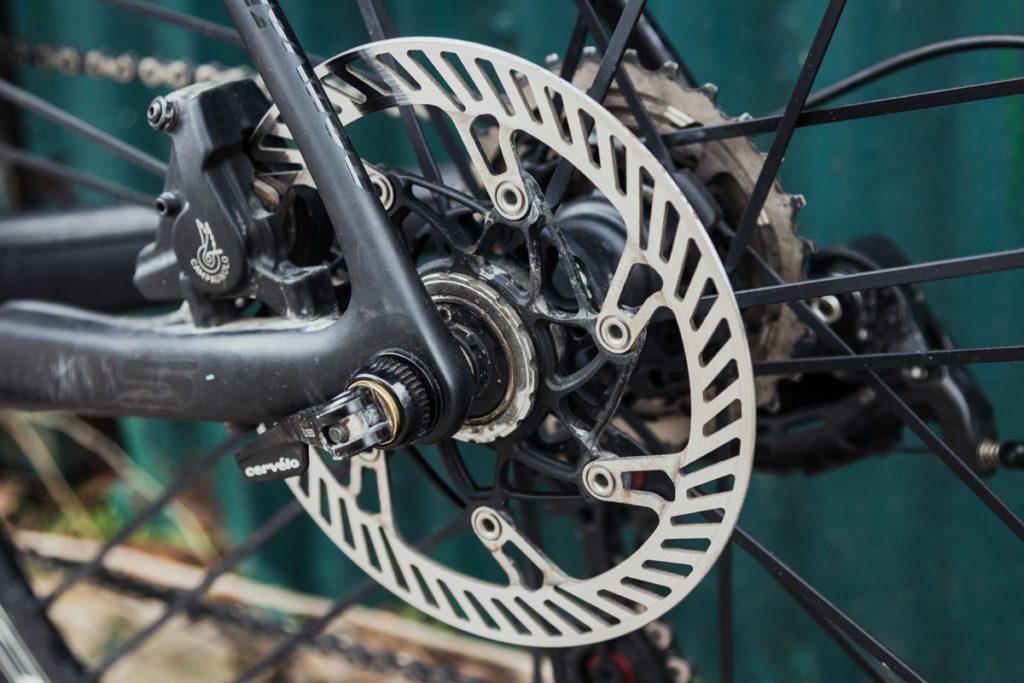 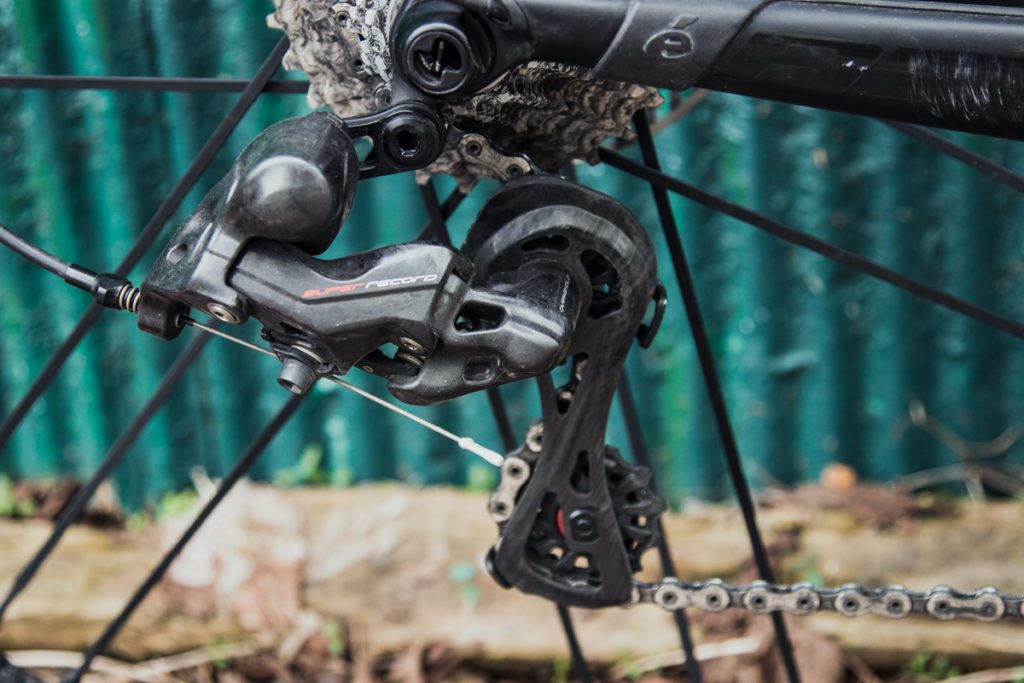 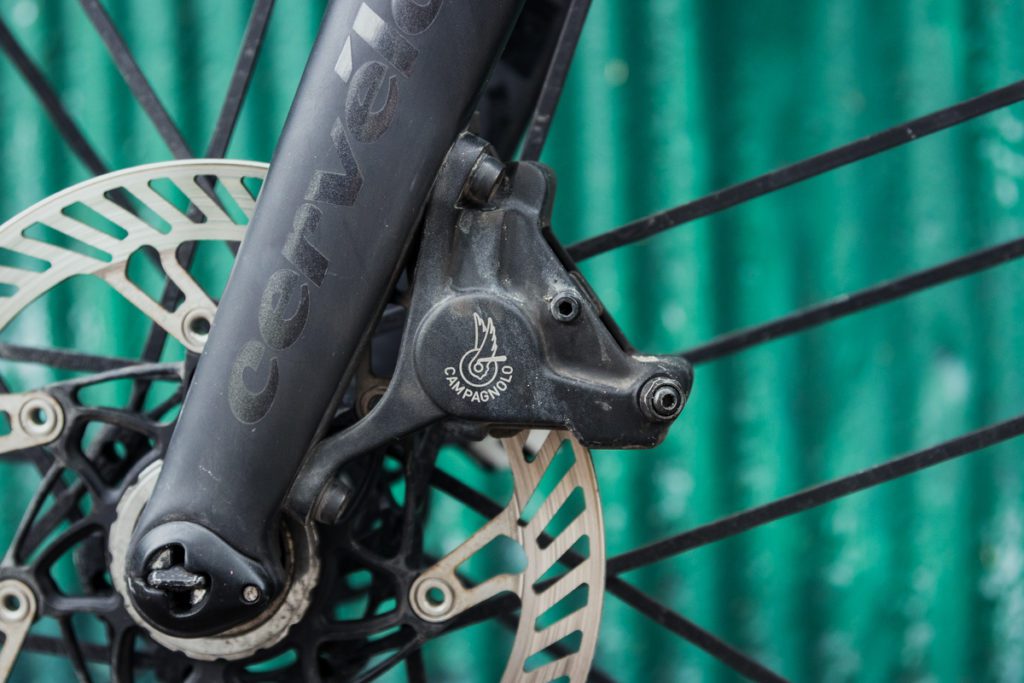 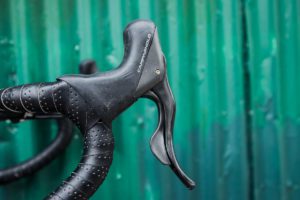 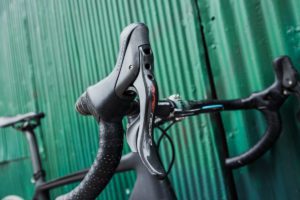 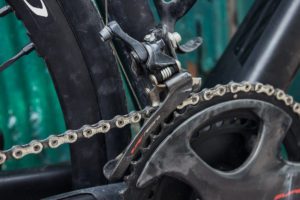 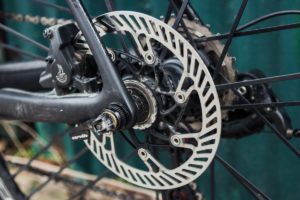 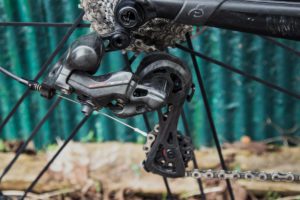 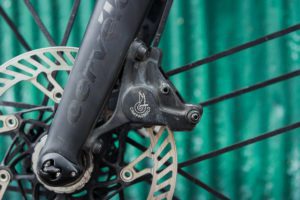 Is it too much to say that a groupset causes an emotional reaction? Probably, but there is a silly grin that comes over my face when I get to the top of a hill and I flip that thumb trigger and downshift five cogs at once. It’s pretty hard to put a price on that feeling and even though Super Record comes in at $4,570 having fun and getting more hours in the saddle is usually always worth it. There’s something to be said for shifting performance that never wavers, it’s what you imagine being a pro feels like. And while us Joe’s can’t put out the watts they do, there’s no reason we shouldn’t be able to get the nice clean shifts that Alejandro Valverde or Nairo Quintana do. Is this the best groupset out there? At this level, they’re all excellent but what shifted me over (pun intended) to Campagnolo was the small jumps on an 11-29 tooth cassette and some exceptional ergonomics that have kept me riding in comfort all spring long.