After four years of little riding, Clara Hughes is in love with her bike again. The six-time Olympic medallist has mostly been walking, using her bike mostly for commuting or getting groceries. “I got on this hiking rampage, walking kilometres and kilometres of trails. I really got into hiking,” Hughes said. “But this past year, I’ve really got back into cycling, and I forgot how much joy it is for me to ride a bike. I’m definitely back in bike mode.” 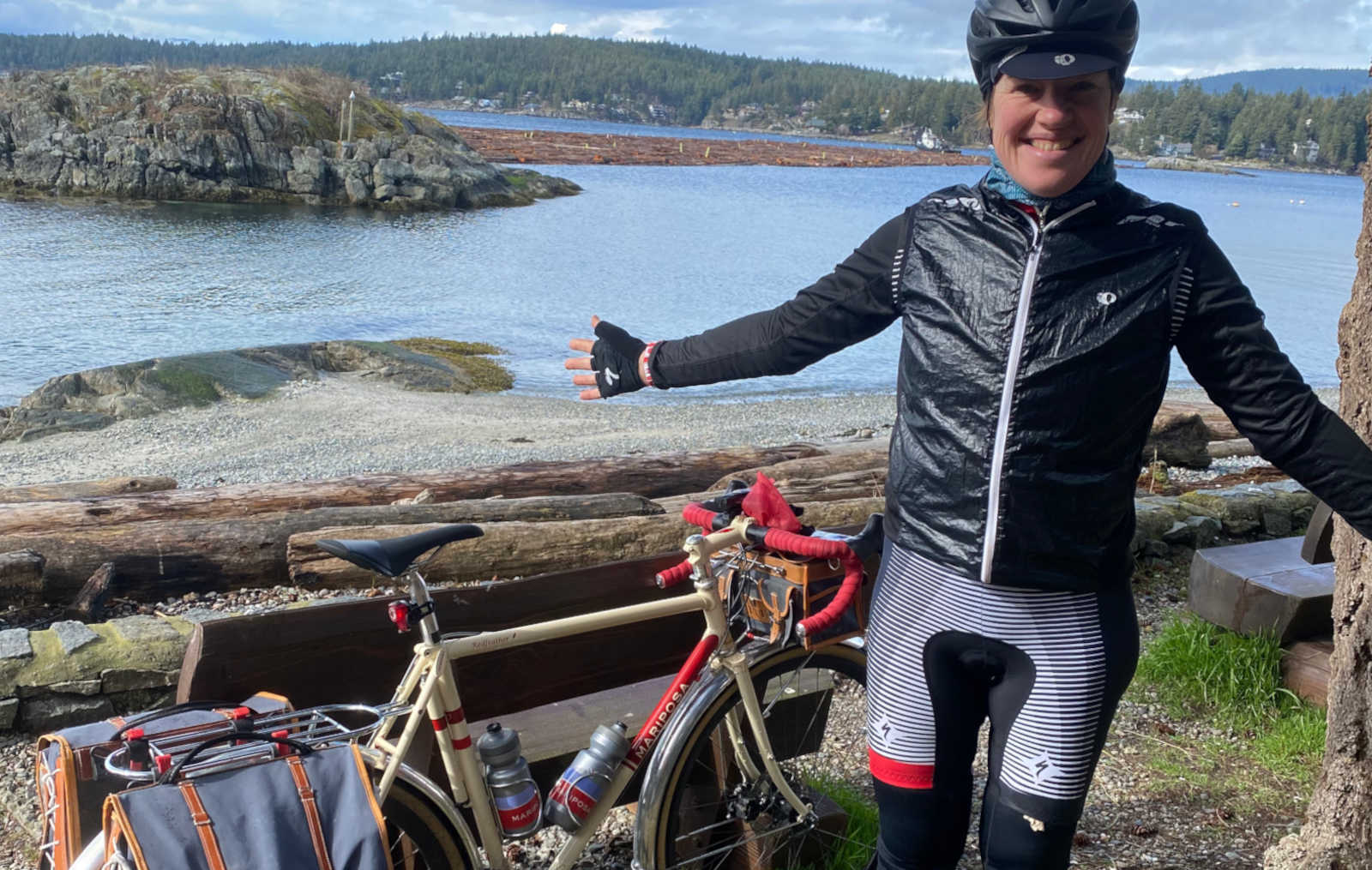 Like some other former Canadian pro cyclists, Hughes has been bitten by the bikepacking bug. Hughes and her husband Peter Guzman are celebrating their 25th year of being in each other’s lives, and they spend as much time outside as possible. “I am still learning new things about him every day. Peter has had so many influences on me,” Hughes said. “And the greatest one has been the love of riding a bike and the adventures. I love bike camping and touring and will do it until the day I die. We recently did a bike tour of Vancouver Island and it was fantastic.”

Hughes got into bikepacking when she rode from Banff to Vancouver Island with her friend. She tries to do it as much as possible, sometimes even solo. Bike camping combines her joys, being outside and camping, and riding her bike. “The nice thing about bikes, versus hiking, is that the bikes go fast!” the Olympian said. “I don’t ride my bike daily, I wish I did, but when I do I absolutely love it. I had really forgotten for those three years how fun a bike is.” 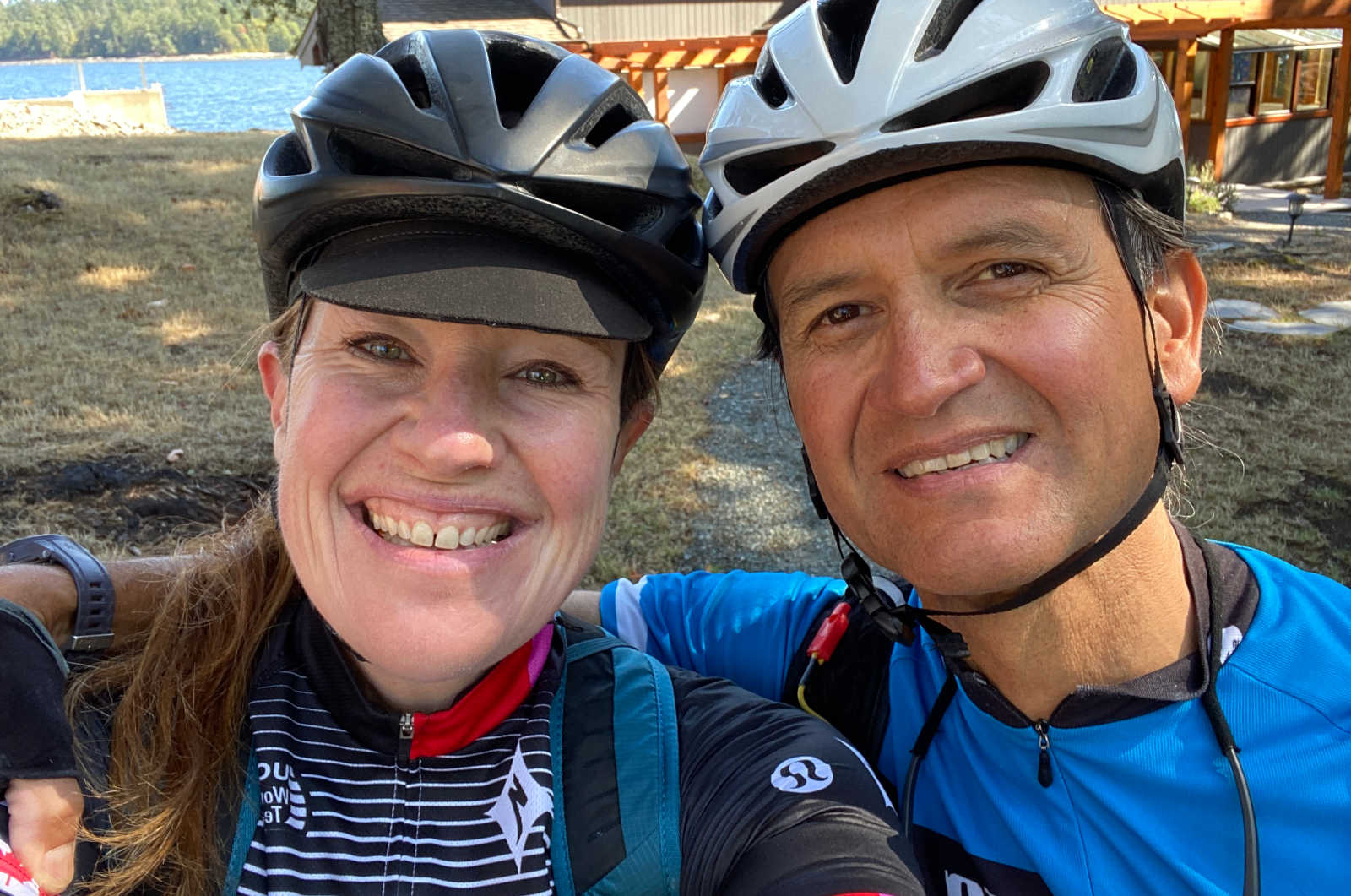 For Hughes, bike camping is about freedom, and connecting with nature. “At this point, Peter and I are more comfortable in a tent than indoors. There’s nothing better than stealth camping,” Hughes explained. “The ride I did with my friend Leslie, from Banff, we proudly did not pay for camping once. I’m 49 years old and I’m still looking for trees for a place to hang my hammock and put my tent. That’s a cool place for me.”

The pandemic has had an effect on all of our lives, along with so many things happening as a society and with our environment. “It’s been interesting, and a different experience for everyone. We are in a bad place as humanity, but there’s always beautiful stories, inspiration,” Hughes said. “I am so grateful to be healthy though.”

“One of great things about the pandemic is that so many people have gotten out on bikes,” she said. “I’m glad to see people making a deeper connection to the natural world. When we witness the devastation from the extraction industry all over this country, I think it’s important that the more people can be outside, they can feel closer to the natural side.” When Hughes rode through British Columbia, she was aghast at the level of destruction from deforestation and the forest fires.

“I feel we go against the flow of nature when we do things to nature in the name of capitalism,” Hughes said. With the pandemic still looming, she plays things day by day in terms of her new adventures, as well as listening to nature as to how she will plan her next trip, given some of the unpredictable weather all over the world.

“I just think that we really, really need to take a hard look at what we’re doing. I can give credit to the Indigenous peoples and communities who have been the original caretakers of this earth, “Hughes said. “In the Interior there is a particular tribe that listened to their elders who said someday this lake bed will fill up again one day so you need to build high and the tribe was able to not be impacted by the floods as they did build high.”

Like all Canadians, Hughes has seen the images of the floods that have decimated much of the B.C. Interior. “My heart goes out to everybody who has been impacted and absolutely you know, when you ride and travel through the land,” Hughes said of the area she knows well. “I’ve walked through the Continental Divide on the Great Divide Trail and bike paths all through all of the mountain ranges from the Continental Divide all the way to the coastal spine.”

Hughes believes that humans need to look more to nature to help guide them in their journeys. When she hiked the Pacific Crest Trail in 2019, she was watching the weather. “It was a big snow year down in the Sierra, and it’s a low snow year up in the North Cascades. So I decided to go southbound on that trail and it ended up being the perfect year to go.”

For now, Hughes will watch the weather, and monitor the situation regarding the pandemic, before her next adventure. But there will definitely be another one. And another one.