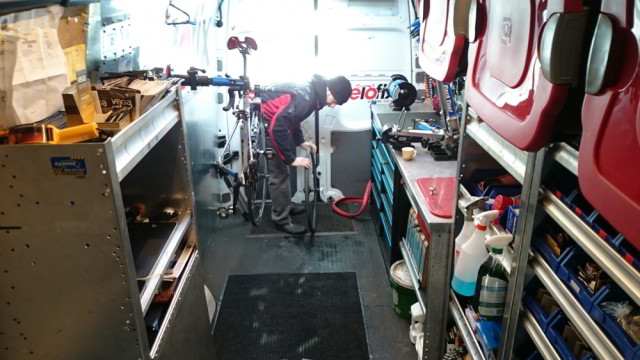 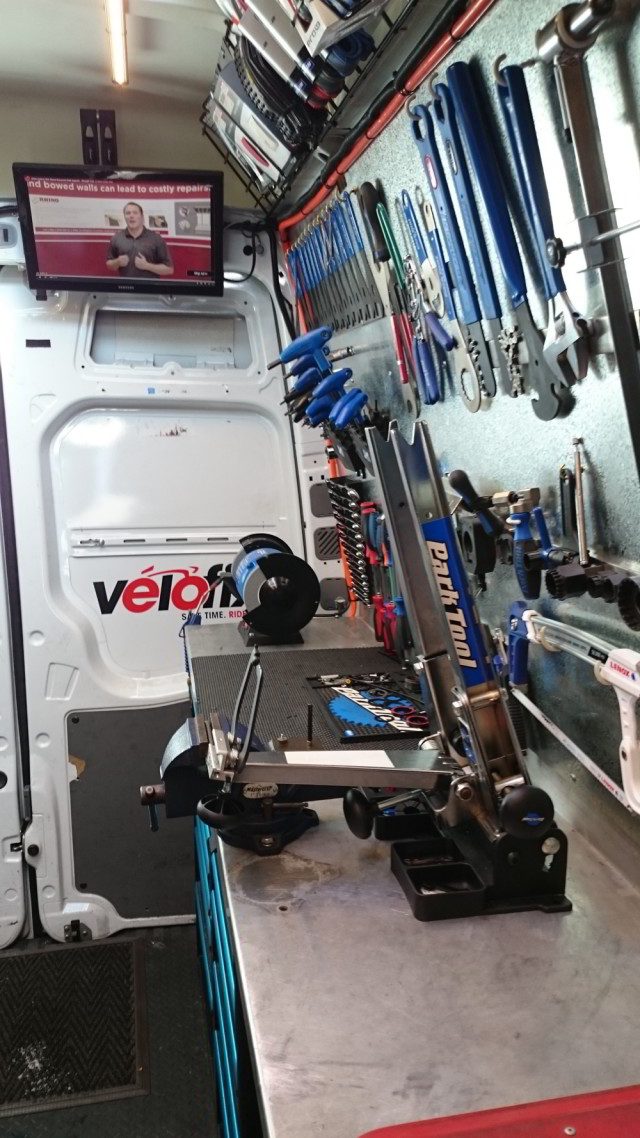 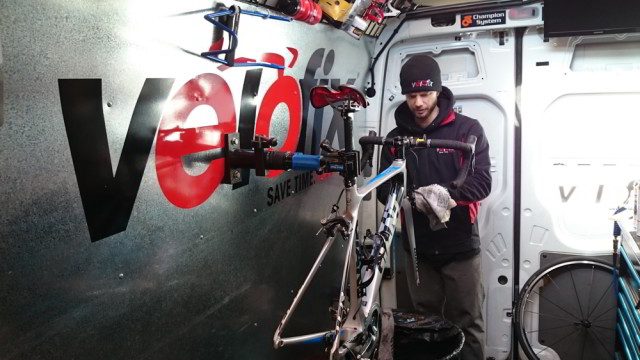 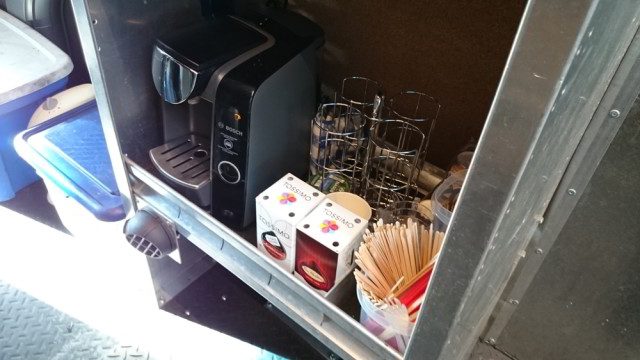 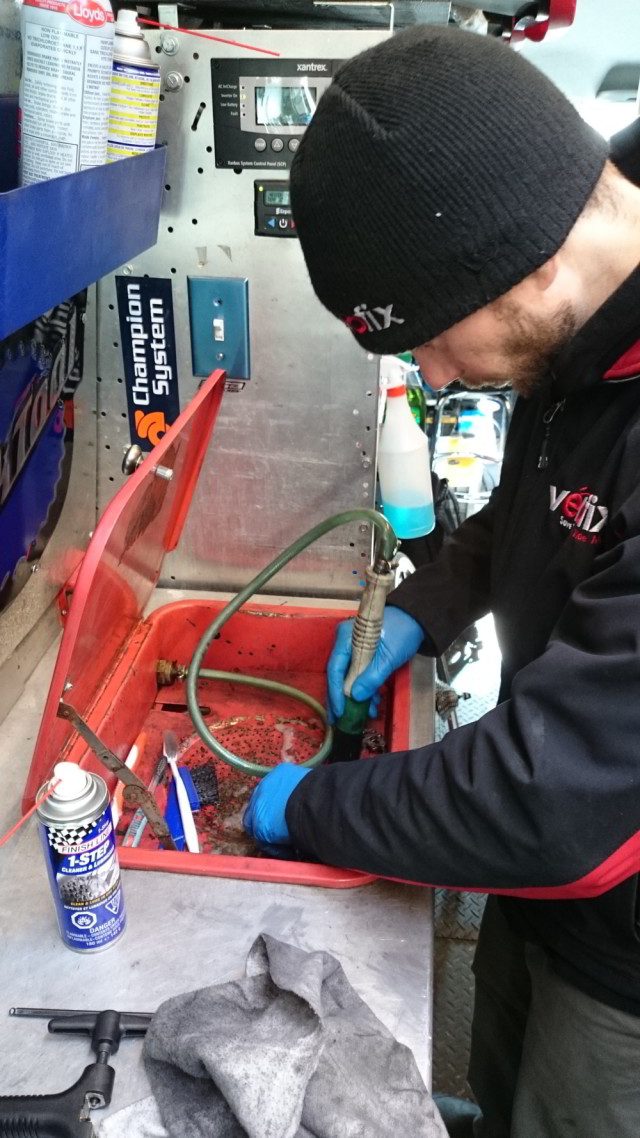 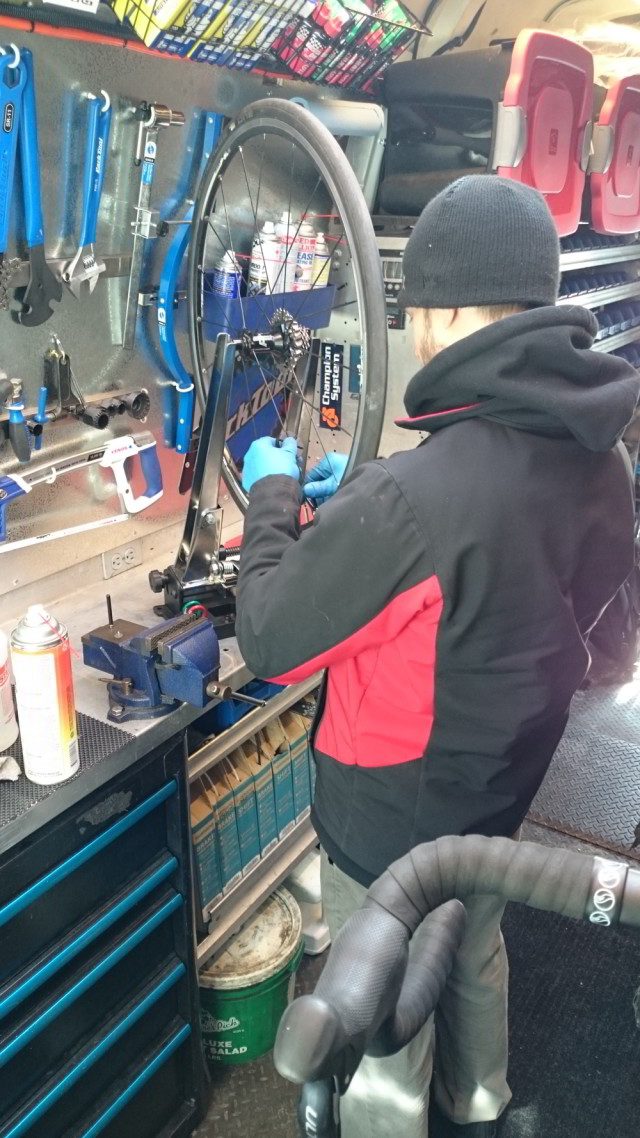 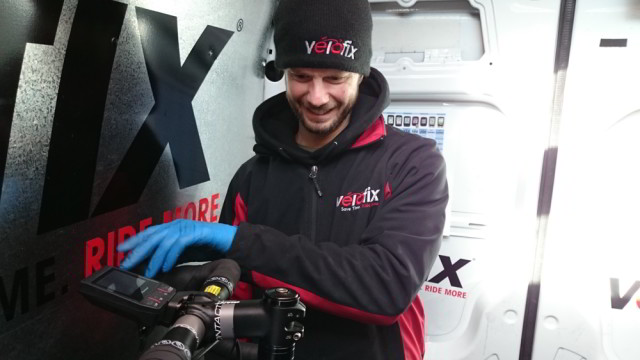 On a cold, very cold, day in February, I got my bike ready for spring. I carried my machine, to keep it out of the snow, to big red truck parked a few step from my home. I knocked on the back doors. Nick Di Cristofaro, Toronto’s first Velofix owner/operator, opened the doors and invited me in.

Velofix is a Vancouver company that’s been growing quickly since it appeared on the streets of Vancouver in early 2013. It was started by two businessmen and bike enthusiasts, Davide Xausa and Chris Guillemet. Boris Martin, a three-time Canadian national track champion and certified master mechanic, joined the pair soon after. Martin drove the first Velofix van around the Vancouver area, making house calls to tune up bikes. Riders liked the service, so the founders added two more trucks. Later, triathlete Simon Whitfield opened the Victoria-based franchise. In November 2014, Guillemot, Martin and Whitfield appeared on CBC’s Dragon’s Den. They were looking for a $300,000 investment to help them expand. They offered 20 per cent equity in the company. Dragon Jim Treliving took them up on the offer. Now there are Velofix vans in Toronto, one in Ottawa and more in the way in Calgary and Gatineau, Que. In February, the U.S. continental team SmartStop announced that Velofix would be providing mechanical support for the team in 2015.

Di Cristofaro found out about Velofix from a Canadian Cycling Magazine article in the August/September 2014 issue. By October, he was on the road with his Mercedes Sprinter van fixing bikes. He’s been involved with bike, both motorized and human-powered, his whole life. He use to race motocross. Later, he became a Red-Seal certified motorcycle technician. He worked at Yamaha Canada as a technical specialist. During that time, he trained and raced on road bikes. About 10 years ago, he switched to fixing bicycles as his full-time job. After working in various shops in Toronto, the ambitious Di Cristofaro wanted to be more than a wrench. He wanted to own his own shop. The cost, however, of setting up a shop was a barrier. The price of starting a Velofix franchise was much more attainable. The fee is $25,000 for a franchise. The truck costs about $55,000, and equipping adds another $40,000.

When I stepped into Di Cristofaro’s Sprinter from the back, his bench and tool wall were to my left. He said men tend to love the tool wall. “I think it looks awesome,” he confessed. The van itself is 24-feet long. There’s about 100 square feet of space inside. Next to the bench were shelves and drawers with just about everything a mechanic would need to fix a bike: chains, cassettes, tires, tubes, cables, housing, bar tape, jockey wheels, brake pads and more. On the opposite, passenger side of the van, there was the the workstand, which is bolted to the wall, a computer running a pro race, which was also displayed on the flat-screen TV mounted up high, and the coffee machine. In a sense, it’s a rolling man cave.

“This space is more than a mechanic would get in a shop,” said Di Cristofaro. He does admit that the common space in a shop gives a wrench a bit more room to move, but this van gives him the most bench space he’s ever had.

For road, tri and ‘cross bikes, Velofix offers three regular tuneup packages. There’s the Domestique (basic tuneup), the Yellow Jersey (major tuneup) and the Paris-Roubaix(full overhaul and tuneup). My machine was going to get the major tune, which gets a full drivetrain clean and lube, full frame clean and polish and wheel truing on the wheel truing stand, plus all the elements of the basic tune.

Di Cristofaro put on some blue nitrile gloves and got to work. The chain came off and got a soak. Di Cristofaro noticed the headset was too tight and adjusted it. All the brake pads looked good. He checked the torque on all the bolts. There was no play at a cranks and bottom bracket. I have a first generation Ultegra Di2 groupset on my bike. Di Cristofaro took a look at the front derailleur. He noticed the set screw, which presses against a pad on the seat tube, wasn’t snugged up properly. That little adjustment made the shifting performance dead on. He also checked the derailleur hanger, which he said is the key to proper shifting. The Shimano-certified mechanic knew all the little details to look for.

He scrubbed the chain and cleaned the cassette. “People always ask me how I get the cassette so clean,” he said. I saw him do it, but I don’t think I could replicate the job. Totally pro.

My experience—hanging out, drinking coffee, talking bikes and learning about the machines—is a common one at Velofix.  If you have the time to hang out with your Velofix wrench, you should do it. You’ll also learn about the reasoning behind any of the mechanic’s recommendations. “If you need a chain, I’m going to show you why you need a chain,” Di Cristofaro. “I do the basic inspection right in front of you and make any recommendations. Then you make the call. I’ll explain that if you don’t replace the chain, the bike is not going to shift well and the cogs will wear down. That’s the No. 1 thing: people like to see what’s going on.”

If you don’t have the time to hang out and learn, Velofix is still the service you need. Di Cristofaro told me a story of a commuter who needed a full overhaul of his bike. The bike was his main mode of transportation and he couldn’t afford any downtime. Di Cristofaro had to replace the chain, bottom bracket, cables and headset. A full overhaul like that takes three to four hours. (“It’s not complicated, just time consuming,” Di Cristofaro said.) The commuter and the mechanic co-ordinated everything beforehand, including ordering the proper headset. The fix went off without a hitch.

Di Cristofaro has another regular customer that he sometimes doesn’t even see. “He’ll say, ‘Hey, I won’t be there. Here’s the garage code. Take the bike. When you are finished, just leave it there.’ I invoice them later,” Di Cristofaro said. Customers can pay by cash, credit and email transfer.

After Di Cristofaro works on a bike, he takes it for a spin. The former racer can definitely put some power to the pedals to make sure everything on the bike is working properly well before its owner needs it for a fondo or a race.

While the Velofix van rolls with parts that will take care of 95 per cent of repairs, there are some items Di Cristofaro likely won’t have on hand. Derailleur hangers, for example, come in too many different forms to stock. Handlebars take up too much space to carry around. He can, however, order anything a bike shop can. If you need a specific part, as that commuter who needed a headset replaced did, you should give your Velofix mechanic that information when you book online.

The booking process is simple. It’s a matter of filling out a form online. You enter your postal code. Then you choose from the dates and times available. The system, which was developed by Velofix, keeps things organized and efficient for Di Cristofaro. The customer only gets to choose from dates and times that he is in the area. The program also prevents double-bookings. Di Cristofaro’s main area is just north of Toronto, while midtown and the east end are covered by other vans. The three work together to make sure they meet all the requests that come in.

Aside from the tuneups, Velofix mechanics can do everything from gluing up tubulars (a multi-day process that’s not done onsite) and box up a bike for your trip. “You can rent a bike box online. I’ll come by and bring you the box. If you have your own box, I’ll pack your bike up. I can tune it up if you want a tune up on top of that. Then, away you go. When you come back, I’ll unpack it,” Di Cristofaro said. The major tune up I got takes one and a half hours to two hours and costs $89. The basic tune takes one to one and a half hours at $69. The overhaul will run you $189.

On that cold day in February, Di Cristofaro’s van was silent except for the whir of a heater. It was powered by four deep-cycle marine batteries. He charges them at home, and then they provide him with enough power to run things, such as the LED lights, throughout the day. The van also has a skylight to let in the sun. The mechanic uses a citrus degreaser to clean parts. The liquid is then recycled. Di Cristofaro made a pretty convincing case for the eco advantages of his service. “We’re cyclists trying to be easy on the environment. A lot of people would say, ‘Oh, you’re driving a diesel truck.’ But it’s a BlueTec diesel Mercedes-Benz truck, which is really clean running. And, we’re actually saving fuel because the people getting the service aren’t driving to the bike shop to drop off and pick up. We do one trip. And, because our booking system is so efficient, we’re driving only five or 10 minutes at a time.”

Not long after Di Cristofaro worked on my bike, he had his first event of the season: he was at the Toronto bicycle show. This spring, he’s been a fixture at a local criterium series run by the Midweek Cycling Club. He is also planning to be at the club’s weekly learn-to-race clinics. I spotted Di Cristofaro’s truck this past fall at cyclocross race. Riders who find their equipment going to hell at Hell of the North on Sunday will be able to find Velofix support. Di Cristofaro’s not just at the races. Charities rides—Friends for Life Bike Rally, Ride to Conquer Cancer—and gran fondos are on his event calendar this year.

With all that Di Cristofaro is up to now and later this season, I’m glad I got to see him in freezing February. When I stepped out of his van that day, I had a bike all ready for spring. It was clean and shiny. I was extra careful not to let it touch the snow.