Introducing new technology to the closed ranks of professional cycling isn’t always easy. While the top pros are always looking for an advantage, lighter, stiffer parts, they are warier of big changes. That is part of why, years after widespread acceptance by mountain bikers, tubeless tires are still a rarity in the pro peloton.

On Israel Start-Up Nation, the Maxxis sponsored WorldTour team, though, that is starting to change. While the team lets riders choose what equipment they use, the faster rolling resistance and better flat protection have proven hard to ignore. ISUN’s Canadian mechanic, Andreas Bäck-Watt, shared why, given the choice, more and more riders on the team are choosing Maxxis’ High Road SL over the many tubular options they have available to them.

Tradition vs technology – the science of speed

Road cycling is a sport steeped in tradition, from classic races to the unwritten rules of the peloton. Sometimes, though, these traditions change. Steel frames gave way to carbon fibre. Toe straps to clipless pedals. Cables to wires and hydraulic brake fluid. Maxxis is looking to disturb one of the last technological holdouts in the peloton: the tubular tire.

“It is impressive that tubeless is starting to be used because it takes a long time for things to change in cycling, especially in Europe. It’s very traditional,” says Bäck-Watt. The lighter rims and better performance in the case of a flat do still provide some advantage for tubulars, he adds, but tubeless is making inroads.”

The reason is the same for those other changes. Performance.

“I’m really enjoying tubeless this season, it’s come a long way in the last few years,” says Guillaume Boivin, who likes the feel and grip of tubeless. “I really like the grip, the feel and rolling resistance. The clincher sits quite well on the rims. It gives me a nice more round shape and confidence in the corners.

Converting to tubeless, one rider at a time

Bäck-Watt says the choice between tubeless and tubular is open to the rider but often divides along predictable lines.

“Certainly the guys that understand more about the performance side, about rolling resistance and we find a lot of our TT specialists are the ones using tubeless the most,” ISUN’s head mechanic said. “We have some guys who will use it pretty much every day now. Our TT guys who know more about equipment, they were the first to say ‘yeah, I want tubeless.’ Whereas guys that are more traditional have been pretty wary, it’s something new and they’re not used to it. But it’s definitely the guys that know more about the bike itself that are interested in it.”

The advantage isn’t just what the riders feel, though. At the start of the year, the team’s own testing and independent testing both showed Maxxis’ tubeless High Road SL tires had lower rolling resistance than the tubular options.

“We do some track testing earlier in the season on the velodrome,” says Bäck-Watt. “We’ll also send our wheels with different tires off to independent rolling resistance labs so we get a good idea of what we’re using. The Maxxis’ have been testing really well.”

Those lab numbers translate to the real world, too. “What [the riders] tell us is that it feels super fast,” Bäck-Watt says of the High Road SL. “The guys really like it on flat fast stages because the rolling resistance is so much lower. That’s when we see the biggest advantage.” 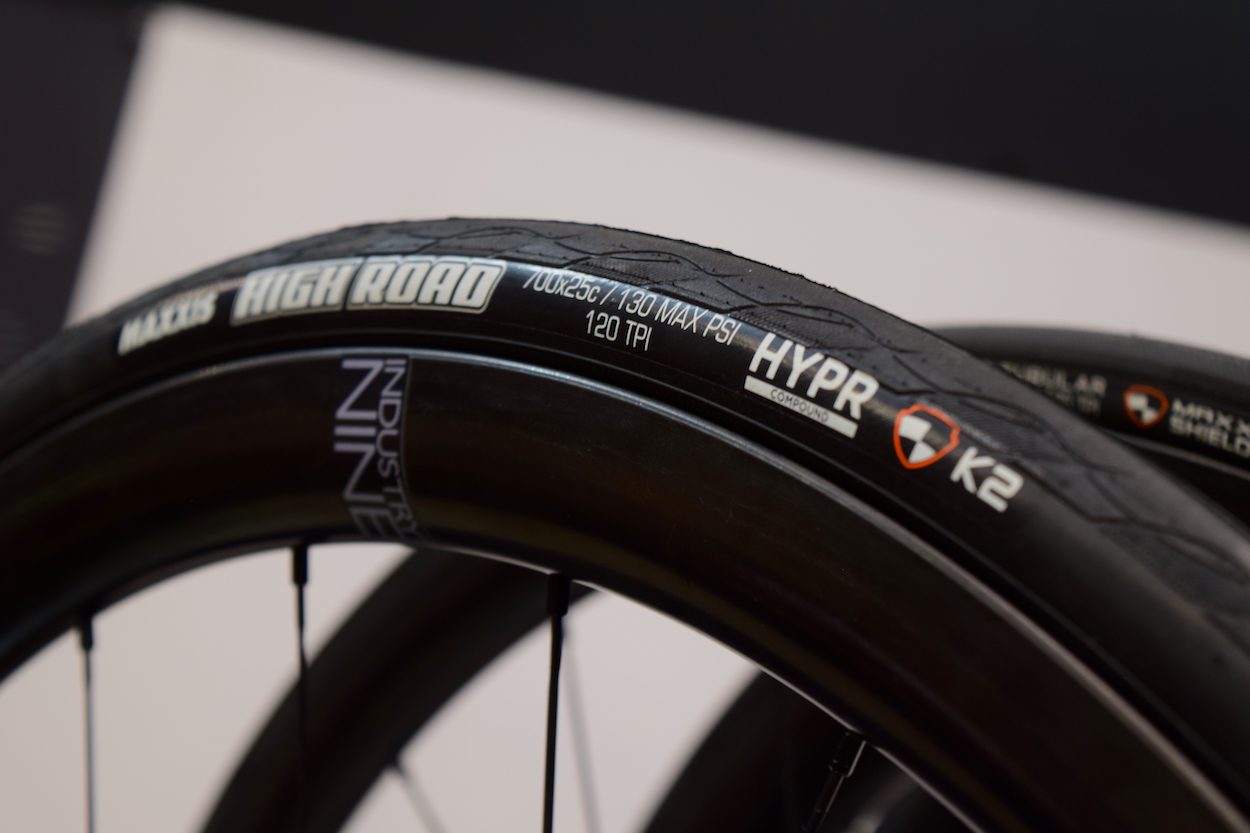 Change doesn’t come easy, and Maxxis has worked hard to earn the gradual acceptance of tubeless in the peloton. This includes extensive prototyping and feedback from ISUN riders.

“Other big tire manufacturers don’t really listen to you, they just give you the tires and that’s the last you hear from them. Maxxis, they’re talking with us all the time, They’ve been amazing with their communication back and forth, developing and listening to us and to the riders,” shared Bäck-Watt. “Before we got the tubeless High Road SL, we had quite a few different prototypes as they were developing these”

His appreciation is echoed by two of ISUN’s Canadian riders, Alex Cataford and James Piccoli.

“I did a degree in physics, so tire pressure is something I’m into,” says Cataford. “Maxxis is always on the cutting edge, and take our feedback really well. They’re great about developing new things.”

“I am an engineer at heart, so I do like tinkering and talking about equipment,” adds Piccoli. “I’m really interested in the development of tires. In the last couple of years, teams have been paying more attention to tire development, they’re realizing that the right compounds and construction actually makes a big difference.”

“Maxxis are very involved with them in terms of new product development and they’re very receptive to our feedback,” said Piccoli, “which is honestly the most you can ask for from a tire sponsor. We love their stuff.”

The High Road SL is the first product of that feedback, though both the riders and Bäck-Watt hinted that more is on the horizon, on top of Maxxis’ extensive custom tubular options made exclusively for ISUN’s use in the Classics as well as one-off runs of tires just for Paris-Roubaix and the gravel of Strade-Bianchi.

From the WorldTour to your garage

While some pro-level customization, like race-specific tubular tires, will never make it beyond the team, tubeless is a technology that trickles down to consumers much faster. Maxxis’ High Road SL is already available to riders here at home.

Bäck-Watt says Maxxis clearly had consumers in mind throughout the development process.  While rider feedback focused on speed, “They even want to know from the mechanic’s side how was it to mount these tires, was it easy enough,” Bäck-Watt says. “That was quite nice, they’re actually thinking about the fact that people have to mount these too.”

Tubeless tips from a pro

When I talked to Bäck-Watt, he was working through the final bike set-up the night before the Vuelta Espana started. With each rider having multiple bikes, spares, and enough wheels to survive 21 days of racing, that is no small task. The click of wrenches and the whir of freewheels in the background soundtracked our conversation. As the head mechanic for Israel Start-Up Nation, I asked Bäck-Watt if he had any tips for setting up tubeless tires. For those of us who don’t have a pro-level mechanic on call, here’s his advice to make setting up tubeless easier.

1) Remove the valve core and use a compressor

Once the tire bead is seated, it will stay in place. You can add sealant and re-install the valve core and re-inflate the tire. “Everything’s much cleaner that way. That’s how we do it, anyway.”

“Some of our time trial rims are really wide, for the aerodynamics, and that makes it harder to seat a smaller tire. But that’s only an issue with really wide rims, and you can fix that by using a wider tire.” The team usually uses 25c High Road SL’s, while Maxxis offers the tire in widths up to 28c.

One big advantage of tubeless is the freedom to run lower tire pressures without worrying about pinch flats. This improves rolling resistance, letting tires carry speed over rougher surfaces.

“On the road, we’ve discovered how low we can go with pressure with the tubeless. That’s a huge advantage of tubeless, and one of the reasons why the guys were using it in Flanders. You can get away with 3.5bar which, normally we’d be running 7.” For those of us working in metric, that’s a massive change from 100 p.s.i. to just over 50.

As cyclists, we often spend thousands of dollars chasing lighter-weight components and better performance. With tubeless, all you have to do is goop a bit of sealant into your tire to get faster rolling resistance and better flat protection. It offers enough of a performance advantage to convince WorldTour pros to turn away from tubulars, and tradition, which is impressive for a product already available to your average consumer.