In early September, a Canadian cyclist whose name many were probably not very familiar with broke the 200 m track sprint world record at the 2019 UCI Pan American track cycling championships in Cochabamba, Bolivia. Kelsey Mitchell proved the performance was no fluke when she went on to win the gold medal in the sprint and team sprint at the competition. The former university soccer player has enjoyed a meteoric rise in the sport. She’s only been riding a bike competitively since December 2017. Mitchell is now a member of Cycling Canada’s high-performance program and she’s paving a pathway to the 2020 Tokyo Olympics. At the 2019 Canadian track championships, merely a year after Mitchell first proved she was a force to be reckoned with at the 2018 nationals, Canadian Cycling‘s Kevin Mackinnon caught up with the 25-year-old from Sherwood Park, Alta..

Kevin Mackinnon: So what’s this journey been like for you?

Kelsey Mitchell: This summer has been crazy. My first big race was nationals last year. To come back here and feel so much more comfortable, to know how to warm up and know how to ride a bike, I still have so far to go but I have come a long way.

How did you end up here?

So I played all the sports from gymnastics to ringette to basketball to soccer and so I was always an athlete. I was never technically strong in any of the sports but I had the athleticism. I played soccer at the University of Alberta and at NAIT [Northern Alberta Institute of Technology] which is a smaller college in Edmonton. I finished my five years and a lot of people when they finish decide to move on in their life and be done with sports. I did not have that feeling at all. I knew it wasn’t the end for me. I did the RBC Training Grounds and Jesse Korf [pathway development manager with Cycling Canada] scouted me and got me on a bike. I did 1,300 watts and he wanted to pursue me. In the beginning, I was so bad on the bike. I was not a natural at all. I had raw power and zero talent. So it was a really long process. I hated being bad at it. It took time but it’s all coming together nicely.

My guess is because you are as good of an athlete as you are, your version of bad wouldn’t be the same as everyone else’s?

I never biked. I hadn’t owned a bike since I was 12  so it was all so new. The bike was so frustrating for me beause I would be going as hard as I could and I wouldn’t be going as fast as other people and I wanted to get better. There is so much to it: handling the bike and learning how to pedal properly and exerting all my energy at once. It took a long time to get good. Now it is all starting to come. Down in Bolivia, it was a big turning point for me where I realized, I’m here now. I need to keep pushing and see where I end up.

Was it just a desire to be really good at something that drew you to cycling?

I started cycling in November in Edmonton so I was inside on the rollers just sitting there spinning and I didn’t know if it was for me. I like working hard, pushing my body. I love everything that goes with the training. I started going on the track and getting faster and faster and that’s when I thought that this was something I loved. Soccer is a team sport. You work together toward a team goal. You are only as strong as your weakest link. Here, it’s individual. You are out there by yourself. If you are having a good day you will do well and if you are having a bad day, nobody will pick up your slack. I have always been a team-sport athlete so to transition to an individual sport has been tough. But now I am starting to really love it. Being out there pushing myself, holding myself accountable.

After all that happened in Bolivia, did you have to stop and take a deep breath and think, ‘How did this happen?’

So I set the record and then I knew there were four or five girls who were fast going after me so I just had to wait and see if they would beat that record. Nobody did it, so I was super excited. But I then had to refocus because there was a whole sprint tournament to go through. I was more pumped that I was able to win and back up that sprint in the end. It was when I got back that it sunk in that no women had gone that fast before.

All of a sudden, through cycling the Olympics are becoming a possibility. Did you ever imagine that playing soccer, that you’d now be gearing up for the Olympics?

I knew my soccer career was pretty much done. If you are not scouted at a younger age into the national program it’s not happening. So I remember telling people that I would try and go to the Olympics for cycling. They would ask if I even cycled and I told them I would start. They were skeptical that I could pick up a brand new sport and make the Olympics in two years. Hearing them say that, it sounded a little ridiculous but now it’s possible. I had a dream and I had a path of how to get there. So now I just need to do it.

So, what more do you need to do now?

Lots, I have lots to do. I know I can get stronger in the gym, stronger on the bike. My racing tactics have to improve. Everyone I race against is going to have more experience and I know from my own experience that someone who qualified faster can still be beaten by someone who is 4/10s of a second slower. I just need to learn how to race more. I need more experience.

How supportive has Cycling Canada been?

They have been amazing. I didn’t own anything. I didn’t own a bike. I didn’t have skinsuits. When I started in Edmonton I rode with Juventus and they loaned me a bike and gave me two skinsuits I rotated through. Then, when I got into the program, Cycling Canada got me on a new stiffer bike that fit me really well and they gave me a bunch of skinsuits. The support system from everyone, my strength and conditioning coach to the head coach, everyone is super supportive.

What would it mean for you to get to the Olympics?

What do your family, friends and former teammates think of all this?

My friends and family are the most incredible people in the world. I have at least eight family members coming to the Milton UCI track cycling World Cup [Jan. 24-26, 2020]. They have already booked their tickets. I have friends coming. I have a group chat called the Skinsuits where I update them and they are hyping me up. I have old teammates who tell me I am living their dream. Everyone is just so incredible and I definitely couldn’t do it without the support system that I have. 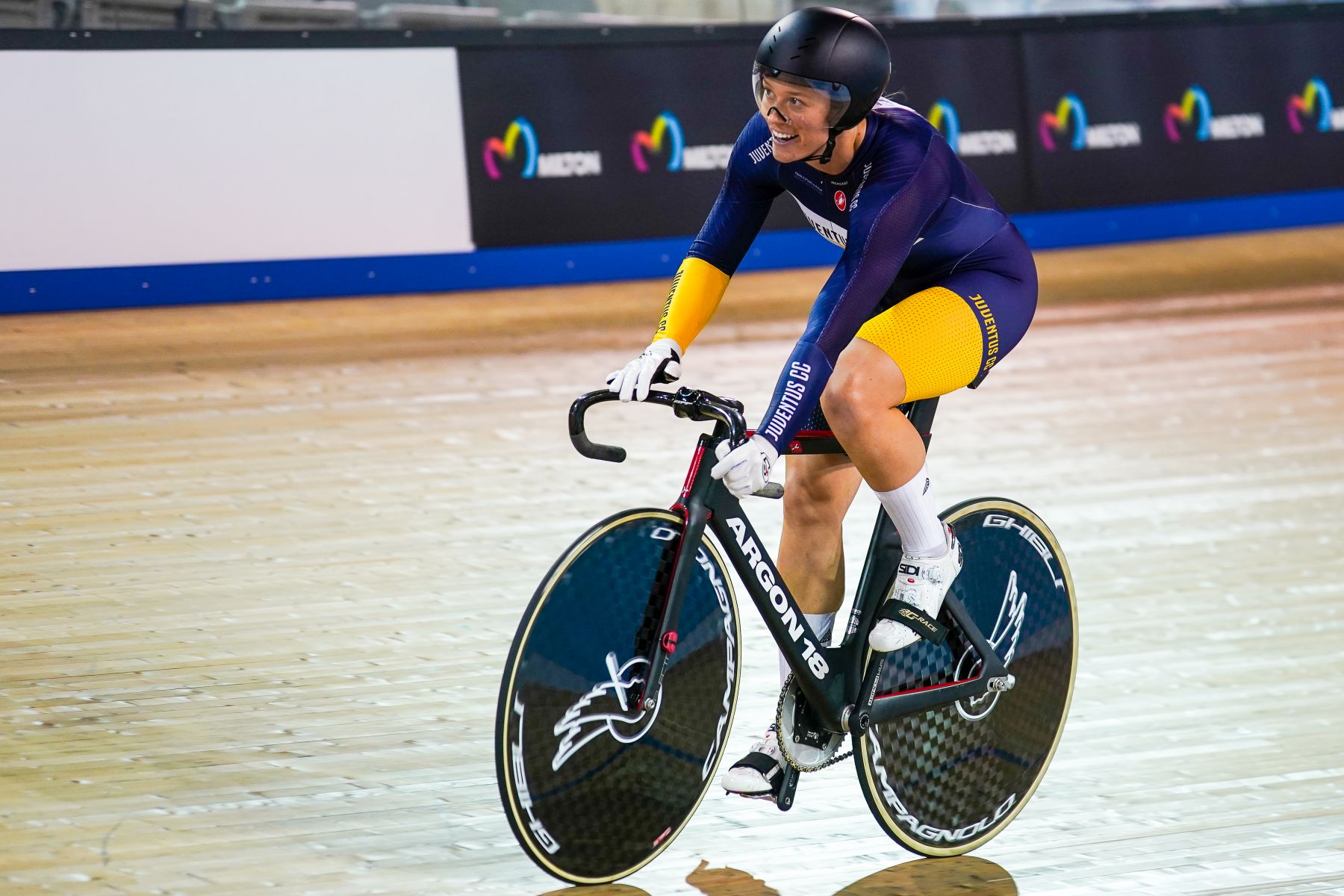 If you had not gone to that tryout, what would you be doing right now?

I would be working 12-hour shifts at the Suncor refinery in Edmonton. That’s what I would be doing. Great job and I loved people there but you can’t beat this. I am literally living my dream in sport, travelling the world representing Canada.

What’s it going to be like to have a bit more pressure? You were the new kid on the block but now you have a Pan Am gold medal and a world record.

I have definitely thought about that a lot. The sport is so mental if you don’t have the right mindset you’ve lost the race already. I am going to go in with the same mindset, I have so much more to prove. I am excited to go to World Cups and worlds and hopefully the Olympics and show them it was not a one-time thing.