One month ago Chris McGarrell hadn’t ridden a bike since he was a child. Today he’s the leader of a rapidly growing cycling club, Man Dem CC—he’s more surprised than anyone at how it all happened so quickly.

In early June McGarrell was feeling down—people close to him were being laid off, gyms were closed, the pandemic continued and racial tensions were high in American and Canada.

In the height of all of this, McGarrell got word that a friend of a friend had just bought a bike. The idea of getting into cycling piqued his interest and he went out to look for a bike himself. He ended up driving two hours out of Toronto to find a shop that had bikes in stock, and decided on a Specialized CrossTrail with hydraulic disc brakes.

“I started riding randomly with a friend,” says McGarrell. “It felt really good to be on the road, with the wind and nature. After a couple of rides a few of my boys said ‘I have a bike too, we should ride together.’”

Their first ride consisted of eight friends and one rider who vaguely knew a friend of a friend.

McGarrell casually posted about the ride on Instagram and received an unexpected number of responses. “People were like, ‘hey what’s this?’” Says McGarrell. “They started sharing it on their pages too.”

On the second ride four women and more second degree acquaintances showed up. McGarrell realized the rides had the potential to become something big.

As one of the only cycling groups whose membership actually represents the diversity of Toronto, it was only appropriate to call the club the most Toronto name possible—Man Dem Cycling Club.

“Man Dem is Toronto street slang,” explains McGarrell. “It’s a patois slang we use. It’s not really gender specific, people at first got the impression it’s just for guys but that name was just inspired from the immediate circle that made the choice to start this.” 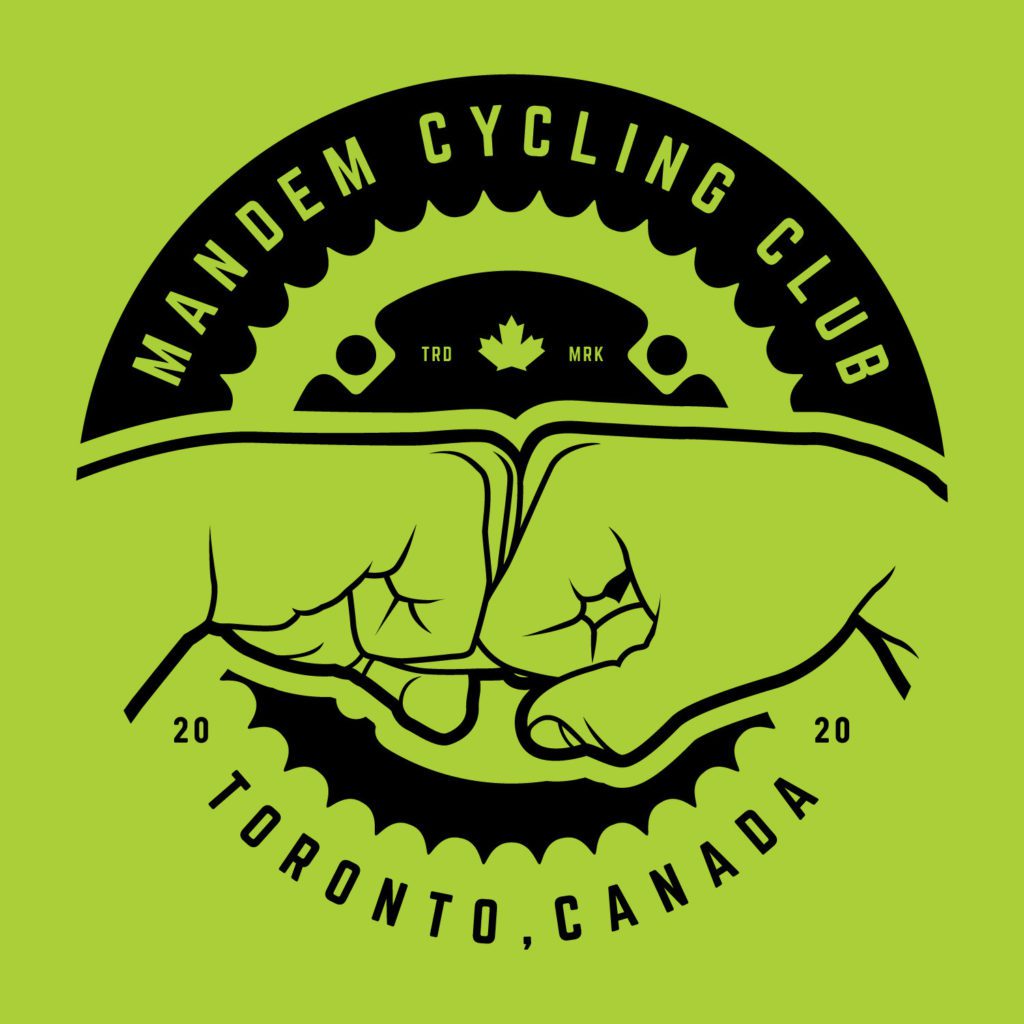 The Man Dem CC Instagram now has more than 1,300 followers and their weekly rides have exploded in size. “I’m originally from Scarborough and a lot of my friends are from Scarborough,” says McGarrell, “but we bounce around all over the place taking advantage of road closures and ActiveTO.”

He says that the group is taking advantage of the cycling space that the city offers, because a lot of the group is new to the bike paths. Many who join for the rides are new to cycling as well. “We don’t care what bike you have, what jersey you wear, none of that stuff is important.” says McGarrell. “If you have two wheels come out and ride.”

The inclusive nature of this club seems intuitive, but from within the cycling world—where there are unspoken rules, equipment requirements and countless other barriers to entry—Man Dem CC is a refreshingly open group. Anyone can, and does, show up to their rides.

“A lot of people look at competition environments and they feel like they need to have that equipment to bike,” says McGarrell, “but we’re proving that you don’t have to be able to afford that just to ride.” He says that cycling definitely feels very elitist.

Melissa Doldron, who rides with Man Dem, says that the club is important for visibility and inspiring for others looking to get into the sport. “Groups like Man Dem showing up for more urbanized communities and racialized people just show the power of what a bicycle can give,” she says.

McGarrell reminisces about riding to the corner store with a group of friends as a kid with no worries at all. He feels like the Man Dem rides replicate that liberating feeling.

As a new cyclist there have been a few moments of learning for him— “the first few rides I didn’t wear a helmet,” he says, “a few local clubs reached out said ‘I love what you’re doing you should lead by example.’” He took their advice and now advises all riders to come equipped with a helmet, bell, water and a snack.

The rides are more planned now than they were at the beginning. The group has started to break into a few separate groups as some riders get faster and enjoy pushing a little harder. McGarrell says it’s not an issue though, as there are a few pre-determined regroup points, and everyone knows the final destination.

Man Dem has yet to encounter any of the bureaucratic issues some larger cycling clubs deal with. For now, “If you have two wheels come out and ride,” is as inviting, non-exclusive and simple as it gets.

Volume VII in the books! THANK YOU to everyone who dedicated their morning to riding with us today. The scene at the Fountain of Youth today was second to none. 50+ bikes, amazing atmosphere and arguably one of the best lakefront rendezvous spots in the city! Those of us that stuck around until the end, enjoyed some popsicles and then hit up @edsrealscoop on Queen Street for some of that frozen goodness 🍦• Shoutout to all the newcomers this week especially the crew that rode in all the way from SAUGA!! I hope everyone enjoyed themselves! 👊🏾• #ManDemCC #RollWithTheManDem #Cycling #TheRighteousWay #ActiveTO #BikesAreFun #CyclingToronto

The first month of Man Dem has been full of notable moments and new friends. McGarrell talks about how inspiring it was to ride with Matt Cuesta, the cyclist who rode 46km for 46 days in honour of George Floyd. He also mentions an older white woman who stopped the diverse group of cyclists in a park just to tell them that she loved what they were doing.

RELATED: What one rider’s #46forGeorge campaign did for a community

McGarrell says the club has changed his life. “One of the best takeaways for me was one of my closest friends (who didn’t have a bike 30 days ago) went from not riding at all to doing 60 km a day,” he says. “That’s been really cool to watch, seeing friends inspired to get out there.”

The club continues to grow and McGarrell can’t wait to see what his second month of cycling holds. “Whether you’re Black, white, Filipino, whatever sexual orientation, men, women—if you have two wheels, let’s go on a bike ride and enjoy Toronto.”