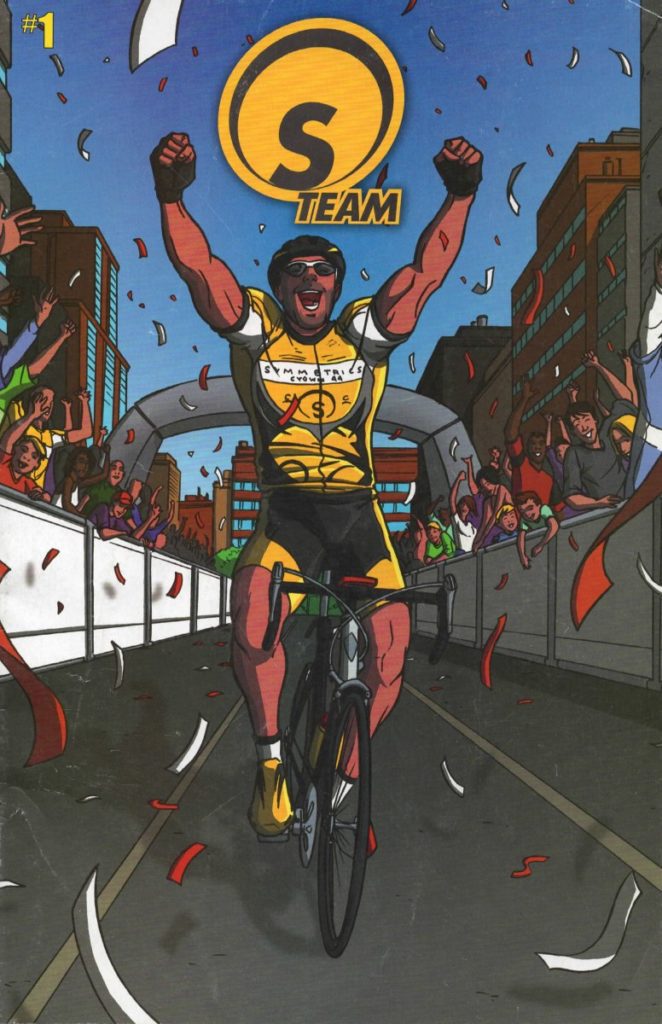 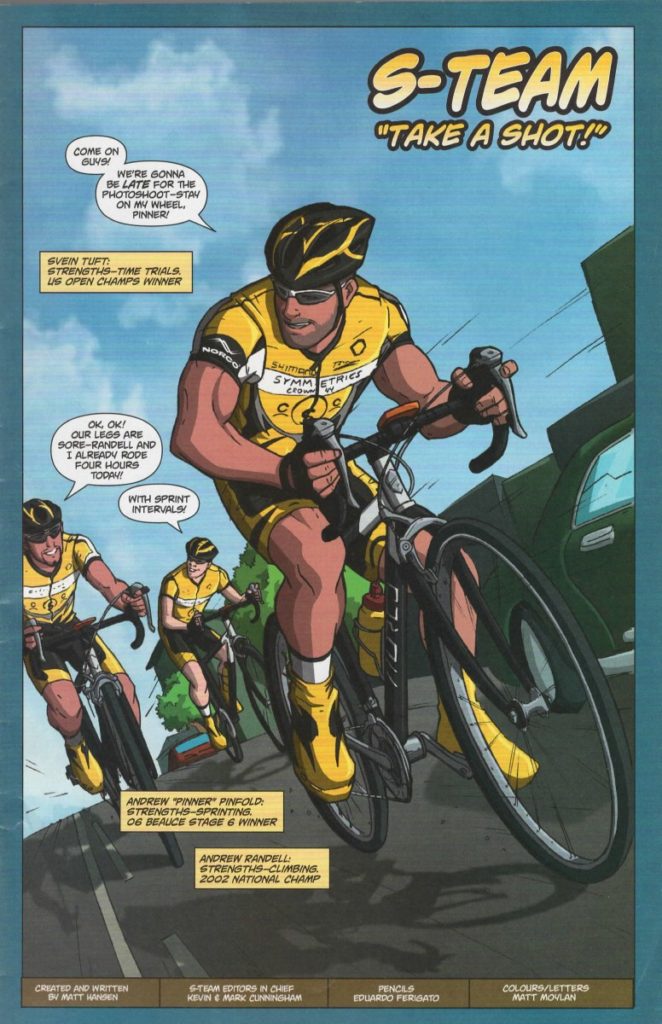 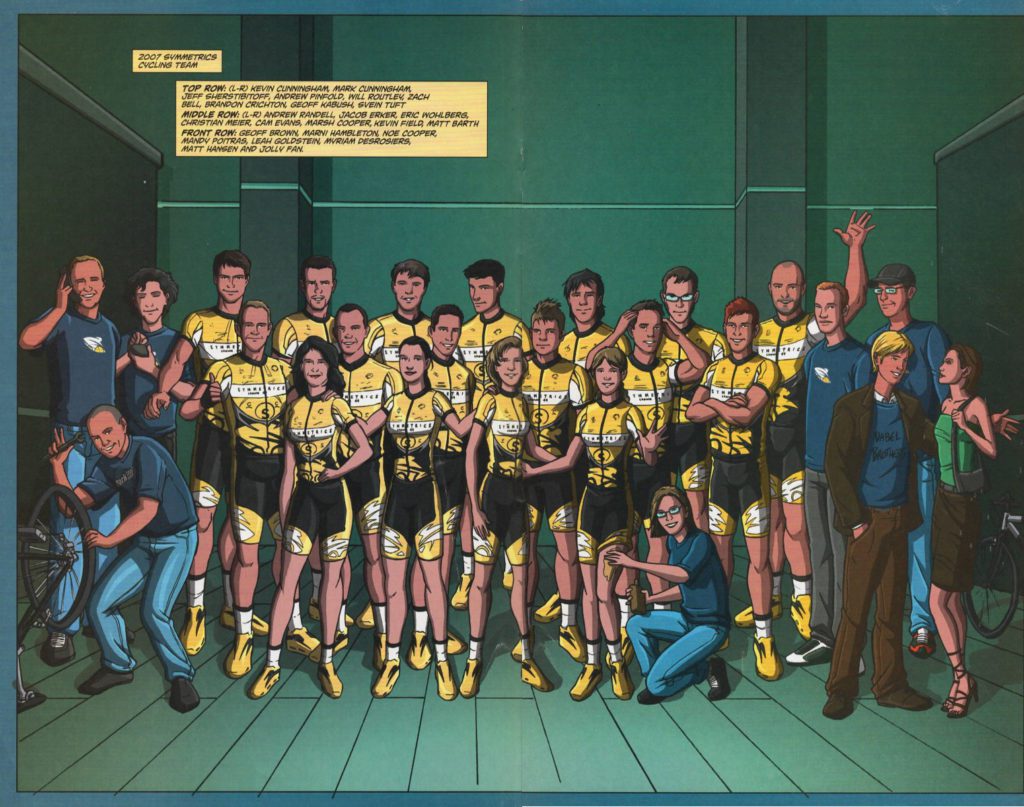 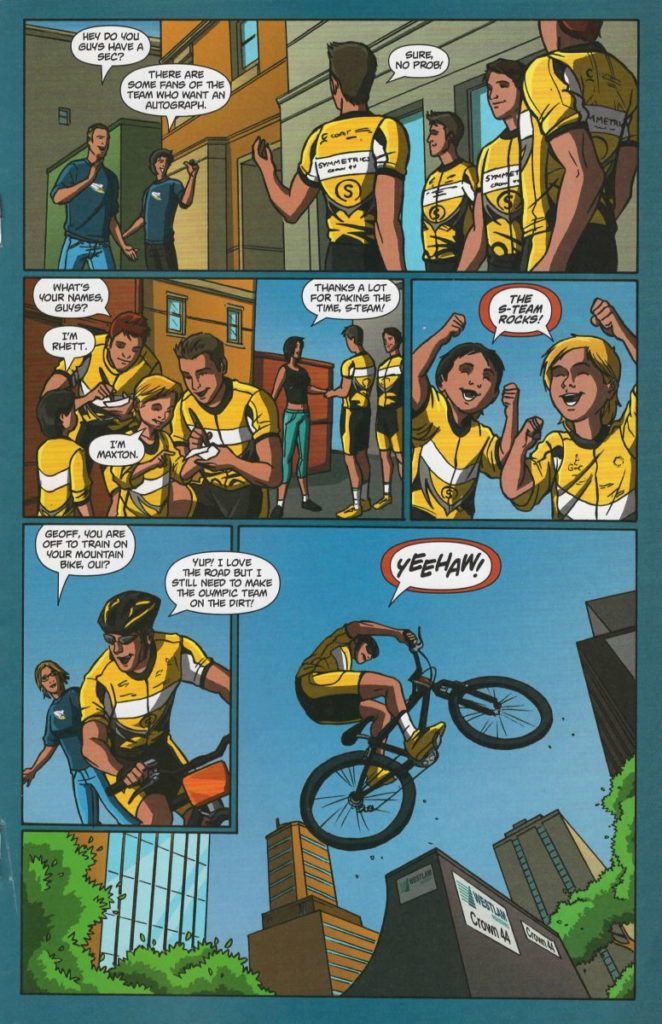 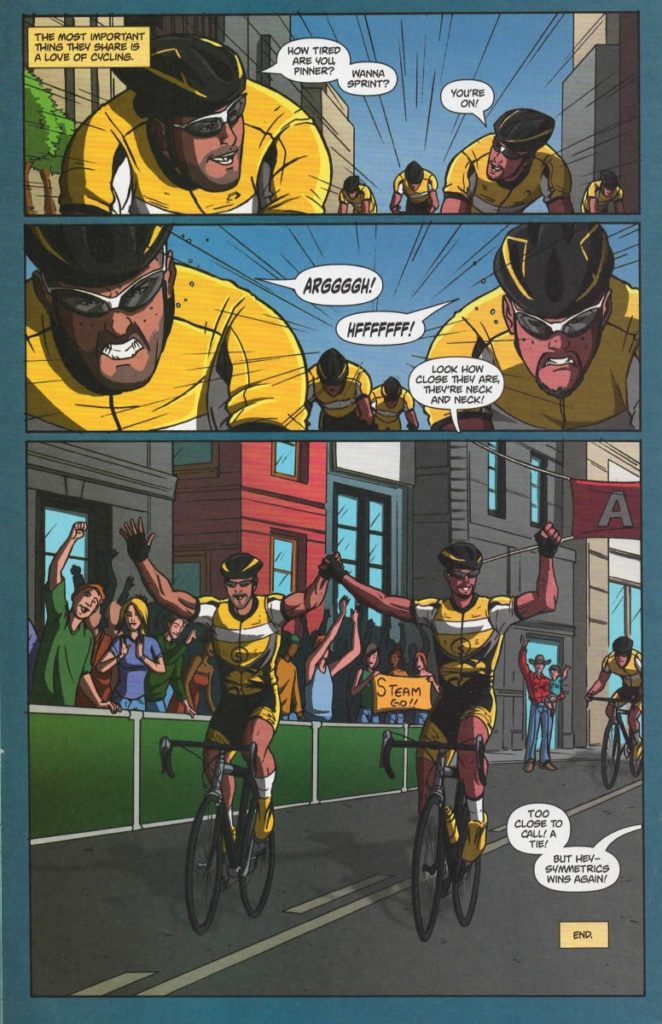 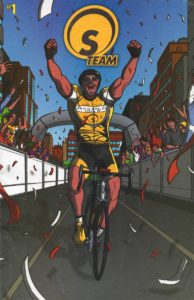 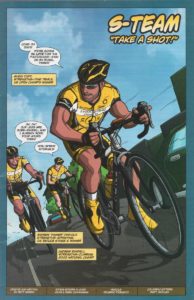 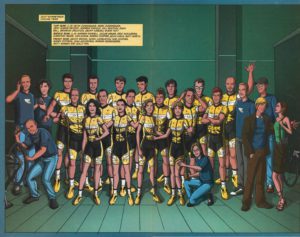 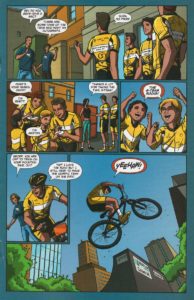 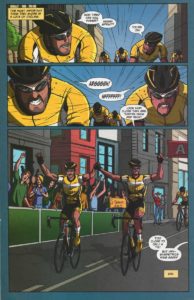 “If you’re in a bike shop and Svein Tuft walks in, it’s like seeing Captain America. Or if he showed up on your group ride, it would be like riding with a superhero. So, it’s wasn’t that big of an extension,” said Matt Hansen, the creator of the Symmetrics Pro Cycling Team comic book, S Team.

Symmetrics is a Canadian continental team that ran from 2005 to 2008. Hansen, a comic book editor and former bike racer, knew the team principals, Kevin and Mark Cunningham, and pitched them on the idea of creating a comic book for team. It would be the main marketing material for the team and its sponsors, which included Shimano and Norco, in 2007. Kevin Cunningham got behind the project. Hansen scripted the story, drew early sketches and recruited artist Eduardo Ferigato for the final images. In June 2007, copies of the comic made their way to bike shops and schools.

The comic has a loose story. It opens with Svein Tuft, Andrew Randell and Andrew Pinfold riding in a hurry to a team photo shoot. They’re late. When they make it to the shoot, there’s a two-page spread with everyone involved with Symmetrics. There are riders such as Zach Bell, Eric Wohlberg, Ryan Anderson and Geoff Kabush. Geoff Brown, who has been wrenching for Slipsteam Sports (Cannondale-Drapac) for years, is there as the Symmetrics mechanic. Hansen is in the “team photo,” too. His comic-book self is speaking with a woman, listed as a “Jolly Fan,” who doesn’t seem too impressed. “That’s supposed to be Angelina Jolie talking to me,” Hansen said. “Originally, it was supposed to be Paris HIlton, but she was arrested around that time.” The comic presents the cycling heroes as role models who keep fit and compete fairly. A celebrity with a recent arrest for drunk driving wouldn’t have fit with the team’s image.

While the run of the comic was roughly 15,000 copies, it’s pretty hard to find 10 years later. Hansen himself can’t seem to find his copies. Randell can’t find his. Tuft, who rides for Orica-Scott and is based in Andorra, thinks he has some copies in Canada. The images above come from a copy generously lent by Kevin Cunningham. 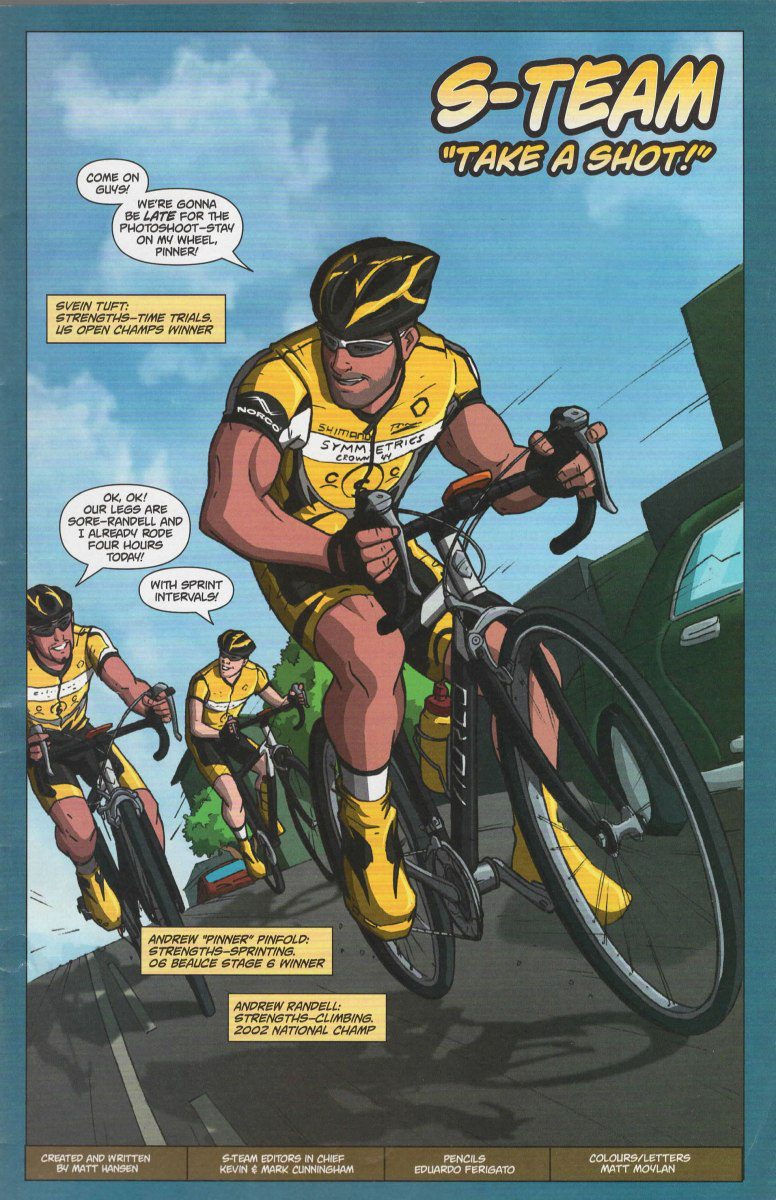 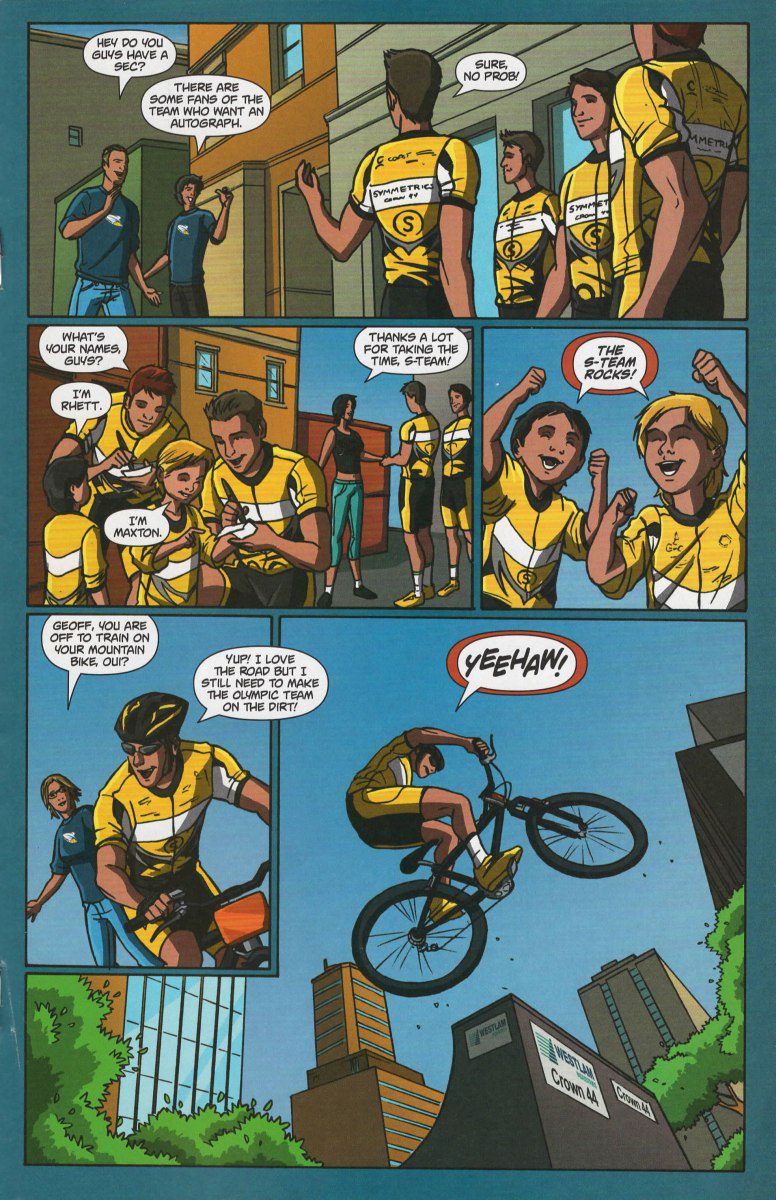