2020 was full of twists and turns. This non-traditional year has prompted some unexpected trends in media, culture and sports. The world of cycling adapted to the unprecedented year, figuring out the new normal for these trying times. Just like the phrases in that last sentence, you’ve probably seen these trends all popping up over the place this year.

The basic idea of Everesting, climbing 8, 848m—the height of Mount Everest, leant itself very nicely to solo, COVID-safe riding. There are too many Everesting stories from this year to list, but highlights include Everesting on Everest, single track Everesting and numerous record breaking rides (including Canadian records).

From May to July this summer, Google searches for the challenge skyrocketed. Strava’s Year in Sport also showed a similar increase in Everesting rides. 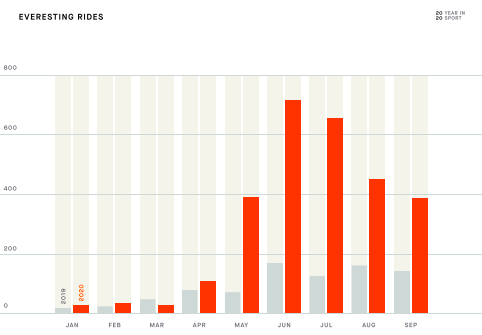 The popularity of indoor cycling came as no surprise in 2020, but when the lockdowns forced many cyclists to stay unexpectedly inside, the already rapidly growing space exploded. Many professional cyclists, who normally live and train in countries where they can ride outside year-round, set up their first indoor trainers this year. 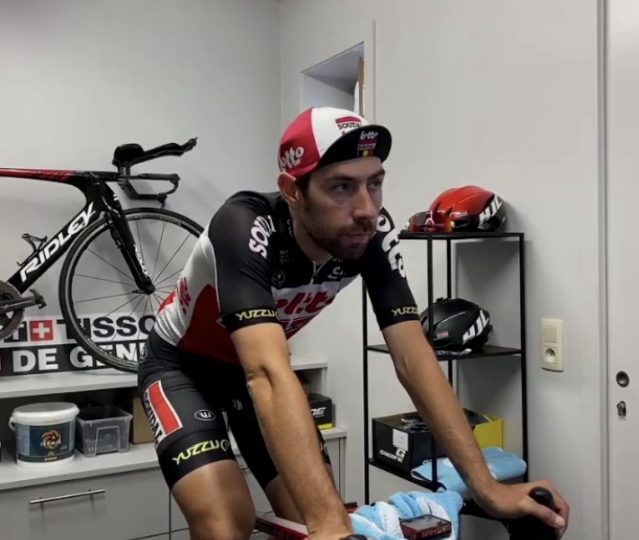 The results were interesting, with some pros adapting quickly to virtual racing while others wrestled with connection issues and internet drops. But by the time the esports world championships came around most of those competing had managed to dial in their setups.

The age of cyclists tends to skew slightly older, so it’s not surprising that there aren’t a huge amount of cyclists creating content on Tiktok. Even then, the “best” TikToks that have also leaked onto Instagram reels and into the feed of anyone who interacts with cycling content. They consist mostly of uninteresting videos of cyclists putting on layers of kit and riding local roads with popular songs as a soundtrack.

There are a lot of creative cyclists so it’s surprising there aren’t more interesting cycling videos blowing up on platforms.

This year bikepacking became more feasible for the many cyclist who recently bought adventure-ready gravel bikes. In other years, a bikepacking adventure might mean packing up your bike and flying somewhere new.

With travel off the table, in 2020, many Canadian cyclists took the restrictions in stride and stayed local, setting off from home on their multi-day bike trips. Routes like the the BT700 were great options for those practicing social distancing who still wanted to discover what their province has to offer.

If you considered yourself a cyclist in 2020, it’s likely you’ve had at least one person ask you about getting into bikes this year. Cycling is a very pandemic-friendly activity (you can exercise outdoors and avoid public transit), so it makes sense that COVID-19 triggered this year’s bike boom.

People who hadn’t biked since childhood were getting out there and enjoying the sport. This year, the cycling community grew as experienced cyclists gave advice to friends, family members, friends of friends and new cyclists they saw struggling with a dropped chain on the side of the road.