On Feb. 27, 25-year-old Guelph, On. cyclist Heather Petrick rode 400km with 10,050m of elevation on Zwift as part of the Hells500 Roam rides. The ride was a gruelling 14 and a half hours long, the longest she had done in her two and a half years as a cyclist.

Finishing her exhausting ride, she had no idea that in less than two weeks she would once again clip in for another massive ride—this time riding 933km in 24 hours and breaking the 24h women’s Zwift distance record.

After her virtual 10K, Petrick had immediately begun to plan for a virtual Everesting, in which she would attempt a faster time climbing 8,849m. She’d spent the summer doing 200 and 300km rides, but made the decision to really step up her training this winter.

Two days after the roam ride as she was scrolling through Instagram, she saw a post about Toronto Hustle’s Crush COVID: Ride for the Mind event. “I thought: ‘well, I could do that—I could add that to the list of the crazy rides I’m doing,’” she said. The Everesting attempt was shoved aside (for now) and, with a week and a half until the event, she started preparing.

A former elite level runner, Petrick, like many other runners-turned-cyclists, came to the sport after repeated running-related stress fractures. As a PhD candidate at the University of Guelph she started riding casually two and a half years ago. After a few seasons she got more serious about her rides and joined RealDeal Racing.

Petrick had some serious training and long rides under her belt, so when a few people mentioned that the Zwift women’s 24h distance record was 680km she saw a realistic opportunity to do something that had never been done before.

She took a week to recover from the Roam ride, and spent the rest of the days leading up to Crush COVID doing some low key riding in preparation for the event.

Lucy Hempstead, who rides for Toronto Hustle, announced her plans to go for the women’s 24h indoor cycling record a few days before Crush COVID. The Ottawa cyclist had quietly been planning her attempt for months.

In the days leading up to the event Petrick read an article about Hempstead’s plan—which noted that she had registered her Guinness world record attempt the required 12 weeks in advance.

“I didn’t know you have to register for it,” says Petrick. Despite finishing with 121km more than Hempstead’s impressive 812km, Petrick doesn’t have the official Guinness world record, as she didn’t register her attempt beforehand.

She doesn’t harbour any bad feeling about it though, and respects Hempstead, her fellow runner-turned-cyclist. “It’s pretty awesome to see some other runners doing this kind of thing,” says Petrick.

The ride itself was a challenging but steady 24 hours. “Doing the other [Hells500 Roam ride] really helped me know what to expect,” says Petrick. “I have done quite a few 12 hour rides, but that one was almost 15 hours.” Despite her experience with long rides, “there were still points in the 24 hours that I was like ‘wow, this is something completely different.’”

Petrick says she didn’t go into the ride with a specific power target in mind, but knowing her body and her limits she was able to pace herself well. “I was planning to go with the flow,” she says. “I knew what I could sustain for something that long, I was aiming to ride with a group that could go around 40km/h—but nothing more than 3w/kg.” 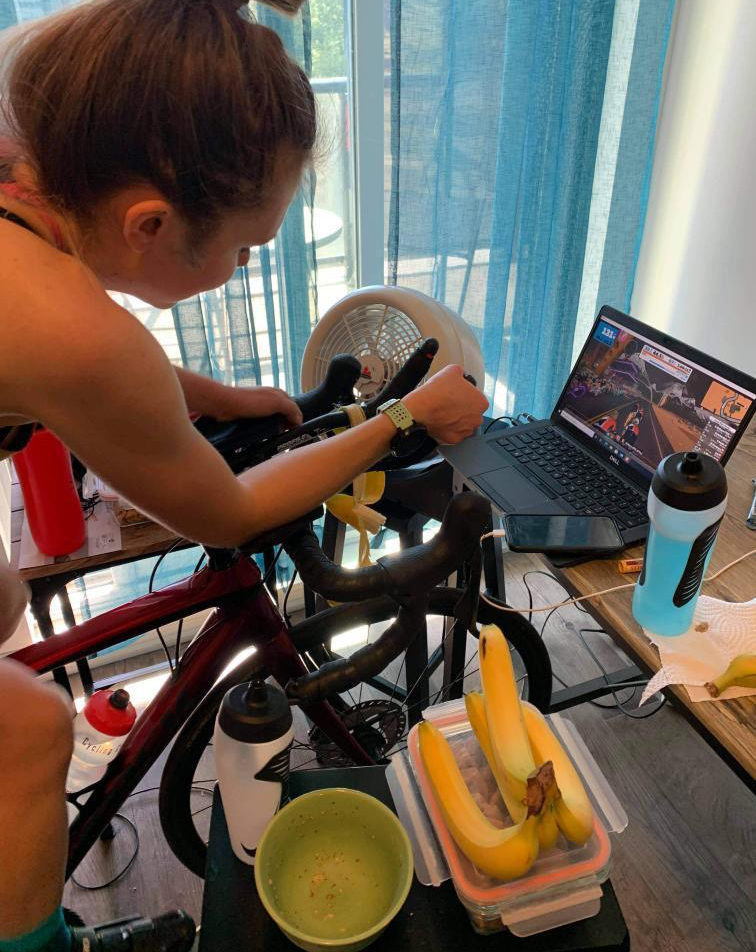 Food-wise Petrick says she was doing well until around 5:00 a.m. “I was so nauseous thinking about everything I usually eat on a ride,” she says.

“I spent 2-3 hours drinking gatorade and testing food to see if I wanted to eat it. I would take a bite and immediately know if I wanted to eat it or not—it was pretty much whatever I could get into me. Weirdly, towards the last eight hours, when you wouldn’t normally want to eat real food, I ate oatmeal and peanut butter.”

Petrick, a self-described morning person, was worried about starting a ride at 6:00 p.m.. She says she was surprised at how awake she felt throughout the ride. She only had six double espresso shots in the 24 hours, and was actually grateful that it ended at 6:00 p.m. the next day— “a ‘semi-normal’ time to sleep.”

Grateful for the tri bars a friend had lent her to diversify her hand positions, Petrick says the most painful part of her body was her feet. Otherwise, she felt pretty ok as she finished her record breaking 933km ride. “It was not as terrible as I thought it would be,” she says. “I hopped off the bike, ate an entire pizza and went to bed.”

While the Guinness record will go to Hempstead, Petrick still has the certified official Zwift world record.

There was no 2020 race season, so the powerful Canadian cyclist still hasn’t had the chance to test her legs IRL. She is looking forward to this year’s race season, but Ontario cyclists won’t have a chance to compete against the record holder. “I’m doing a joint degree between Guelph and a university in the Netherlands,” says Petrick. “I’m heading over there in two months for a couple years, so I won’t be racing in Canada.”