I recently went for a solo ride around a popular cycling location. The experience was generally pleasant enough—I was a little over dressed and the unexpectedly strong headwind was a bit of a downer but, otherwise, the sun was shining and it felt like a productive use of my ample pandemic-provided free time. As I rode on the popular cycling routes, it was nice to see so many cyclists out, most of them giving the standard flyby wave, nod or even just a little smile.

When passing or being passed by another rider I like to smile and say “hi” or “good morning!” if we make eye contact. I try to make a conscious effort to extend that warmth to all people on bikes, not just the ones on fancy road bikes in full kit. It’s really nice to be able to feel like you’re a part of a community, even when most cyclists are currently riding solo or in very small groups—it’s an aspect of cycling I hold very close to my heart.

The community element of the sport is something many people have been working on these days, especially with so many new cyclists joining in on the fun. We encourage each other to open our spaces to new riders, help them out when needed and generally make the roads more welcoming. It’s therefore understandable to me how the message can get a bit mixed up at times, but there is a point when “being helpful” turns into “giving unsolicited advice to people you don’t know.”

On my ride, within the span of a few hours, I was told by a total stranger that my gearing was wrong (as I dropped him on a climb) then, after saying I was fine and didn’t need help, I had to listen to a man I had never met telling me how I should be fixing a flat. Annoyed, I casually noted the interactions in my Strava post. Within an hour I received a dozen messages from others (all women), who told me about their comparable experiences. I also got a message from a male POC cyclist talking about similar interactions.

When is advice needed?

The men on my ride thought they were being helpful, and, in some contexts they might have been. If I was someone they were bringing out for a first ride, and they were explaining gearing to me, I would’ve really appreciated the advice. If I was stranded alone on the side of the road with no idea how to change a tube, someone stopping to assist me would have been incredibly useful. The issue is not with helping someone—the issue is giving advice with the assumption that this person doesn’t know what they’re doing or that they want your advice in the first place.

Women are overwhelmingly on the receiving end of these unwarranted cycling tips. Whether it’s from a stranger on the road or someone you kind of know on a group ride, almost all female cyclists have had an experience where someone has treated her like she just picked up a bike five minutes ago. It feels incredibly frustrating to have a person assume that you don’t know what you’re doing.

It’s important to keep making spaces for new cyclists, to take your friend who just got a bike on a ride and show them the ropes. Tell a cyclist riding erratically that they’re behaving in an unsafe way—that’s ok. Share tips between friends, you’ll know when you’re close enough with someone to do so. But, if you don’t know someone or you’re not sure if you should give them some advice, follow this flowchart. 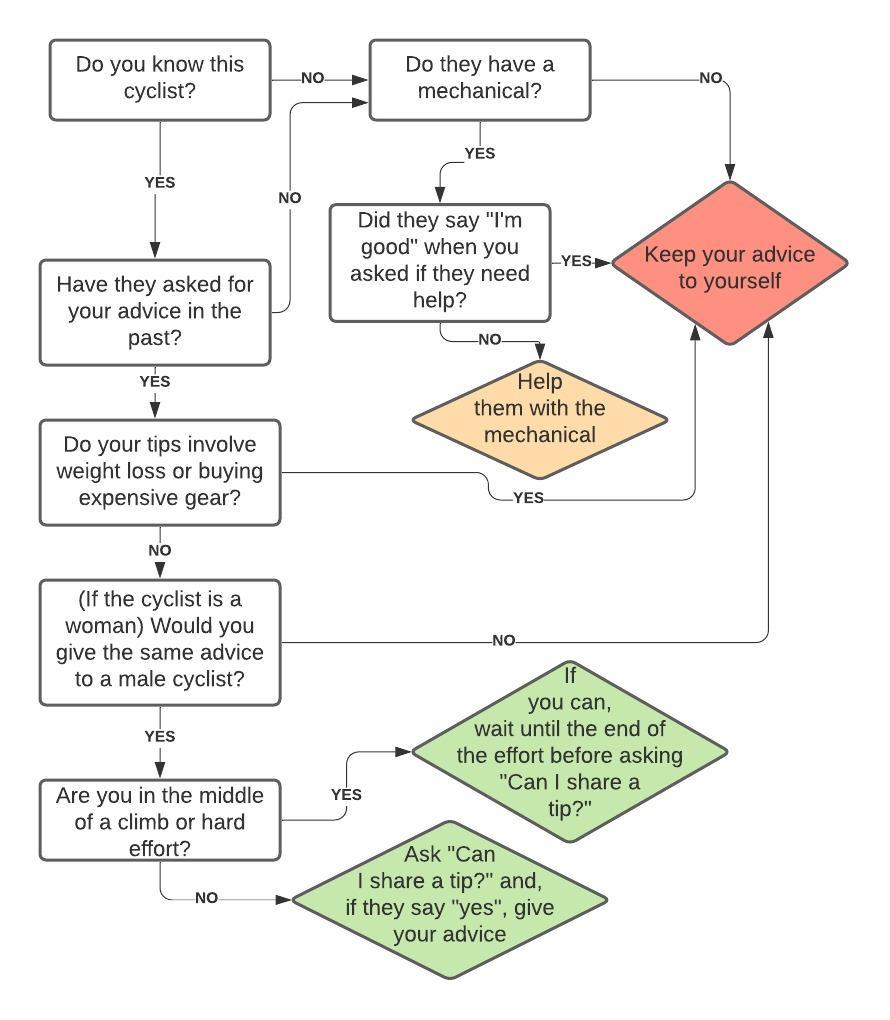