There are times when coastal British Columbia is highly deserving of the nickname “the Wet Coast” – rainfalls of 100 mm or more in 24 hours aren’t uncommon in winter months. Cyclists can either hang up the bike and wait for the sun to come out again or break out the appropriate riding attire, starting with a good waterproof jacket. I choose the latter.

Unfortunately, the jacket I’d been using for the past three years could barely be called water resistant. After one too many cold and soggy rides, I got in touch with 7Mesh, a Squamish, B.C.-based cycling gear manufacturer with a reputation for making top-notch riding gear.

7Mesh (a nod to the First Nations word for Squamish – Sḵwx̱wú7mesh) was founded in 2013 by a group of friends with extensive experience in the outdoor gear industry. Since then, the company has partnered with exercise wear giant Lululemon and grown its line of offerings. It now offers a full range of high-performance cycling wear for road and mountain biking, including an array of jackets for all conditions.

After some discussions with 7Mesh, I decided to test the top-of-the-line Revelation waterproof shell jacket. Heading into a wet West Coast winter, it best suited my needs as a four-season mountain biker and outdoor recreation enthusiast. My hope was that the Revelation would be the quiver killer of jackets.

The Revelations design is deceptively simple, with no extra features beyond what necessary for mountain biking. A closer look reveals a jacket that is highly functional and exceptionally well thought-out. It’s made of a fabric outer layer and Gore-Tex Pro inner layer, which 7Mesh says “has the widest functioning range of use of any Gore-Tex material.” Bring on the disgusting riding conditions! 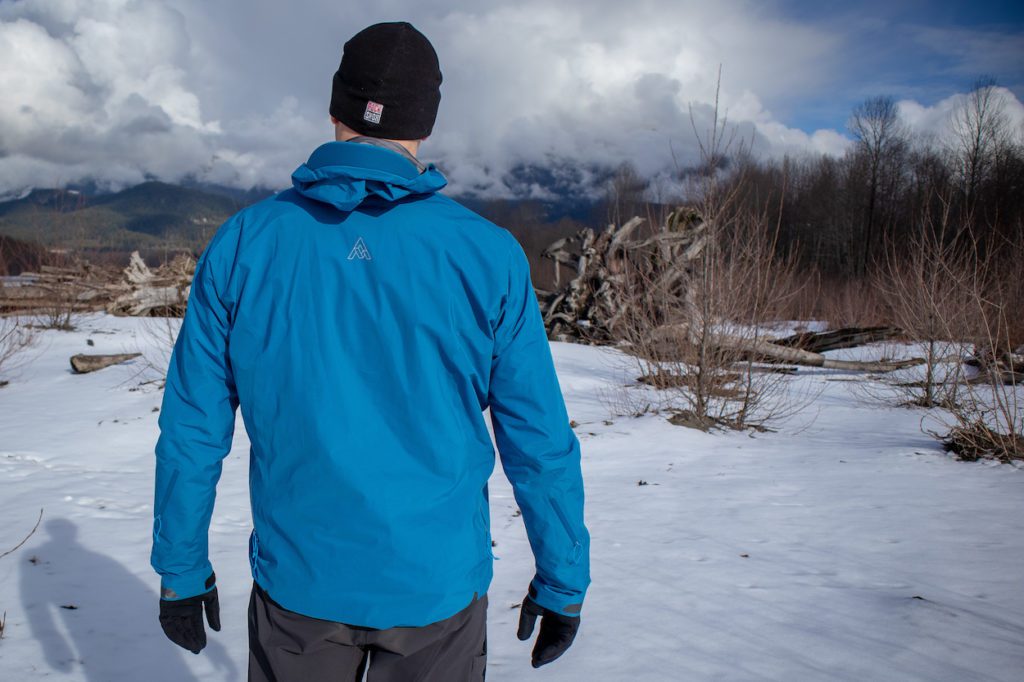 7Mesh Revelation jacket is long enough in the sleeves and back to provide protection on the bike. Image: Rhonda Brett 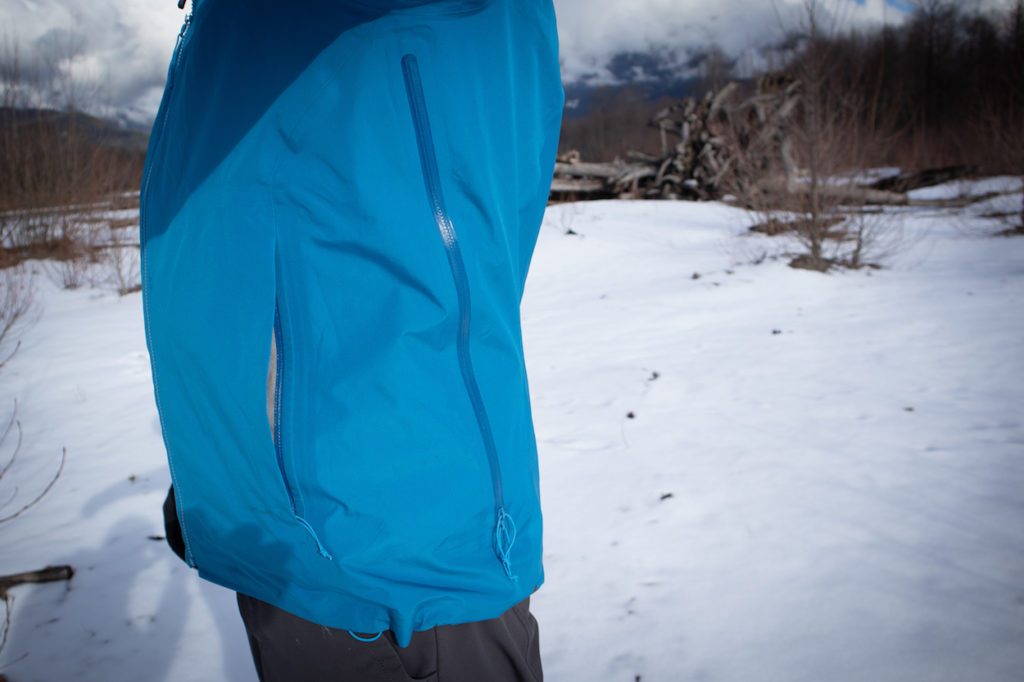 Side zips don't go all the way up into the armit of the jacket, but still provide good ventilation. The minimalist hand pockets are well positioned.Image: Rhonda Brett 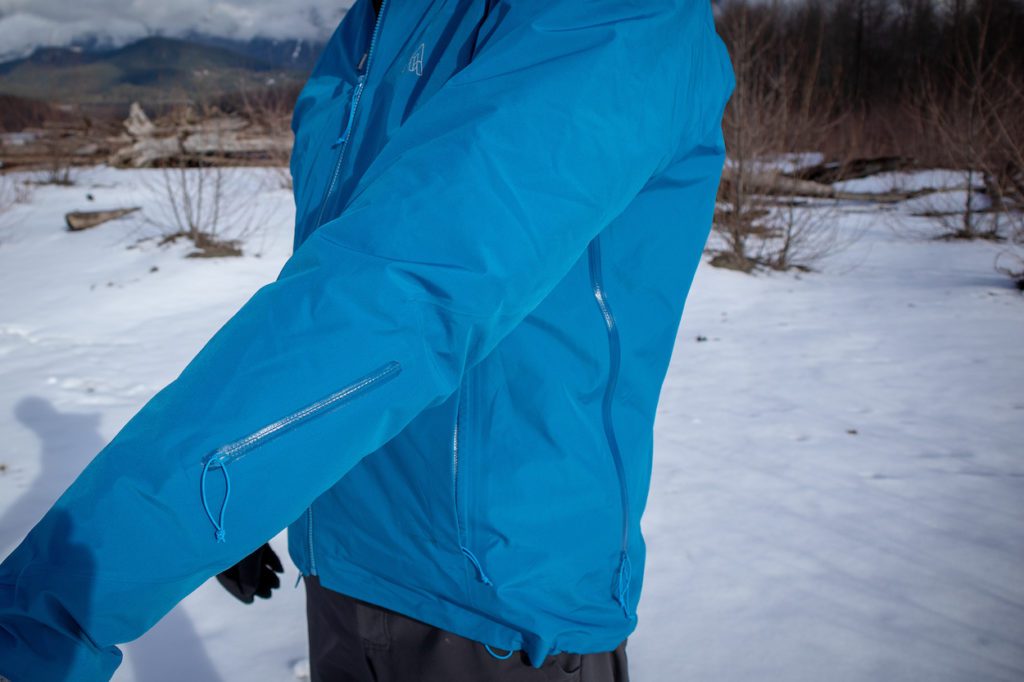 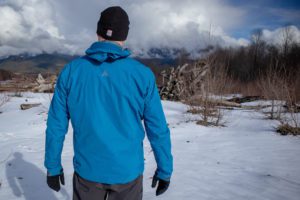 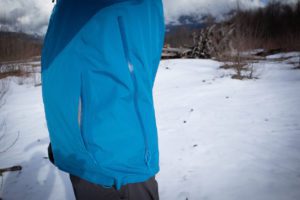 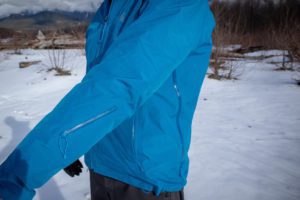 Features include a removable under-helmet hood with built-in brim, watertight hand pockets. Zippered forearm vents, zippered side vents, waist and hood drawstrings, and adjustable hook-and-loop fastener cuffs allow you to adapt the Revelation for different riding conditions. A brushed fleece collar and chin protection, and smartly placed reflective patches on the wrists and tail of the jacket add comfort and protection. Claimed weight for the Revelation is 299 g, so there are no excuses for leaving it at home when the weather is looking sketchy – whatever the season.

I’m 6’ 4” / 215 lb. with long arms and a relatively athletic upper body, and the size XXL Revelation fits me very well. The arms are plenty long to provide coverage in the riding position and the body is cut in such a way that it doesn’t let in excessive airflow. There’s room underneath for a base layer and thermal jersey on single-digit temperature days, or a thin puffy jacket on colder excursions.

I’ve been wearing the Revelation a few times a week since it arrived in December, and it has become my go-to jacket for mountain biking, snowshoeing and fat biking. With its clean style, it often pulls double duty as a daily-wear raincoat.

First and foremost, this is a waterproof jacket and it has performed admirably in that respect through the wettest, coldest winter months. Water beaded off the exterior fabric from the outset, and continued to do so for several weeks. As soon as beading became less noticeable, I washed the jacket per the care instructions and that basically took it back to out-of-the-box condition.

Judging the breathability of outerwear is a bit of a challenge for me, as I tend to run hot and throw off a lot of sweat. That said, there was consistently less condensation on the inside of the Revelation than I’ve found with other wet-weather jackets. The vents also do a very good job at scooping air in and letting out steam. The arm vents are surprisingly effective on both climbs and descents, and are well positioned to ensure rain doesn’t get into the jacket.

Construction quality is readily apparent with the Revelation. All the taped seams are straight, there are no stitching issues, and nothing is fraying or showing any noticeable wear. Unfortunately, a golf-ball sized section of the fabric outer layer did delaminate from the Gore-Tex inner layer during the test.

According to 7Mesh spokesperson Brian Goldstone, the issue isn’t unheard of but has only happened on a minute fraction of all jackets sold. He classified this particular problem as a raw materials defect rather than a manufacturing issue, and said that this would be handled as a straightforward warranty claim.

It’s hard to find fault with the Revelation. It does lack a chest pocket, which would be handy at times. The zipper pulls are made of thin-gauge cord that stay out of the way when not in use, but which can be a little tricky to grasp when wearing gloves.

Lastly, there’s price. At $600, this is not a cheap jacket. Is it worth that much? Well, even riding in the harshest conditions I never think about the Revelation, allowing me to focus on the trail. I think that’s one of the best compliments that I can pay a jacket. So yes, it is worth it if you’re serious about getting out there in the slop.

Apart from the delamination issue, I’ve been very happy with the Revelation. It’s performed admirably in harsh conditions, in a number of different applications, has a solid range of features, fits well, and keeps me dryer than any other waterproof jacket I’ve used in the past. Quiver-killer status achieved.