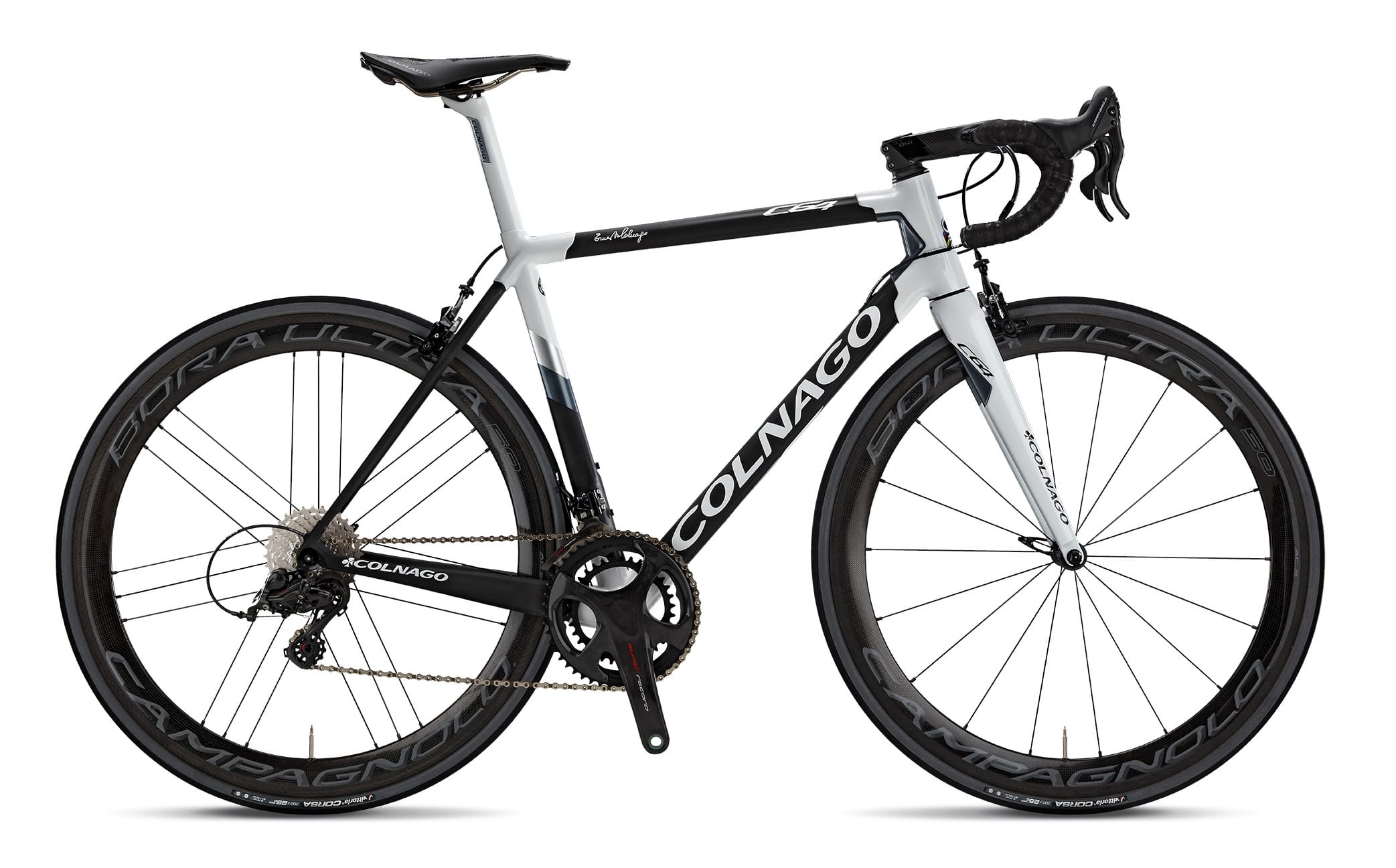 I first rode the Colnago C64 for a hot minute in January. The bike had its North American launch in Tucson, Ariz., so by noon that day, it was nicely warm. By late afternoon, the test ride was over, which was technically longer than a minute, yes, but a short ride nonetheless. Months later, the C64 arrived at my office for some more extensive testing.

Colnago’s C series started in the early ’90s with the C40. It wasn’t the first bike made from carbon-fibre tubes, but it featured a frame material that was still novel for the pro peloton. Giorgio Squinzi, the head of Mapei, worried that the bike wasn’t strong enough to handle the cobbles of Paris-Roubaix. Franco Ballerini won in Roubaix in 1995 on the C40. Three more ParisRoubaix wins came on the bike in 1996, 1998 and 1999.

Like the C40, the C64 is made in Italy with carbon-fibre tubes fit into carbon-fibre lugs. It’s a process with more similarities to the way Ernesto Colnago fashioned steel frames than with the contemporary carbon-fibre production process that uses moulds. The tubes of the C64 – as with the previous C model, the C60 – have a fluted, star-shape. On the new frame, the head-tube lug and fork blades have indents, which are new weight-saving design elements. In the seat-tube lug, there’s an alloy seat clamp. You adjust your seatpost by loosening or tightening a bolt tucked under the seat-tube lug. This system saves about 15 g. The D shape seatpost comes from Colnago’s V2-R, while the upper cups at the headset come from the Concept aero bike. These cups are made with carbon fibre, nylon and elastomers, and help to dampen road vibrations. My test bike was a rim-brake model, however, there’s also a disc-brake version available.

While the C series bikes used to be built with Colnago’s traditional geometry – featuring a horizontal top tube – and sloping geometry, the C64 frame comes in nine sizes of sloping. Also, there are four high-geometry options that have head tubes that are 15 mm taller (20 mm in the case of the 56h) than their sloping siblings. For traditional geometry, you’ll have to took to Colnago’s steel frames. While I usually ride a Size 54 frame, the 50s C64 fit me perfectly.

I’ve ridden a number of Italian super frames, all of which were, in fact, super. The C64, however, seems the most balanced. It steers beautifully into and through corners. It zips forward effortlessly when I press on the pedals. Yet, it’s perfectly content to cruise along. I had some glorious long rides on this bike. If I felt shattered at the end, it was from going too hard, not from any harshness in the frame. I didn’t find any pavé à la Roubaix, but about 5-km of gravel was my local equivalent. The bike with its 25c tires was fine on the rocky roads. The frame can accommodate 28c treads, which handle the bumps better.

As you might expect, the bike I tested came spec’d with Campagnolo components. The mechanical Super Record gruppo performed well, its chain making Campy’s telltale kerchunk when it switched to a new cog. If you’d like to spec your C series bike with Shimano, as Mapei did, you can. With the proper finishing kit, you can have your bike outfitted with Shimano, Campy or SRAM groupsets, mechanical or electrical.

After that short first ride, and the long wait for a test bike, I had the pleasure of riding the C64 for months. It’s a bike that had me neglecting my regular ride, without any feelings of guilt. After all, I knew once the C64 was gone, those few months with the bike would feel like only a hot minute.