When launching a new bike, the bike industry has a well-worn playbook. Brands will talk about how the bike was developed in response to a request from pro riders or the demands of a particular race. They will tout the pro team’s involvement in the development process, and then highlight how the new bike was tested in prototype form at the highest level to validate the design. But with Cervélo’s latest release, the Soloist, the company is upfront about the fact that it’s not for the pro riders of Jumbo Visma exactly. The pros on Cervélo’s current team have their pick of the all-out aero S5 or the lightweight R5, depending on the day’s parcours. No, the new Soloist is made more for us everyday riders, who still like to go fast even if we don’t have a pro contract.

You may remember the original Soloist, which was ridden by Team CSC in the early to mid 2000s to plenty of stage and race victories. But arguably the original Soloist’s real claim to fame is that it was the bike most responsible for introducing and popularizing the idea of the aero road bike: a pretty consequential shift in road bike development. Despite bearing an old name, this new Soloist has little in common with its progenitor. It’s a completely new bike.

The genesis of the new Soloist actually goes back as far as late 2018, before the current R5 and S5 designs were finalized, when Cervélo was looking at the road map for its lineup. Up to that time, Cervélo (like many other brands) had always started with a top-tier bike, finalized that design, and then built more value-oriented versions based on the top model by using more affordable carbon fibre material, simplifying layup, and other cost-saving measures to hit price points. However, Cervélo’s engineering manager Scott Roy, along with director of product management Maria Benson pushed for a new development path, one that gave the mid-tier models their own purpose-built design, rather than adapting from the top level. The reason? Design freedom.

As Roy puts it, adapting a design across multiple tiers places limits on what one could do, “Objectively, it’s a lot harder to do. You end up with a worse bike. If you start with an initial concept sketch, like the R5, and think there is not only going to be a 5 level product, but also worry about needing to do a lower-level product, there are things you can’t do from a very early stage in the design process.” In other words, Roy contends that trying to adopt a single design for multiple price points, means compromises have to be made. By pursuing separate development paths, it freed up the design team to pursue the best solution for each bike.

The new Soloist is expressly made to suit the everyday rider, rather than adapted from the R5 and S5 that are made for the pros. But what does that mean exactly? For Cervélo that means the bike needs to be pretty aero, pretty light, and simple to work on. Afterall, most of us are only going to have one road bike. We don’t have the luxury of choosing from a fleet to suit the day’s parcours. We definitely don’t have a team mechanic on hand to keep them running and deal with any issues. The ability to balance these sometimes conflicting goals is one of the benefits of the clean-sheet design of the Soloist, rather than a detuned version of the S5 or R5 with a cheaper layup.

With those three contradictory goals, came a lot of work. “Something like a Caledonia for example, we were able to take a lot of the stuff we had learned from the Áspero. Because this was a whole new starting point, the tube shapes we ended up with are unique to this bike.”

It started with a seatpost

According to Roy, “When we started the Soloist project in earnest, putting pen to paper, the thing we started with was the seatpost. We needed a new seatpost.” Roy and his team couldn’t just use the D-shape seatpst from the R5 because that wasn’t going to be fast enough. Nor could they adopt the S5 post, not necessarily because they couldn’t get it light enough, but the seatpost shape and its associated chord depth, determines most of the rest of the bike, and that would be heavy. “The seat tube itself has to accommodate the seatpost in that depth. So if you are using an S5 shape, automatically your seatpost and seat tube now needs to be that depth, then to balance that and transition into the downtube, now that has to match.”

“We went through 30 to 35 iterations of seatpost in chord section and shape,” Roy recounts. “Even just sharpening up the trailing edges makes a difference. We did two or three iterations where we changed that trailing edge pinch until we got to a place we were happy with. Then we did a couple of iterations of that physically, put it in the tunnel, and then we got to a shape we were comfortable with. And once we had that, then we were able to work with our design team outlining how we need about this much surface area to match the aero performance, and I need it to be about this, to hit the weight target we were expecting.”

For the Soloist’s aero and weight target, Cervélo aimed for a middle ground between the S5 and the R5. Designers tried to put as much of the aero performance of the S5 into the Soloist, while keeping as much of the light weight and ride characteristics of the R5 as possible.

The aero cues on the new Soloist are obvious: the head-tube depth, the compensation triangles at the top tube/seat tube juncture, the filled-in area at the bottom bracket, all are due to the newly relaxed UCI rules regarding frame dimensions. Even the seatstays have a subtle ovalized profile to them.

In actual numbers, Roy told me the Soloist has about 190 g more drag than the current S5, which is one of the most aerodynamically efficient designs currently.  That 190 g aero penalty at the 30 m.p.h. (48 km/h) Cervélo tested the Soloist at, translates to a difference of roughly 22 W: pretty substantial. At the more realistic speed of low to mid 30 km/h that most of us average, that gap would narrow to somewhere between 10–15 W. Compared with the R5 though, the Soloist is another 126 g of drag faster, or about 14 W less at 48 km/h.

Arguably at least as important as weight and aero is ride feel. It’s also the one area the Soloist did not forge its own path. Roy said the Soloist is “very similar to the R5; it’s what we based it on.” Cervélo modelled the geometry and stiffness of the Soloist on the Tour-winning R5. The stack and reach is identical once the headset top cap is accounted for. The bottom bracket stiffness is about the same, although the Soloist’s head tube is a little stiffer. “So if you are a Cervélo customer, you kind of already have an idea of how it’s going to ride, how it’s going to feel,” Roy says.

To make the Soloist easier to live with, cables run outside the bars and stem, and into the headset top cap. The stock stem has a little clip that keeps the cables tucked in tight, keeping everything tidy and clean visually. Even though the fork has a D-shaped steerer for internal cable routing, the Soloist can take any standard bar/stem combo you want to run. This feature is is a huge plus. Since the test bike is slightly small for me, I needed a longer stem than the stock one for my fit. I was able to grab a stem from several I keep for such occasions, and put it on the Soloist. No hunting for a specific proprietary stem, or hassles with cutting hoses and bleeding brakes. In another nod to offering choice to the rider, the new Soloist can take mechanical drivetrains. The new headset top cap is also backwards compatible with the R5 and Áspero 5, giving the owners of those bikes a potentially wider choice of bar and stem for their own setups.

Down low, the Soloist features a threaded bottom bracket, again to simplify maintenance. It’s a T47 threaded BB, but in a unique-to-Cervélo BBright flavour. Cervélo has long used the asymmetric BBright in a press-fit format on its bikes. This latest T47 version of the BBright simply means the bearings are inboard on the non-drive side, and outboard on the drive side. Otherwise it will take standard T47 threaded BB parts, and replacement BBs will be available from Cervélo and its dealers.

Tire clearance is generous. The new bike is officially rated to accept treads as wide as 34 mm: more than enough to take this bike to places it wasn’t really meant for.

I’ve had the Soloist for a little more than a week, and have put about 400 km on it in that time. My first impression of the Soloist is that it’s stiff. It’s a race bike afterall, but that stiffness is well-matched between the front and rear.  When going into a corner, the bike feels cohesive, of one piece, no surprises. More important, it’s not so stiff that the Soloist is unsettled or can’t hold its lines through bumpy, chattery corners. Paired with that solid feeling is a well-honed race geometry, with handling that is responsive and direct; it goes exactly where you point it, when you point it. If you’ve ridden an R5, this will feel familiar.

The Soloist is not uncomfortabe on longer rides. I took it on a 140-km ride with some light gravel dirt roads thrown in. The Soloist was a lot of fun, fast on pavement, while very capable on dirt roads—surprisingly so. A lot of the credit goes to the Reserve wheels with their progressive 25-mm  internal rim width, which took the stock 28-mm Vittoria Rubino Pro to a width of 31 mm. Cervélo partnered with Reserve on its road wheel line up. The wheels are stable in the wind, competitively light, spin up quickly and tubeless-compatible. Soloist owners won’t be looking for wheel upgrade any time soon.

If you are after a more upright, more comfortable all-day cruiser with more stability, the Caledonia might be a better choice. But if you are after something that has sharper handling for racing or fast group rides, the Soloist could be just the ticket. Cervelo’s Scott Roy thinks of the Soloist as “a more aggressive fitting, stiffer Caledonia 5,” and I would agree. Least you think the Soloist is only for us weekend warriors, know that it has been raced, since the beginning of the year, under the Jumbo Visma development team.

The original Soloist was very consequential in bike development, ushering in the aero road category. With the new Soloist, Cervelo has come up with a winning blend of aero, light weight and rider-friendly features. I think this new Soloist lives up to its lineage.

The Cervélo Soloist is available now at Cervélo dealers. More at cervelo.com 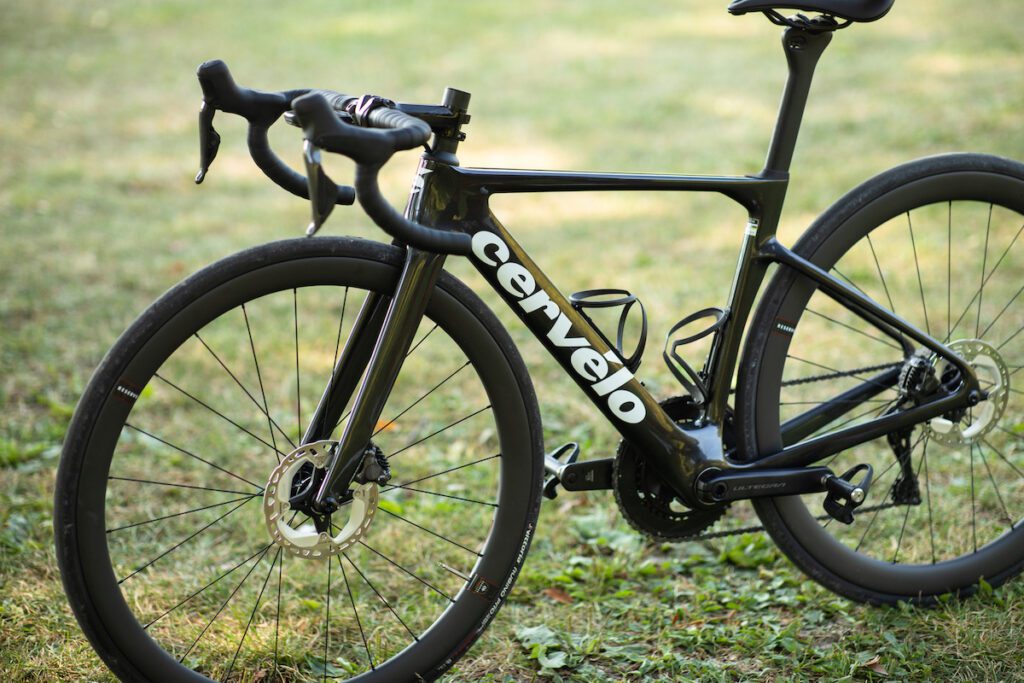 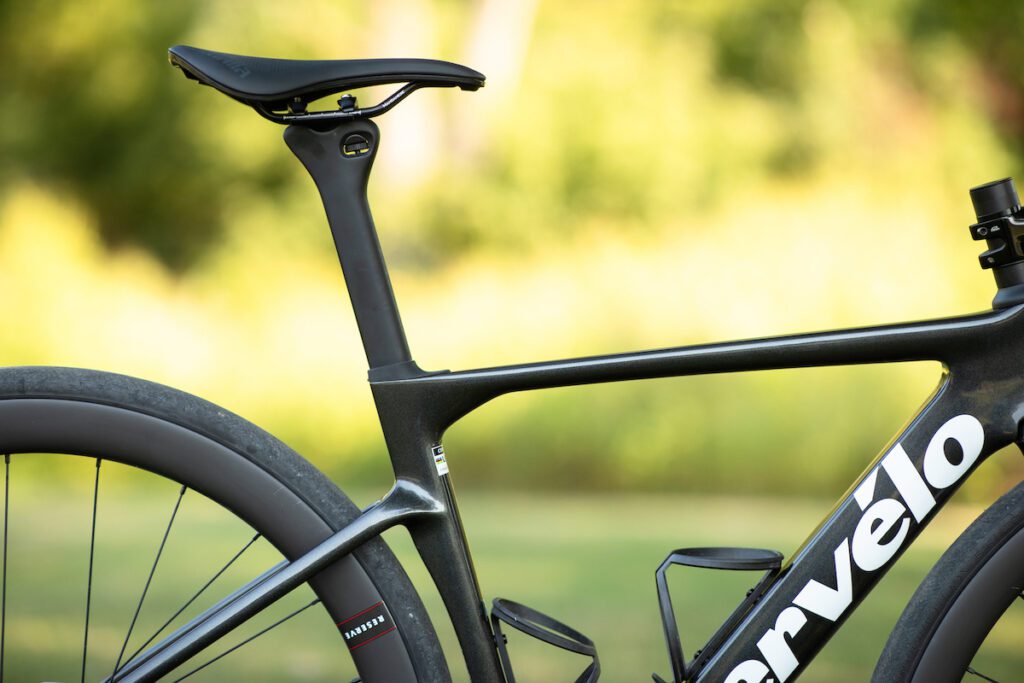 The compensation triangles on the Cervelo Soloist are the result of newly relaxed UCI rules. (Photo by Nick Iwanyshyn) 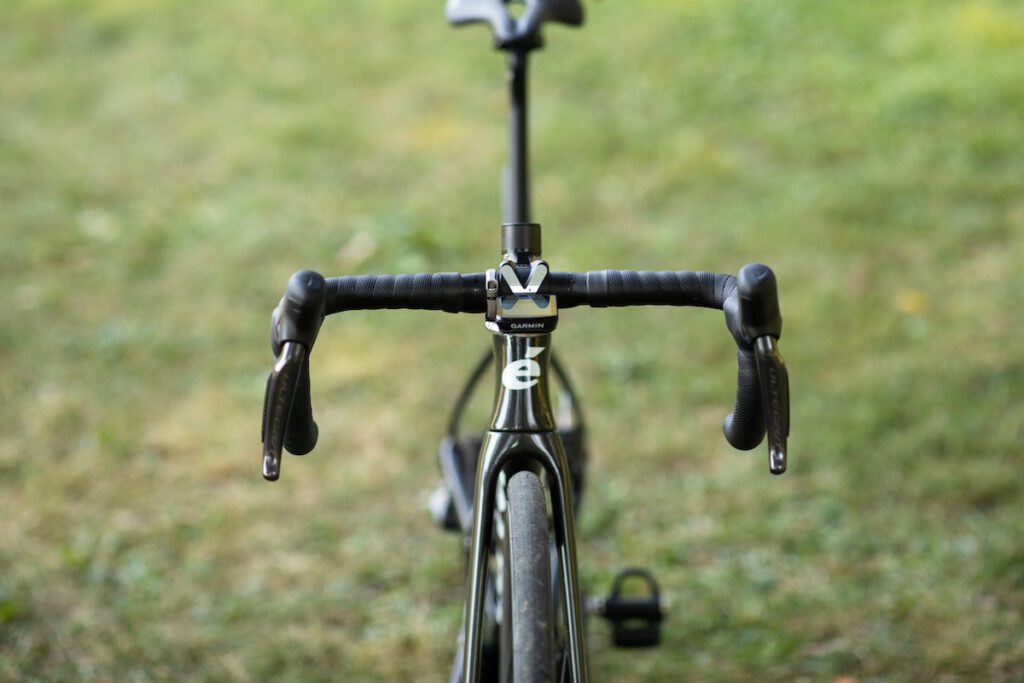 The wind won't see much cables on the Cervelo Soloist. (Photo by Nick Iwanyshyn) 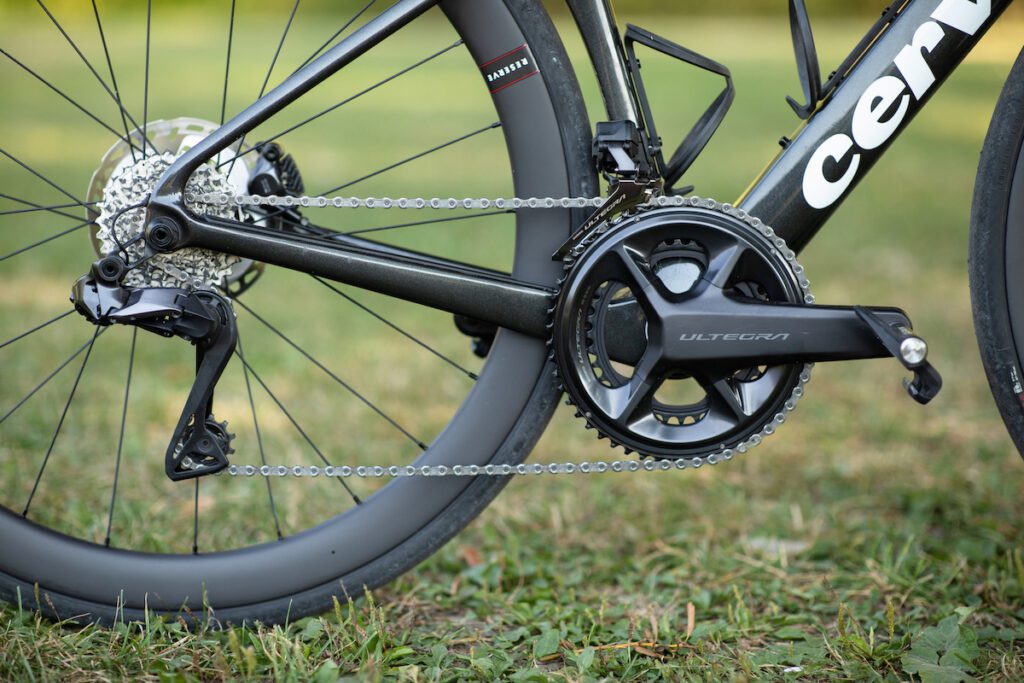 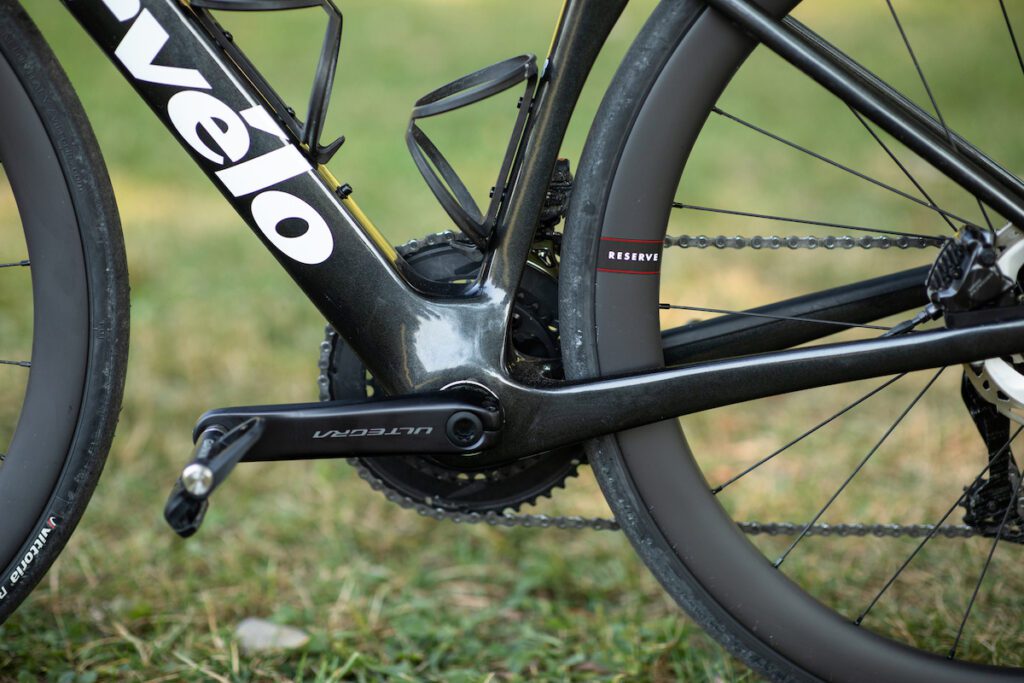 The BB on the Cervelo Soloist are also at max UCI allowable limit. (Photo by Nick Iwanyshyn) 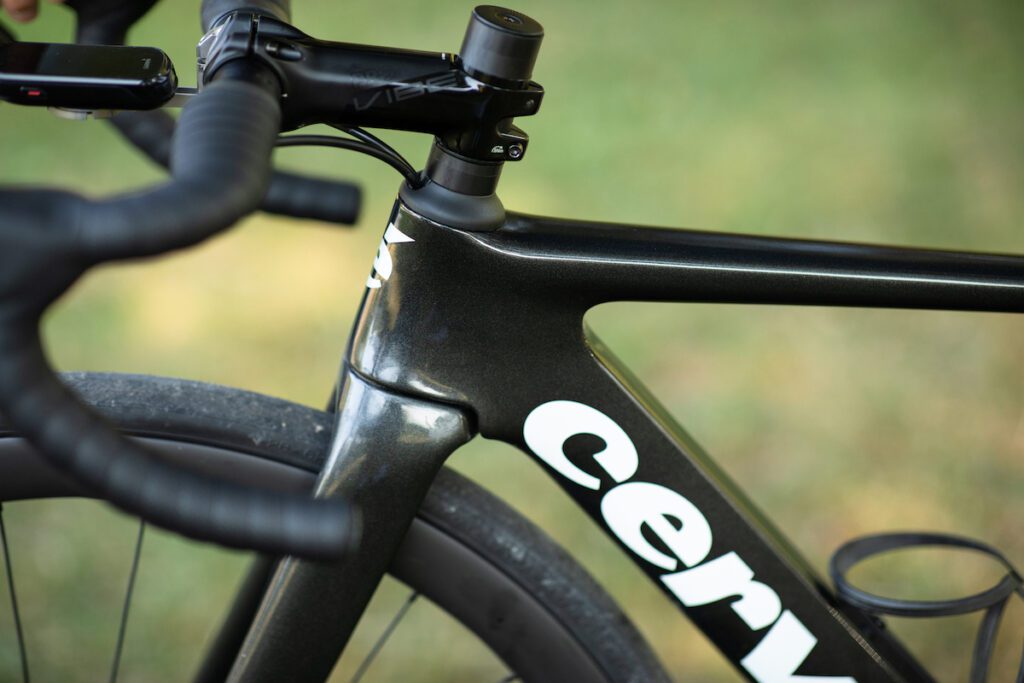 The fork and down tube juncture is a signature element of Cervelo, the Soloist is no exception. (Photo by Nick Iwanyshyn) 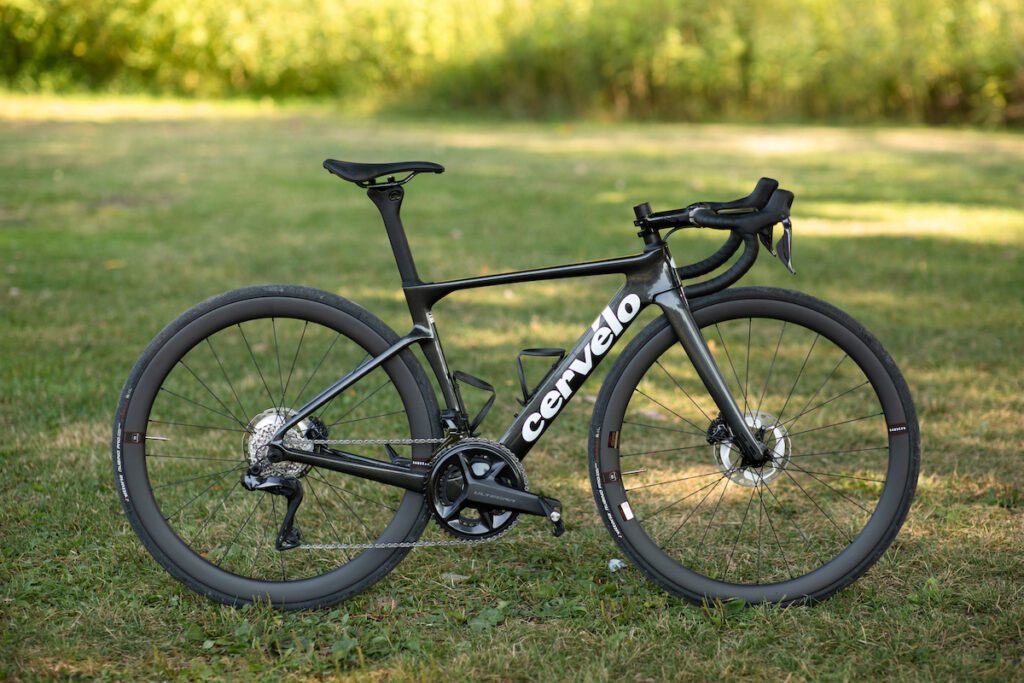 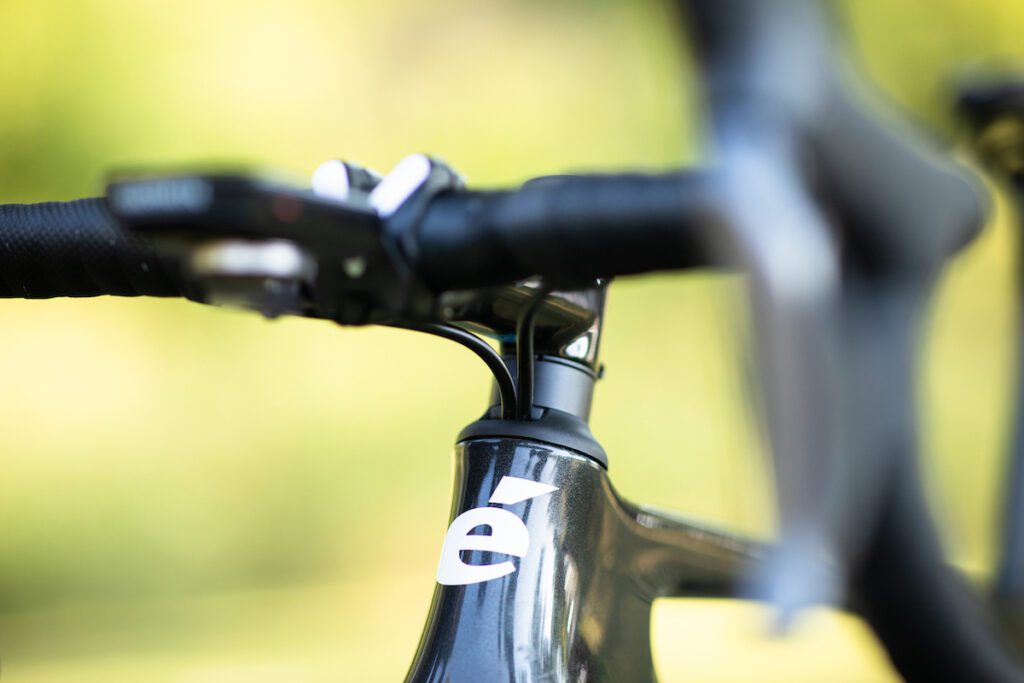 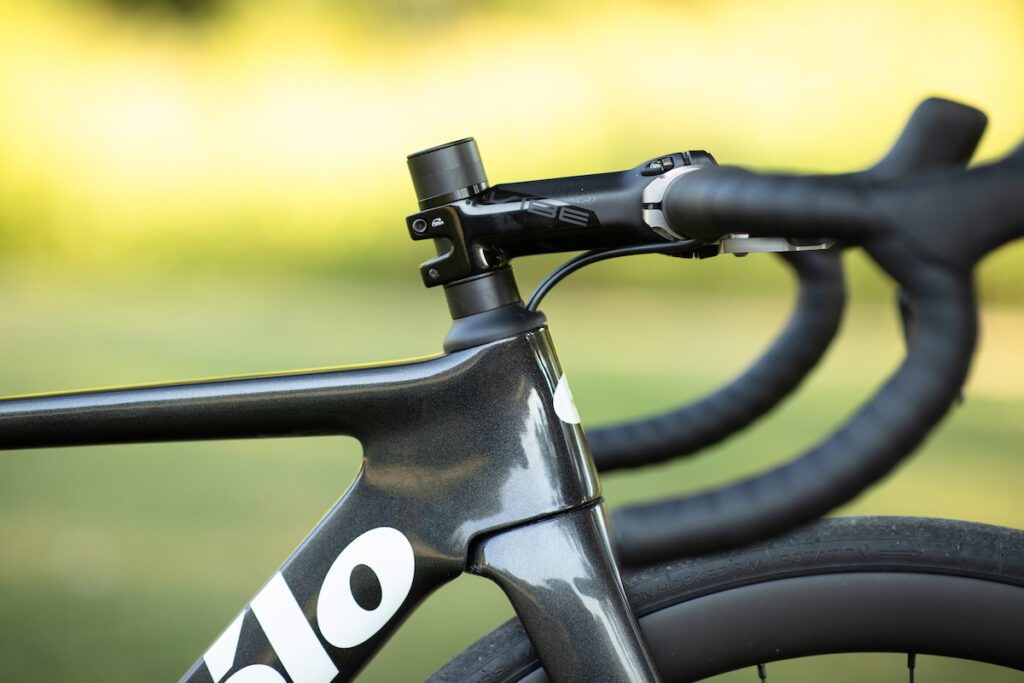 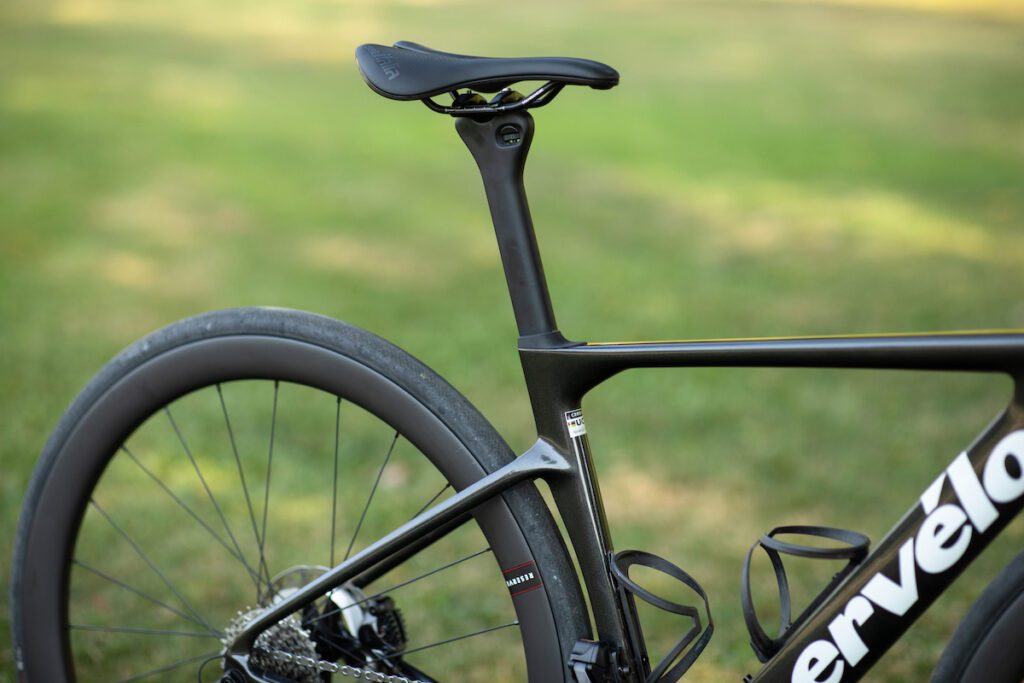 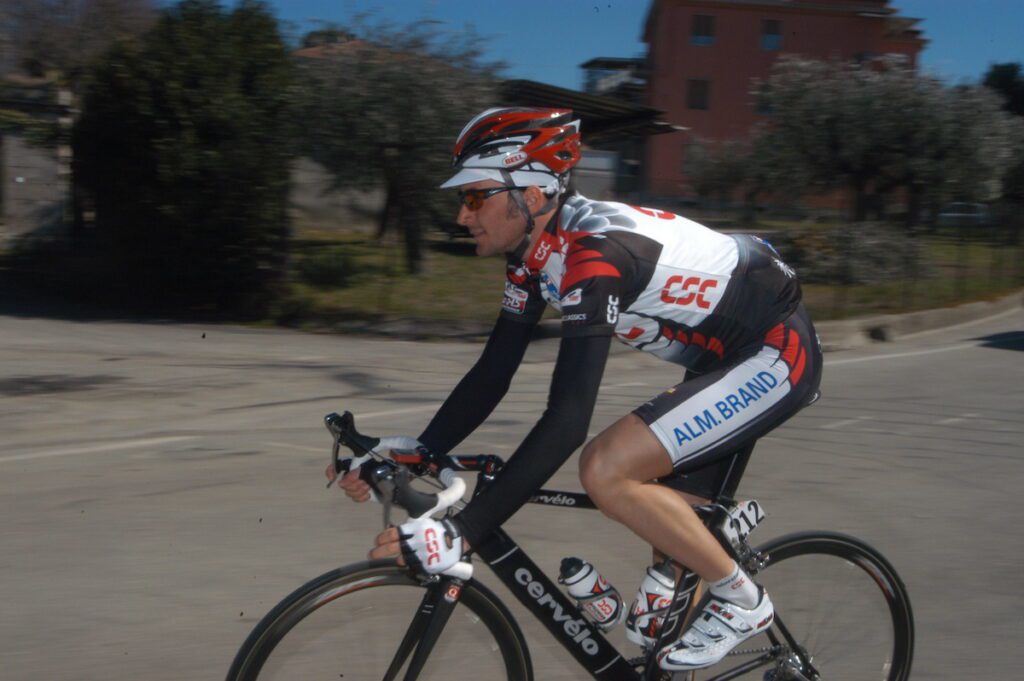 The OG Soloist, under Ivan Basso of Team CSC. (Sirotti) 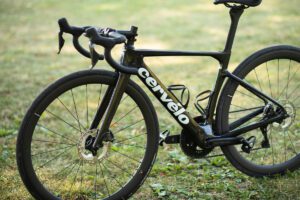 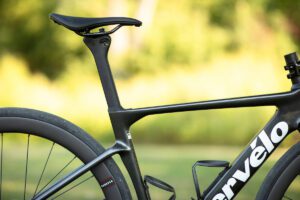 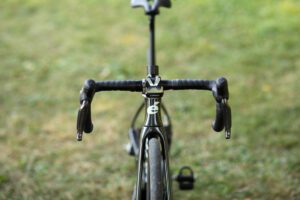 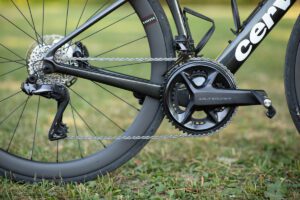 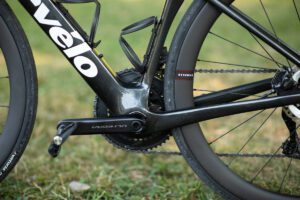 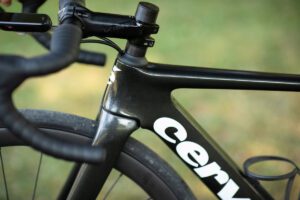 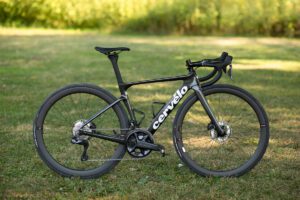 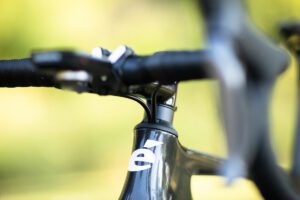 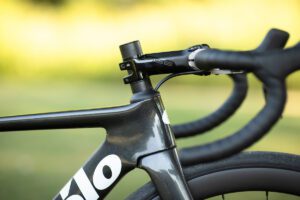 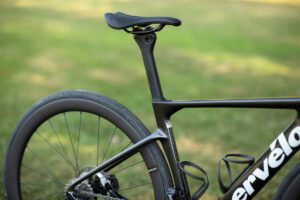 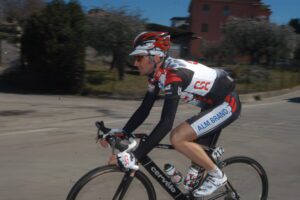