On July 6, Giant announced the latest addition to its growing collection of ebikes, the Revolt E+ Pro. The gravel bike was designed for road, gravel and multi-surface adventures and uses Giant’s SyncDrive Pro system integrated with a powerful Shimano EP8 motor typically seen only on mountain bikes.

The Revolt E+ is powered by a Shimano EP8 motor. It’s the first time Giant has gone with Shimano for an ebike motor, and, the company says it’s also the first time the EP8 motor (normally found in mountain ebikes), is being used in a gravel application.

The bike uses SyncDrive Pro, a pedal-assist system that is powered by the Shimano EP8 motor. Giant says the system was designed to produce smooth acceleration on paved roads, gravel or dirt. The customized powertrain is optimized to work with Shimano Di2 electronic shift levers, which allows for a clean cockpit setup that doesn’t require the additional handlebar-mounted display featured on many ebikes.

In contrast to the SyncDrive Pro systems used on many other Giant ebikes, the Shimano EP8 motor is tuned to respond less to torque input and more to cadence. Giant says this makes it ideal for steady pedalling output, which is a better standard of pedal assist for gravel-style riding. The motor system weighs 2.8kg and delivers 85Nm of torque. 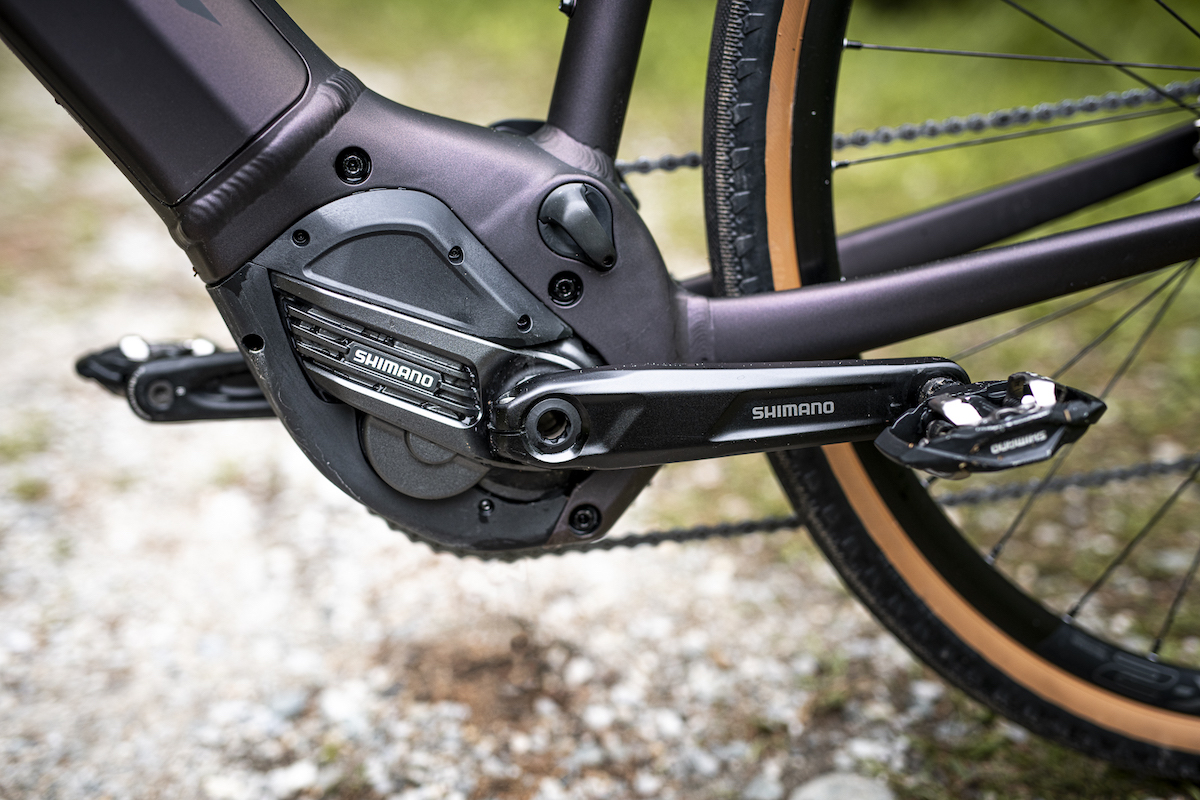 The Revolt E+ also features Giant’s SmartAssist technology. Six smart sensors measure the power being applied to the pedals, calculating the right amount of pedalling support required to create a natural riding experience. The rider can choose to have the support levels adjust automatically while riding, instead of having to increase or decrease the level of pedal assist while riding. SmartAssist also connects via ANT+ to the rider’s bike computer.

The “RideControl Go button”, located on the top tube of the ALUXX SL frameset, can also be used to change power modes. For additional controls and customizable data fields, riders have to connect their phones to Giant’s RideControl App.

Giant designed the Revolt E+ with longer rides in mind. In order to last from single-day adventures to multi-day touring, the Revolt E+ comes with the new EnergyPak Smart Compact 500 battery integrated into the downtube of the frameset. The battery offers a longer range and quicker charging capabilities (up to 80 per cent in 2.2 hours) than the company’s previous battery models. The Revolt E+ also comes with an optional EnergyPak Plus range extender, which provides an additional 250Wh of power.

The bike comes with 40mm Maxxis Receptor Skinwall tubeless tires, a composite fork and Giant’s D-Fuse seatpost to help absorb bumps and vibrations and add compliance. All models of the Revolt E+ feature integrated mounts for fenders, racks and other accessories.