I conducted some experiments with the Mec Provincial Trail. The bike came with 650b-diameter Alex Boondocks 3 wheels with Donnelly X-Plor MSO tires at 42c. Mec also set me up with a pair of 700c Boondocks 3 rims with X’Plor cDG treads at 30c. Before I ran my tests, I took measurements. I grabbed a spirit level so I could hold wheels parallel to the wall as my wife marked their actual diameters on a piece of tape I’d put up. The 650b with tire has a diameter of 679 mm, while the 700c with tire was 690 mm, a difference of 11 mm. The 650b pair weighed in at 3.63 kg, the 700c at 3.26 kg. Then with the 650b wheels back on the 7005 aluminum frame, I went for a ride. 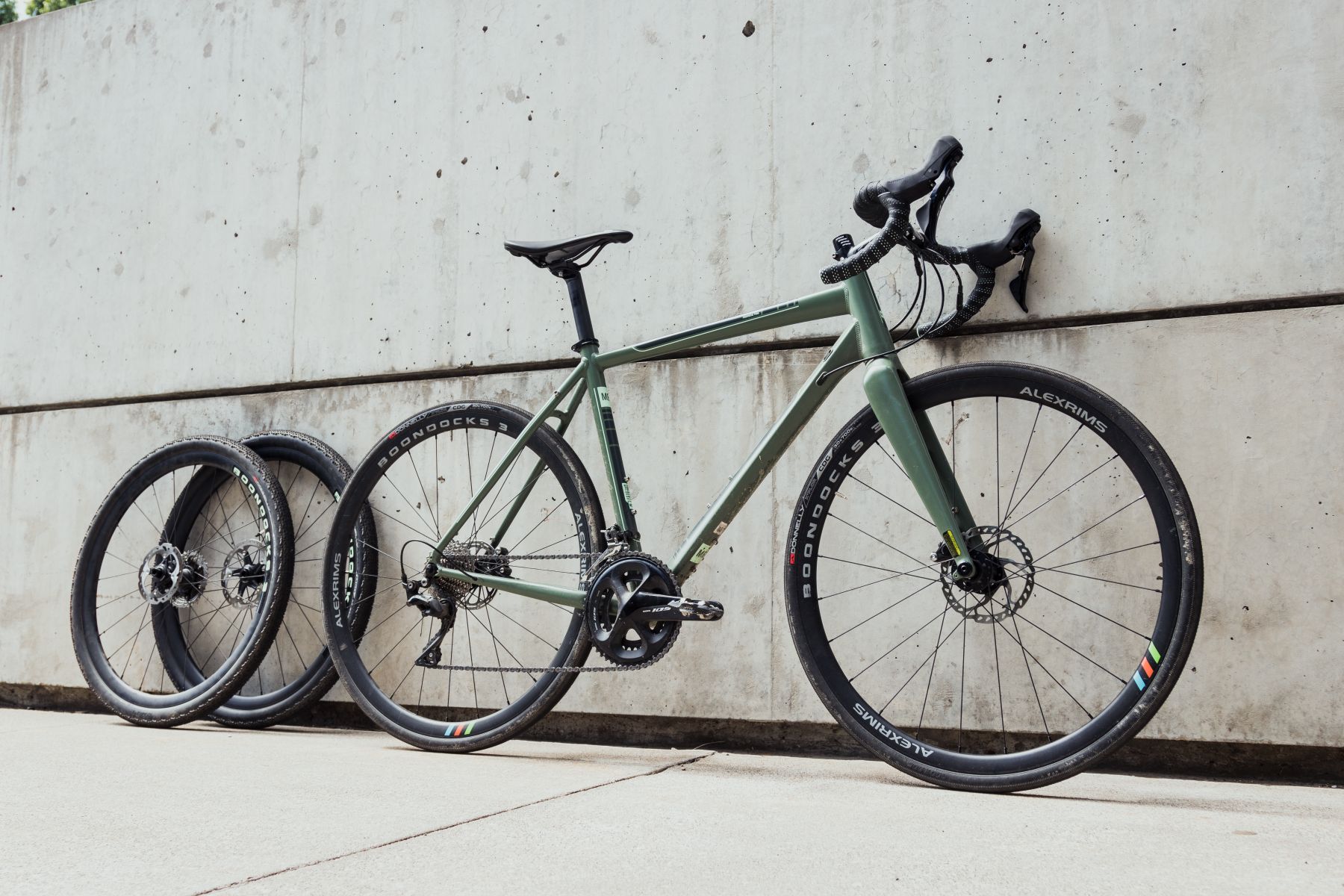 The Provincial Trail started appearing in stores this past fall. It replaces the Provincial Road 233. The latter had a versatile steel frame, but its 1 1/8″-diameter steering tube kept fronttire clearance at about 45 mm. Mec bike product manager Tim McDermott wanted a bike that had even more space. The tapered 1 1/8″-to-1 1/2″ steering tube on the Provincial Trail facilitates 60 mm of clearance in the fork, which allows you to run some pretty wide rubber. The chainstays are also about 10 mm longer to accommodate wider and taller treads.

The bike comes equipped with a Shimano 105 drivetrain and hydraulic disc brakes. Other features include braze-ons for racks, fenders and a third water-bottle cage. There’s even cable routing for a dropper post. McDermott has designed this bike so that you can ride it in a gran fondo, a cyclocross race, a commute or even a weekend wine tour. “You can literally do all of those things on this bike, especially with two sets of wheels,” he says.

For the first part of my experiment, I took the Provincial Trail out on an hour-long loop that had paved roads, recreational paths than ranged from smooth to chopped up and rutted, some gravel and some light, but often steep, singletrack. Of course, the 650b wheels bossed every surface. The traction was great. On the longer paved stretches, things did seem slower. The weight of the wheels and tires gave the bike a slightly sluggish feel. Still, I don’t think the setup is that much slower. On another test ride, I came close to matching my best time on a paved climb.

After a quick wheel swap, I was back on my loop. The 700c setup definitely had less grip. I got a bit slippy on a sand patch in the middle of slight descent. Later, I started going sideways on some gravel. I pulled out of the slide, so it was more rad than bad. The paved parts felt faster on the 700c wheels. What surprised me was that the steep climbs were just as easy to clear on the big hoops as the small ones. Everything was dry, so making it up a dirt climb was more about gearing and gams. The drivetrain is road-oriented, 50/34 tooth rings and 11–34 tooth cassette, which is fine for my route, but easier gears would be better for tougher trails.

My conclusion? The 650b with the wider tires are confidence inspiring with their grip. Would I need them for the various surfaces I have nearby? No. But I wouldn’t hesitate to recommend them to someone not used to the loose stuff. I also would grab them if I faced more challenging gravel or trails.

Like any good scientist, I’m going to run some more tests. I’m glad my lab is outside and is a nice place for ripping on a Provincial Trail.