The new Cervélo Caledonia takes its name from a road in Toronto. Caledonia is a north/south street that starts at western edge of Little Italy. As you head north, past the nice residential strip, the road gets worse and worse, both in its quality and with its scenery—big-box hardware stores, warehouses and outlets. There are lots of cracks and potholes on the street’s surface. A lot of them.

Cervélo’s Toronto headquarters are right off of Caledonia. Scott Roy, Cervélo’s engineering manager who’s from Sydney, Australia, was shocked by the road when he first encountered it. “I was like, ‘This is where you guys are? How are you—? Why don’t we make fat bikes? Those are more appropriate for this road,'” he says. The road is also the final stretch on the staff’s Thursday-night group ride. There’s a hotly contested segment on Caledonia.

Influences on the new Cervélo Caledonia

The company looked back to 2011 for some ideas about how to make a road bike suited for rough surfaces, gravel and some light bikepacking. That year, Johan Vansummeren won Paris-Roubaix on a Cervélo R3 Mud, a model that was hard to come by outside the pro peloton. In 2015, Cervélo debuted its endurance-focused C Series of bikes, which prioritized compliance and comfort. (The C Series will be discontinued after model year 2020.) “The things we learned in carbon layup development and compliance in the C Series are applied to this bike,” Roy says. “But if you look at the geometry chart, they are not similar.”

In 2019, Team Sunweb raced the most recent R3 at Paris-Roubaix. “They didn’t run the R5 because it’s too stiff,” Roy says. “The initial feedback I received on the R3 was that it was still too skittish.” To address that behaviour, Cervélo slowed down the handling a touch. The trail on the Caledonia is 58.5 mm, about a 0.3 mm difference compared with the R3. The Caledonia also has a longer wheelbase for added stability. The stiffness of the Caledonia, Roy says, is similar to the Áspero, the company’s pure gravel-racing bike that debuted in 2019, and the old R3 Mud.

The tube shapes are very similar to the R Series pipes. The dropped seatstays allow for a good portion of the seatpost to be exposed, which allows for more compliance. The seatpost has a D-shape that facilitates fore-and-aft movement. 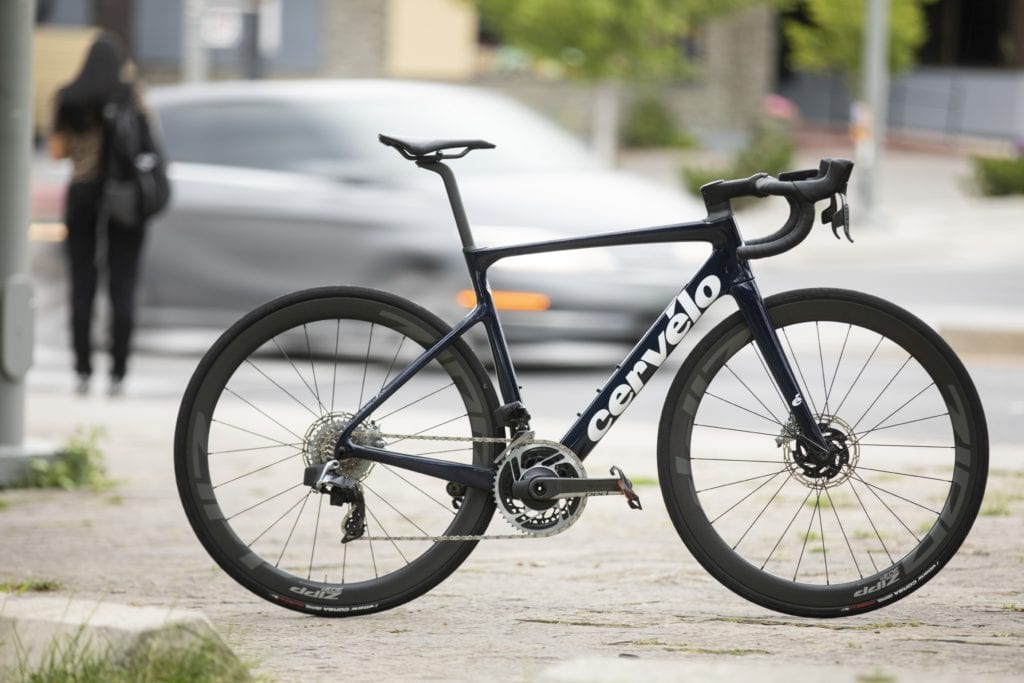 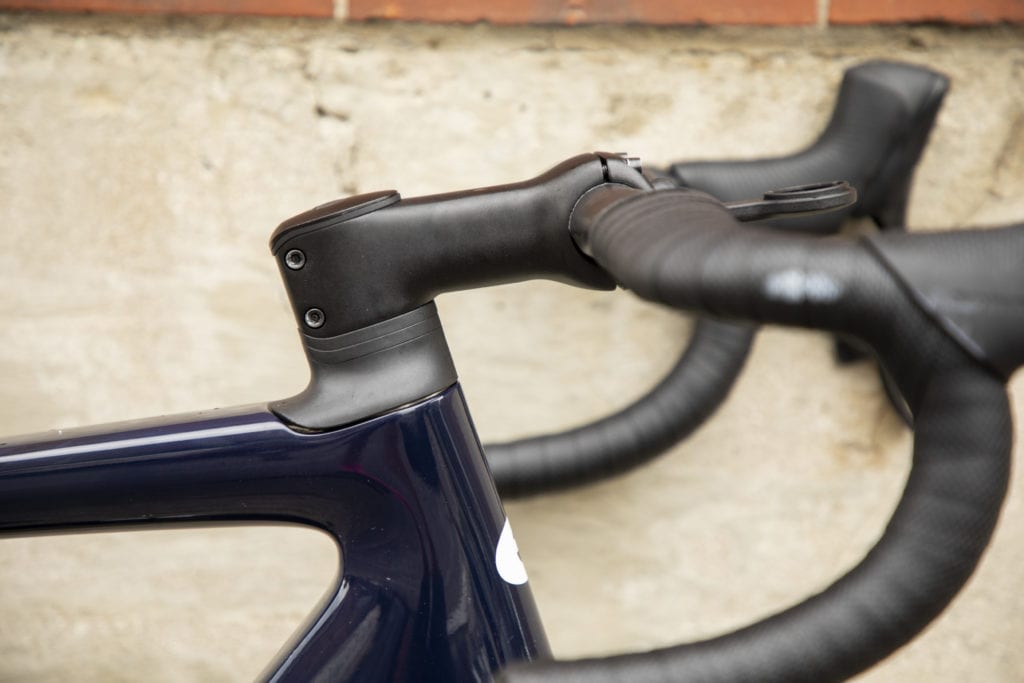 The bearing top cap offers a smooth transition between the frame and the spacers beneath the stem. Photo: Nick Iwanyshyn 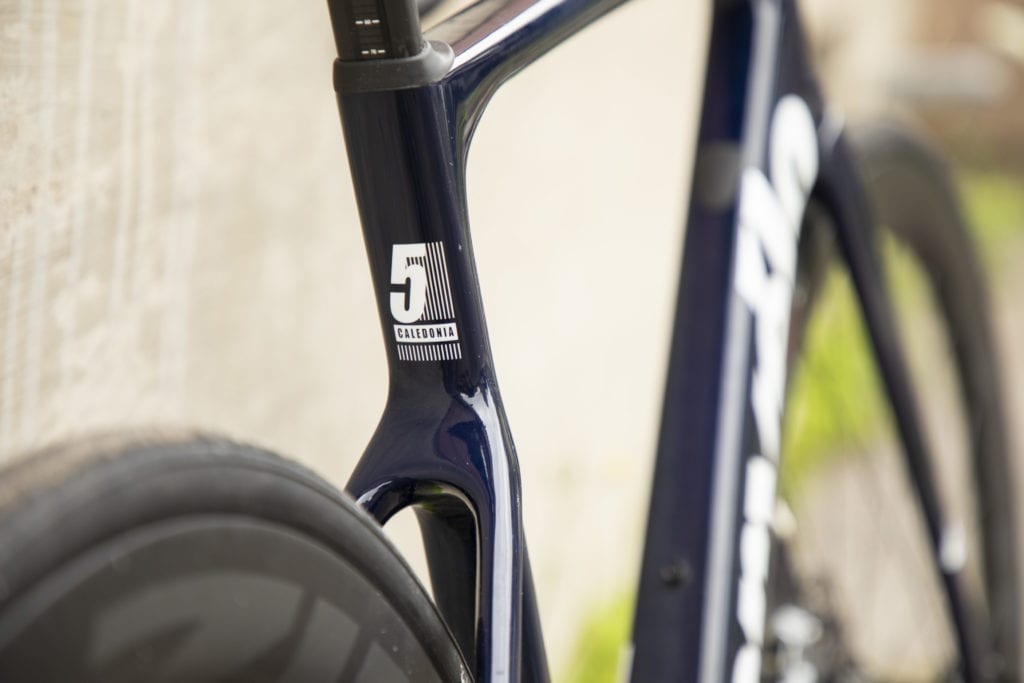 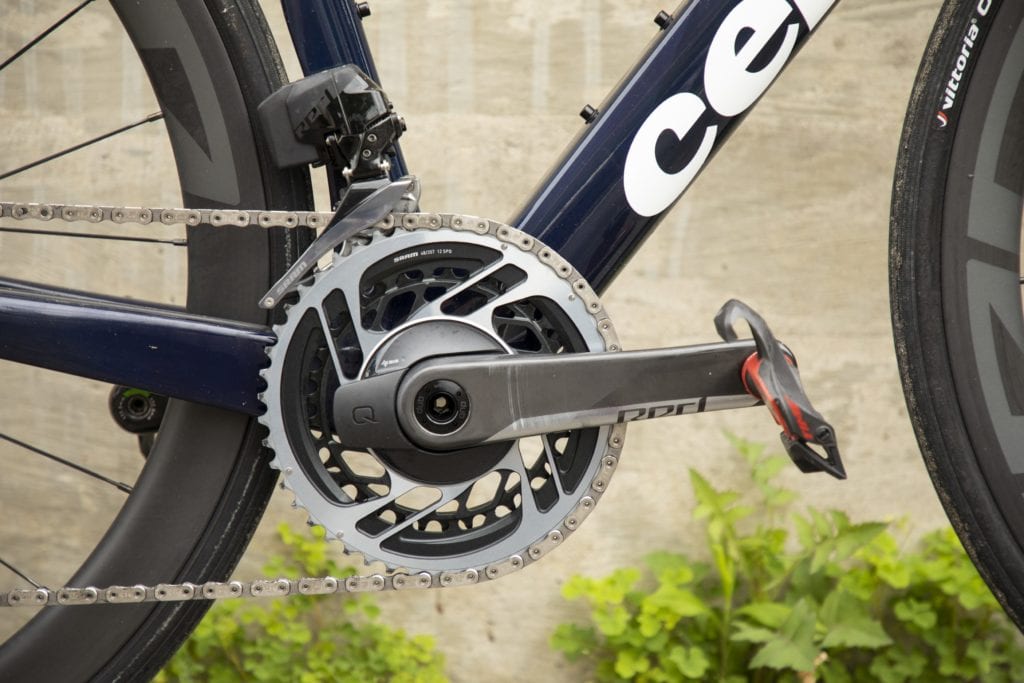 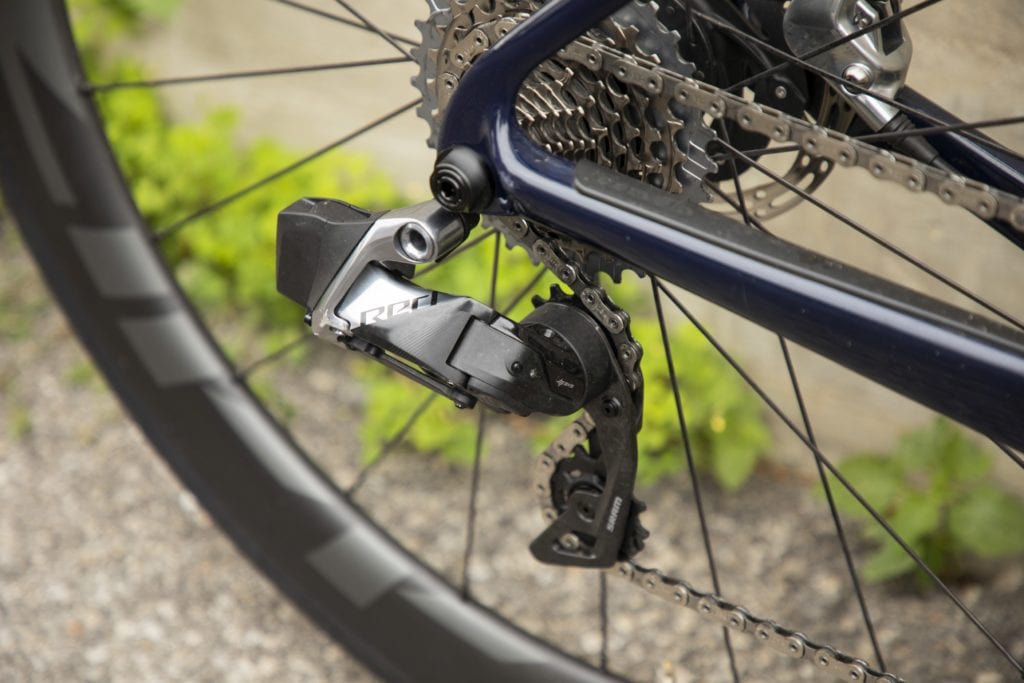 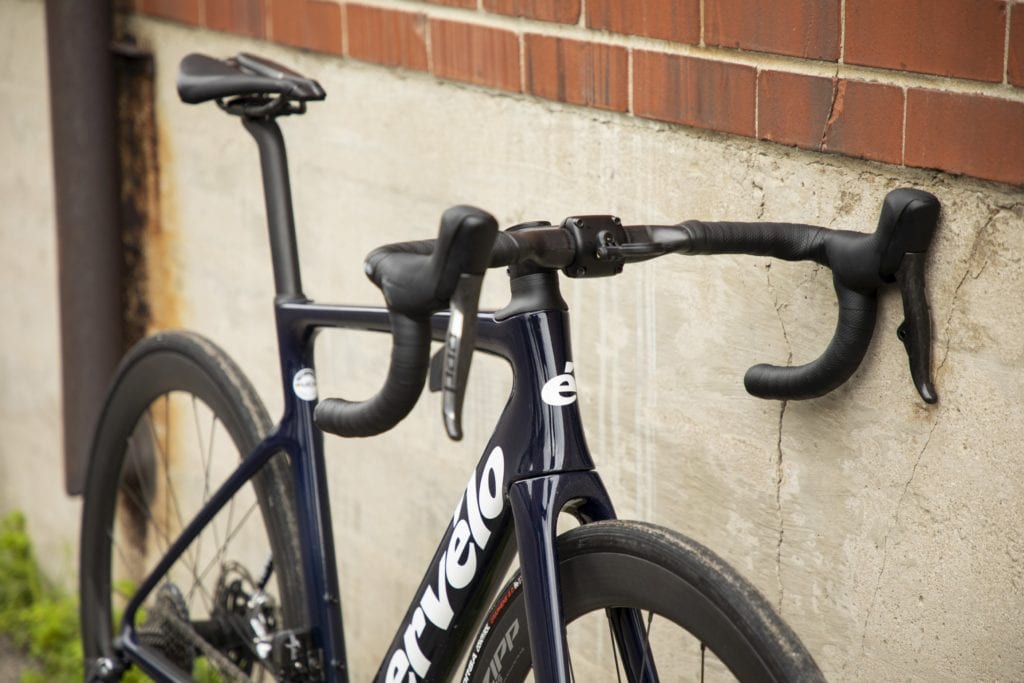 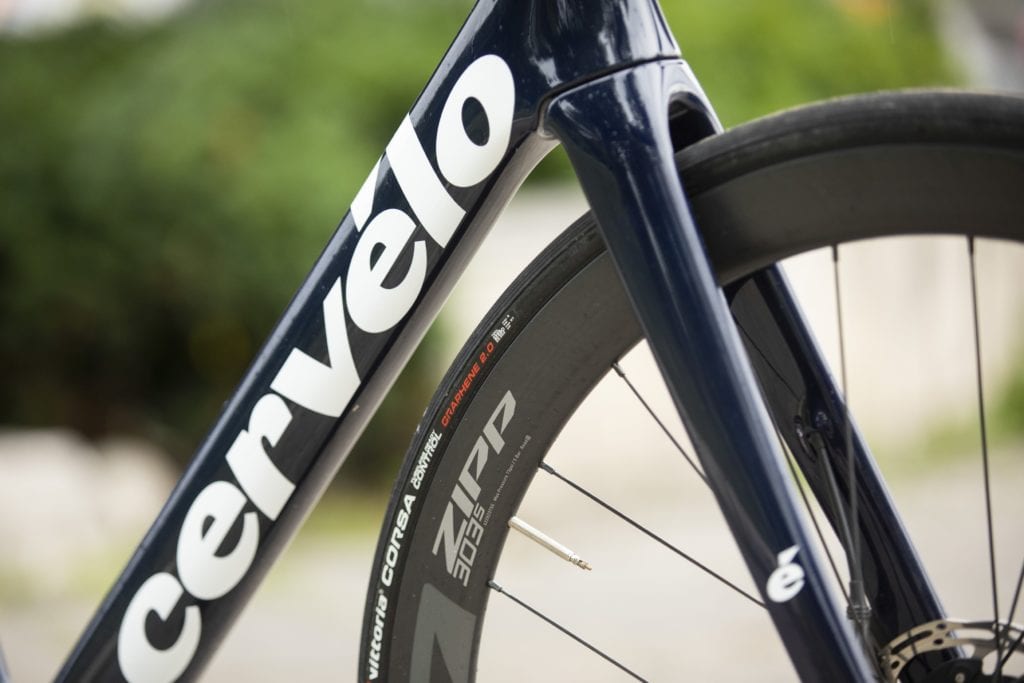 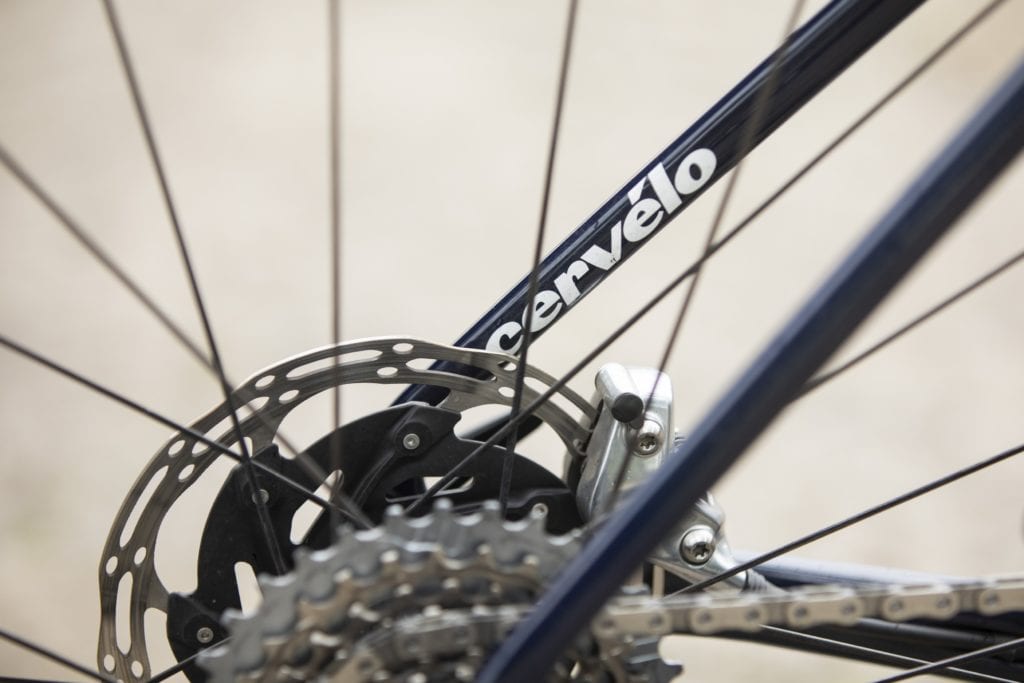 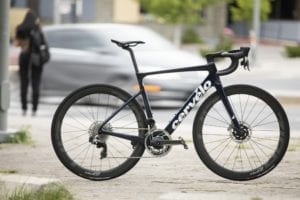 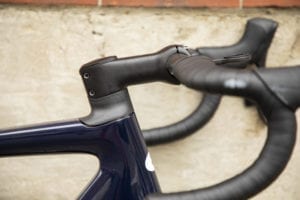 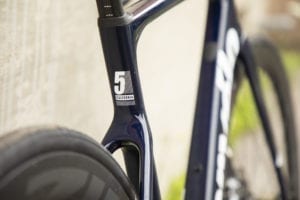 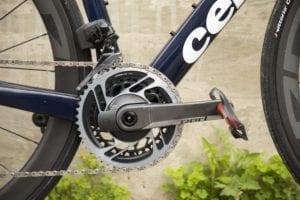 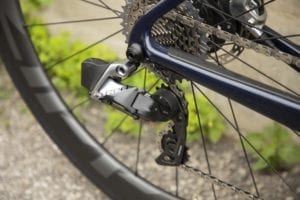 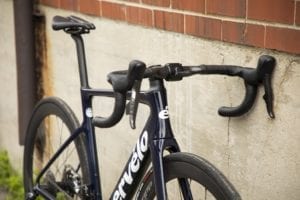 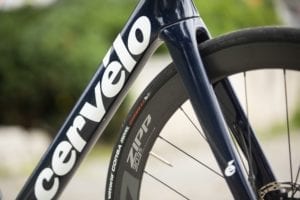 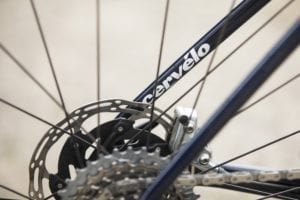 Of course, one of the best bump-management features on a bike is its tires. The Caledonia has clearance for 34-mm treads. The top-end Caledonia 5 comes spec’d with Zipp 303 S wheels running 28c Vittoria Corsa tires, which actually measure 29-mm wide.

At the front, the Cervélo AB09 Carbon bar and the Cervélo ST31 Carbon stem keep hydraulic brake cables and wires for electronic shifting all hidden away. There’s a bearing top cap that sits at the top of the head tube. The bike comes with one 22-mm high cap and one that’s 7-mm high. Pick whichever one will get you to the right stem height, while minimizing the number of additional spacers. You can add a total of 40 mm of spacers. If you find your fit changing, you can move spacers above or below the stem without having to re-cable the bike. Each spacer easily splits into two pieces.

While the Caledonia is designed to perform at Paris-Roubaix, and at Cervélo’s Hell of North Toronto, the bike is more than a machine for competition. It comes with a kit that not only contains mounts for your head unit and accessories at the back, but also fender mounts that attach at the ends of the thru-axles. You can add a seatstay bridge for the rear fender and affix the mud guard at the bolt hole located where the chainstays meet the bottom bracket. There’s a bolt hole at the top of the fork, beneath the down tube, for the front fender.

With the launch of the Caledonia line, Cervélo is offering two frames. The Caledonia 5 is the top-end model. The company says the painted frame weighs 936 g and the fork is 370 g. The complete SRAM Red eTap AXS build, in size 54, that I’m testing brought my scale to 7.74 kg. The second-tier Caledonia frame is said to weigh 1,031 g with a 432-g fork. The Caledonia gets a round aluminum 27.2-mm-diameter seatpost. Up front, there’s a more traditional bar, stem and steering tube setup, which means cables are more exposed. The second-tier frame does have a feature that the Caledonia 5 doesn’t: mounts on the top tube for a bag. Both models, however, are more than capable of handling a few flavours of gravel riding, as well as light bikepacking.

The top-end electronic drivetrain models—SRAM Red eTap and Force, and Shimano Dura-Ace Di2—come with power meters. The SRAM bikes get Quarq, while the Shimano gets 4iiii, a Canadian company that has Cervélo co-founder Phil White as its acting president. 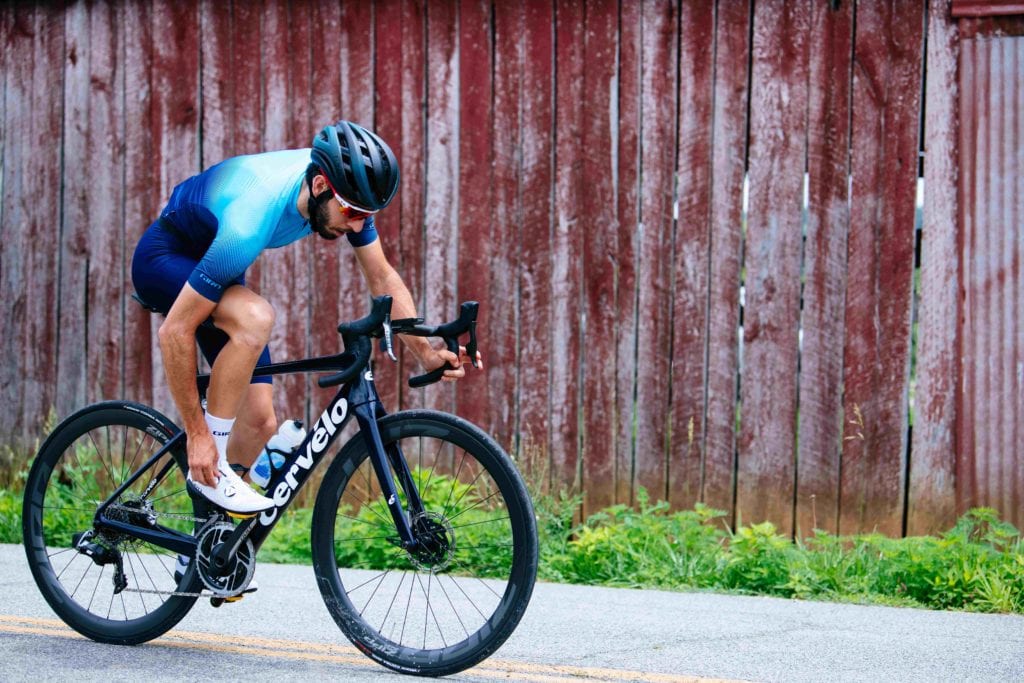 Who's getting ready for a sprint on the Caledonia? 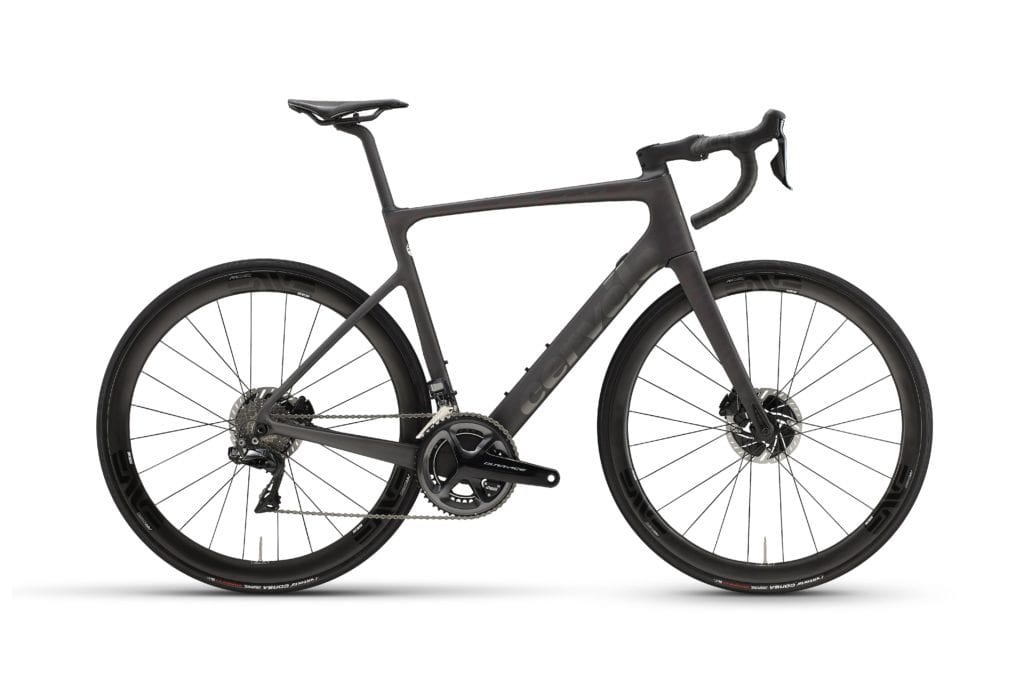 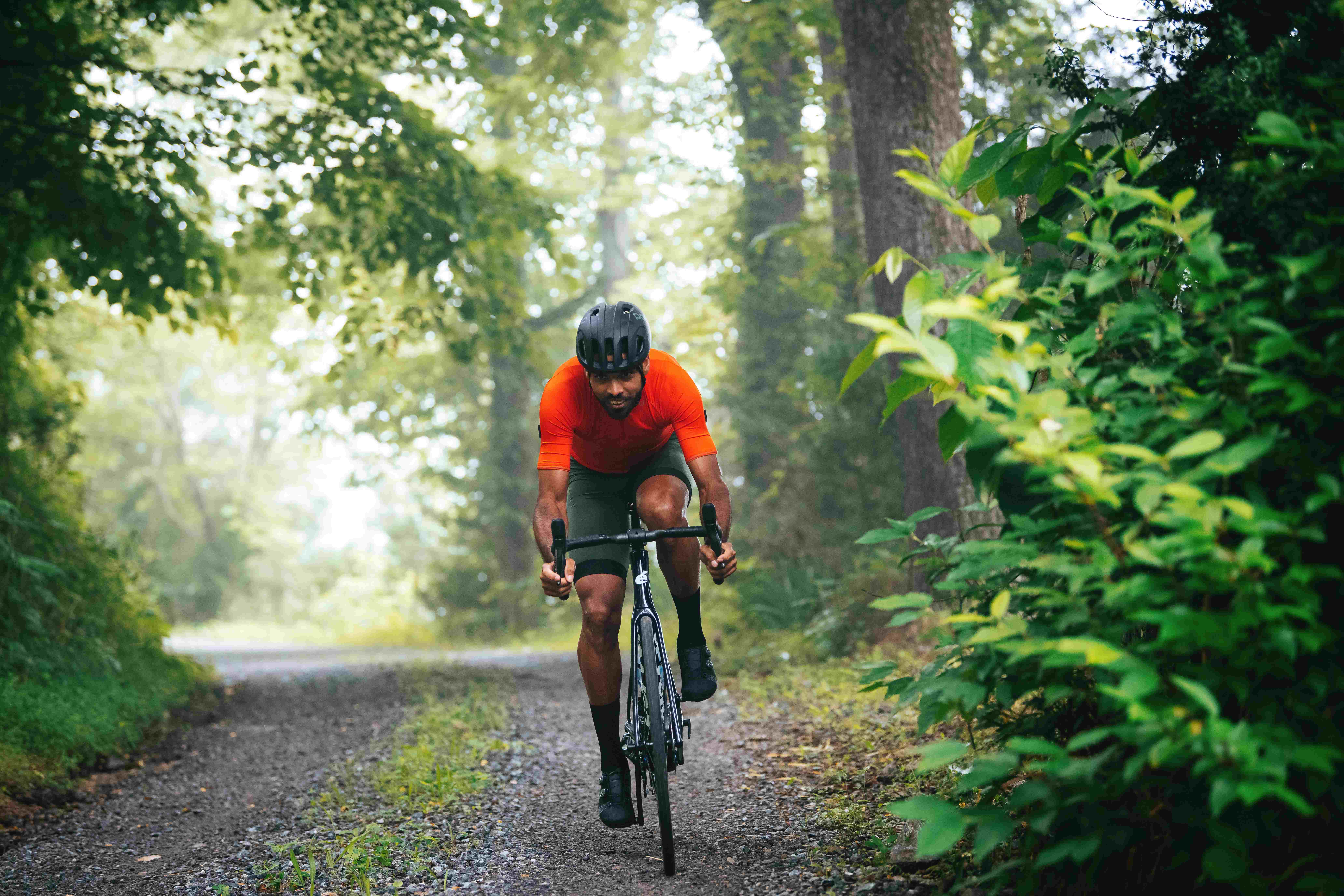 The Cervélo Caledonia is ready for a variety of rough surfaces. 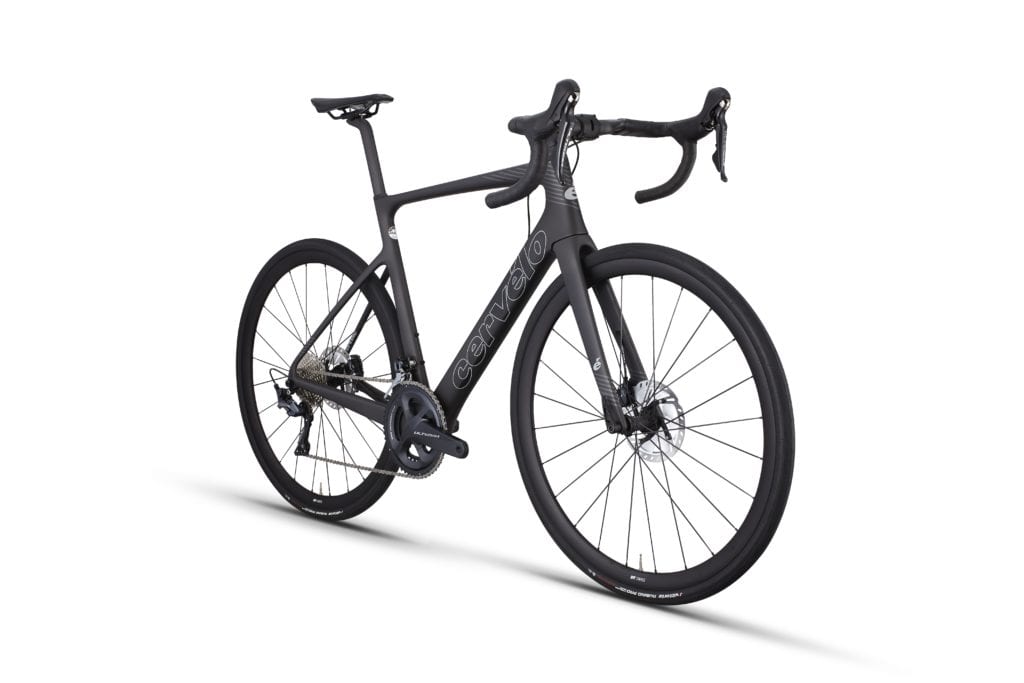 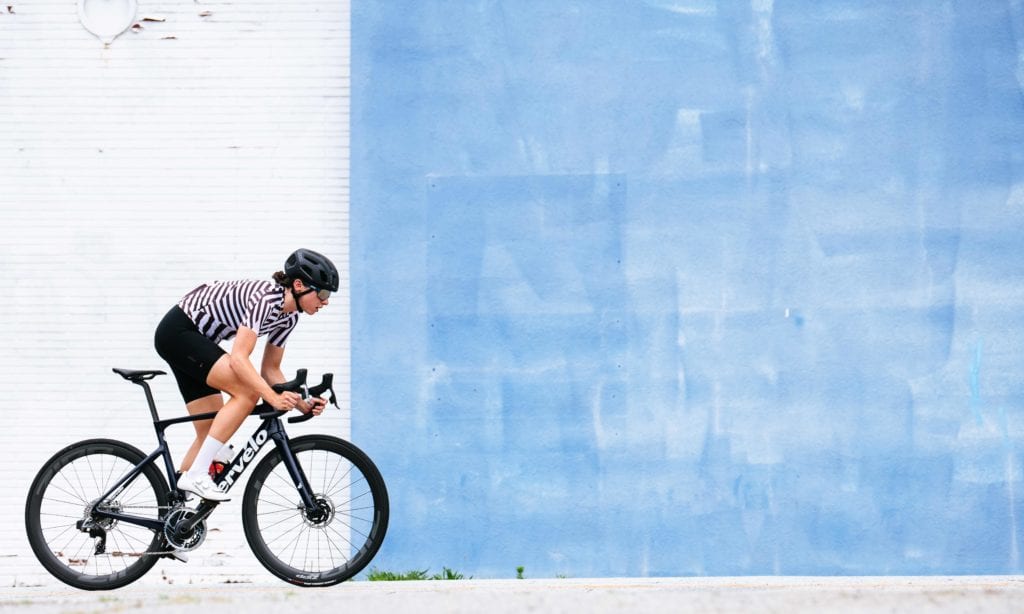 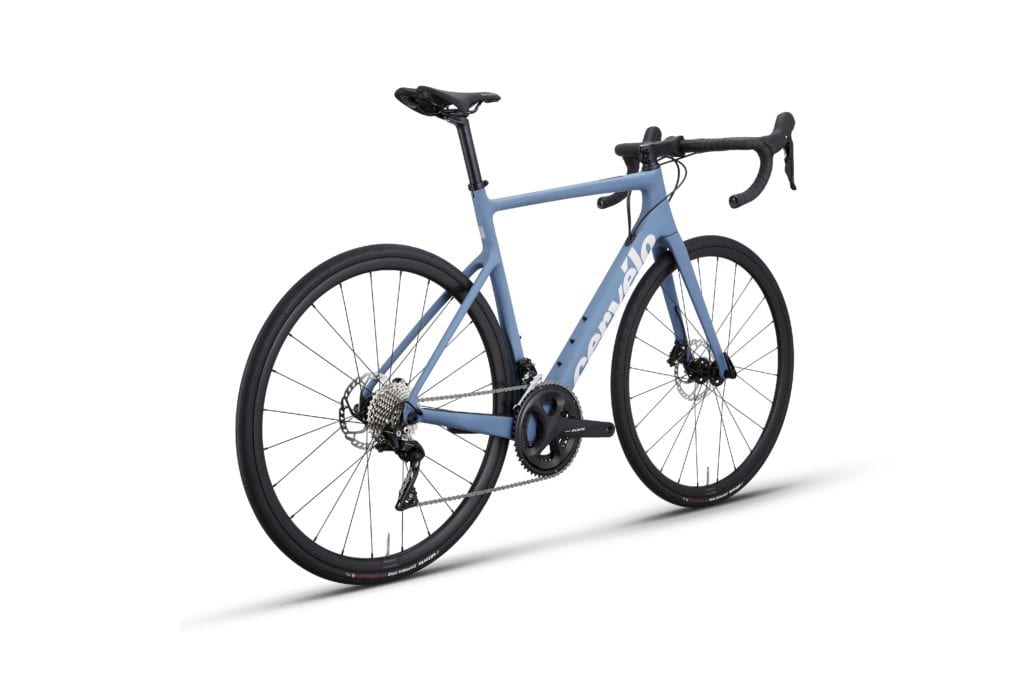 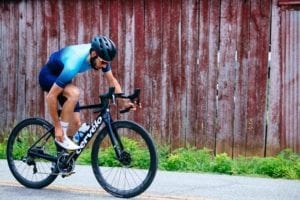 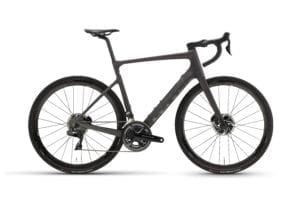 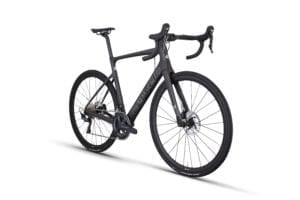 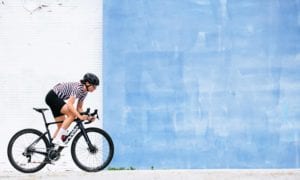 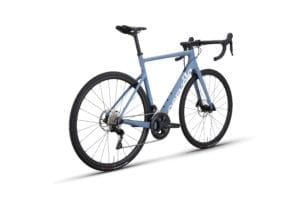 First impressions of the Cervélo Caledonia 5

The first thing I did when I got the Caledonia 5 SRAM Red eTap AXS bike was to take it on Caledonia Road, of course. It was busy. The southern end of the road really isn’t too bad, surface-wise. The real brutal sections are just north of Eglinton Avenue. They’ll rattle you no matter what bike you’re on. The real tests of the bike’s ability to deal with rough surfaces will come when I take it on longer rides.

Previously, I’d been riding more traditional climber’s bikes. By comparison, the Caledonia feels more stable. It’s steering isn’t as razor sharp as a classic road racer, but you’ll still make a corner with confidence. The bottom bracket stiffness and power transfer is dialed, as you’d expect from a Cervélo.

Once I got the bike home, I tinkered with the spacers at the stem. I pulled one from above the stem and placed it below. I got its two pieces around the steering tube that has the hydraulic hoses running in front of it. Now I have 20 mm of stack on top of the 22-mm high bearing top cap.

I dig the bike. And I really dig its name. It’s too bad, though, that Cervélo is celebrating the Toronto road that’s a company frenemy only now, as Cervélo is in the process of leaving. Yes, this is the last bike by Cervélo that will be wholly designed in Canada. The Toronto office is relocating to California. With the Caledonia name, Cervélo wanted to pay homage to the place, to the roads, where it came from. 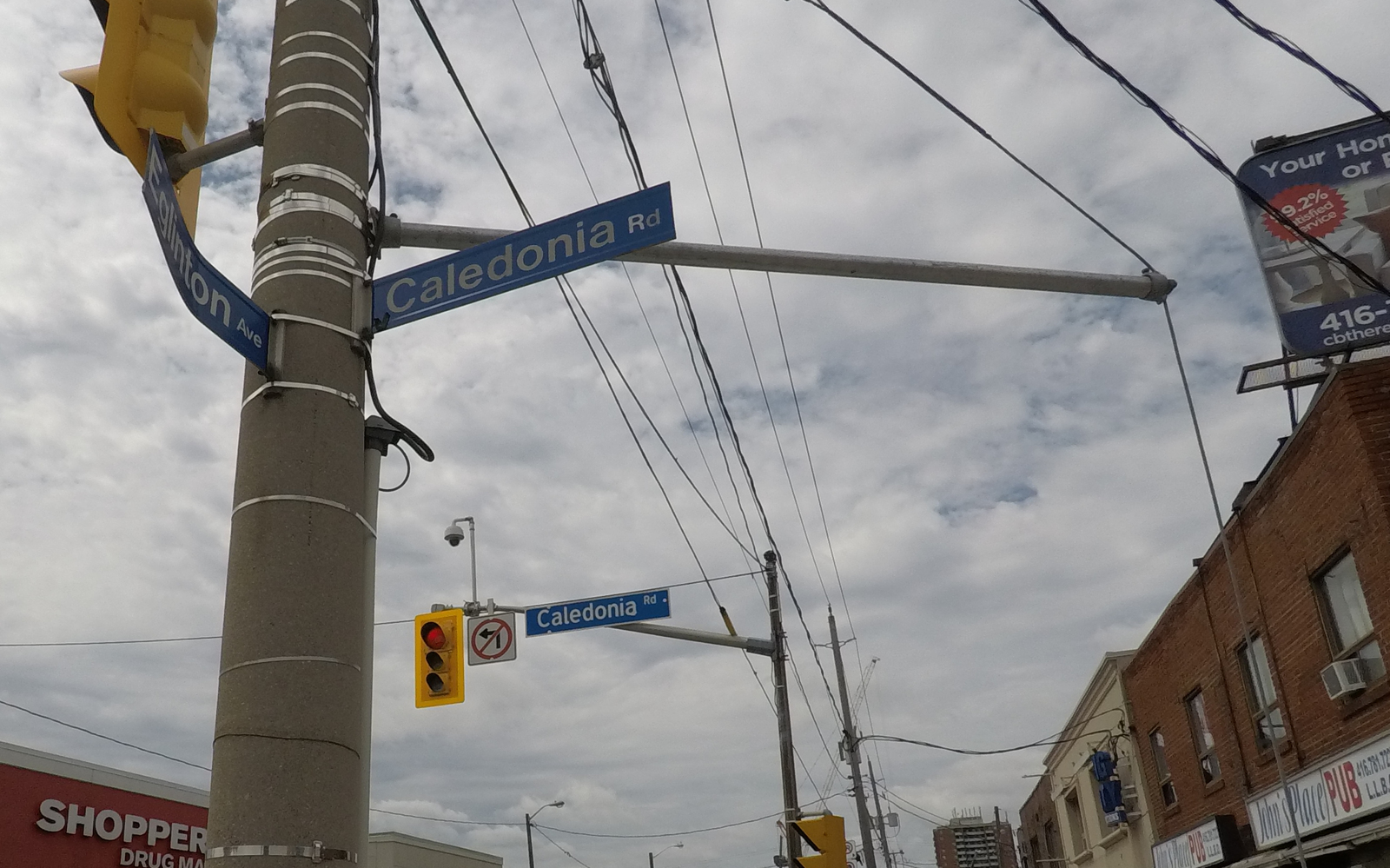