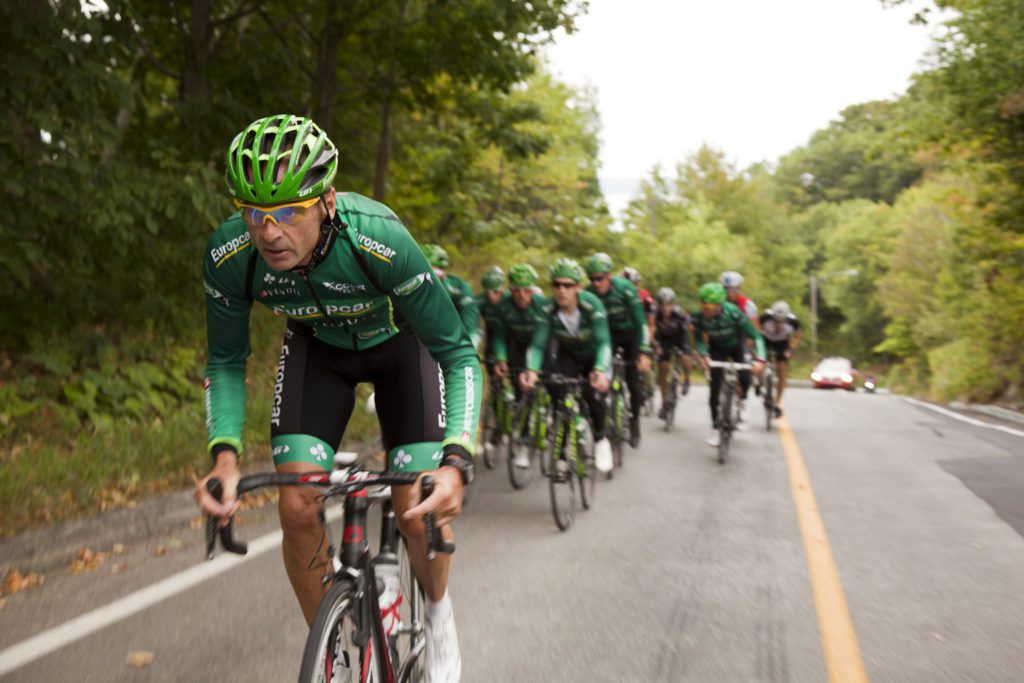 Louis Garneau is off the front of a Team Europcar ride in 2012. The team wore Garneau for five years 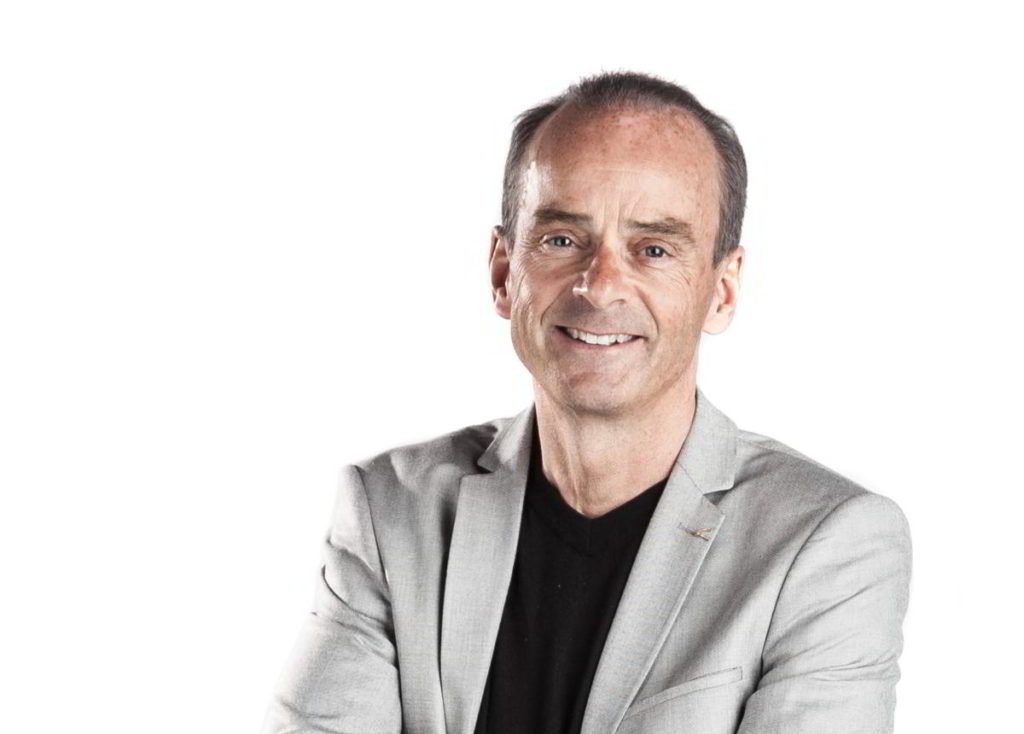 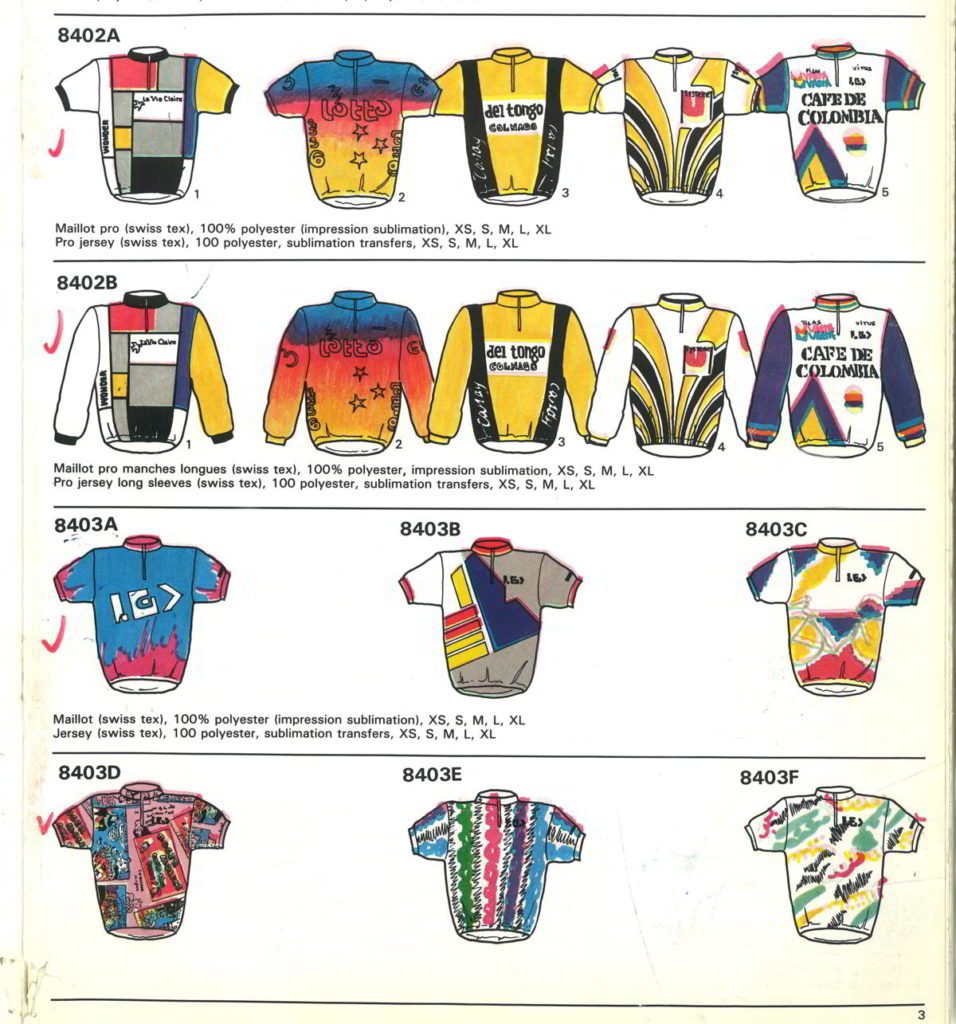 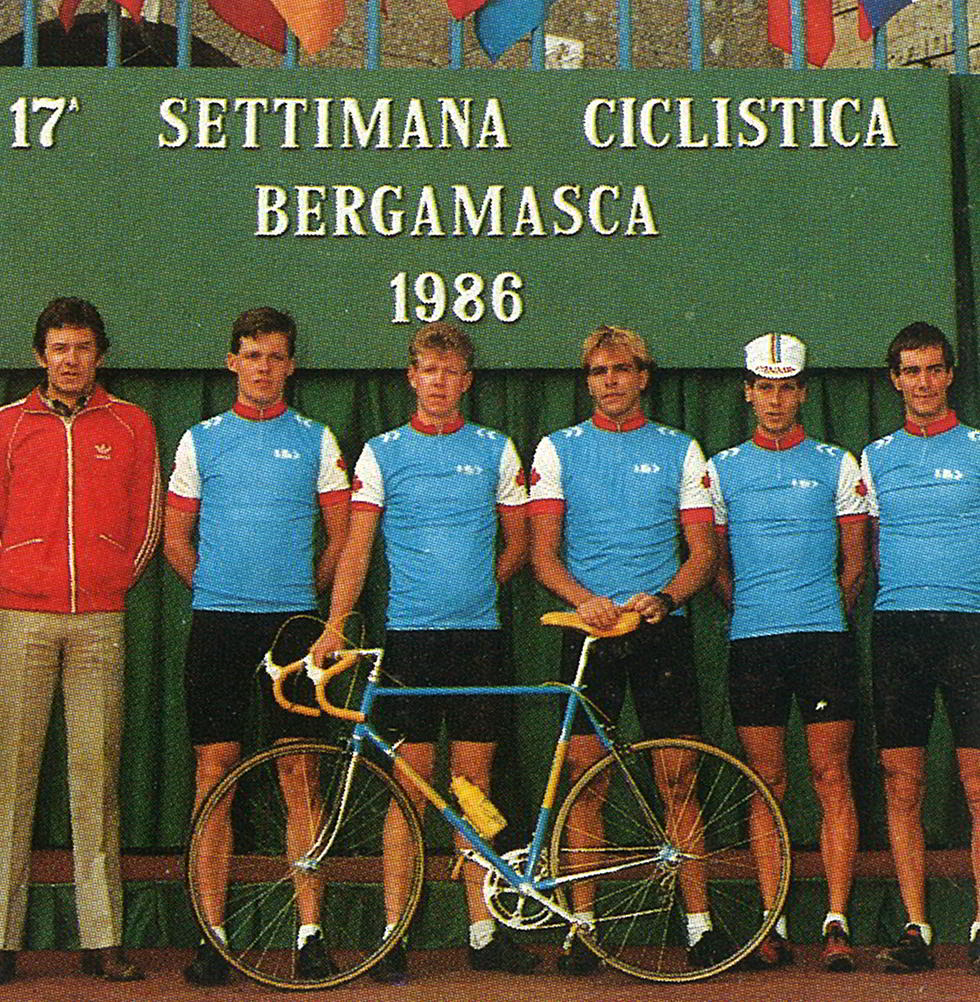 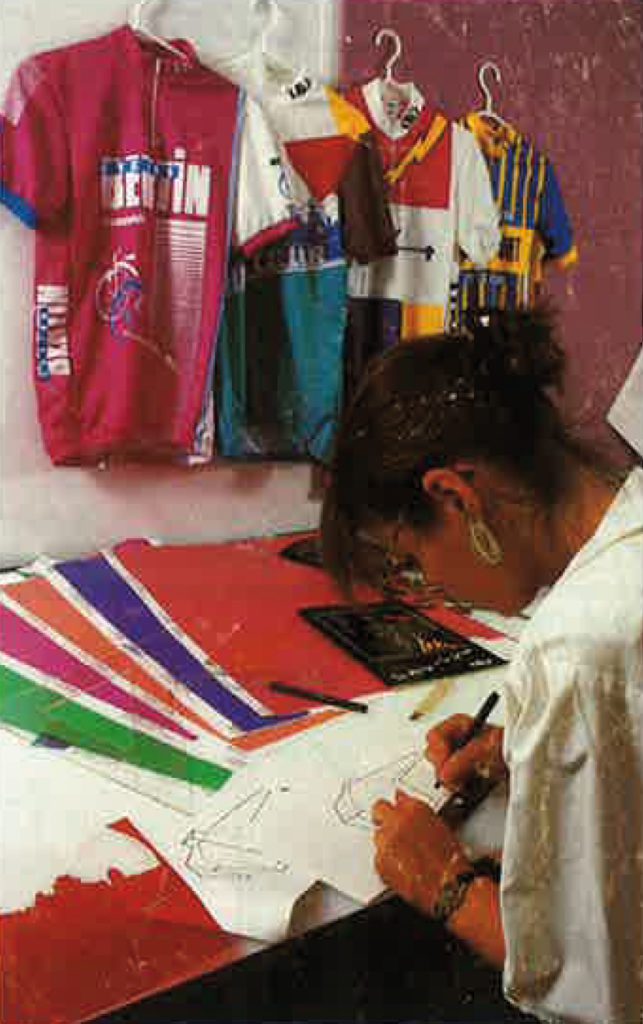 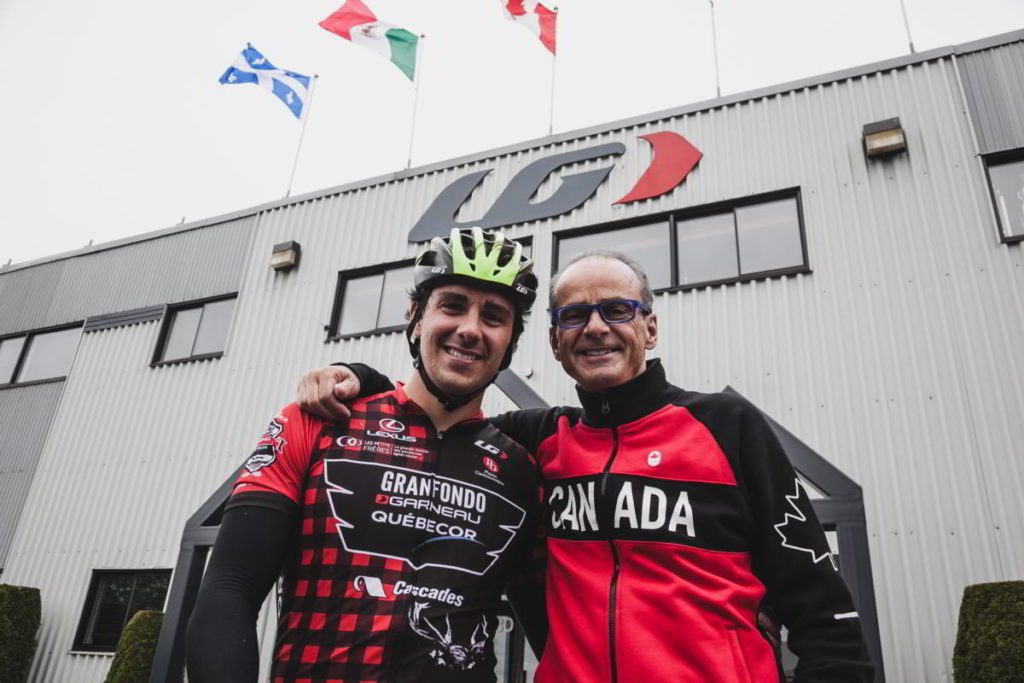 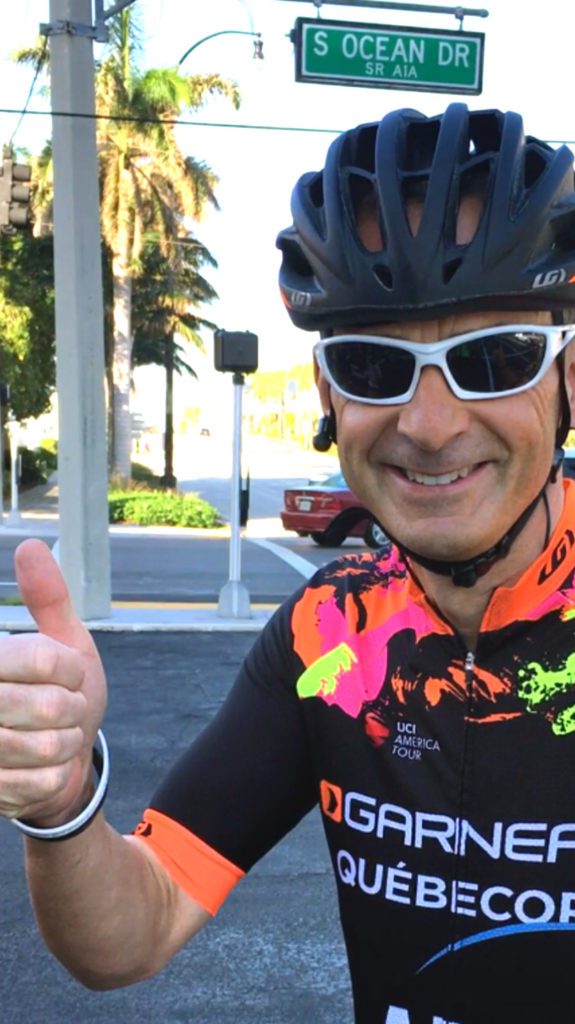 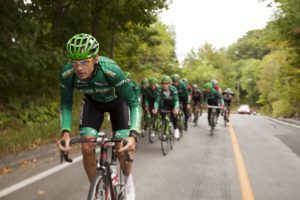 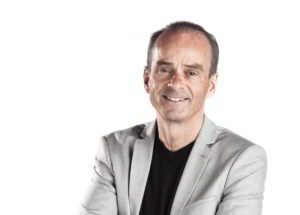 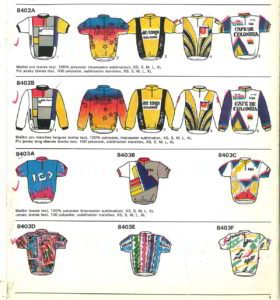 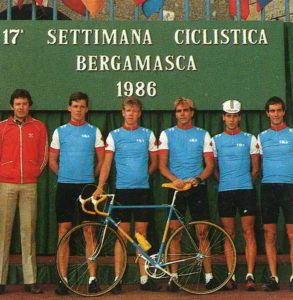 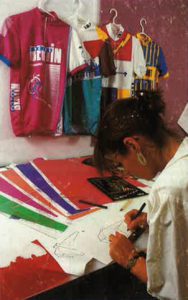 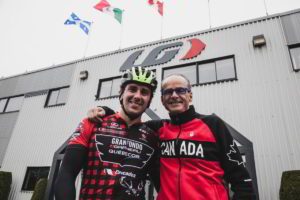 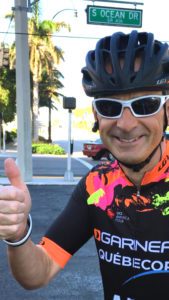 Louis Garneau took his first custom clothing order in his father’s garage soon after launching his cycling-apparel company in 1983. “We had no experience, no business plan and no money. What we did have is a good product at a competitive price. I think we survived because of our passion,” Garneau says and then adds on the experience of building the business with his wife Monique. “It’s a garage story.”

Today, Louis Garneau offers a range of cycling products as well as gear for other sports, including bikes, accessories, apparel and helmets. The company still does custom, but the process has changed since the first cyclist walked into the garage asking for a blue jersey with a yellow stripe across the chest.

Garneau’s first business was making furniture and wooden toys in his father’s garage. The switch from wood to Lycra came in 1983. Garneau realized that if he could make furniture, he could figure out how to make cycling clothing. Monique, his girlfriend, was not able to help Garneau when demand for his furniture was too high and he was out of the country training for cycling competitions. The switch to clothing may seem drastic, but Garneau knew cycling as an athlete aiming to make it to the 1984 Los Angeles Olympics. He wanted to offer apparel cheaper than the expensive pieces that were coming over from Europe. After duties, bibs would set you back $80. Garneau could sell a pair of bib shorts for $25 a piece to his teammates. Garneau was also still studying fine arts at the University of Laval full-time.

“I was 25 years old. I was afraid of nothing and I had a lot of energy,” Garneau says of those early days during which he and his wife started making bibs not only for himself but also his teammates in the national program. Monique, who worked as a nurse, had the skills to sow the first pairs of shorts in time for the 1983 edition of Il Giro d’Italia, an Italian amateur stage race Garneau was participating in.

Garneau himself was his own first customer. Every night from Italy, while racing the Giro, he would call Monique and give input on the fit. He continues to do this 34 years later riding in and trying on all the new pieces of apparel.

In 1984, Garneau’s Olympic aspirations became a reality. He raced in the road race on July 29. He finished 33rd in the field of 135. His teammate Steve Bauer finished second. After the Olympics, Garneau retired to focus entirely on making cycling apparel. Two months later, on Sept. 29, he and Monique were married. He also finished his schooling and was thus able to direct all his time and energy to the company.

“We told ourselves if we could sell 12 jerseys and 12 shorts a month we would survive. Monique was a nurse and her salary covered our overhead,” Garneau explains. “Everyone was surprised we were doing this. I didn’t expect to become a big business man with 400 employees. I had no vision: I just wanted to make good cycling clothing.”

The market was green and Garneau’s operation started to grow. Using colourful styles on his apparel, something that had not yet become popular, the company began to employ more seamstresses and demand began to exceed what the garage could handle.

Garneau delves into the sublimation process

In 1984, Garneau set up a factory in Quebec City to handle the increased demand. But the owner was already looking ahead. Later that year, he travelled to Italy to learn about a fabric-printing process he’d heard about: sublimation. The process involves the thermal transfer of colours onto fabric making it possible to print designs on fabric without seams. Garneau returned from his trip with a better knowledge of the process and began trying it out on his own apparel.

The introduction of sublimation didn’t go entirely smoothly, however. Garneau recalls, “If we did 100 jerseys, 50 were for the garbage because of stains and other problems, My account man told me that if we continued like that we’d be out of money in six months.” But the company continued to expand from 10 employees to 12 and then to 15 in the span of a few months. Some of these employees were brought on to improve the sublimation process. Before too long, the company was printing custom designs on its apparel with great success. “Finally, we found out how to do the technique properly and now design was important,” says Garneau. “The collection at the beginning was very artistic.”

The achievement was important for Louis Garneau as the first North American cycling apparel company to use sublimation. The company hit another growth spurt after the introduction of the technique. In 1988, expansion included the building of a factory in the industrial park of Saint-Augustin-de-Desmaures. It was risky. Garneau recalls it was a leap of faith more characteristic of an experienced businessman. “I earned my MBA in cycling. As road captain, I constantly had to motivate riders, devise strategies, hide my weaknesses from my adversaries, make an effort to communicate intelligently with the media and find ways to detect potential cheaters,” Garneau writes in his 2012 memoir Louis Garneau: Never Give Up.

Despite an economic recession in Canada in the early ’90s, Garneau decided to expand the company into the United States, opening a factory in Vermont. But with declining apparel sales, Garneau had to be innovative once again. He create a new product.

“My new idea for surviving was to create helmets. We were the second in Canada to do helmets,” Garneau says. “I had no experience. It was same as cycling shorts, which, when we started, we had no idea how to cut. It was trial and error and more trial and error until we found a solution.” In 1992, the LG-12 monocoque helmet was being praised for its low weight and ventilation.

“After helmets, we started making accessories, shoes and today, even bikes under the Louis Garneau name. Under one brand, we offer a full cycling solution,” he says.

Louis Garneau products have gone on to be worn for five years at the Tour de France with the Europcar, a UCI pro continental team that had WorldTour status in 2014. Garneau continues to make the clothing for the Canadian national team. This year, the company announced a four-year extension on its agreement with Cycling Canada that will continue the partnership to the 2020 Tokyo Olympics. Garneau also continues to offer custom apparel. “Our DNA is a capacity to do one product for one person like it was in my father’s garage when we started. We do bicycle custom through to jerseys and helmets.”

Apart from offering elite athletes apparel that performs well, Garneau feels it’s important to have products for riders like himself, business people who want something comfortable with a lot of freedom of movement.

Today, Louis Garneau has a factory in Canada, a plant in Mexico, 75 suppliers in Asia and sells his products in 50 countries. The market has changed drastically since the company launched in the garage in Quebec City. Still, Garneau is confident he has assembled a strong team around him. “I didn’t expect this story when I started 35 years ago. I created my own job so I didn’t need to work for anybody in life. I am in business by accident. My first goal was to be an artist.”