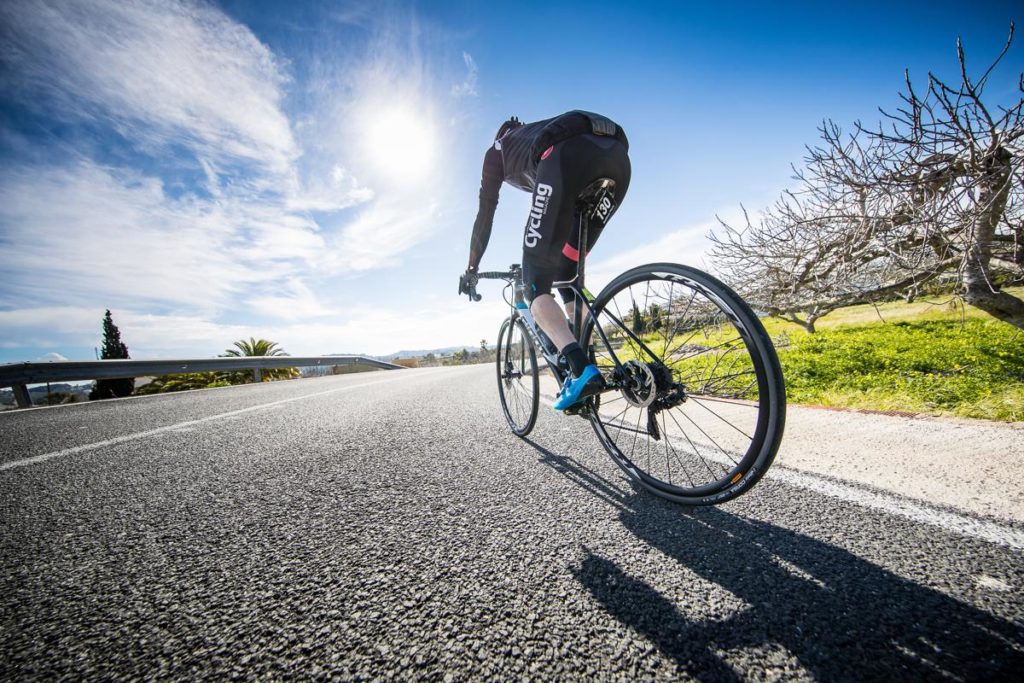 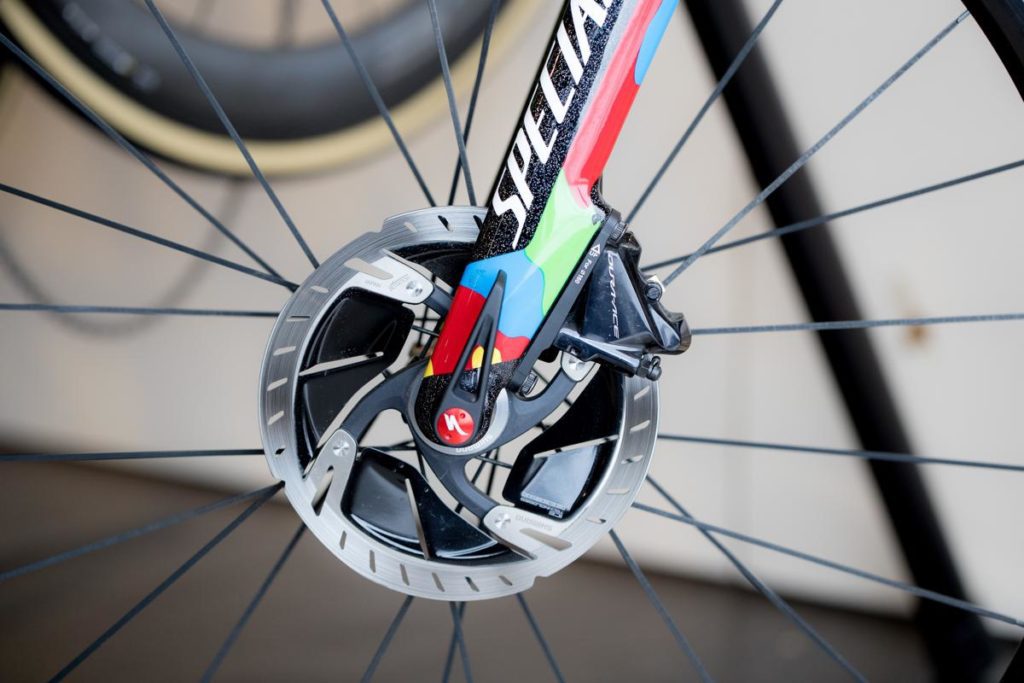 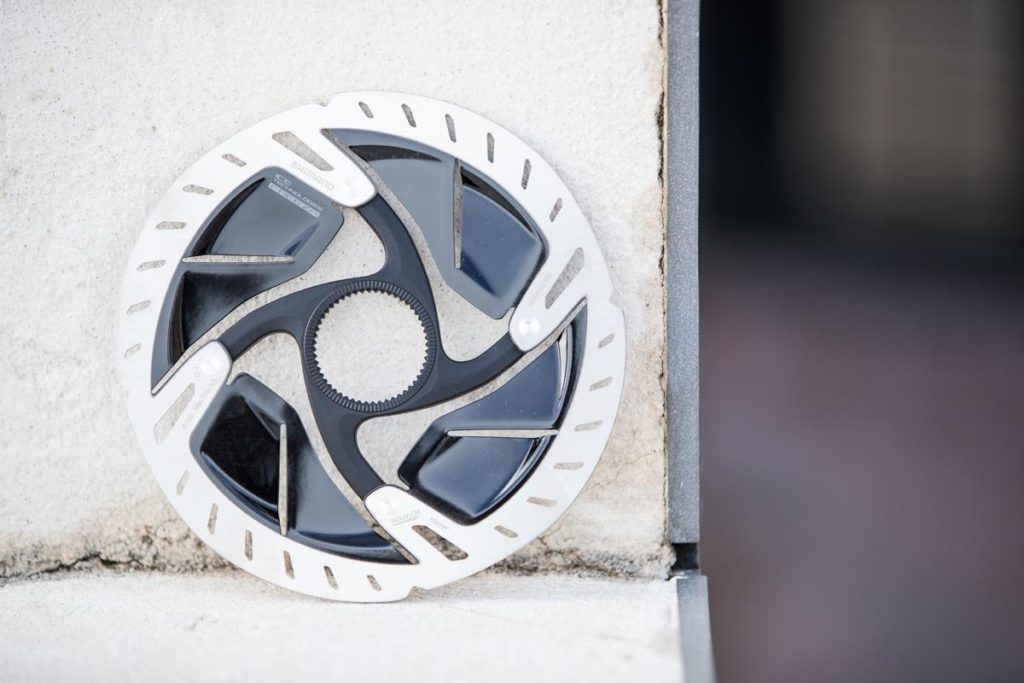 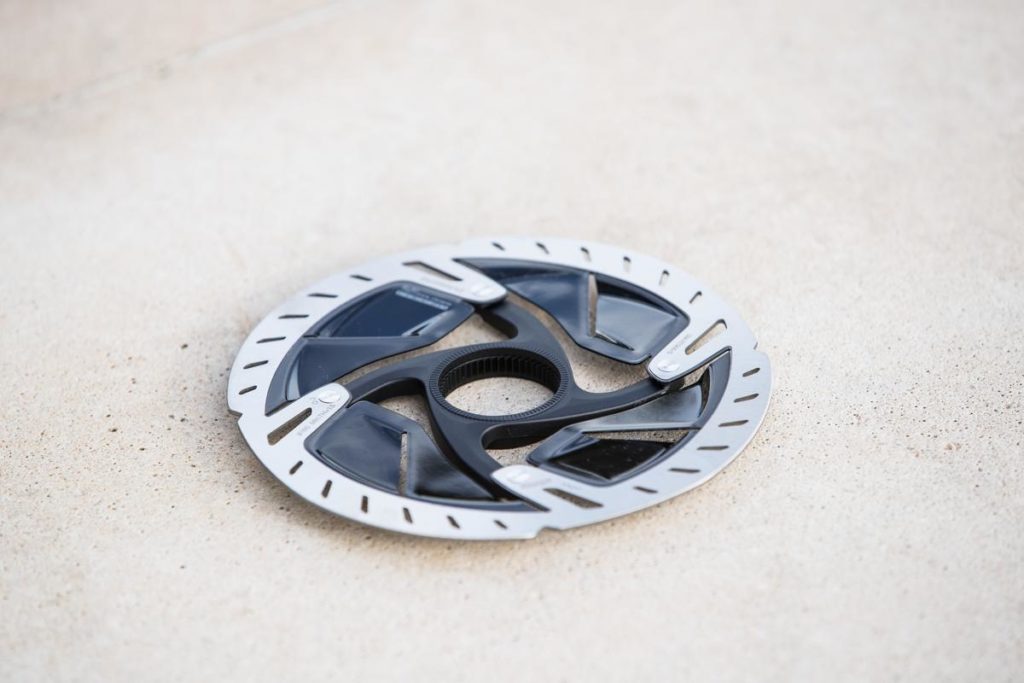 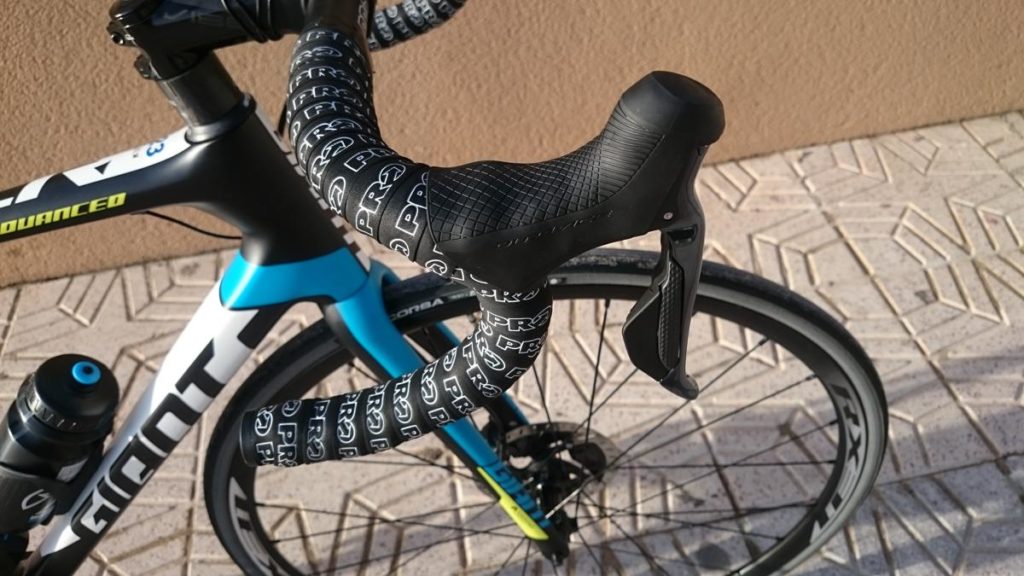 The Dura-Ace ST-R9170 levers modulate the calipers of the disc-brake system. 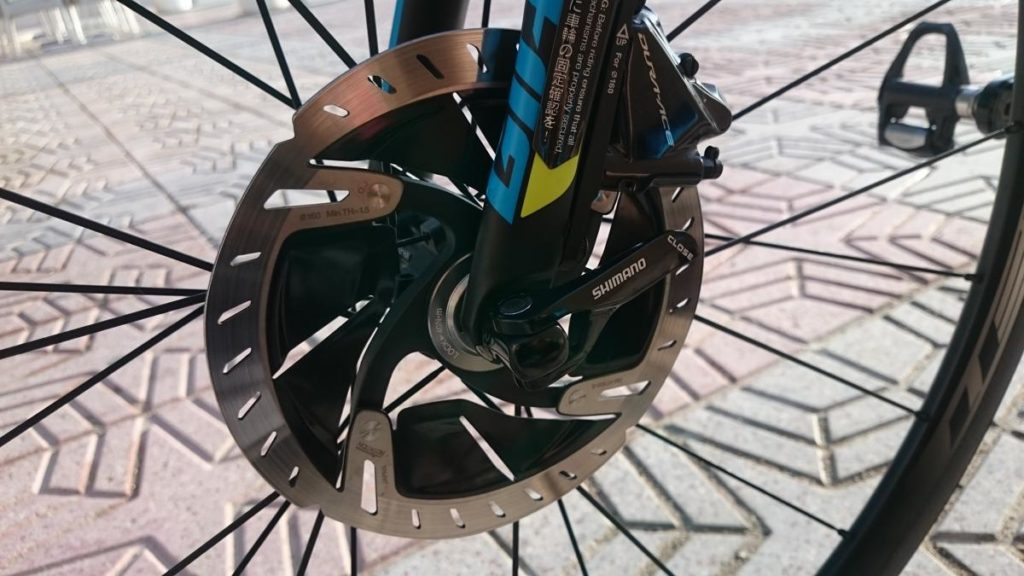 The Dura-Ace SM-RT900 centre-lock rotor and BR-R9170 hyraulic disc-brake caliper on the fork of a Giant TCR Advanced. 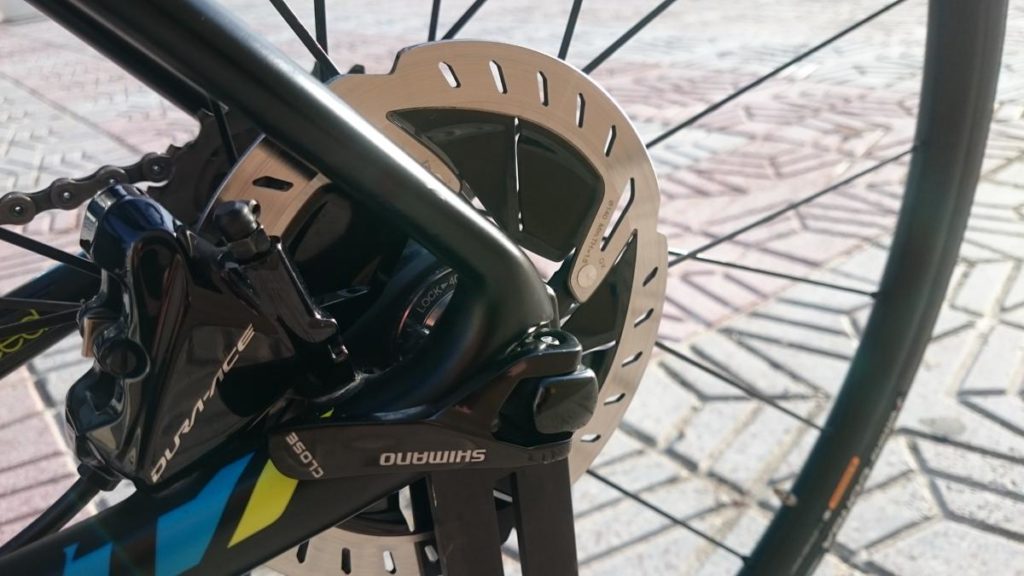 The Dura-Ace SM-RT900 centre-lock rotor and BR-R9170 hyraulic disc-brake caliper at the back of a Giant TCR Advanced. 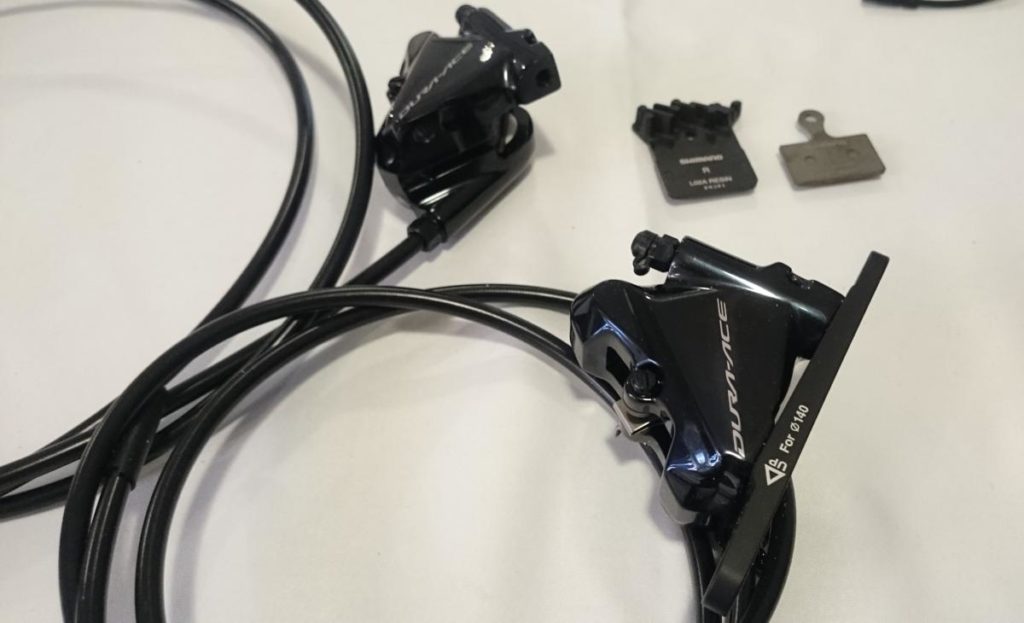 The Shimano Dura-Ace BR-R9170 calipers and their cables. The caliper pads sit toward the back. 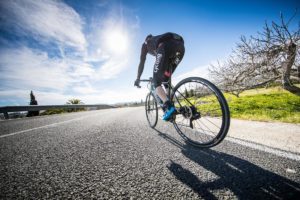 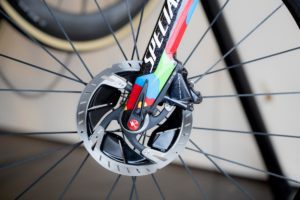 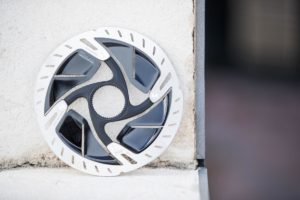 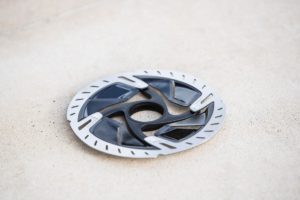 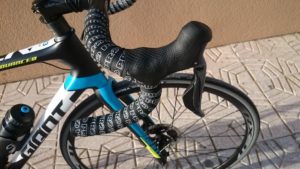 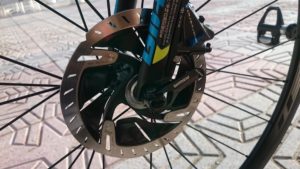 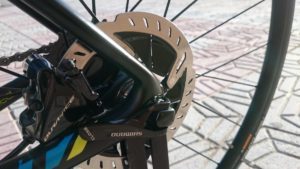 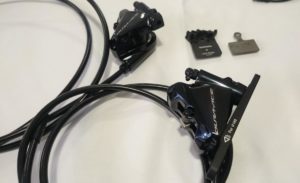 Recently, as my group rode the hilly roads around Calpe, Spain, we saw many pro squads out for their training rides, such as Team Sunweb and Quick-Step Floors. We were riding components that were developed for the riders by Shimano, but many hadn’t tried the gear yet. One of those technologies was the new Shimano Dura-Ace R9100 hydraulic disc brakes.

Prior to June 2016, the Japan-based company already had rotor systems for road, but they weren’t part of any of the recognizable lineups, such as Ultegra or 105. But just before last year’s Tour de France, Shimano announced that its revamped Dura-Ace group would feature its own disc system. The company felt the need to make a Dura-Ace-specific disc-brake system because the pros needed them.

“We wanted to follow their requirements so that our product could be raced,” said David Lawrence, road and pavement product manager for North America, part of Shimano’s global road product team. “When we started the development process of the new group three years ago, we wanted to build the disc-brake system from the ground up. The idea was that road racing would embrace disc at some point – we knew that it was coming, that it was part of the future. We wanted to make sure Dura-Ace was there and was the best.”

The process of bringing of disc brakes into elite races hasn’t been smooth. At the 2016 Paris-Roubaix, Francisco Ventoso of Movistar said he received serious cuts in his leg because of contact with a rotor. Soon afterward, the UCI suspended its trial period for the technology. Recently, riders have been back on discs. In January, Tom Boonen won a Stage 2 of the Vuelta a San Juan in Argentina with disc brakes on his bike. During my stay in Calpe, a product tester who’s friends with many pro riders confided that pros are still ambivalent about the presence of rotors. They’re not opposed to new developments, but they want to make sure that components are, in fact, safe. They already do a dangerous job. In the words of the tester, “They don’t want to be guinea pigs.”

During my two days of riding in Calpe, I spent one day on a bike with new Shimano Dura-Ace direct-mount rim brakes. On a 6 km descent of the Coll de Rates, the caliper brakes performed excellently as I modulated my speed for the twists and turns. The next day, I was happy, however, to be on the new disc brakes. Our twisty 9 km descent to the town of Xaló had damp patches from rain that had fallen earlier. The power and modulation of the disc brakes was superb and confidence boosting as I navigated hairpins. During the descent, a fellow tester aired his frustration with is rim brakes and missed the disc-brake-equipped bike he had ridden the day before.

While I don’t think Lawrence heard my colleague’s grumblings, something the product manager said later spoke to our experience. “During our development of the system, we knew that there are other types of riding that require disc, not just road racing, everything from gravel to endurance bikes. It was clear that people were already looking for better braking systems and not specifically for road racing.”

The Dura-Ace system uses new flat-mount calipers, which are smaller and lighter than previous Shimano offerings. The BR-R9170 calipers are said to weigh 256 g per pair, while the older BR-RS805 calipers are 289 g per pair. Shimano now recommends running a 160-mm diameter rotor in front and 140-mm diameter rotor in the back mostly so riders do get much greater stopping power out of the system. Each disc uses a new configuration of Shimano’s Freeza technology: an “aluminum sandwich” between layers of stainless steel. The aluminum in the rotor, with its fins and larger surface area compared with previous Freeza-based discs, draws away heat generated during braking and dissipates it. Shimano says the new Freeza reduces heat by 30 C more. The company, in its dealer manual, says the technology also increases braking force durability and pad life, both by 20 per cent. The edge of rotors are rounded slightly to meet new UCI rules for discs in the pro peloton.

Apart from the performance of the components, esthetics was also a big consideration for the new Dura-Ace setup. “With flat-mount calipers, the new rotors and the new size and shape of the ST levers—they really make a difference when you see the whole bike laid out,” said Lawrence. “It looks and feels like a road racing bike. I think for a lot of people, that was one of the emotional hurdles they had to get over as well. When you pair these new rotors up with a nice deep section wheel, it looks pretty sexy, I think.”

The design of the levers that Lawrence mentioned, the ST-R9170 for hydraulic Di2, was strongly influenced by input from the teams. With the previous hydraulic levers for road, the riders didn’t like the different feel with the components’ tall lever bodies and different reach. Now, the disc-brake levers are quite similar to their rim-brake counterparts.

With the new Dura-Ace disc brakes, Shimano has the performance, and the look, nailed. They work for the pros, but can provide a stunning ride experience for the rest of us.