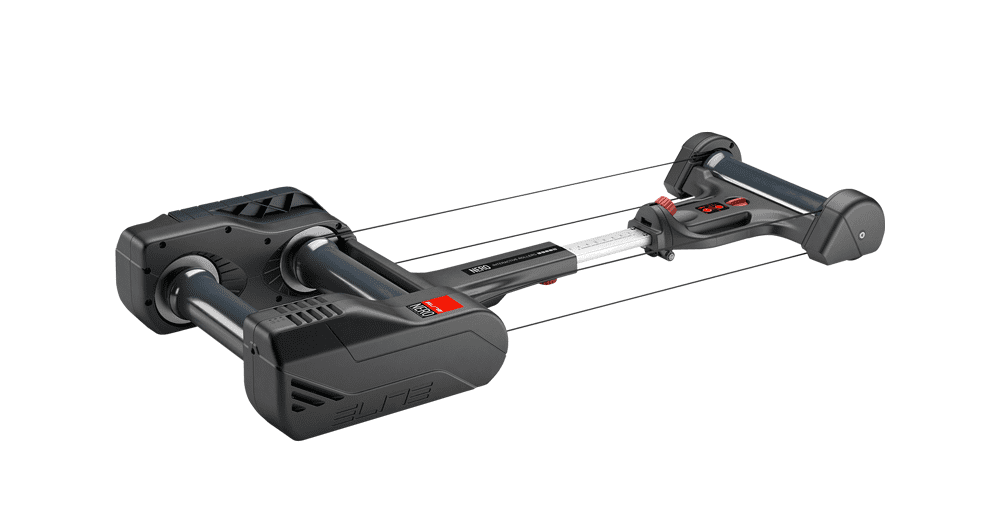 Unpacking the Elite Nero rollers I was more nervous than I’d like to admit. I’ve watched so many fail compilations of people flying off rollers and crashing into the floor that I assumed that’s what would happen to me. Was it my turn to wind up on YouTube? I wasn’t reassured when a few friends reacted with, “Oh, get someone to film it for me!”

To ease my mind, I spoke to Andrew Randell, coach and co-founder of The Cycling Gym, about the benefits of rollers and what I should expect. “Rollers refine your ability to keep your bike in a straight line,” said Randell. “Lots of people these days are putting out great watts but have no bike handling skills.” Co-ordination is important not only for safety and stability but it also affects fueling. If you can only open a bar or a gel at a stoplight, you risk performing suboptimally because of dehydration or running out of glycogen stores. The return to the road after a winter on the trainer can be a weird time, and the thought of easing that transition with some trainer work over the winter appealed to me.

Using rollers for the first time: Balance and stability

I walked around the office nervously giggling and announcing that I would be trying to use rollers later that day, trying (and failing) to project an air of confidence. Randell told me the best way to start on rollers is within a door frame. Set the rollers up so that your shoulders will tap either side of the frame If you fall over. While this advice seemed very logical, I had no door frame where the surface of the ground on either side was the same height, so I had to improvise. I placed the trainer by a wall and an assistant on the other side of me, like a human/wall support system.

I set the bike up so that the front drum was very slightly in front of the front axle. I pumped my tires to approximately 90 p.s.i. and before I got on I shifted the bike into a lighter gear. Randell recommends a light gear to begin but not so light that you spin out.

The integrated footrest on the side of the Elite Nero Rollers was helpful when I got onto the bike for the first time. I have somewhat shorter legs, but with the help of the footrest I was able to hop up onto the bike with relative ease. I chose to wear running shoes during my initial rollers attempt, even though Randell said it was probably not necessary. I wanted to make sure that if I slipped off I could put my foot down quickly. Sitting down on the bike, I grabbed the wall and my front brake. I took a deep breath, released the brake and started to pedal. The bike immediately slid around a little but I didn’t fall over like I had imagined. After about a minute of psyching myself up and chickening out two times, I took my hand off the wall and lowered it onto my handlebar. I swerved a little but I recovered. Staring intently at a box of June/July 2017 Canadian Cycling Magazines a couple feet in front of me, I realized two things. First, I was actually pretty stable. (Stable while pedalling that is. Any other type of movement was out.) Second, I hadn’t breathed since I let go of the wall. I exhaled and made a weird nasally noise as I tried to centre myself without over-steering. A few people came to watch my first attempt. I muttered answers to their questions as I maintained intense and unbreaking eye contact with my June/July 2017 magazine box. I continued to pedal. Suddenly, 10 minutes had passed and I hadn’t yet fallen on my wall or assistant. In fact, one side of my pseudo-door frame had gone to warm up some pasta. My hands began to hurt a little so I relaxed them, thinking about how Randell had suggested maintaining a light grip on the handlebars. (I was doing the opposite.) With a relaxed grip and feeling more stable every minute, I finally worked up the confidence to look at my front wheel. I promptly swerved dramatically, the parabolic shape of the rollers being the only thing that saved me from sliding off. I decided I would save looking around for my next ride (baby steps). This first session was all about acquiring balance and stability.

Connecting the rollers with Zwift

The second time I used the rollers I was alone but confident. Setting up, Zwift synched seamlessly with the Elite Nero rollers. Right before I clipped in (with my big girl bike shoes) I realized I didn’t have anything to listen to. I lined up a few day’s backlog of the Daily and hopped on my bike.

Getting on the rollers for a second time definitely felt more natural. I stabilized quickly and fell into a steady pedalling pattern. The rollers are surprisingly quiet. Listening to a podcast from my phone, I was able to hear the monotone NYT voices very clearly over the sound of the bike. As I biked around Zwift in New York, I felt that my relative effort was reflected realistically in the watts displayed on my screen. I started to go a little faster and, as I turned a corner, suddenly the resistance of the rollers increased. I was a bit startled but straightened out quickly and realized it was a gradient change in Zwift. Shifting down, I climbed the small hill and the resistance returned to normal.

The rollers have a slight forward-backward movement, referred to by Elite as a floating system. The combination of the floating system, the balance required to stabilize myself and the gradient/resistance changes made Zwift feel more realistic than ever. In busy segments, I found myself leaning to the side to try and get around other cyclists. I had to stop myself from trying to corner properly. (I wish I were making this up. It was one of the times I came close to falling off the rollers.) As I rode, I grew more confident with moving around on the bike. I posted up very slightly to re-adjust a few times. (The floating system was a huge help.) I would wipe my face off here and there. I still hadn’t mastered the water-bottle grab, but I spent a thirsty hour doodling around Zwift with a few short efforts on the hills.

Trying a workout in erg mode

With the confidence of my second rollers attempt under my belt, I fired up TrainerRoad and hopped on my bike to do a sweet-spot workout. I wanted to try erg mode on the rollers and, as the hills in Zwift hadn’t been that bad, and I didn’t foresee the five intervals of ‘Geiger +2’ being particularly difficult. The warm-up was fine, but once I hit the first 12-minute interval, I realized I had made a mistake. My stability was ok, but the slowed rate of the rollers required a higher level of skill to maintain balance. I lasted exactly 36 minutes and 51 seconds of the hour-long workout before I gave up, surprisingly drained from concentrating on staying stable while maintaining power.

I sought redemption, so I chose a similar sweet-spot workout on TrainerRoad. I loaded myself back onto the rollers. This time I didn’t use erg mode, I just tried to hit the power targets myself. I found this setting much easier and the hour flew by. Cadence and power are measured by the Elite Nero rollers themselves, so you don’t need any extra sensors. Focusing on the power and cadence data (I was pedalling around 85-90 r.p.m. during the six intervals), I stayed concentrated on the workout and my mind didn’t drift as easily as it would on a trainer.

I went into this experience extremely apprehensive. By the end, I was really enjoying the rollers, in particular the interactive feel you get from using them in Zwift. After being on them for only a week, I noticed my pedalling on outside rides was steadier with a more consistent cadence. Small muscles in my legs that hadn’t gotten much use during the past few months on the trainer were starting to feel strong again. I found that the rollers force you to stabilize yourself, and the diversified movements you make pedalling on the Elite Nero reflect the experience of riding on the road more accurately than a standard trainer. I’ve continued to use the rollers and hope to integrate them into my winter training plan.

Andrew Randell told me about how he used to set up one of his first sets of rollers in his garage. He and his friends would get together and watch an old VHS of the Tour de France. The sound of the rollers would be deafening but the experience of inspired collective suffering was worthwhile. As I clipped in and quietly started rolling along in Zwift, waiting to join a meetup with a few friends, I reflected on how similar yet different the Elite Nero rollers are to those of the past. They’re rollers for the digital age, and I was happy I had conquered my fear of them.