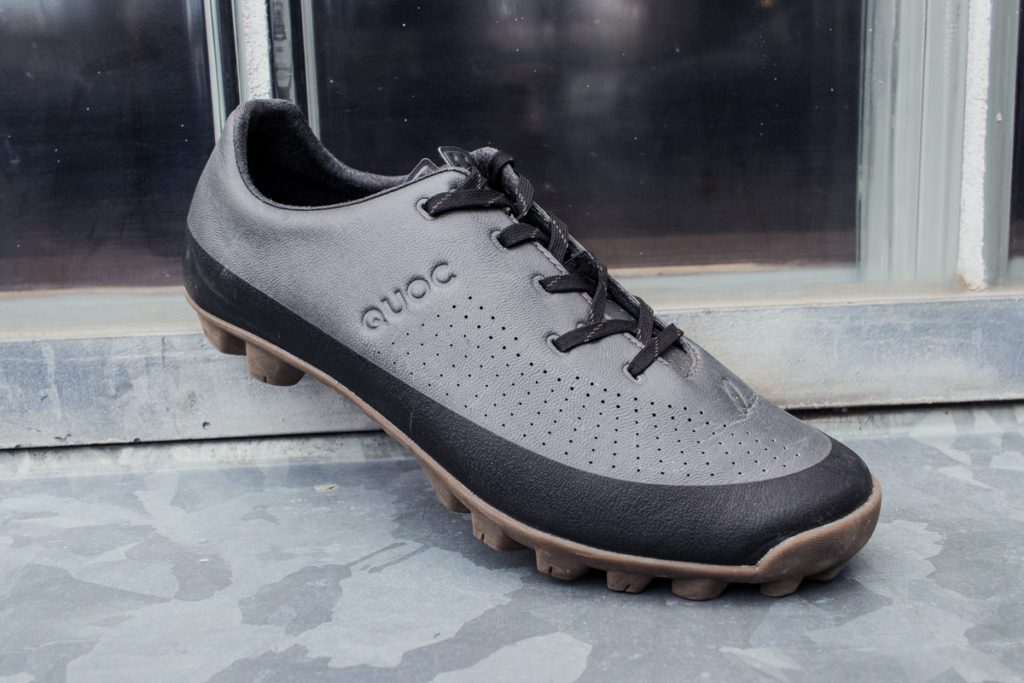 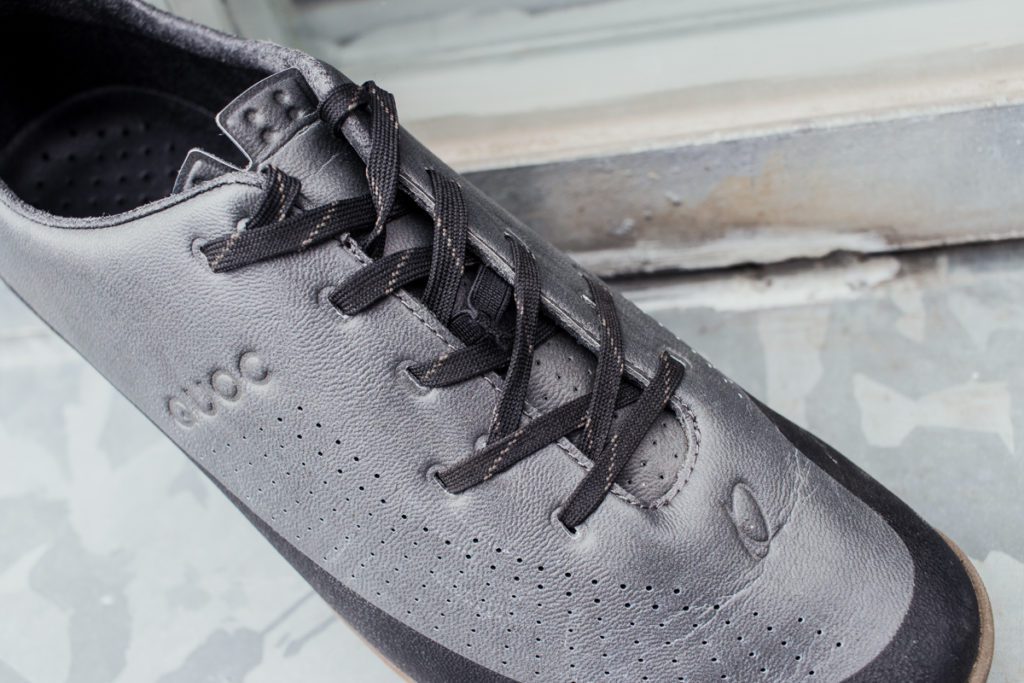 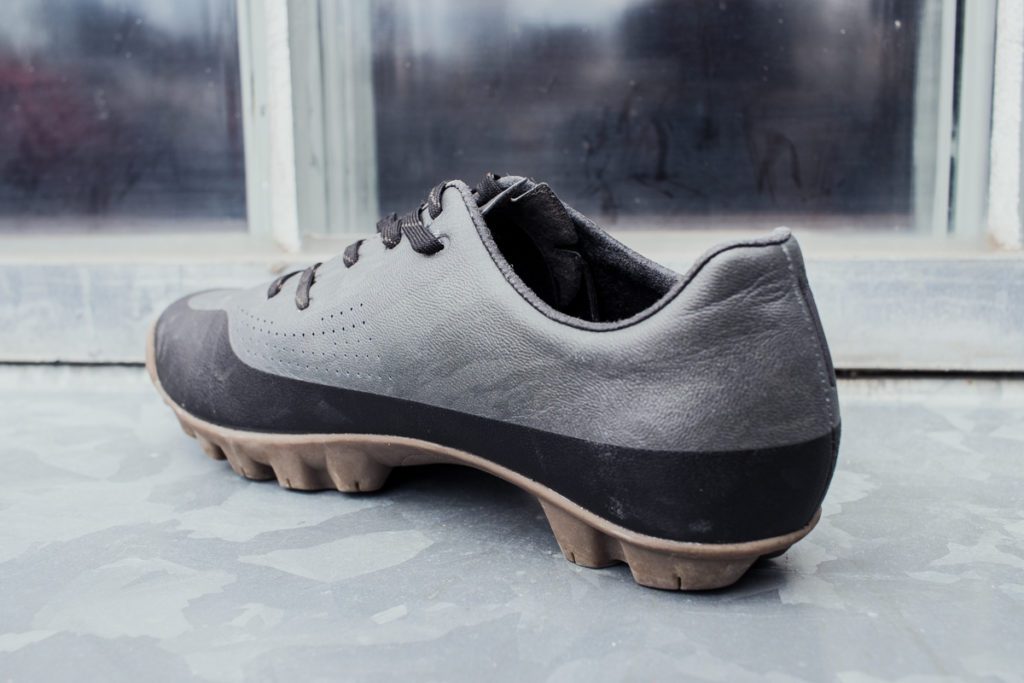 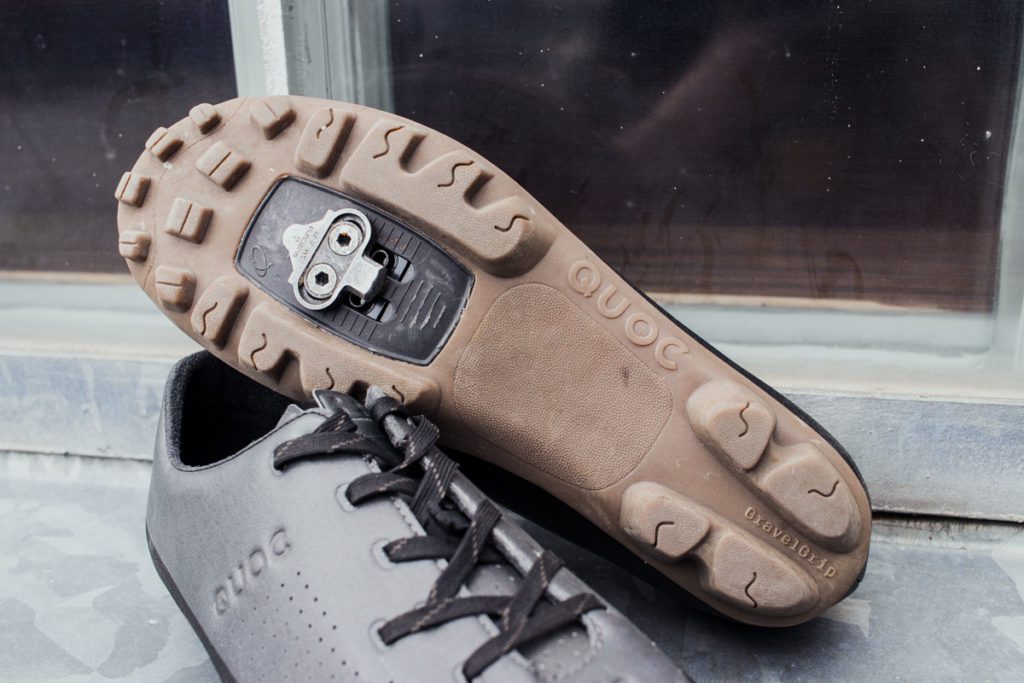 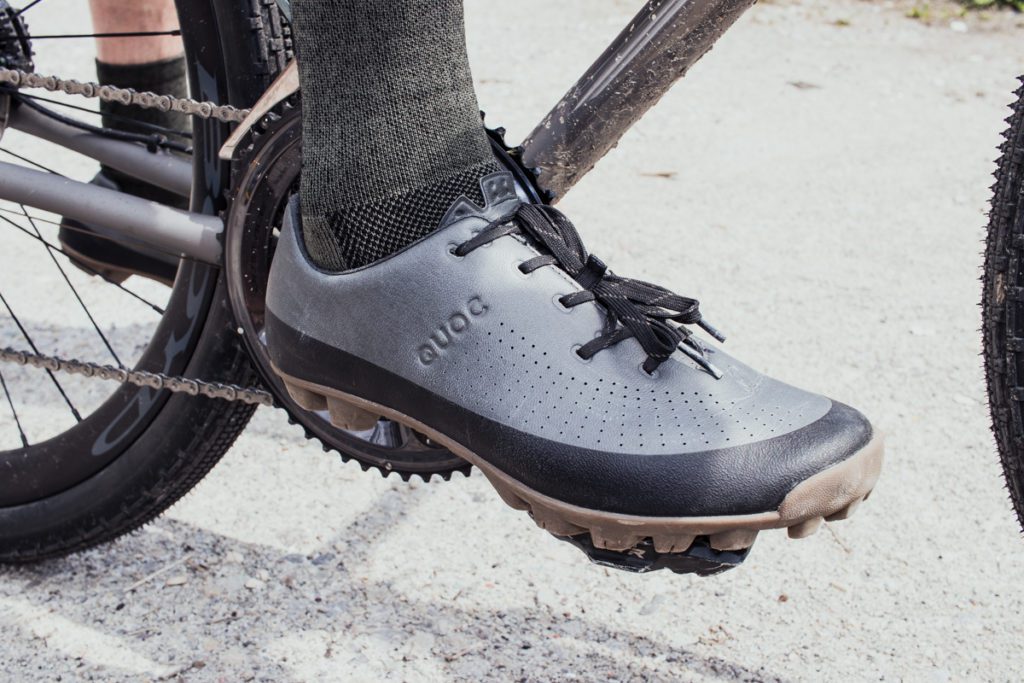 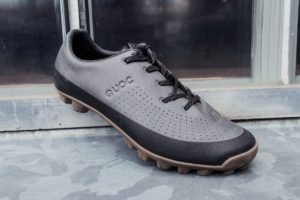 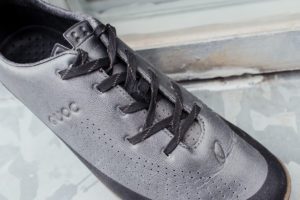 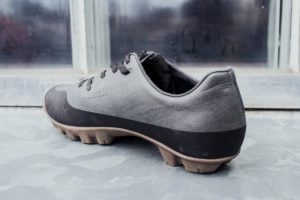 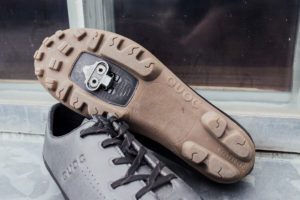 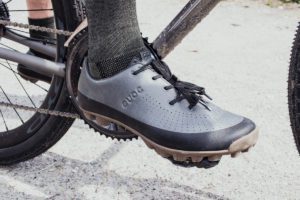 I didn’t want to wear the Quoc Gran Tourer shoes on the types of rides they were made for. The company released the shoes for gravel and bikepacking early this year. My pair looked good right out of the box. The colour is called black camo, which the company says “blends Vietnamese tiger-print camo with topographical maps of U.K. terrain.” The tiger print is quite subtle, most visible on the uppers, just beneath the ankles. As for the U.K. terrain, a sharper eye than mine might be able to pick it out.

I didn’t want to take these shoes out on Canadian landscapes because I thought the shoes would get trashed. I dodged rainy days this past spring, of which there were a lot. But what kind of test would they receive if I babied them? So, on a weekend in late May, I hauled them out on logging roads and ATV trails. Each Gran Tour shoe has a bonded upper that Quoc calls “no sew.” Between the synthetic microfibre upper and the rubber outsole, there’s a black rubber border. Not only is the border a stylish flourish, but it keeps the shoe waterproof right to its top edge. The upper isn’t too shabby at keeping out the elements. The tongue is gusseted—attached at its sides—to help prevent water and dirt from working their way in. The midsole is a carbon composite, which you can see by taking out the insole. With Shimano shoes, you sometimes add extra weather protection by placing a sticker on the midsole above the SPD cleat bolt holes. The Quoc Gran Tourer shoes have a bonded patch to make sure that area is waterproof from below.

Out on the logging roads and trails, the waterproofing worked well. The shoe managed right-size puddles—that is, ones that weren’t deeper than the waterproof border. The upper sheds sand and dirt very well. Everything still looked good when I took wore the shoes to the office the following Monday.

Much to the annoyance of my co-workers, especially those who work on other, non-cycling magazines, I usually wear shoes with SPDs around the office. Even the most walkable clipless shoes are a bit “clompy.” (Oh, those editors at Canadian Running, they have such quiet shoes!) Probably the clompiest shoes I’ve taken across our hardwood floors are the Giro Republic LX R. They look great but are loud. The proprietary rubber outsole of the Quoc Gran Tourers is called GravelGrip. Out on the dirt, it lives up to its name. Around the office, it does a fairly good job of minimizing the clomp. I’d say the Gran Tourer shoes are about as loud as my old lace-up Shimano XC5 on hardwood.

Actually, the old XC5 make for a good comparison with the Gran Tourer. Both are versaille shoes designed primarily for gravel, but are also at home in the city and even on some bikepacking routes. The midsole of the Gran Tour feels stiffer, offering better power transfer than the XC5. The Quoc shoes have better waterproofing, too. Where the XC5 trump the Gran Tourer is in the break-in period. It might be my feet, but they always seem to take to Shimano shoes quickly. The Quoc were great straight away on my soles, but it took some time before things were dialed against the bridges of my feet.

With the shoes worked in, they continue to see a lot of action, on gravel and on commutes. In all those situations, the Quoc Gran Tourer shoes cleaned up really nice.