When paired with the right Garmin head unit, the company’s Varia UT800 smart headlight ($200) is eerily accurate when it adjusts its beam according to your speed, and the light conditions and type of ride. Sure, it’s not technically that eerie as it is sensors and algorithms working to choose between high (800 lumens), medium (400 lumens), low (200 lumens), night flash (100 to 300 lumens) and day flash (more than 700 lumens), but it can still feel as if you have a light from the future. At the back, Garmin has a device that is even more high-tech.

The Varia RTL510 ($400 for tail light and radar display unit bundle) not only sends a red light rearward, but also radar waves. Your compatible head unit or radar unit receives these waves, and then tells you if the coast is clear (green light), if a vehicle (or multiple vehicles) is approaching (yellow light) or if something is coming up quickly (red light), so proceed with caution.

The Fabric Lumasense front and rear lights ($40, front; $47, rear) are a stylish pair. Their good looks also come with some sharp functions. The rear light has an accelerometer, so when you hit the brakes, the chip-on-board LEDs glow more brightly – a brake light for your bike. The front light, like the rear, produces 30 lumens and is easy to attach to your frame. 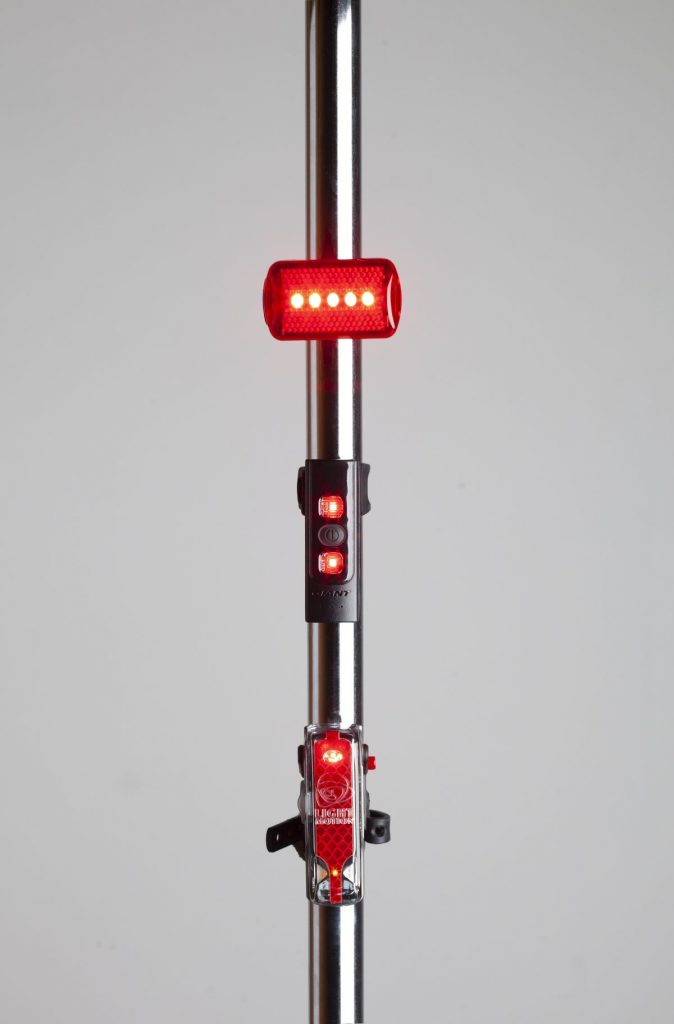 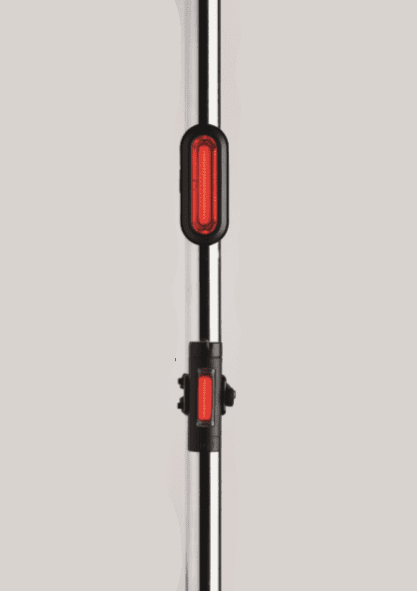 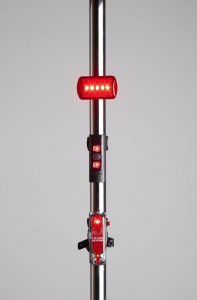 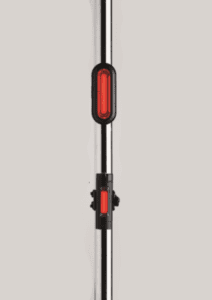 The compact Light and Motion Imjin 800 ($239) can strap to your bars or helmet for illuminating the trail ahead of you. It’s a versatile and powerful light with four modes (800, 400 and 200 lumens, the latter comes as a steady beam or pulse). If the Imjin gets wet, it will be fine as it’s built to withstand getting submerged under 1 m of water. If your ride takes this light that deep underwater, well, that’s pretty extreme. The Vis 180 ($100) can also take a dunking. This rear light sends 70 lumens of red light out the back and flashes amber light to the sides to increase your visibility. With an extra attachment, you can set this light up on an aero seatpost or a rear rack.

The Kryptonite Alley F-800 ($110) is now the brightest light in company’s lineup. But brand manager Daryl Slater says that setting this light to its brightest mode isn’t always the right way to take advantage of the high-powered Alley. “Don’t use 800 lumens riding around a major city, if you don’t need to,” he says. Instead, he advises that you think about how to maximize battery life. For example, 800 lumens will run the battery down in 1.5 hours. You have 24 hours of life with eco mode. A good balance seems to be the 400-lumens setting, which can burn for four hours. On your seatpost, the Avenue R-75 ($62) features chip-on-board (COB) leds, which offer a higher lumen-per-watt ratio than other types of leds. The front and rear lights also come as a set ($145).

The Giant Numen+ Tag headlight and tail light ($55/light) can attach easily to your bike via elastic straps. You can also secure them with their magnetic clip mounts, which work quite well with the rear light and your jersey pockets. Each Numen+ Tag puts out a maximum of 40 lumens. 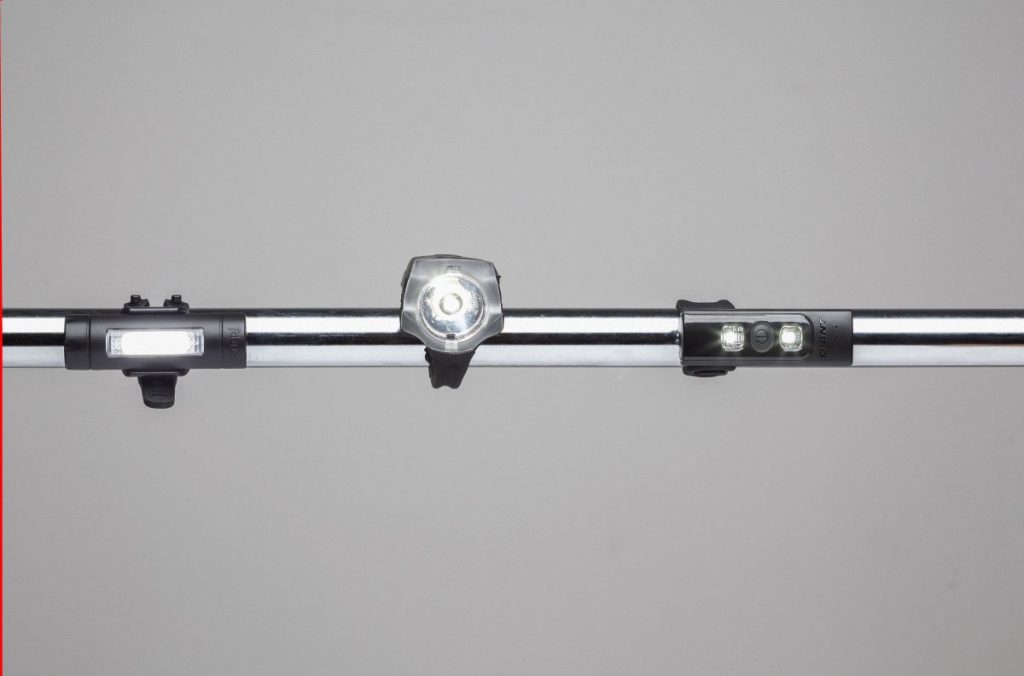 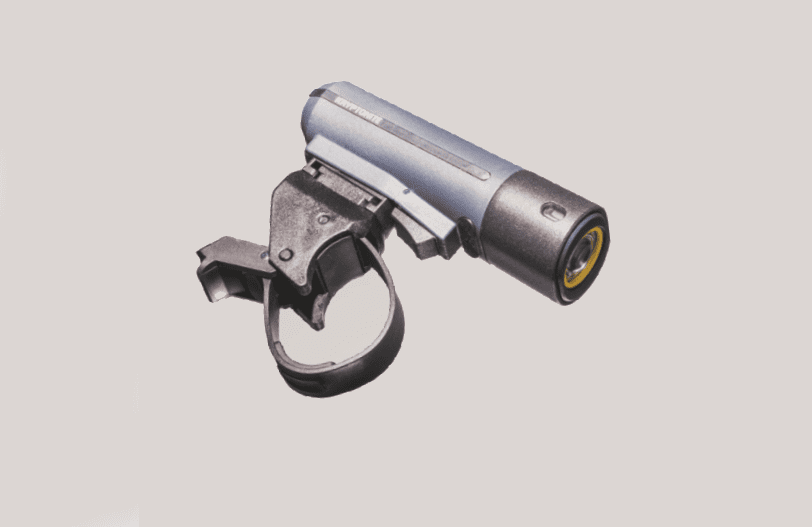 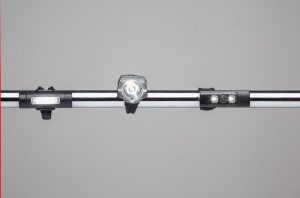 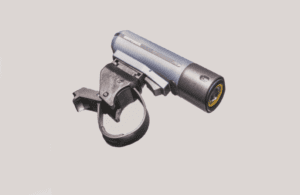 The MEC Dazzle K ($8) is a classic tail light that gets the job done: keeps you visible out on the road. On your commutes, the five leds blink or hold steady, casting their light roughly 750 m behind you. The MEC Quattro ($24) is slightly more “new school” than the Dazzle with its USB cable for topping up the battery. (The Dazzle comes with two AAA batteries.) Still, the Quattro and its 90 lumens that run for five hours on flash mode and four on steady are the perfect complement for the old school tail light.