When Cannondale unveiled the SuperSix back in 2008, they were aiming to deliver a top end race bike that was light and stiff. Cannondale know those characteristics are still of top importance to WorldTour racers but recognize that many cyclists are doing a wide variety of riding. The new SuperSix EVO looks so different than previous iterations because it balances the need for speed with increased versatility. 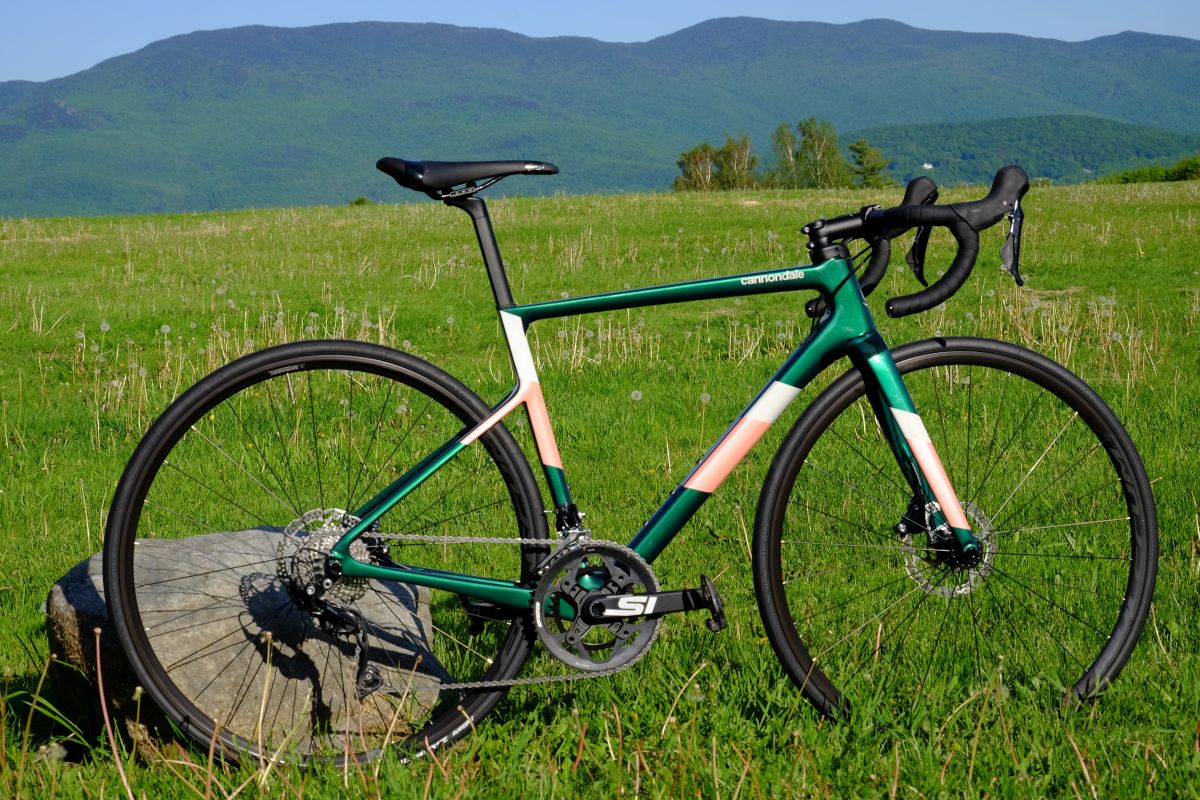 In Stowe, Vermont, Cannondale unveiled an unmistakably updated SuperSix designed for the increasingly adventurous modern cyclist. At the same time, Cannondale has added performance features that arguably give it a greater range of utilities than any other bike in Cannondale’s line-up. The most noticeable updates are the dropped seat stays, truncated airfoil tube shapes, a sloping top tube and lots of tire clearance. While it’s also light, stiff and more aero, the more intriguing design changes make it perfect for riders looking for more range from their road bike.

First launched in 2008, the SuperSix received substantial updates in 2011 and 2015 which added better ride quality and updated handling that made it more fun and confident, especially on descents. The latest is the biggest yet. The new SuperSix EVO looks nothing like past iterations. Aesthetically it moves away from the classic look of previous models to a more modern industrial design with sculpted rather than rounded tubing. 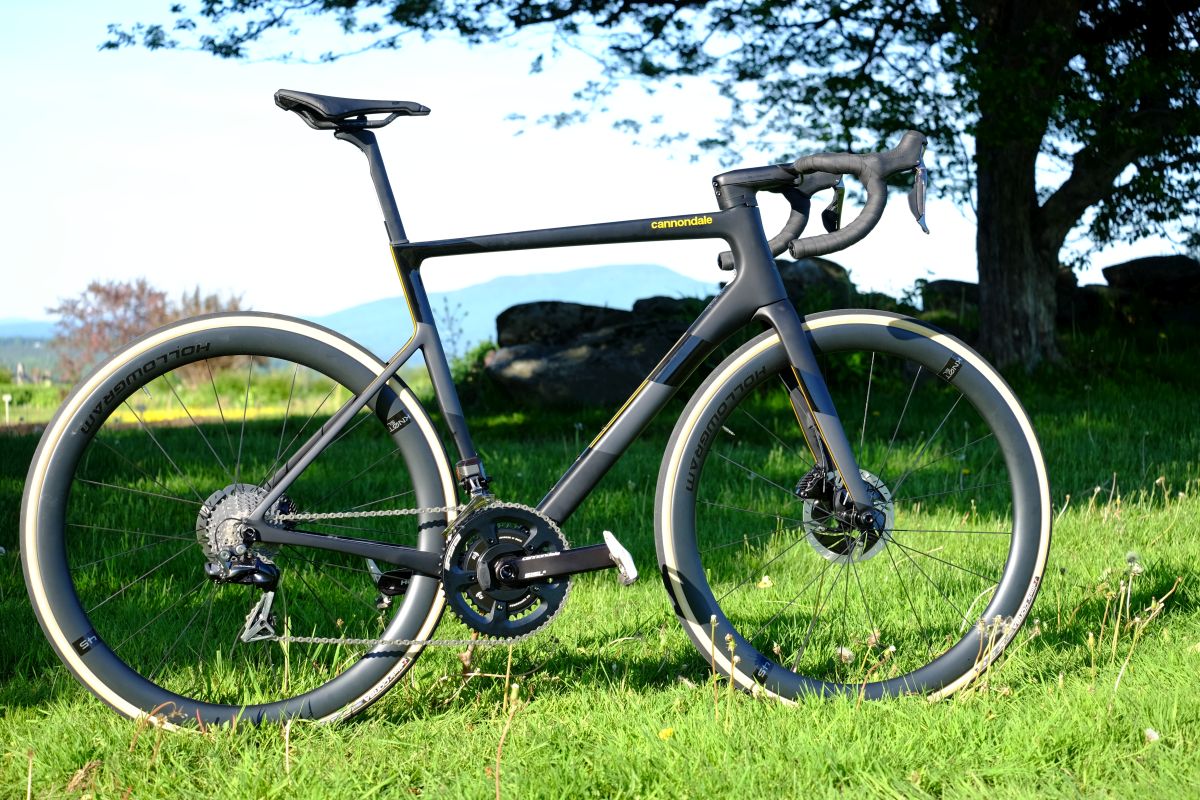 While Cannondale officially says the new SuperSix EVO has clearance for 30 mm tires with 6 mm of clearance around the tire, whispers were some people had mounted 33 mm tires on their test rigs with space to spare. While Michael Woods won’t be mounting 33 mm tires on his bike when he line’s up on his new SuperSix at the Tour de France next week, you might like the option to do that if you are doing a big gravel ride or just want to experiment with different tires. Wider tires can, after all, smoothen out rough roads, provide added traction and confidence on your rides.

Another update is to the geometry. The new SuperSix has a taller stack and a shorter reach. The dropped seatstays and new KNØT seatpost increases compliance by 18 per cent according to Cannondale. That all adds up to 18 per cent more compliance.

The SuperSix spends some time in the wind tunnel

After the release of the SystemSix road bike that was almost singularly focused on aerodynamics, Cannondale borrowed some of that approach when redesigning the SuperSix. While they wanted to keep the frames lightweight, they’ve introduced numerous design changes that help it cut through the air more efficiently. 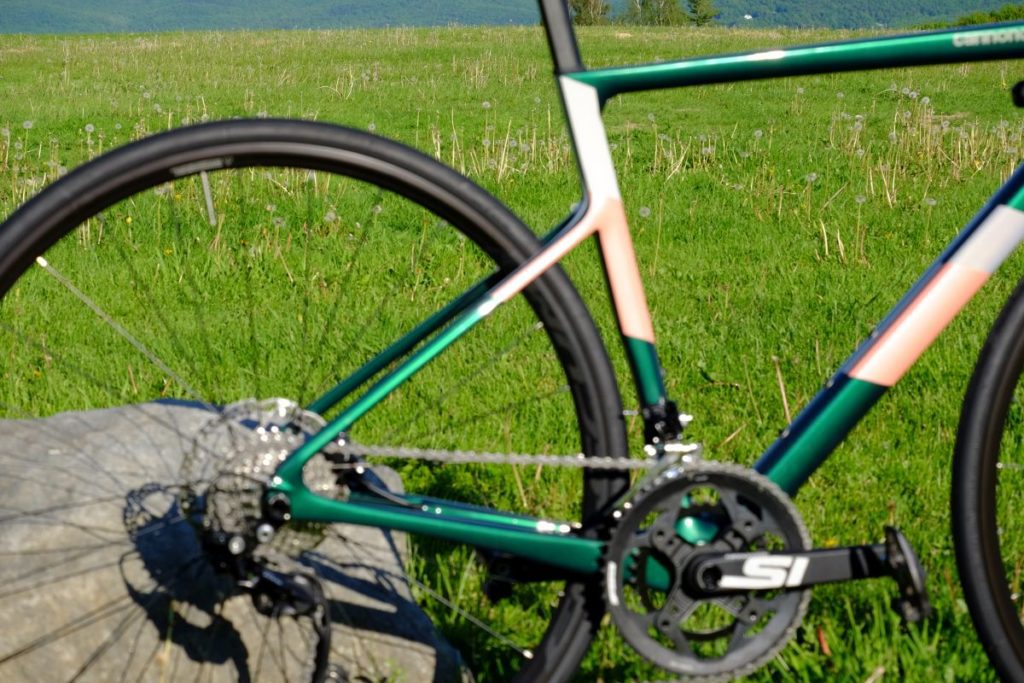 Dropped seatstays for aerodynamics and comfort. 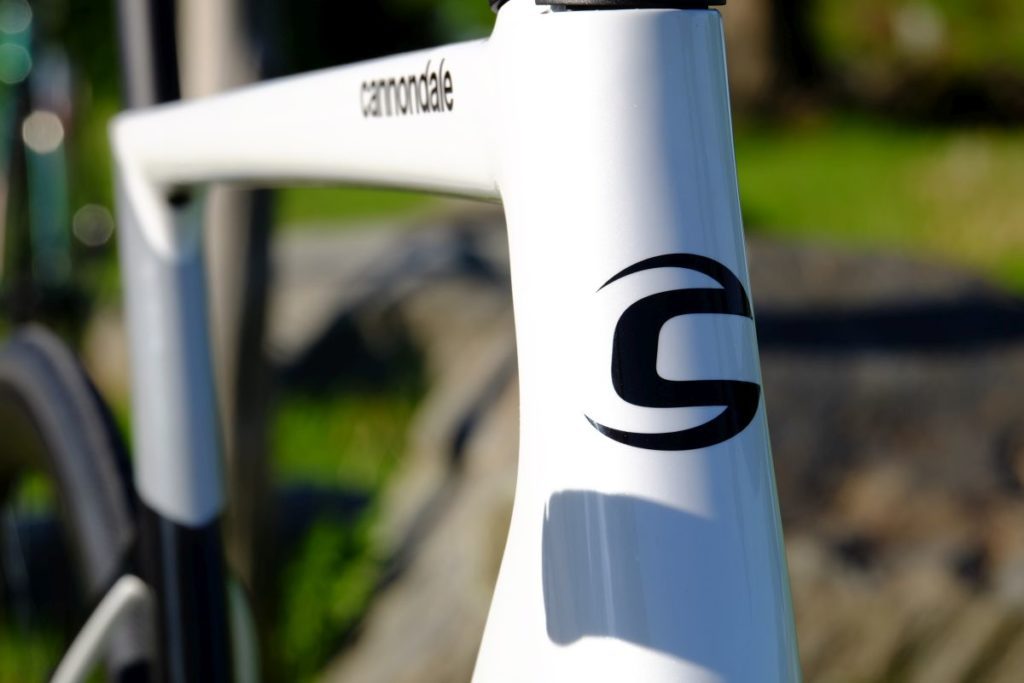 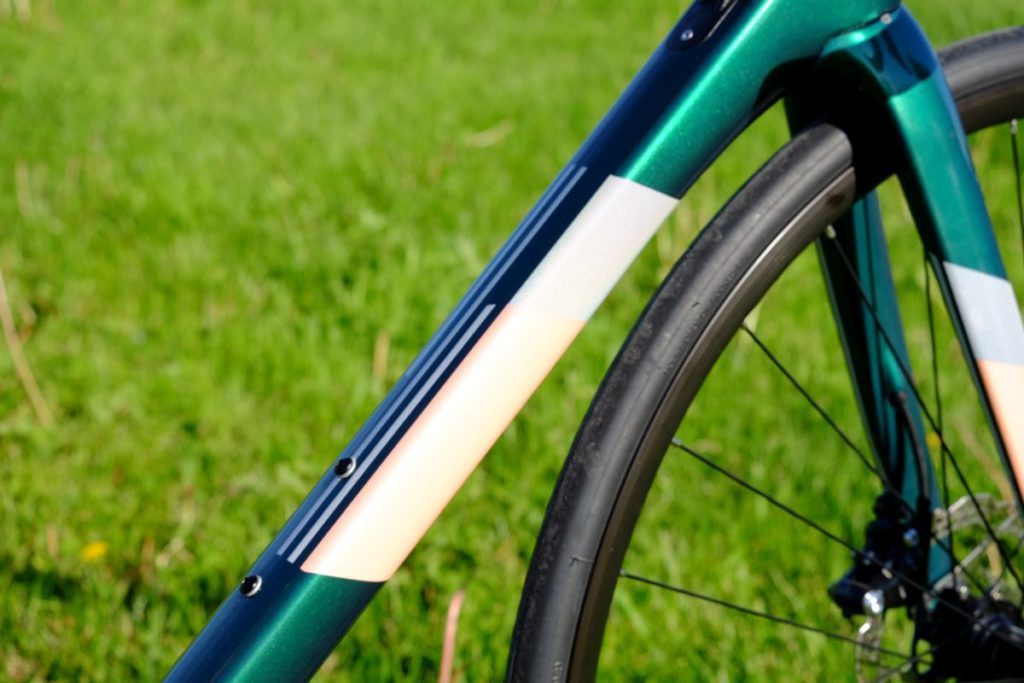 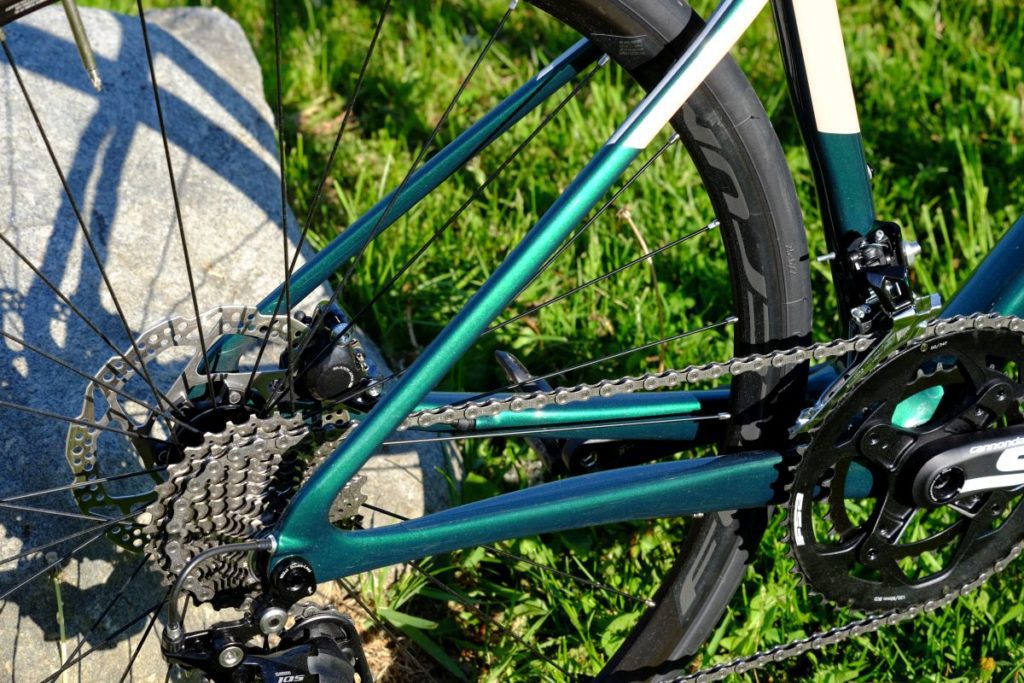 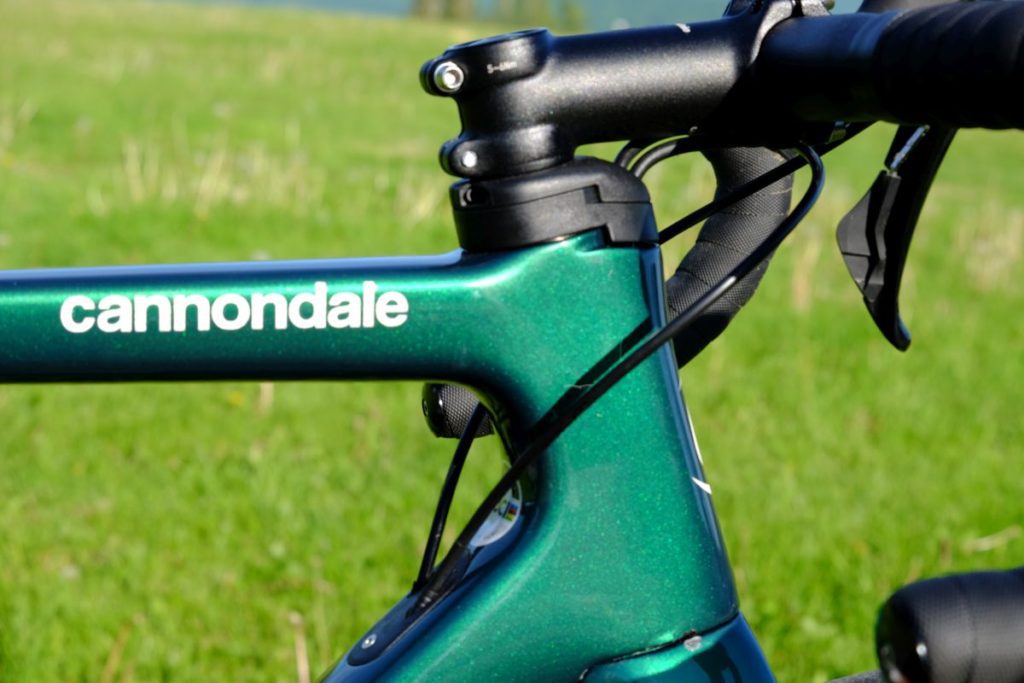 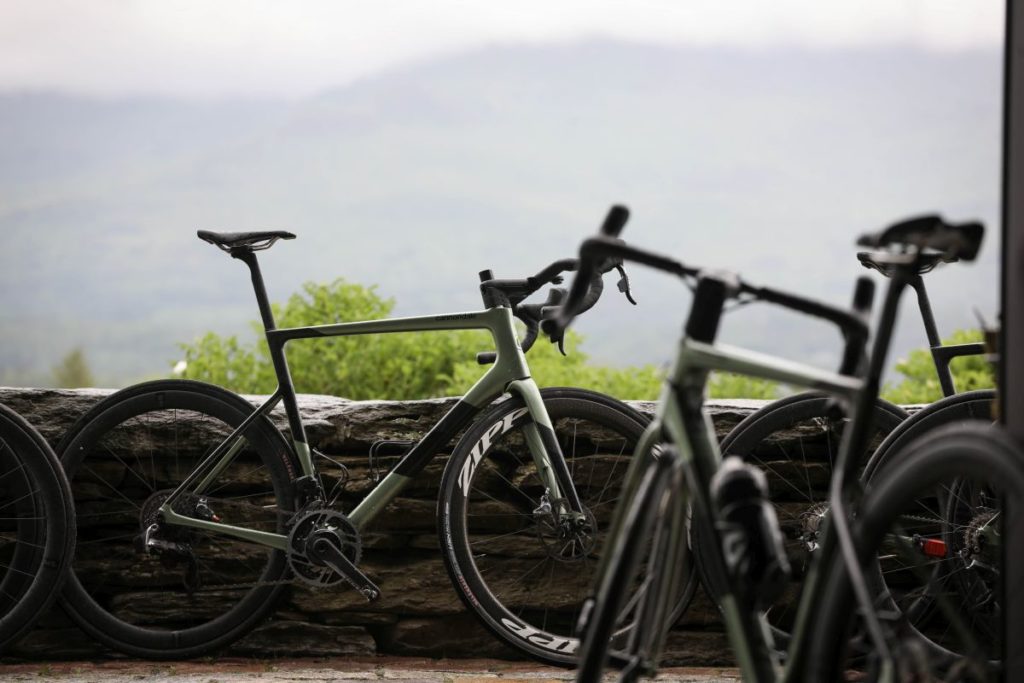 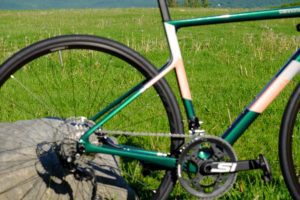 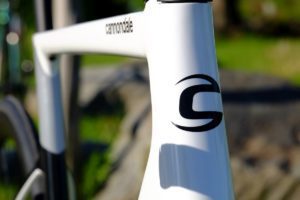 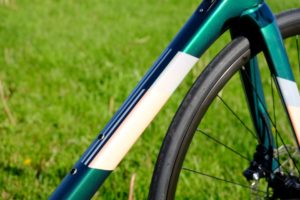 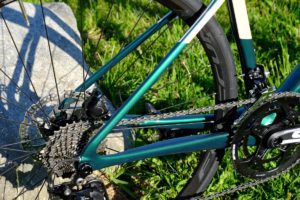 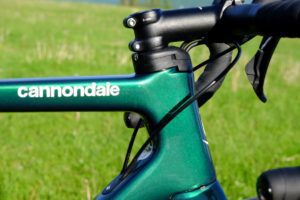 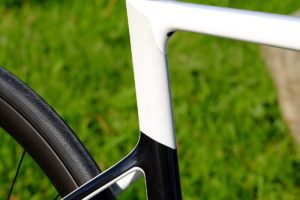 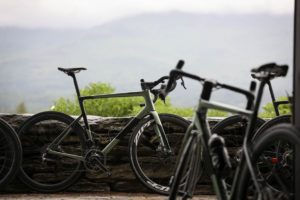 “Aerodynamic efficiency has a huge affect on speed and performance in cycling, so reducing drag on the new SuperSix EVO was a priority,” said Cannondale design engineer Nathan Barry . “But it was equally important that the new bike retain the lightweight, responsiveness and composed ride that made the previous iterations so successful.”

Adding airfoil tubing often comes with added weight but Cannondale solved this but truncating the shape while maintaining the frames lightweight and stiffness. The fork slots into the downtube while the head tube has been redesigned to allow for increasingly hidden brake, Di2 and mechanical shift cables with the new KNØT stem and SAVE handlebar.

Cannondale is quite proud of what they have been able to deliver aerodynamically with the SuperSix. Riding at high speed (48 km/h), Cannondale says the new design will save a rider a substantial 30 watts compared to the previous model. Their internal testing also showed that it topped the competition in the lightweight road bike category.

The SuperSix EVO is available in both rim and disc models as well as a HiMod version. The range-topping SuperSix HiMod disc with Shimano Dura-Ace Di2 and the new HollowGram 45 Wheels comes with a $14,000 price tag while with Ultegra Di2 it’s $9,650. There’s both a men’s and women’s version of the SuperSix disc with mechanical Ultegra which is $4,700. The men’s and women’s model with Shimano 105 disc is a very accessible $3,600 while the rim model is a very accessible $2,700. 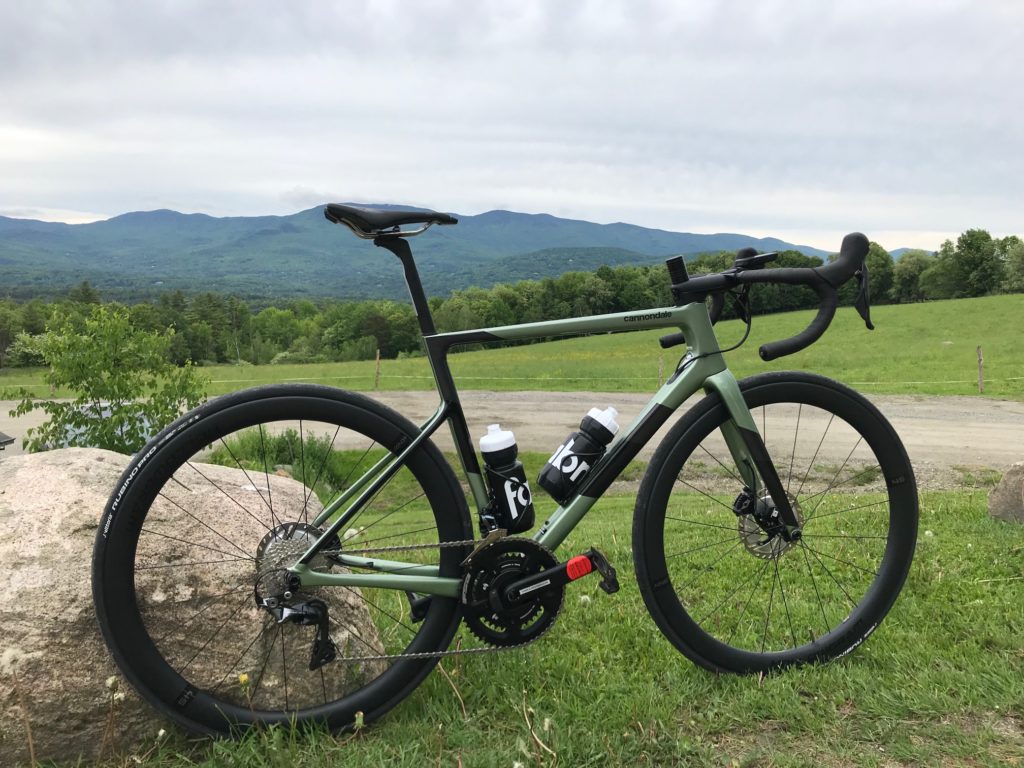 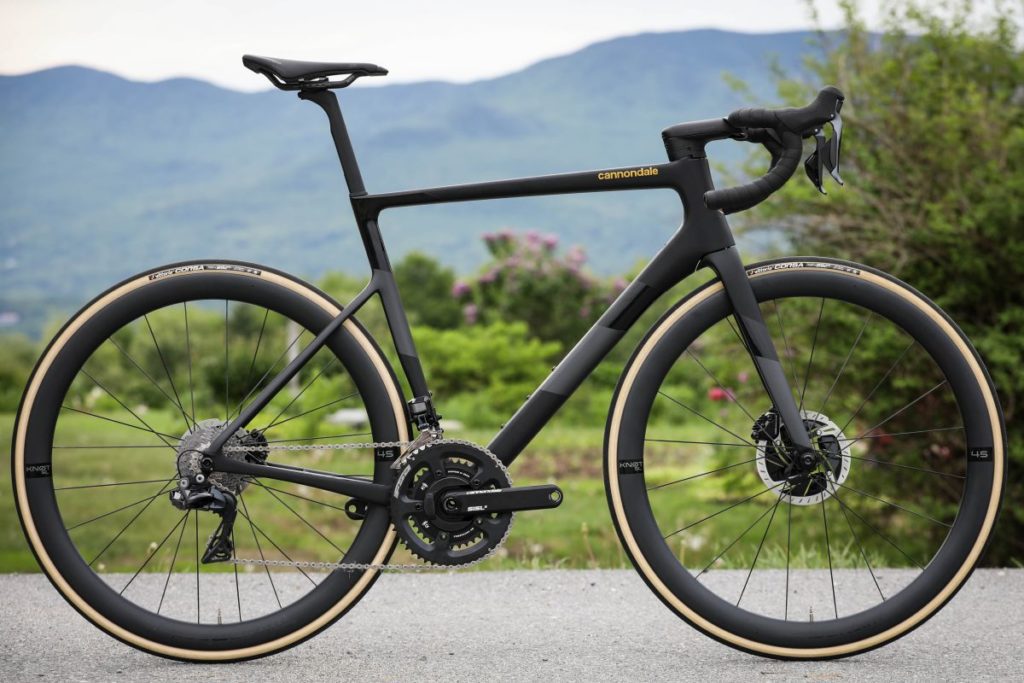 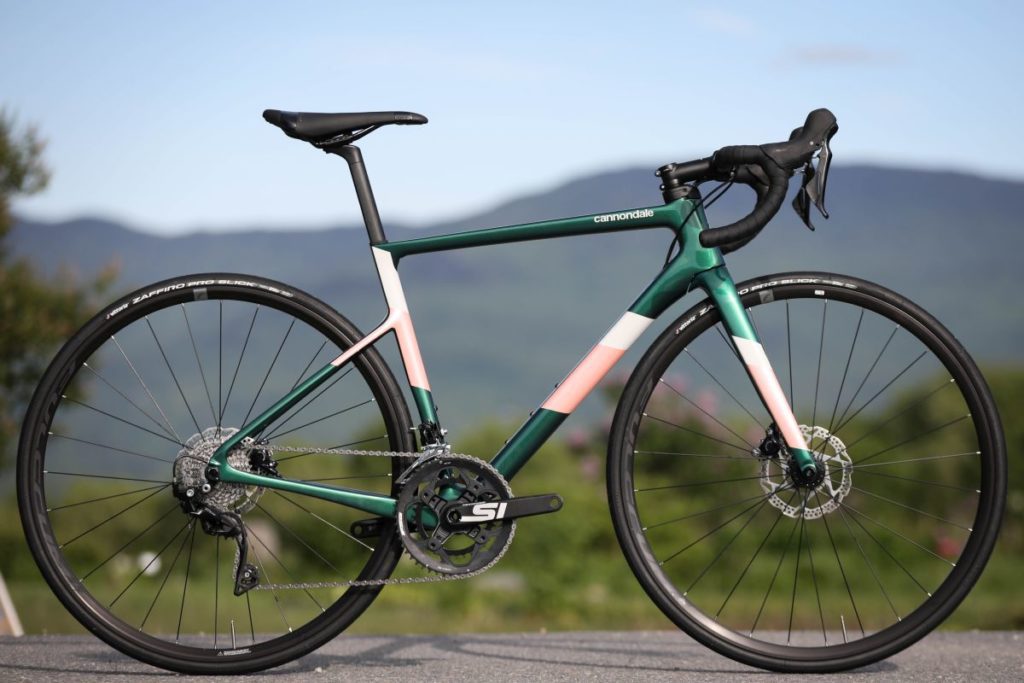 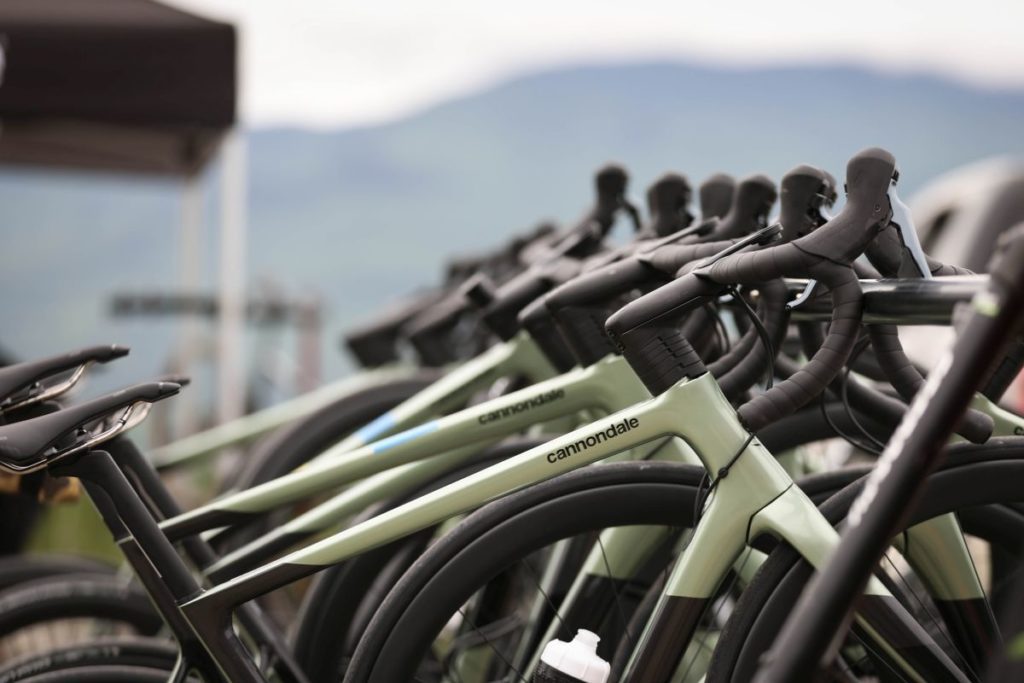 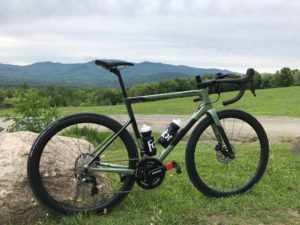 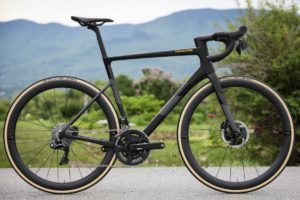 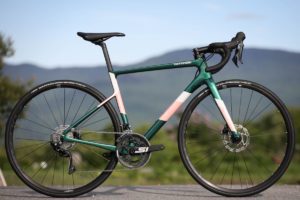 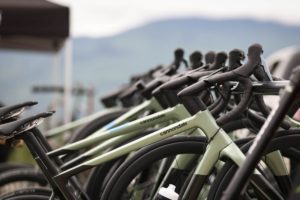 The higher-end models come with a ready-to-activate with a fee Power2Max power meter and the new Cannondale wheel sensor developed with Garmin that provides accurate speed, route and distance information. With the Cannondale App, you can get insight into your bike along with maintenance reminders and how to videos for the home bike mechanic.

The rolling hills of Vermont are not just picturesque offering splendid riding but were a good first test of the SuperSix. Our ride began with a ripping descent where the bike felt sure and confident beneath me despite having not had a chance to get accustomed to its handling. Carving those first few corners built up the anticipation to when I could build some speed under my own power. A photo opp was the first opportunity I had to roll off the front immediately getting a jump of speed the bike helped me maintain.

While Vermont’s roads are beautiful, they aren’t all smooth. On one a stretch, King got to the front to push the pace so we could make it to the lunch spot before the rain started. Holding the wheel I went through a few cracks and holes that the bike absorbed far better than many other bikes with aerodynamic properties would.

The ride stuck to pavement but at every turn, we encountered gravel ones. For more confidence on uneven rough surfaces, it’s really nice having the option to throw on some wider rubber. There was certainly plenty of room around the 30 mm tires former pro and Vermont local Ted King was running on his bike. 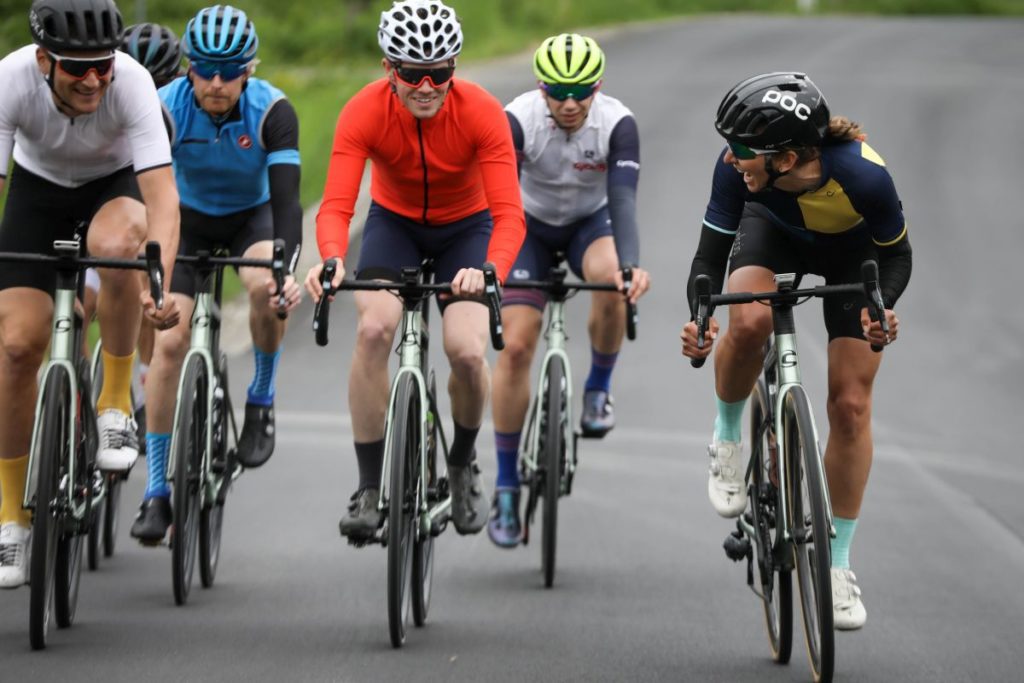 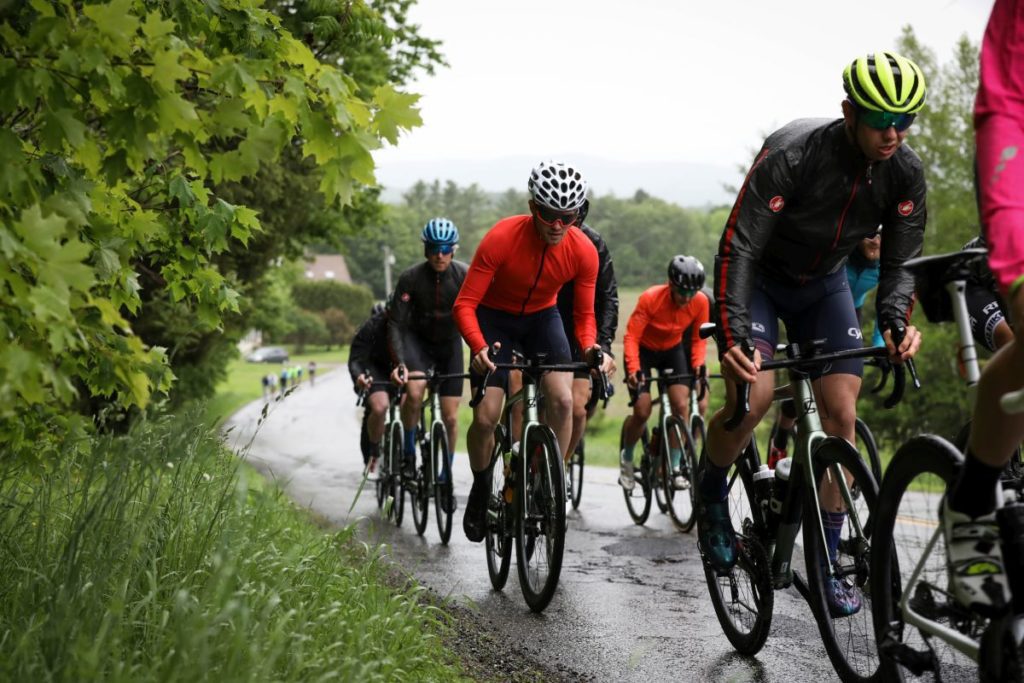 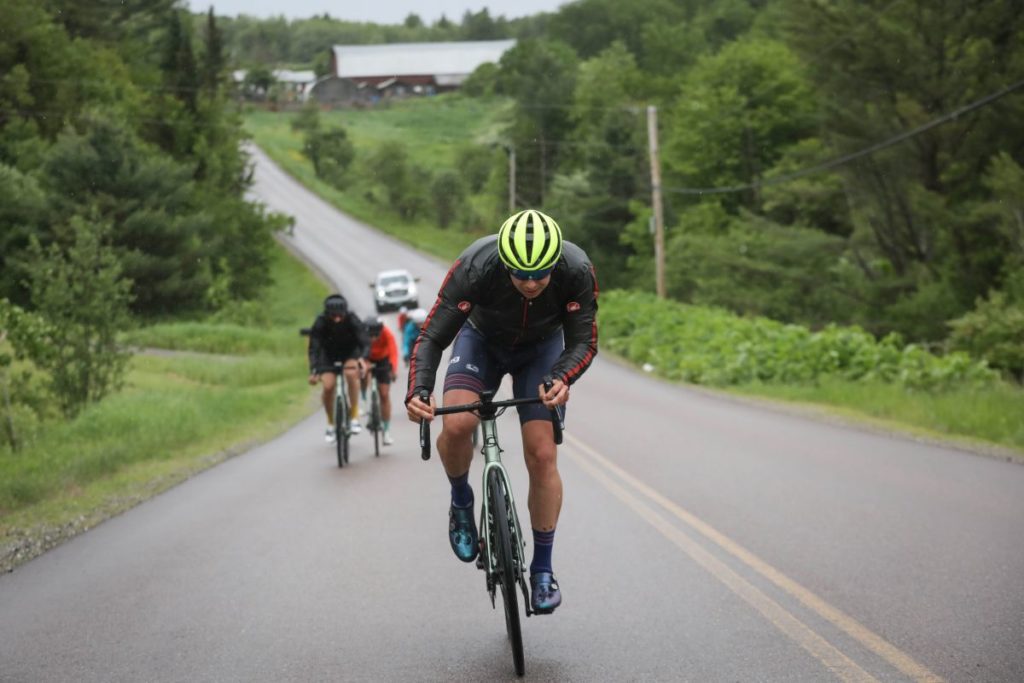 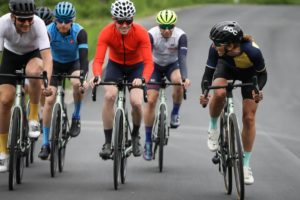 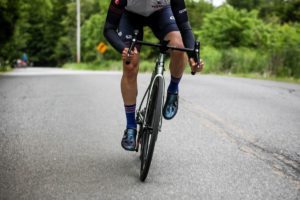 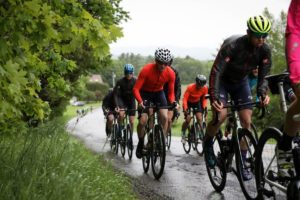 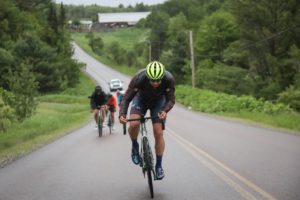 We got to do some climbing too and Vermont’s got some very grippy little climbs. Delivering power through the pedals comes with an immediate response that left me with a grin even when the rain started falling.

While I won’t be lining up for a road race anytime soon and certainly don’t require a bike as highly specced as what the pros race, this is perhaps the most appealing top-end bike I have ridden. The appeal of being able to adventure further on a bike that will also help me drop my riding friends on the hammerfest is an irresistible combination. I look forward to an opportunity in the future to further push the limits of what the new SuperSix EVO can do.