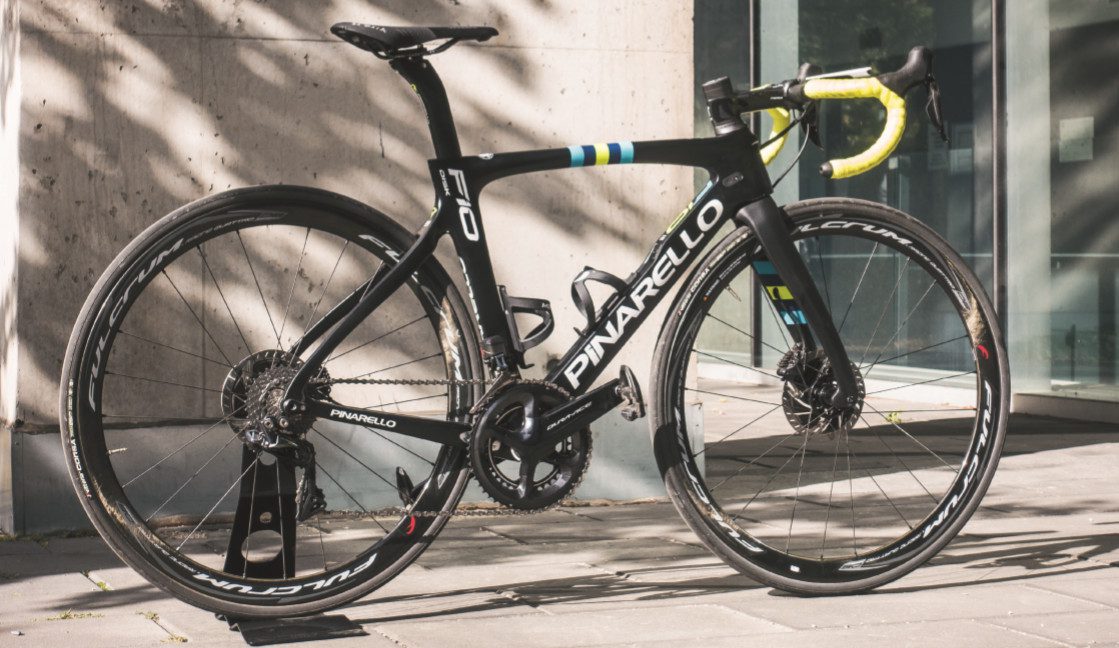 Having long been a fan of the handling of Pinarello bikes, from the Dogma 65.1 through to the F8, I was eager to try the F10 Disk. Disc brakes promise greater control and more safety at higher speeds on the road. But, having ridden more than a few disc-equipped road bikes, I knew that rim- and disc-equipped models from the same brand don’t always feels the same. A company needs to address additional and different forces on a frame with disc brakes compared with its rim-brake equivalent. Sometimes things are lost in translation. I wondered, does the F10 Disk feel like its siblings? Still feel like a Pinarello.

The F10 Disk obliged from the first ride, retaining the signature Pinarello handling: a mixture of sharp, instantaneous responses that manages to stay just on the right side of stability. On the F10 Disk, I relished every time the road curved, enjoying the intuitive handling that comes from subtle hip shifts to drop the bike into line. Yet the bike never crosses the line into twitchiness; the F10 Disk does not punish you for momentary lapses in attention.

The addition of disc brakes only magnified the experience. The ability to pull the brakes precisely at the last possible moment, while maintaining control, and to carry maximum speed through turns is the kind of fun that never gets old. Roads that I had ridden hundreds of times suddenly seemed new again as I found slightly different lines to corner better.

Pinarellos are sold as framesets in Canada, but my test bike was outfitted with the latest Shimano Dura-Ace 9170 Di2 hydraulic disc groupset. It’s a setup that I recommend highly, if your budget allows, which, if you are considering this frame, is probably at least close. The power and modulation of Shimano’s flagship hydraulic disc brakes are clearly superior to their rim brake counterparts. It really is no longer possible to object to disc brakes on a performance basis. On grounds of esthetics or traditions, sure. But you’d be denying reality to argue that rotors don’t offer better performance.

The F10 Disk does seems to encourage a more seated style of climbing, churning gears in a Froomelike manner if you will, in contrast to other Pinarellos I’d ridden previously. I wasn’t any slower up any of my usual climbs, compared with my Strava times or my usual ride partners. The bike didn’t feel heavy as I rode, even though the disc version carries a very minor weight increase.

The F10 Disk doesn’t take advantage of the added space a disc configuration can allow for wider tires. The bike won’t take anything bigger than 25-mm tires, which you might consider a miss. Then again, the Pinarello F10 Disk is a pure road bike. It’s far too nice to take on gravel; it is probably just as well that bigger tires can’t be fitted.

In pairing the flagship frame with disc brakes, Pinarello has found a combination that complemented and enhanced the handling they are known for, creating a racer that is worthy of consideration for fans of the Italian marque.