Raynaud’s syndrome (a sensitivity to sudden change in temperature that often results in painful vasoconstriction or dilation), has driven me to ride on a trainer earlier than most other cyclists venture inside. I have tried so many gloves, heated, layered, and everything in between, in search of a solution, but to no avail. Naturally therefore, after being told Quanta vici products were designed to alleviate the symptoms of Raynaud’s and similar circulation problems, I was eager see if they lived up to their promises.

The gloves arrived in a large, well designed, presentation box and so it was clear that Quanta Vici aimed to impress from the get go. Once inside the box, the components were easy to fit and charge ready for the first ride. The batteries appeared quite heavy on first impression but having experienced the results thereafter, I now say they are well worth the extra weight. Perhaps this orientates the apparel towards training not racing but if it’s the difference between riding or not, as it is with me, then it’s better to turn up at the start line knowing you will finish the race than pinch on weight gains and DNF part way through. The wrist sections of the glove are slightly longer than most gloves to accommodate the batteries which are tucked inside a small pocket. Over the years, I have received a plethora of advise on how to keep the symptoms of Raynaud’s at bay and on one occasion, I was told that keeping your wrists warm has a positive effect on the fingers, in turn. With this in mind, the longer wrist covering adds to the functionality of the glove as a whole. Furthermore, the zip to the battery storage section is sealed to prevent the wind snapping through the glove. I think Quanta Vici could have further complimented the design with a draw-cord at the top to contain the heat generated inside, but perhaps the loose fit is a conscious decision to avoid the possibility of overheating, it’s difficult to say.

I set out in temperatures hovering around zero degrees Celsius and soon noticed the wind biting at my ears and chin even with a hat and buff in situ. My hands however, positioned out front on the handle bars and thus taking on a pretty forceful headwind, remained comfortable throughout. While Quanta vici haven’t highlighted the windproof aspect of the gloves in the specs, I would certainly suggest they are. On the contrary, their specs suggest they are water resistant and so provide some confidence for wetter conditions, although I wouldn’t attempt to tackle anything too heavy given the lightweight material the gloves are made from. 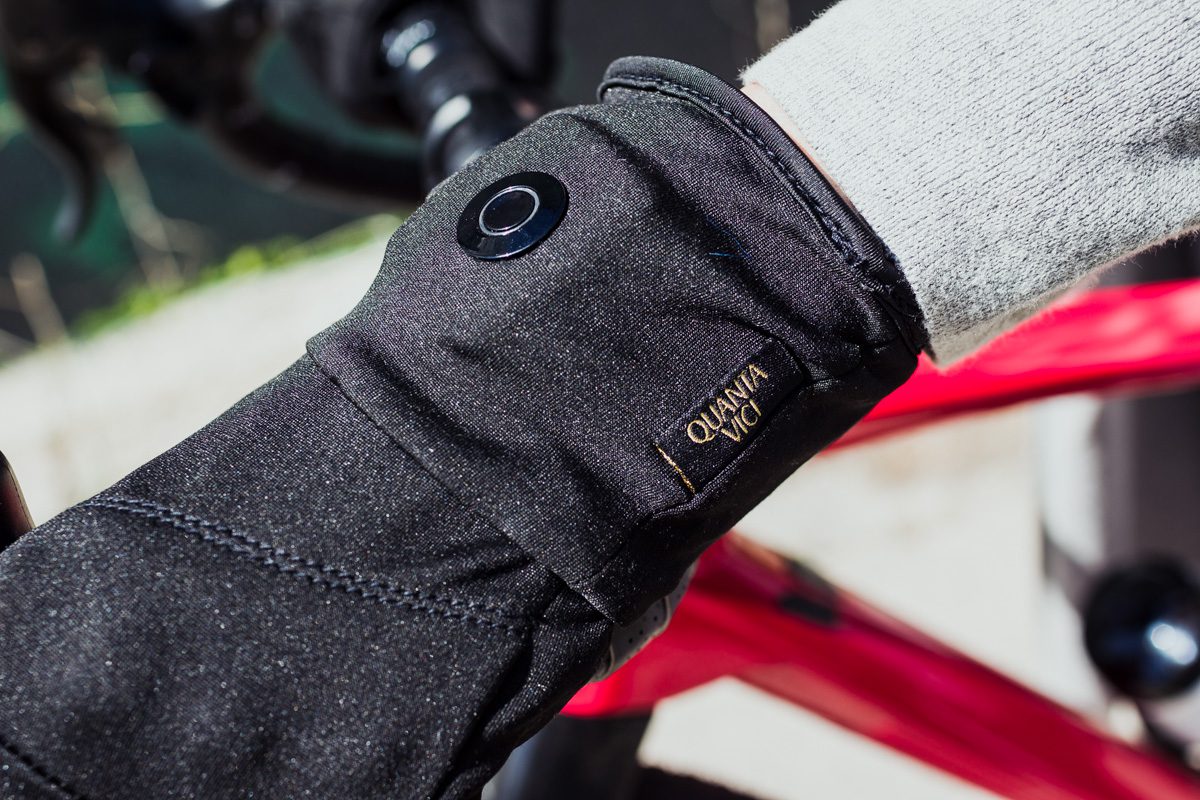 I can’t remember the last time I rode with one layer on my hands before the highs of summer, especially a glove so light. Quanta Vici suggests doubling-up layers as necessary and recommend pairing the gloves with a base layer as opposed to using a second glove over the top. I didn’t need to try this during the testing period as, albeit on the maximum setting, the gloves were warm enough on their own. I do wonder how doubling up would affect the heat distribution and overall warmth also.

On this note, it is not so much the warmth the gloves generate that separates them from other heated apparel, but the heat distribution and temperature regulation. The gloves continue to switch on and off as the temperature rises and falls to achieve a constant temperature within the selected setting (there are 3 to choose from). This is vital for people with Raynaud’s, as whacking the heat up in one spot and at close contact, as so many heated gloves do, can exacerbate the symptoms. Sat in the comfort of my own home, I tried the gloves on for the first time and I questioned whether the thumb received as much heat as the remaining digits, but during the ride, this didn’t prove to be an issue. In fact, now I wonder if this was intentional given the thumb is often tucked behind the back of the handlebars when riding and the fingers take most of the headwind. Quanta Vici have also incorporated a smart pad on the index finger so you can avoid the need to take the gloves off mid ride. This thoughtful design prevents any heat you have accumulated from being lost as you fumble mid-ride to look at your maps or text a friend to meet.

I’ve touched on it already with reference to the presentation box the apparel arrived in, but Quanta Vici haven’t scrimped on style in their focus on functionality. The sleek black material and delicate gold tag seamlessly transition these cycling gloves into day wear.

Similarly, not limited to cycling, the Quanta Vici socks are perfect for various winter crossover sports such as skiing, snowboarding, or hiking, providing your boot’s aren’t super high or tight and so accommodate the battery pack which is discreetly placed in a small pocket on the top outer-side of the leg. As such, the socks offer greater value for money for those who participate in multiple sports and can make use of the apparel throughout the cold season. 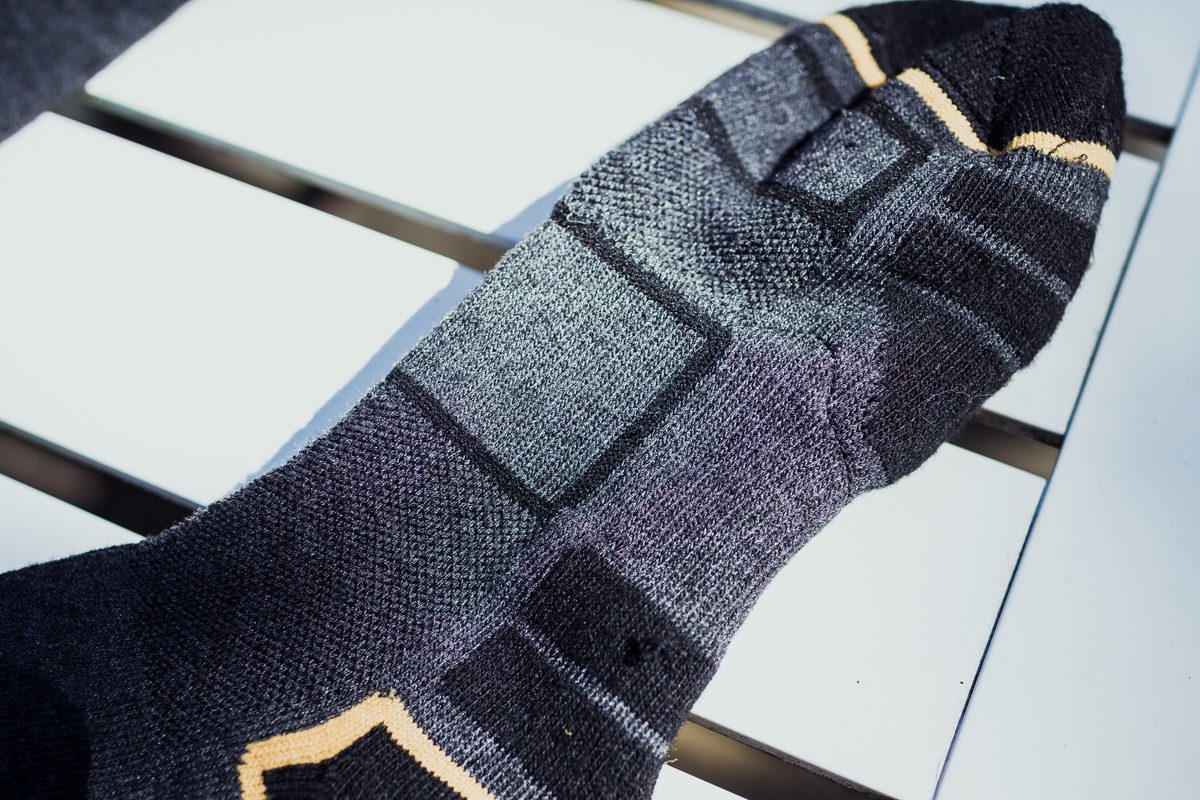 The material of the socks varies in thickness to complement the contours of the foot and add support to common pressure points. Made from a thicker more luxurious wool than I usually ride in, this did make my cycling shoes a little tighter than I would like and didn’t offer much wiggle room, so to speak. Otherwise, the material felt very comfortable against my feet and, like the gloves, they maintained a constant temperature with an even distribution, throughout my ride.

Again, similar to the gloves, the longer (leg) length helps promote the temperature regulation to the foot and toes below, plus the compression ribbing Quanta Vici have incorporated in the design is said to improve blood circulation too.

The size charts were pretty accurate for both the gloves and the socks, but I would advise anyone who is in-between sizes, as I was to opt for the smaller of the two. I took the larger of the two and the gloves are a little too big. That said, I have plenty of room to double-up if needed.

Rather skeptical of the term “game-changer” as most people are, I am open to the fact that on the rare occasion a product is launched that makes a huge difference to your riding capabilities and/or style and thankfully, this is one of those occasions. Now, with the help of Quanta Vici gloves I can take to the road much earlier than usual and make the most of the sunny but somewhat cold spring months.