What tire pressure do you run on your road bike? Before you read on, write down that figure. 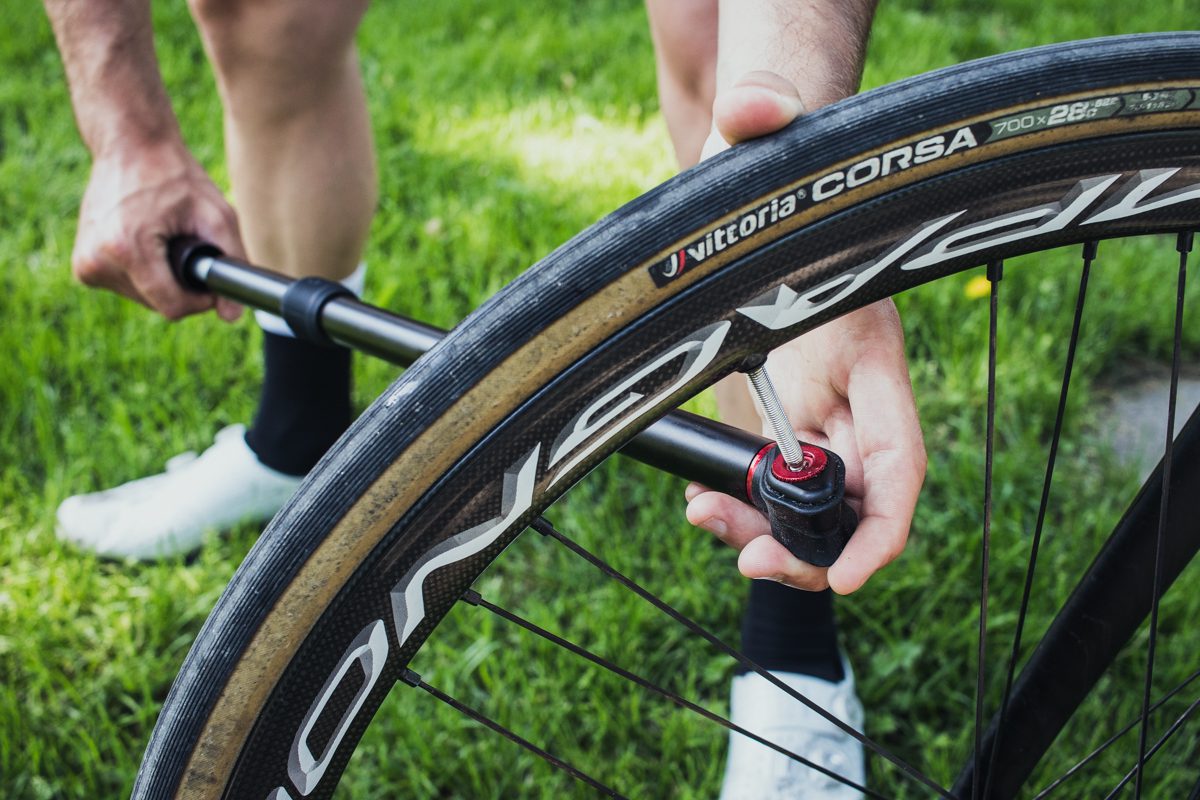 Last spring, I landed in Austin, Texas, trekked to Mellow Johnny’s, the bike shop that Lance Armstrong owns, to pick up my rental road bike. While I was in the Lone Star state for business, I extended my stay and got a long ride in the heat to see what Texas had to offer. (It offered lots of subdivisions and traffic, as it turned out.) As I picked up the bike, the helpful mechanic asked what pressure I’d like. “Sixty-five p.s.i. sounds good,” I said. He looked at me like I was crazy, then said, “Are you crazy? You should be running 110!”

In September, I was in Sarasota, Fla., with my dad to do a little bonding and riding. The rental bikes arrived. “Brand new bikes for you,” said the helpful gentleman who delivered them to our hotel. “I put the pressure to 120.” When I told him I’d be dropping it significantly, he shook his head as if I was a fool and said, “Enjoy your flats.”

In October, I was in Chicago. I picked up my loaner at Rapha. “Pressure is at 100 for you,” the concierge said cheerily. I didn’t bother arguing. I just rolled out the door, around the corner and dropped it to 65.

Now, as you listen to these anecdotes, consider what you wrote down. Where do your sympathies lie: with the bike shops I rented from or with me?

Until a year or two ago, my answer to the p.s.i. question was simple: 110 p.s.i. When I started riding and racing road bikes, I was told that you always, always , run 110 p.s.i. The rationale passed down like gospel was, “Lower is slower,” and, “Pump it up or you’ll pinch flat.”

But everything changed for me when I listened to a podcast featuring Silca CEO Josh Poertner (who advises WorldTour teams on aerodynamics) and Jan Heine, who opened my eyes to the science behind optimal tire pressure. I’m not an engineer but I’ll try to sum up the research. High pressure feels faster because it makes for a bumpy ride (also called suspension losses), but it’s not actually faster. These bumps sap your energy and fatigue you for no speed gains, so you are better off riding lower pressure. Lower pressure is not only as fast, but also improves tire grip by allowing the tire to conform to the road surface better. Finally, wider tires at low pressure do a dramatically better job of protecting you from pinch flats than narrower tires with high pressure, while also providing improved grip and lower energy loss from bumps. (Just make sure the width of the tire does not dramatically exceed the rim size.)

In the WorldTour, most teams are running 25-mm tires. Pressures are coming down. And yet, old habits and high pressures die hard. I’ve found that talking about tire pressure is a lot like politics. I’m either preaching smugly to the converted or looked upon as a crazy person who has strayed from the light. Racers I know wouldn’t dream of going lower than 110. The owner of my local bike shop scoffs at low pressures. Clearly the well-established bike shops I rented from during the previous season haven’t gotten with the program.

Change is hard. The four stages of change are denial, resistance, exploration and acceptance. Most people I meet are in Stage 1 or 2 with little appetite for entering Stage 3. Even pro riders resist change. As I was corresponding with Poertner, he mentioned that it’s not just enough to show data to elicit change; you have to challenge long-held beliefs and encourage a new mindset. “We counsel our pro riders to stop equating high-frequency vibrations and harshness with speed and start seeking out smoothness,” Poertner said.

So, if you’re in the acceptance camp, pat yourself on the back (at least until the data changes again). But if you are in the resistance phase, maybe you’d consider exploration this year so you can go faster with less fatigue.

First, with the right tire. “Ideally, you will install a tire that, while inflated, has a similar width as the rim,” Ben Waite from Zipp said. If you’re on wider rims, such as those of most newer carbon wheels, you’re running 25 mm or wider tires.

Next, get ready to go low. “If you start at a pressure that is harsh and keep lowering by 5 p.s.i. until it feels smooth but not squishy, you will likely be
Shedding within 5 to 10 p.s.i. of optimal,” Poertner said. I’ve found that 65 p.s.i works with my own weight, wheels and tires. You’ll have to find what works for you and your equipment.

Finally, roll with it. Just ride this lower pressure for several months. Don’t be scared off by a flat or two. Give it time. You will love the smoother comfort you get. You won’t sacrifice speed. If you still aren’t happy, go back to 110 p.s.i. and enjoy the bumps. But if I had to bet, you’ll enjoy the ride and can join me on the Isle of Tire Pressure Smugness. It’s cushy and life just rolls by.

Now, if I can only convince my next bike hire to lose the pressure.