The Ultegra R8100 groupset is here, so let’s look at the juicy details of the new components.

The most notable changes are the 12-speed drivetrain and an evolved wireless Di2 platform, which delivers even faster shifting across all 12 gears. Shimano has provided other updates as well—new shifter and hood designs, updates to brake performance (and maintenance) and three new carbon wheels all round out the latest Ultegra groupset.

In the new Shimano Di2 system, a central multi-port battery connects to the front and rear derailleurs, while the shifters connect to the rest of the system wirelessly. Although the levers transmits sift signals wirelessly, the company says the new system manages to get a 58 per cent reduction in rear derailleur shifting time and a 45 per cent reduction in front derailleur shifting time, and that’s compared with the pervious generation of Dura-Ace. 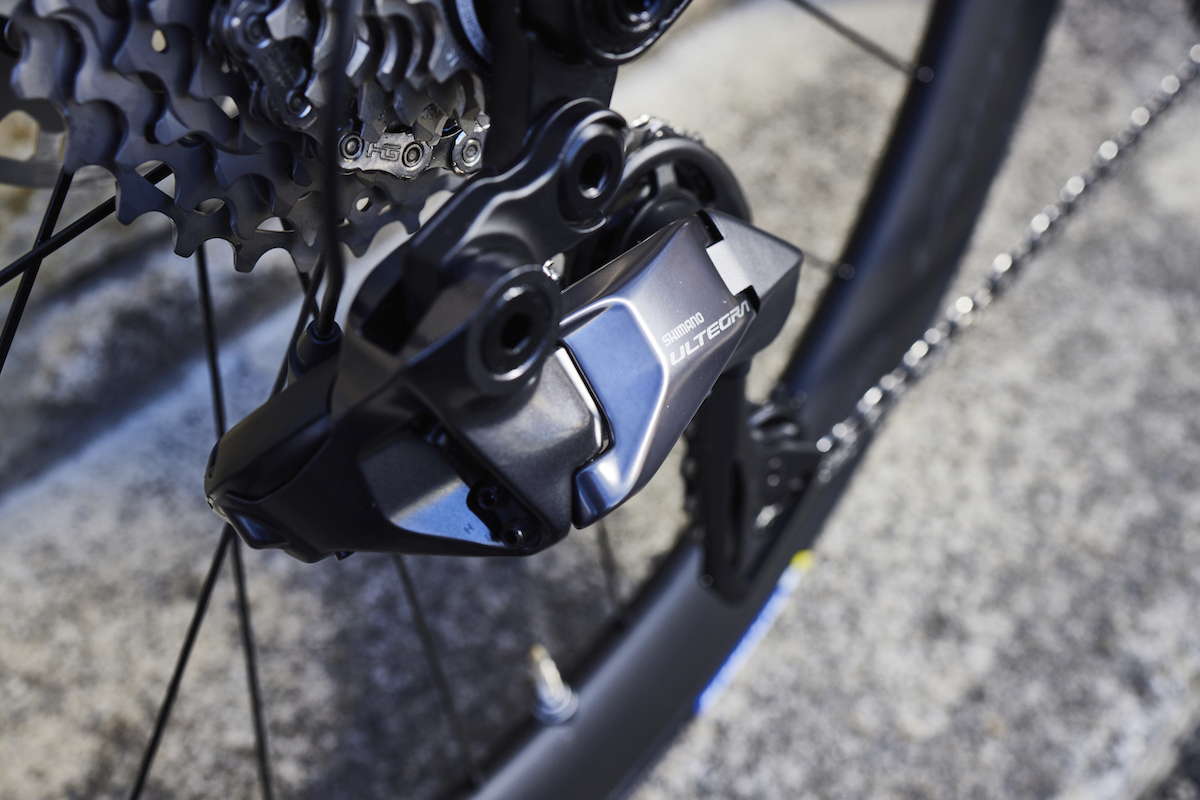 The junction box, which previously corralled all Di2 components and battery wires in the handlebars, has been eliminated completely from the new generation’s system, which simplifies the build process.

Now, smaller-diameter SD300 wires connect the derailleurs to a single battery, whose charging port is integrated into the rear derailleur. Shimano says the battery should last about 1,000 km per charge. 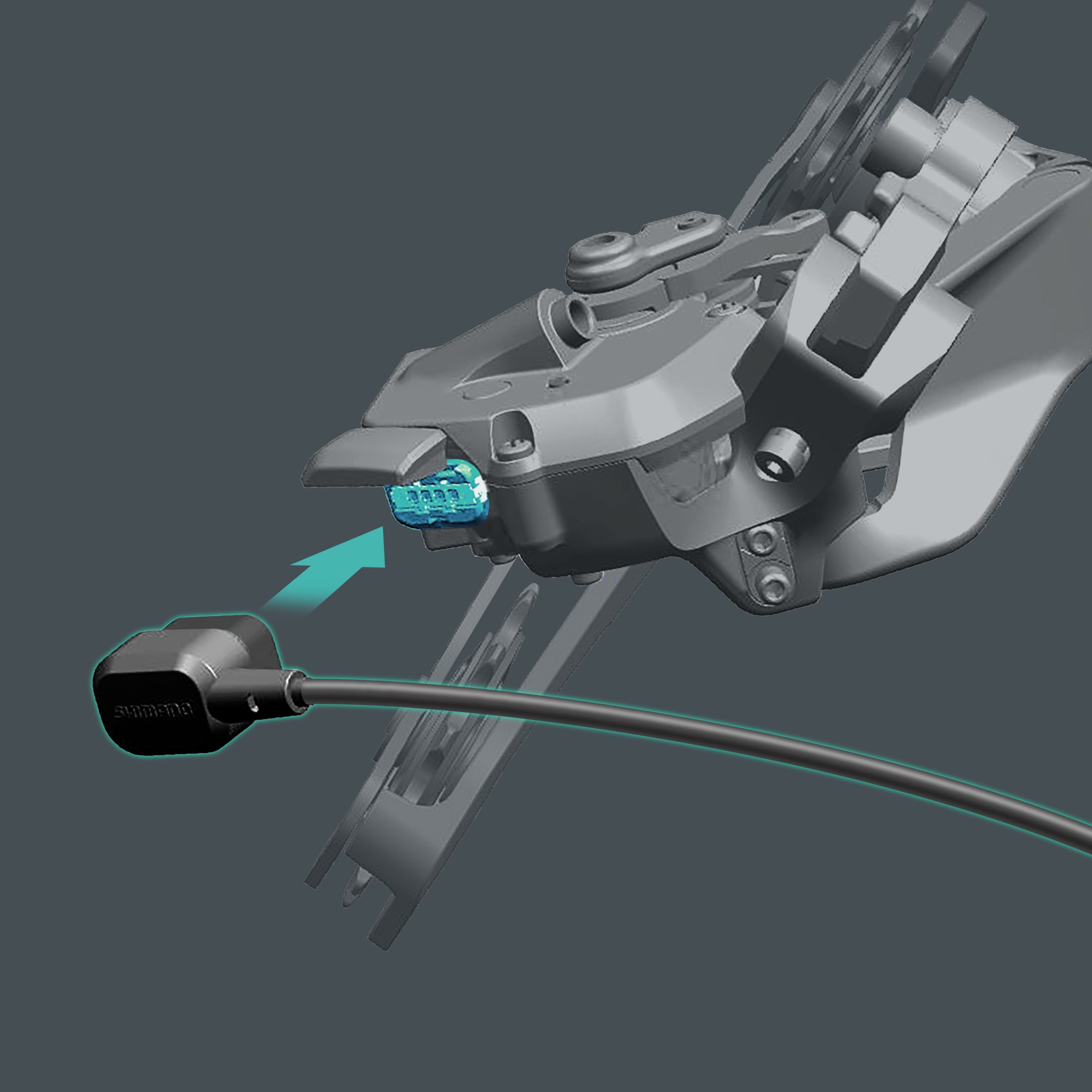 This groupset is only available in Di2, and does not have a mechanically actuated shifting counterpart.

The 12-speed chain is also borrowed from the mountain bike side of the company’s inventory— it’s the exact same as the Shimano XT M8100 series. 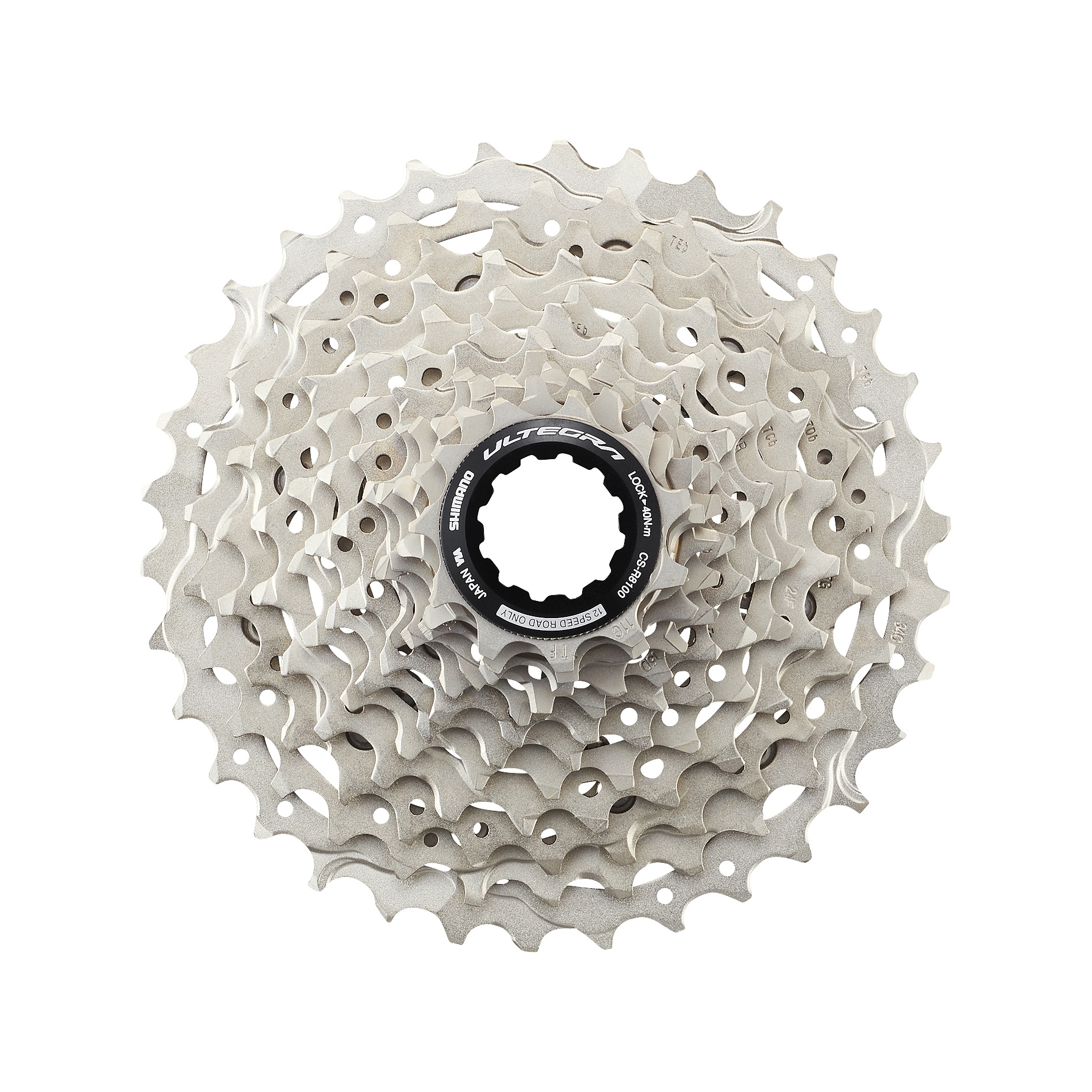 The CS-R8100 cassette keeps the 11-tooth smallest cog from previous generations while optimizing the “sweet spot” ( sixth, seventh and eighth cogs) gears in the middle of the cassette. It comes in 11-30 tooth and 11-34 tooth configurations.

The latest Ultegra is compatible with 11-speed freehub bodies, so riders won’t have to buy new wheels to use this groupset. 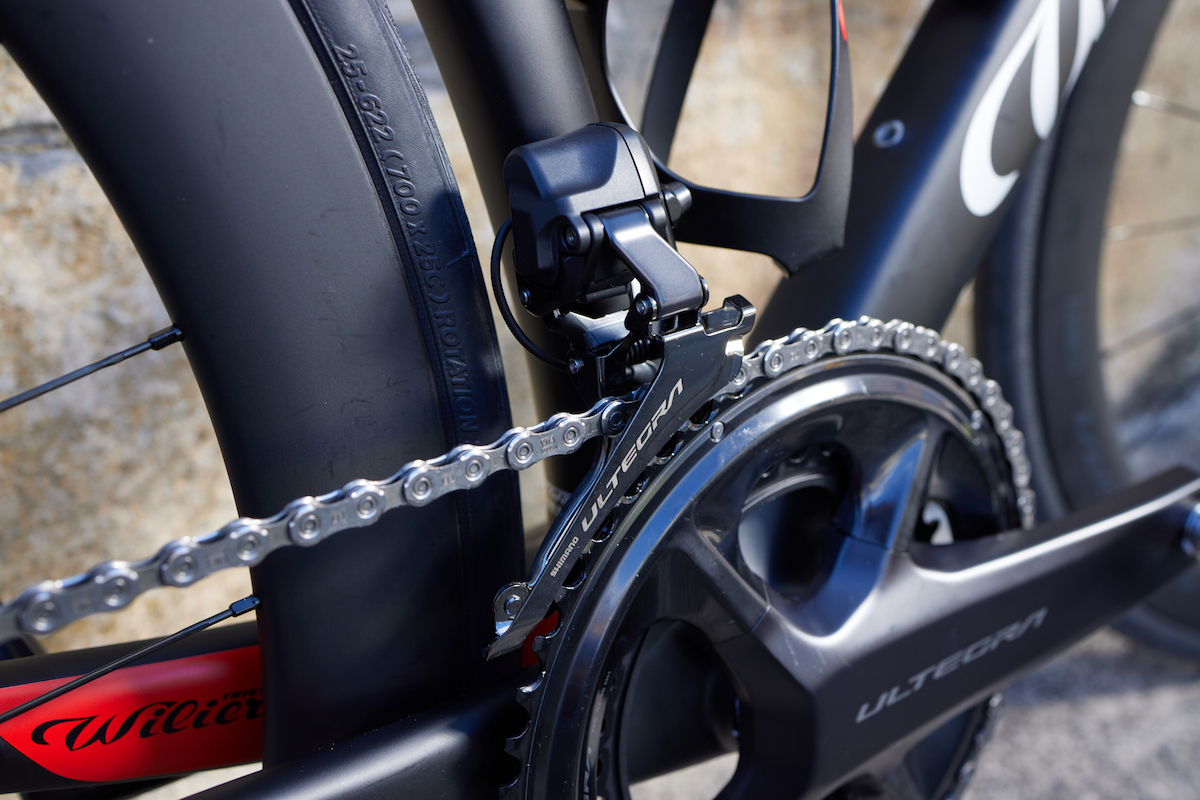 At 110 g, the FD-R8150 front derailleur is smaller and lighter than the previous generation (down from 132 g,) and has a nice black finish to the metal. 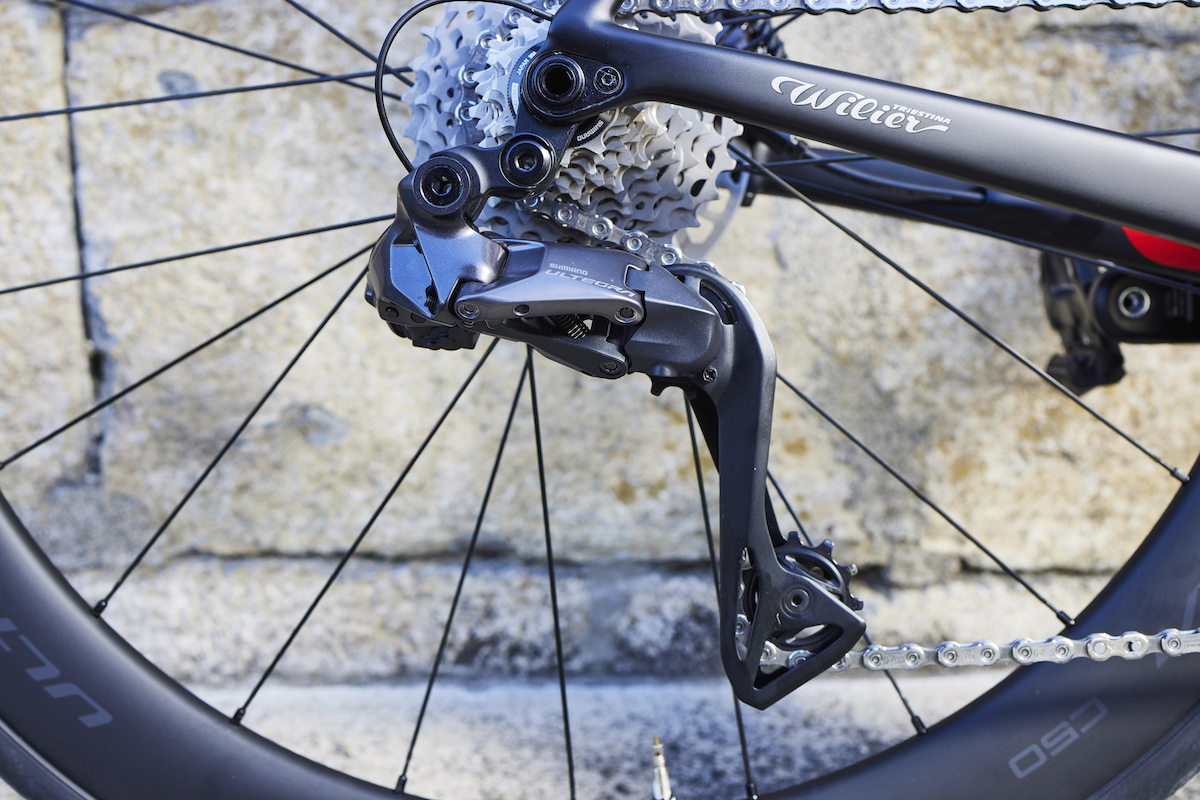 The new Ultegra rear derailleur (RD-R8150) is compatible with 11-30 tooth and 11-34 tooth cassettes. It uses Shimano’s low-profile Shadow rear derailleur design, which can also be found in many of the off-road groupsets. The rear derailleur now has integrated D-Fly connectivity, Shimano’s term for the near-field network it uses to connect to a bike computer or its phone application.

The previous generation of Dura-Ace saw the debut of Shimano’s crank-based power meter. Ultegra is getting a power meter, too, with availability coming in the months ahead. Training with watts has become more and more common among riders, so Shimano wanted to make sure that its second-tier group also had a power meter. But, to call it an “Ultegra power meter” is not exactly accurate. The Ultegra meter has the same electronics, same strain gauges, same internal rechargeable battery and same transmitter as Dura-Ace. The slightly heavier Ultegra power-meter crankset, however, is at least $380 cheaper than the new Dura-Ace.

Inspired by Shimano’s GRX groupset, the new Ultegra cockpit’s hood height and position are designed to feel more natural than the previous Ultegra Di2 generation. The hoods curve inwards somewhat and are slightly taller than before. The increased height is in part to give riders a more secure grip on the hoods over varied terrain, but they also had to be grown slightly due to the added wireless transmission technology.

The hoods house a 16-mm wide CR1632 coin-cell battery that Shimano says should last around one-and-a-half to two years, as its only use is to transmit the Di2 button’s binary action. 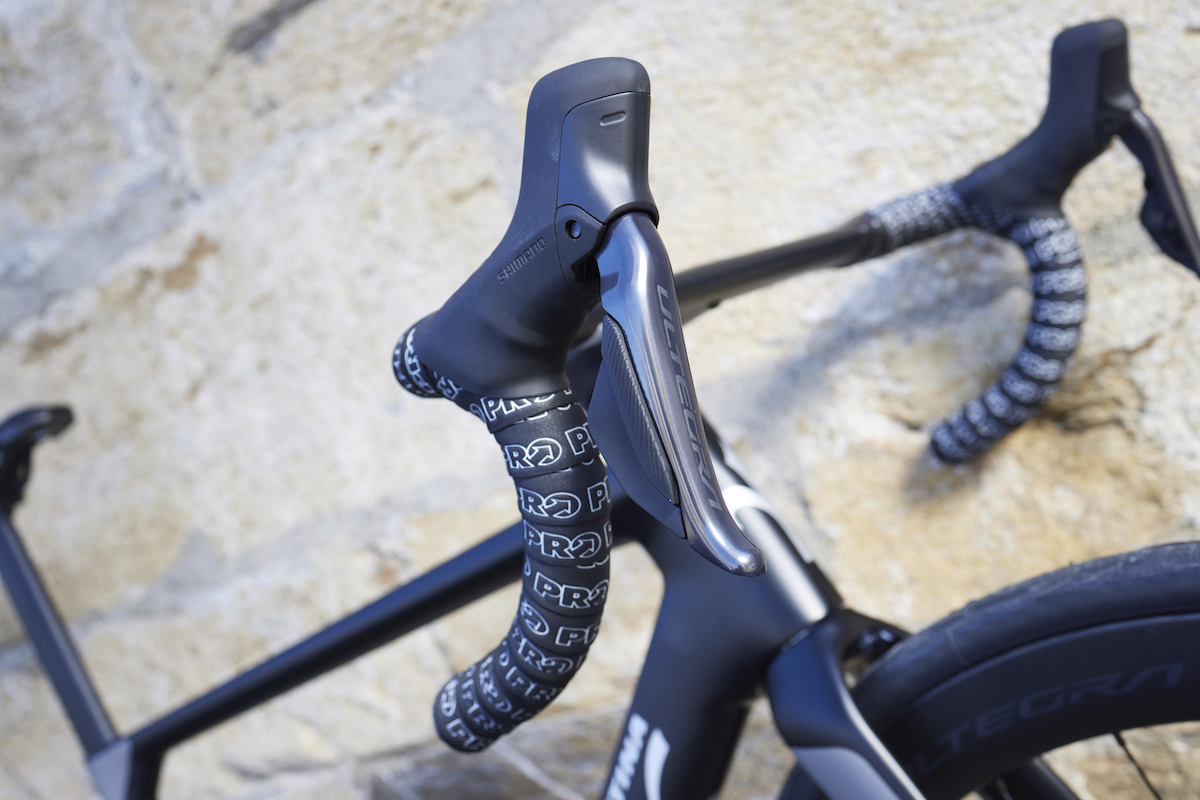 Shimano also extended the lever body reach by 4.6 mm, in order to create more space between the blade of the brake lever and the handlebar.

Just like older generations, the new Ultegra Di2 has three switches: one on top of the hoods and two lever switches. The switches have been slightly redesigned to be longer, which makes them easier to reach while riding in the drops.

Canadian riders who spend time riding with winter gloves on will appreciate that Shimano has increased offset between switches, which makes it easier to differentiate between them. 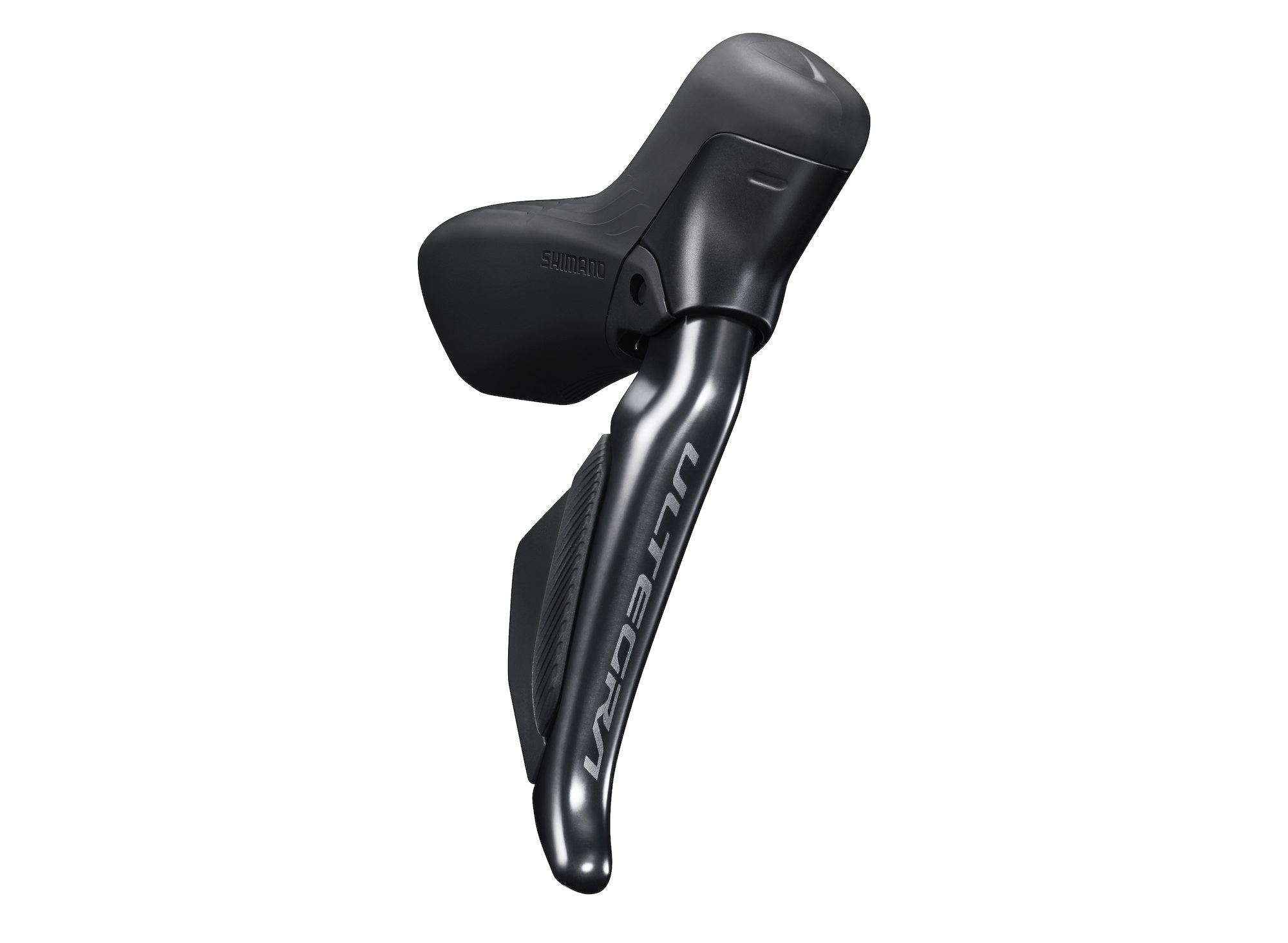 Now featuring Shimano’s Servo Wave technology, brake performance is improved thanks to a faster initial bite point along with a wider control area. This setup allows riders to modulate their braking more easily and precisely. 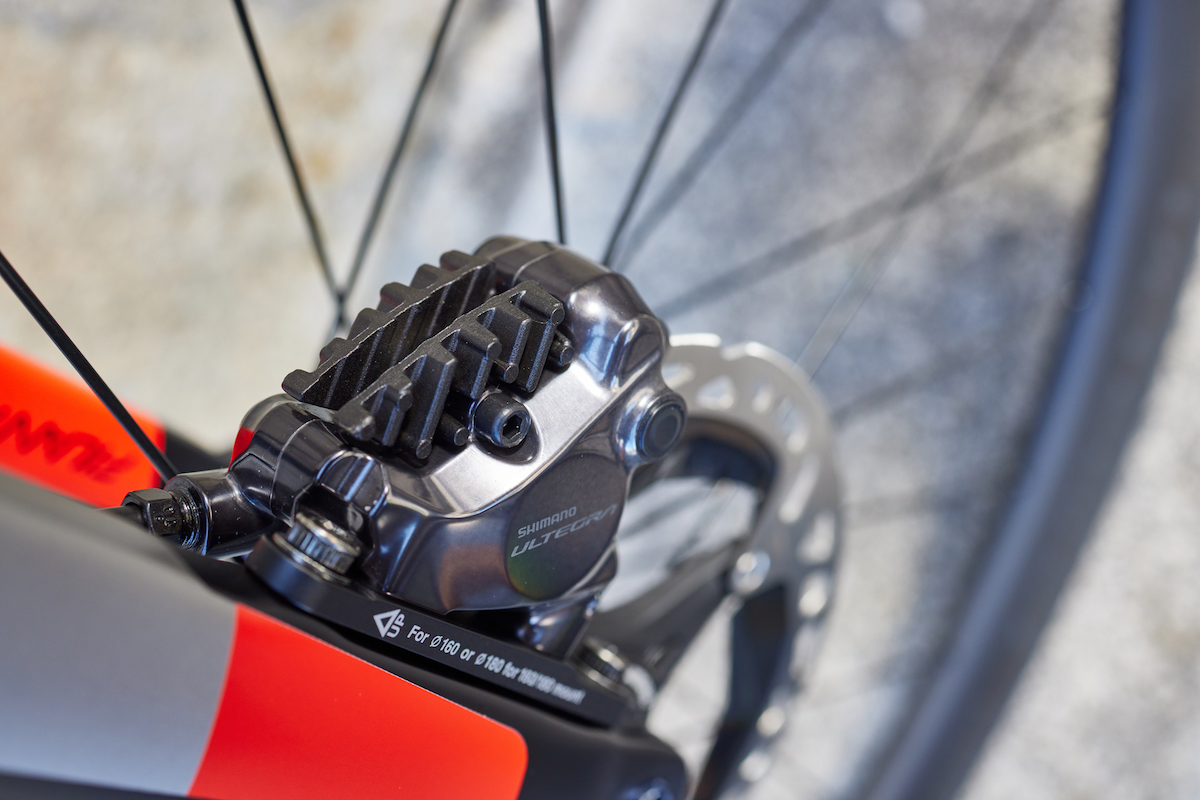 The pad-to-rotor clearance has been increased by 10 per cent to reduce noise when braking. Mechanically inclined cyclists (and actual bike mechanics) will be happy to hear that Shimano created a separate bleed port and valve screw that simplifies the hydraulic disc brake bleeding process. The system can now be bled without removing the caliper from the frame. 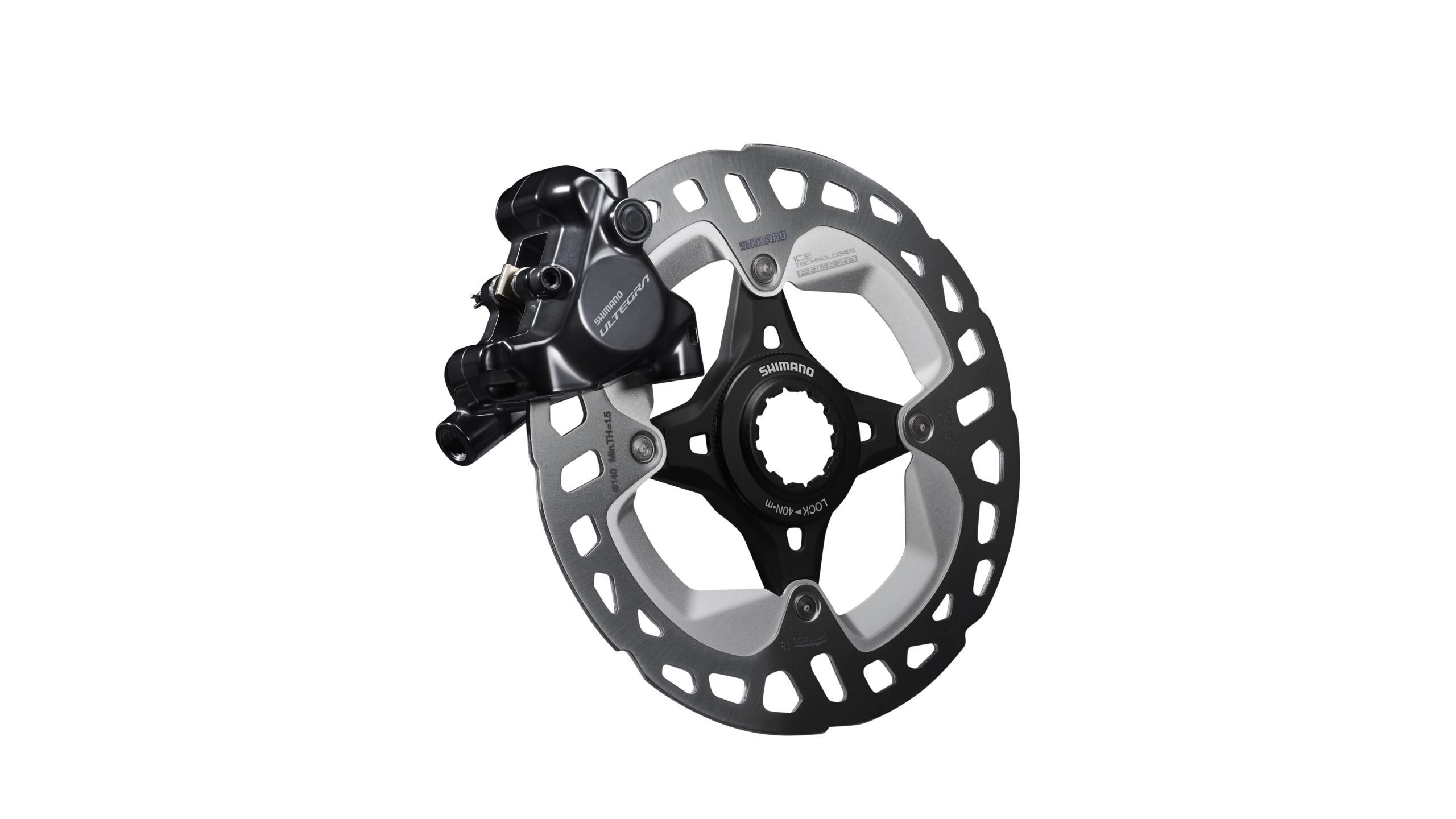 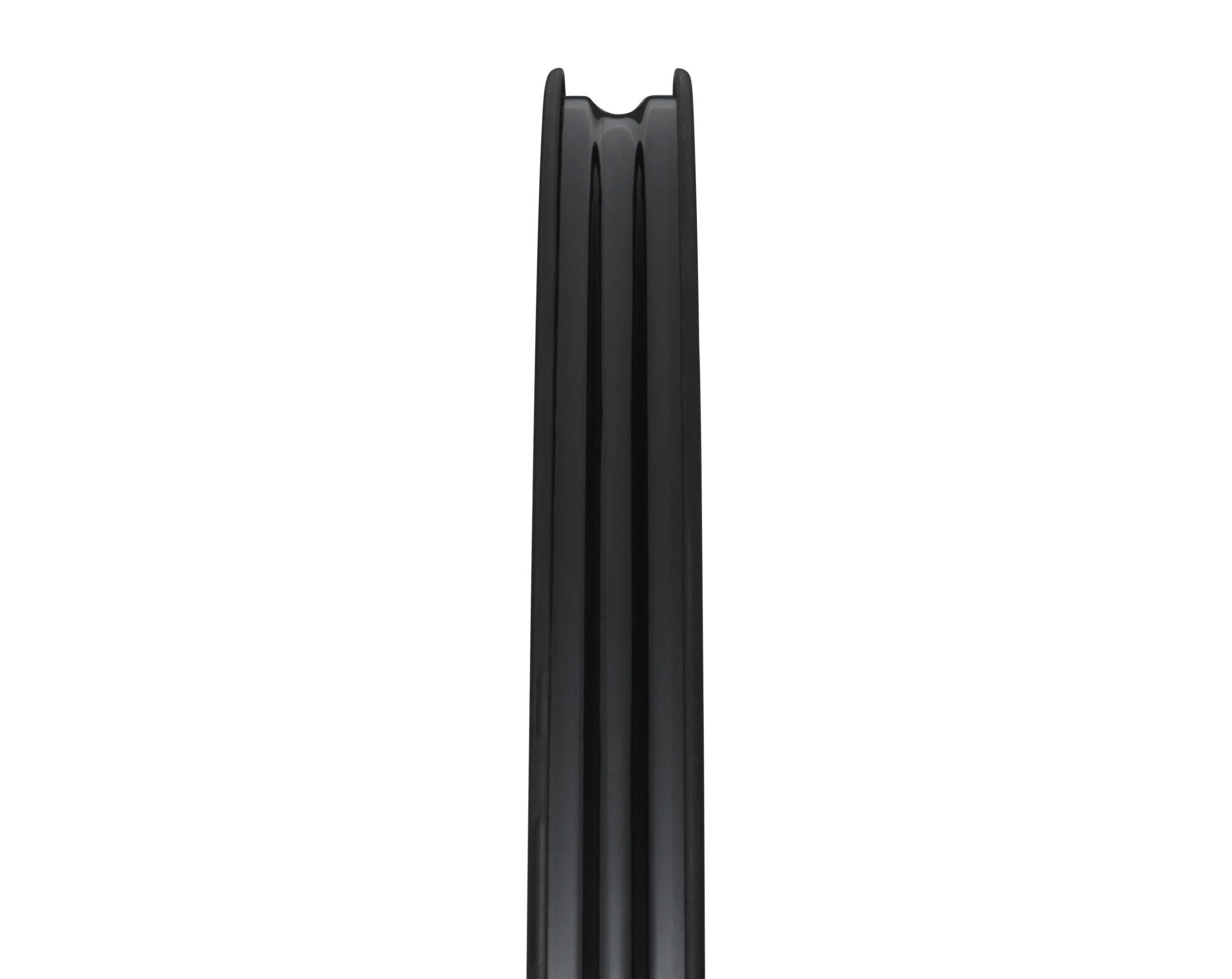 Shimano focused on improving the aerodynamics of the wheels, using faster and more stable profiles used across the range. All three models use 1:1 standard spoke lacing on the front wheel. The rear wheels have Shimano’s 2:1 Optbal spoke lacing design, which reduces the number of spokes on the non-drive side by half. All rims have the same aerodynamic shapes as the new Dura-Ace R9200 wheels. 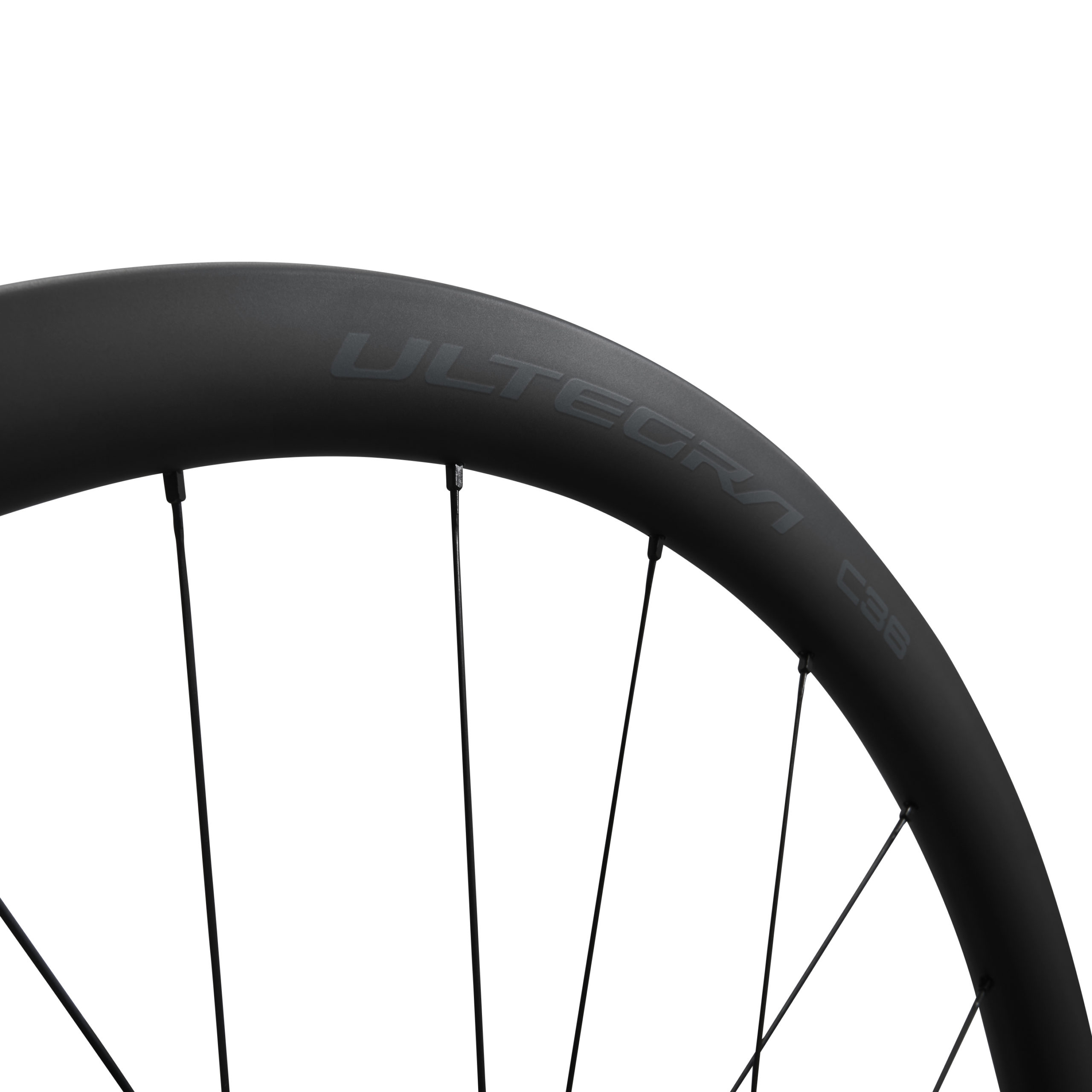 There are three different rim depth options for the new Ultegra wheelsets. The C36 wheels are the shallowest and lightest, designed for climbing. 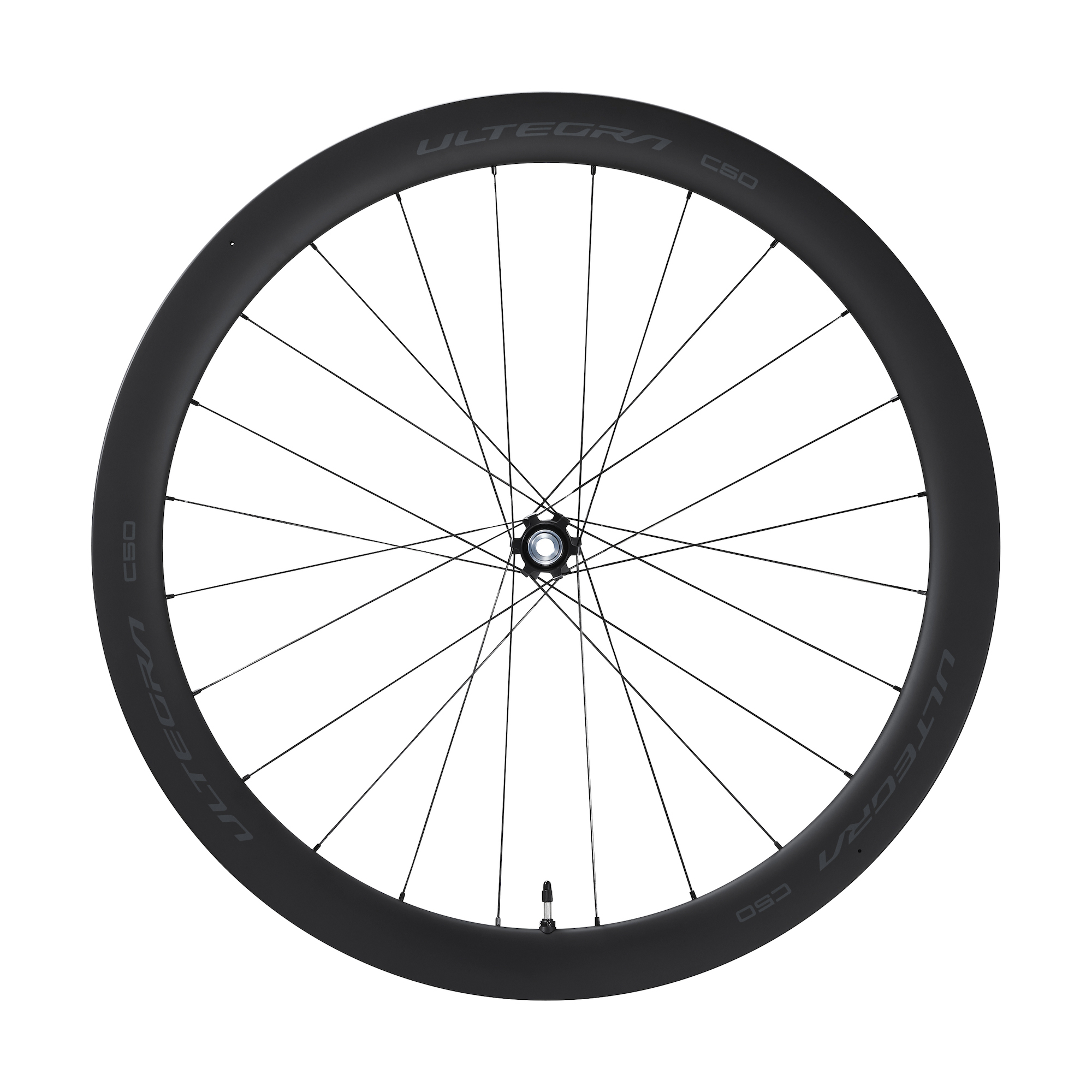 The C50 wheels have a five-watt reduction in drag compared with the current Dura-Ace C40-TL wheels. The C50 are being positioned as all-around wheels that balance aerodynamics, weight and rigidity. 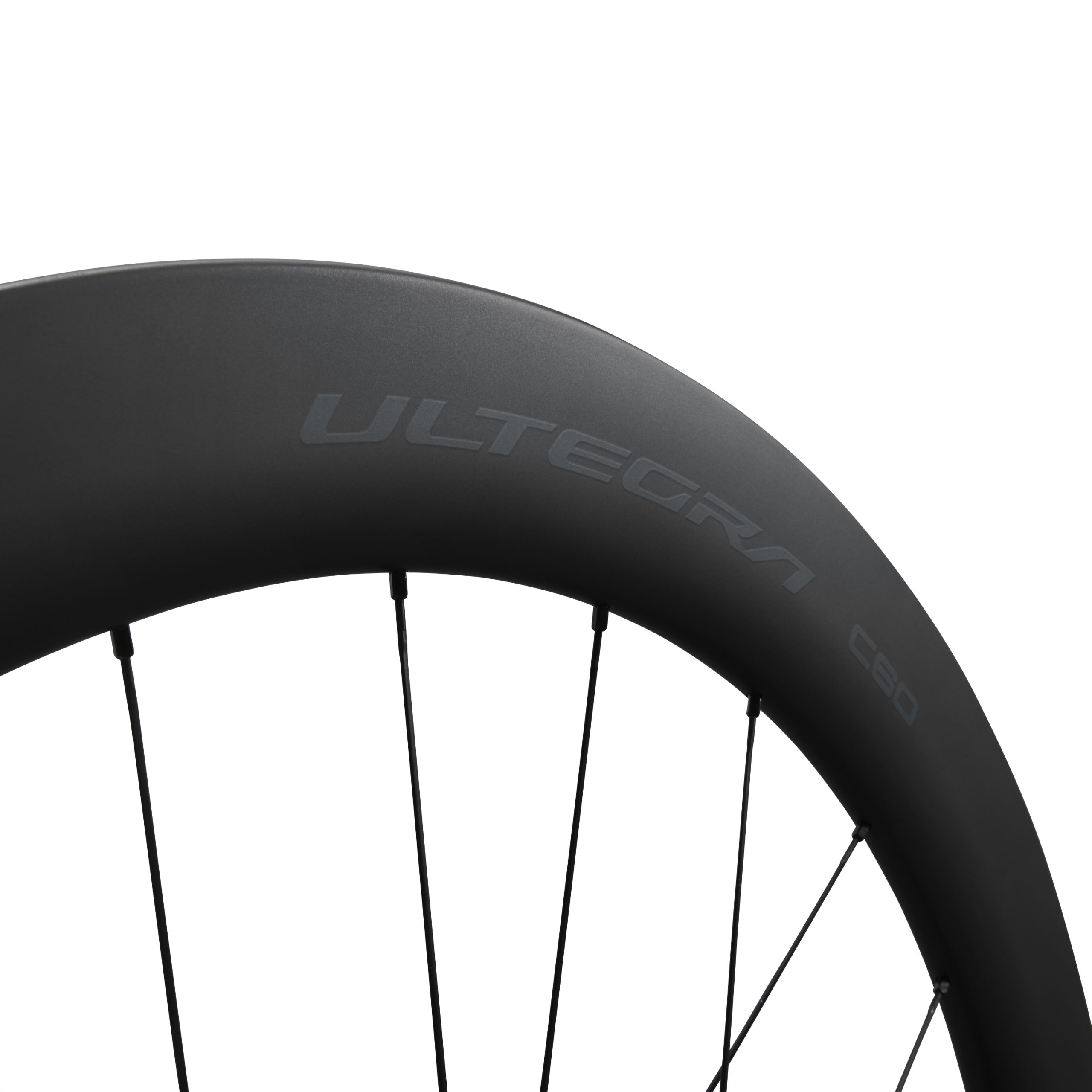 Finally, the C60 wheels are aerodynamically and structurally optimized for sprinting and high-speed pursuits. Shimano says these wheels are also good for larger riders, who wouldn’t be as affected by windy conditions paired with deep rims. 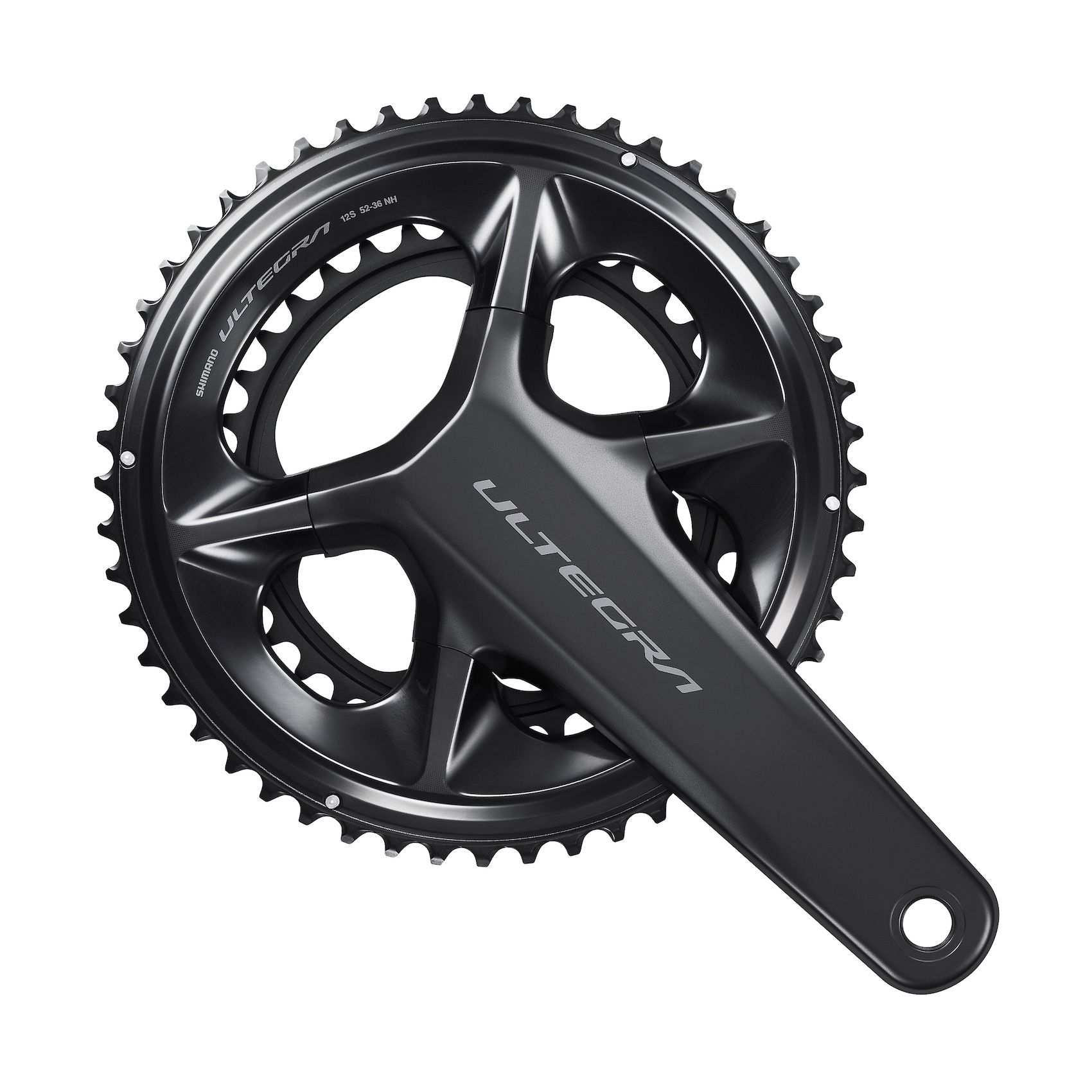 The Ultegra R8100 crankset continues to use Shimano’s 24-mm spindle standard. The Ultegra cassette fits on current 11-speed-compatible freehubs. The updated Di2 system with wireless shifters makes installation easier than before. This groupset will make upgrading to 12-speed easy for current Shimano users.

Weight, price and availability of the Shimano Ultegra R8100 group

Shimano says the Ultegra R8100 group is about 8.2 g heavier than the R8000 series. That comparison is with a 50/34 tooth crankset without power meter. For more information, see “Weights and Canadian pricing for the new Shimano Ultegra R8100 group.”

You should be able to see the new group on complete bikes later this month. Aftermarket availability should start in October.