The engineers from Japan just had to see the gravel first-hand in North America. “They literally don’t have any gravel roads in Japan. There’s no gravel events, nowhere to test product, no culture of it. The gravel scene – it’s happening here,” said Kieran Andrews.

Andrews is the co-owner of Wild Rock Outfitters in Peterborough, Ont. He’s been riding and racing bikes throughout his life. Gravel has always been part of his rides simply because that surface is part of Ontario riding. In summer 2017, Shimano sent employees from Japan to different locales in North America, including Peterborough, to find out more about gravel. If it was going to release components for this style of riding, it wanted the parts to work well for those on the bumpy stuff. Before the end of that summer, the company assembled a group of 16 people connected with the scene. It was a pretty diverse set with a few bike shop owners, a race promoter, a web designer, some engineers – all with a passion for adventurous outings. They became the Shimano Gravel Alliance, a bit like the gravel Avengers.

The Shimano Gravel Alliance started meeting at events, such as Rock Cobbler and Almanzo, roughly three times a year. “At each one of those, we’d get together, ride bikes, do the event, typically have prototype product to test, and then have a bunch of consultations, maybe with an apparel engineer, footwear engineer or component engineers. We’d have group discussions about what we liked and didn’t like,” Andrews, one of two Canadians on the squad, said. The Alliance riders had the Ultegra RX rear derailleur with clutch before its debut in April 2018. They also used PRO bars and frame bags before they went public. The GRX components weren’t on any Gravel Alliance bikes ahead of the official launch early this past May. The team did get to look at a few parts in isolation, though. They also provided a lot of input that influenced the final product.

“The groupset needed to hit the middle of the market where the goal is to get more people having more fun riding bikes more often,” Andrews said. He really wanted Shimano to get away from its traditional system of developing and releasing products: start with top-of-the-line, professional grade stuff (which means expensive), and then translate that technology into more accessible components. Andrews practically insisted that the new GRX appeal to the average rider, including the average rider’s wallet.

When GRX landed, Shimano revealed that the gravel gruppo has first-, second- and third-tier parts. The component levels, for those who speak road groupsets, run loosely from Ultegra to 105 to Tiagra. If you speak mountain bike, think XT, SLX and Deore. The cassettes available in the GRX sets come right out of the road and mountain groups. With respect to making GRX an accessible gruppo, Andrews, it seems, got his way.

He looked to the brake levers for a change. “I felt very strongly that riders needed more clearance at the levers, so that they could brake while still holding the bars firmly,” he said. Often, if you are riding with your hands on the hoods, only your thumbs are hooked around the bar, sort of. Your fingers probably splay out along each brake lever. On smooth roads, that grip can work fine. But on bumpy surfaces, you’ll likely want a tighter hold on the bars. Each new RX815 lever has its brake lever axis 18 mm higher up into its hood, when compared with a Dura-Ace lever. The high placement of the brake lever axis means you can squeeze the lever more comfortably with the force of your index and middle fingers, while your ring and little fingers can hold the bar beneath the lever firmly. You also won’t crush those fingers as you squeeze the brakes. 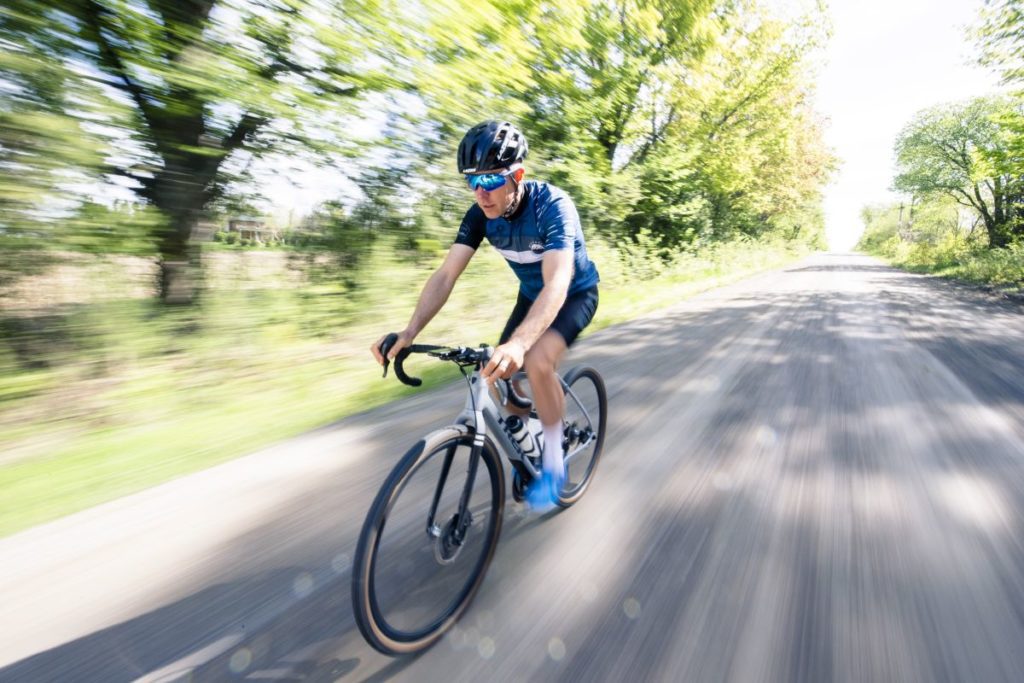 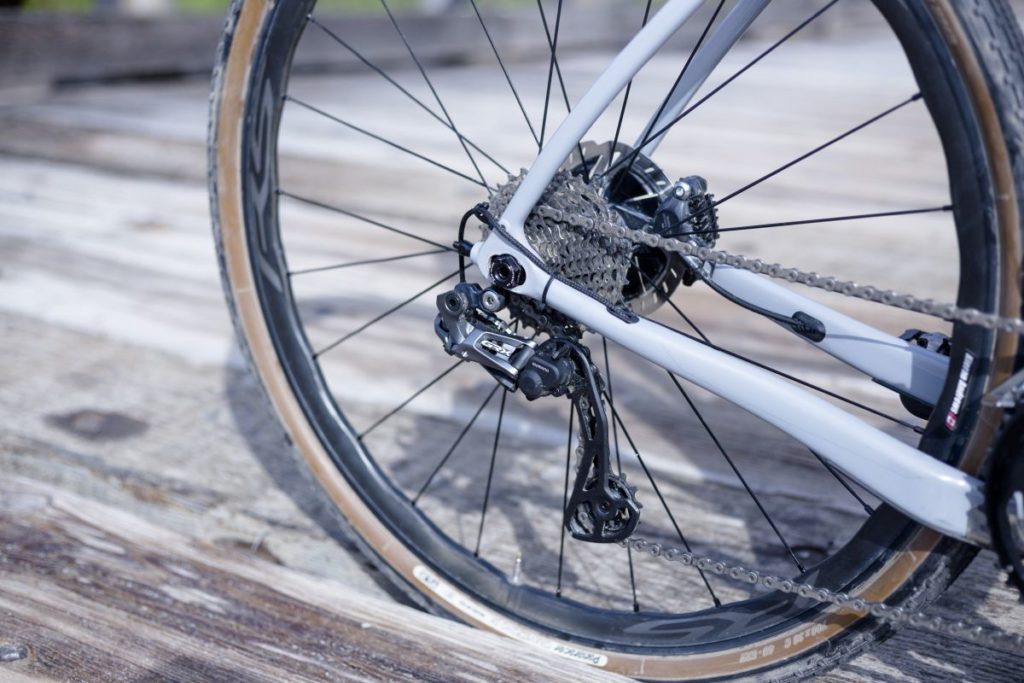 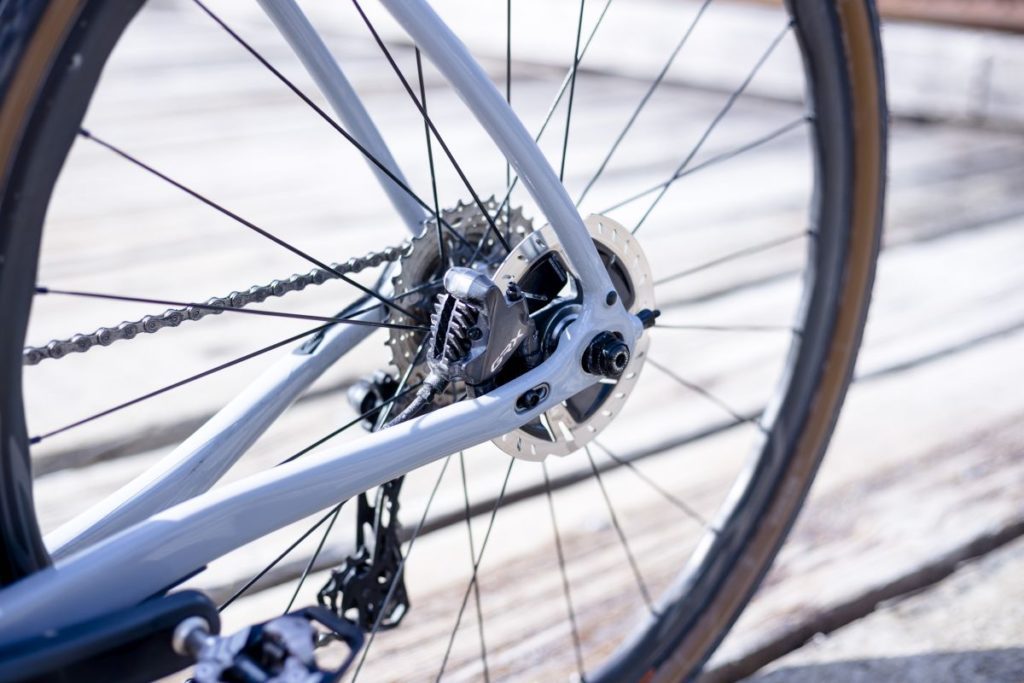 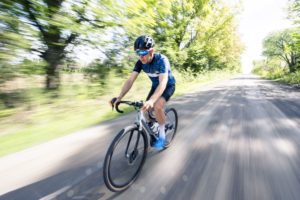 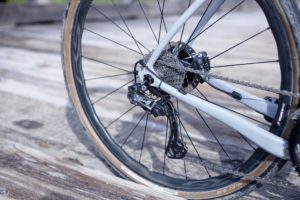 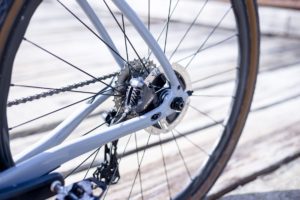 With GRX, top-mount brake levers make a return. With cable actuated systems, it was fairly simple to put cross-top brake levers on the bar tops. As companies moved to hydraulic systems, the top-mount levers disappeared. Shimano is the first major component maker to create a hydraulic top-mount brake to give you another option for slowing down. While the Japan-based company is leading in the brake department, it seems to be playing catch up with wheels, especially their internal rim widths. This dimension is important as a wider internal rim width lets you run a wider tire for better grip. It also ensures the best shape for the tire. With too narrow a rim width, a tire can get a more lightbulb shape, which reduces its effectiveness. The new hoops, in both 700c and 650b diameters, are 21.6 mm from hook edge to hook edge.

Now that GRX is out, Andrews hopes that bike brands will see the value of the groupset and start putting it on bikes. “As I’ve said, GRX should get more people more confident to ride in more places more often,” Andrews said. “That’s the goal for all of us, at every level. Whether you’re a passionate rider, an event organizer or, in my case, a retailer, it’s about opening the doors to more people to be happy riding bikes.”