The post-ride beer, a tradition for many riders, has long been a way to kick back and soak in the events of the ride. For many it’s great reward, but, although beer can taste super refreshing after a long day in the saddle, alcohol will actually make your more dehydrated in the long run.

Rally beer is a new answer to a nutrient-depleted athlete’s beer craving. The beer, a 4.9 per cent alc. golden ale, is specially brewed with artisanal Newfoundland salts and blackcurrants, making it a highly electrolyic beer. “Blackcurrants are rich in potassium, magnesium, and calcium which are critical electrolytes,” says Alan Wood, the founder and CEO of Rally Beer Company. Rally also contains sodium from the Newfoundland salts.

“The key differentiator for us is that we are a better for you beer,” says Wood. If you’re going to be drinking beer anyways, might as well have one that will benefit your recovery.

A beer for athletes

“I do believe it is important to build the community and the idea for Rally stems from our own desire to have a beer post-ride,” says Wood. “I felt there was a gap in the market that there was no better-for-you functional beer offering out there, so Rally not only embodies the values that drew me to the cycling community but it is also purpose brewed to be rich in electrolytes for that perfect post-ride celebration drink.” 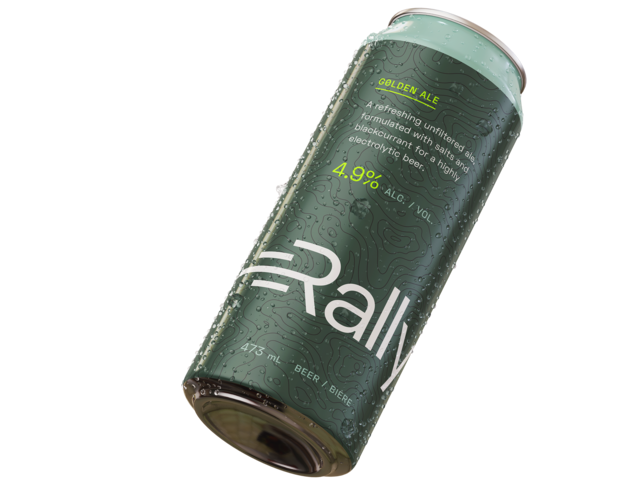 Rally just launched in Ontario, which Wood says has presented some “interesting challenges” during the pandemic. For now the beer is available in many LCBOs and the company will be working to have it available at popular ride-end spots.

Wood says the company is also in the process of developing a non-alcoholic option, in order to have a beer available to everyone (and possibly for some mid-ride refreshment).

To be honest, I was prepared for Rally to taste a little salty (similar to Gatorade, I guess). “The sodium content in Rally is designed to be in line with other functional sports beverages such as Nuun Electrolyte tablets,” says Wood. I found, to my surprise, that it was a crisp refreshing beer with no unexpected weird flavours. Personally, I couldn’t detect any saltiness.

I tried the beer after a relatively easy ride on a hot day. I wasn’t particularly dehydrated but even then I noticed I wasn’t feeling as depleted as I sometimes would after a post-ride beer or two.

If I’d had more than one or two Rallys, would I be less hungover the next day than if I was drinking a different beer of equal alc. content? Wood says he can’t really answer that, so it sounds like some further personal investigation is required (for science, of course).