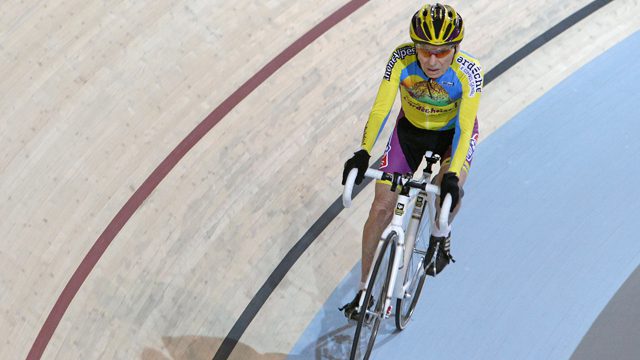 At 106-years-old, most people have retired from their careers and competitive sport. That wasn’t the case for the incredible centenarian cyclist Robert Marchand of France who worked as a lumberjack in Canada during his earlier years. Having set numerous age-group records, Marchant is hanging up the bike and will no attempt any more records. He currently holds the Hour Record for the 105-years-old and older category covering 22.547 km in 60 minutes on Jan. 4 of last year.

Marchand’s illustrious record-breaking career began in February 2012 when he rode 24.250-km in 60 minutes at the World Cycling Center in Aigle, Switzerland. The UCI created the Masters aged 100 and over category just for him when he decided he wanted to do something special to celebrate his 100th birthday. In 2014, he bettered that record covering 26.927 km before his most recent 105 plus record in 2017.

It was on the advice of doctors that Marchand has decided to not competing. He actually wanted to race a 4 km event but a friend of Marchand’s told Le Parisien he was told he’d need a co-pilot to do it.

His retirement means that is world championships titles in the 105 plus category he won in 2017 will have marked the end of his career.

Marchand has lived through two world wars. He worked as a fireman in Paris in the 1930s before moving to South America after the Second World War during which he was prisoned for not instructing the children of Nazis while working as a gym teacher. He also lived in Canada where he worked as a lumberjack before returning to France at the age of 76.

A member of the Ardéchoise club, Marchand was named the worlds greatest centenarian athlete by a group of researchers at the University of Burgundy in 2015. He was still riding on the weekends with his club last year and would frequent the gym to stretch. At 4’11, he was a competitive cyclist until his 30s before returning to the sport in his 90s.