For the third year in a row, the Tour of Alberta will draw pro riders from North America and abroad to the province that links the Prairies and the Rockies. The first two editions of the UCI 2.1 race stuck to the flatter parts of the province. But in 2015, the TOA finally takes advantage of the mountains to the west. The six stages are in the northwest of Alberta, only dipping as far south as Jasper. Below is the Canadian Cycling Magazine guide to the big event, with insights from Jeff Corbett of Medalist Sports, the TOA’s technical director and the man behind the design of each stage.

The Tour kicks off with a 19.6-km team time trial stage in Grande Prairie. “We thought this was a perfect year to do this. It gives teams an opportunity to get one more team time trial under their belts two weeks before Richmond.” The Tour of Alberta has a UCI 2.1 designation, which means only 50 per cent of the teams in the race can be WorldTour teams. The rest are professional continental, continental and national teams. With the world championships in Richmond, Va., later in September, many of the U.S. teams will be targeting the TTT to get on the podium at home. Alberta will be the last chance for teams to race in a team time trial before worlds. 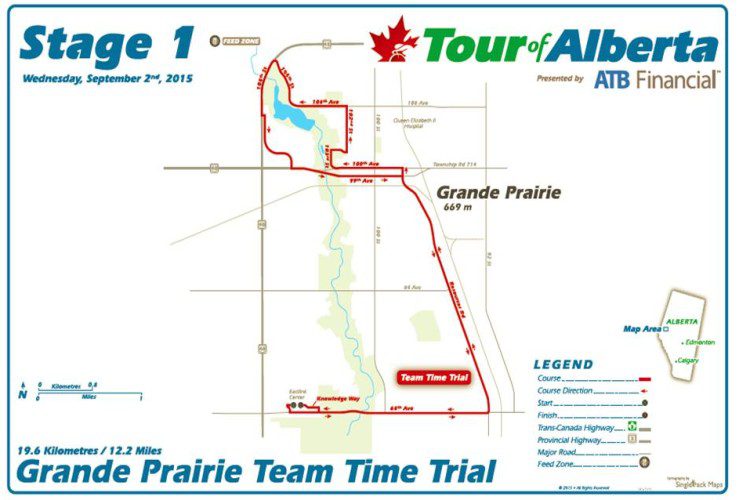 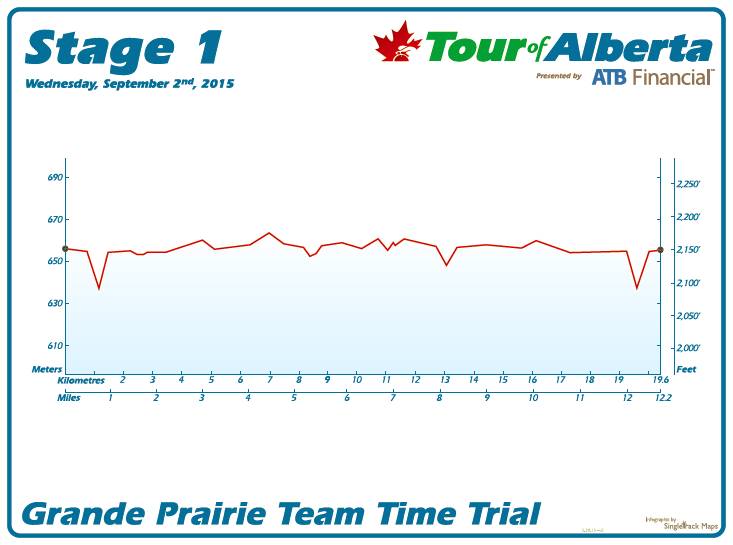 The second stage of the event keeps the peloton in Grande Prairie for a another day. Corbett describes the parcours as pretty mellow for the first 100 km, but it definitely has a sting at the end. As with stages in Drumheller and Lethbridge in previous editions of the TOA, Corbett uses the topography created by the local river, which in this case is the Wapiti River valley, to make a course with punchy climbs. “One thing I like about river bluff climbs is that usually they don’t have an immediate descent,” Corbett said “You climb up the bluff to a plateau. You can’t drift off back on a climb and bomb the descent and get back on.” On this stage, riders climb up the river bluff and onto a plateau for about 10 km before they descend. “You got to hang on up those climbs. There’s no immediate descent to save you.” 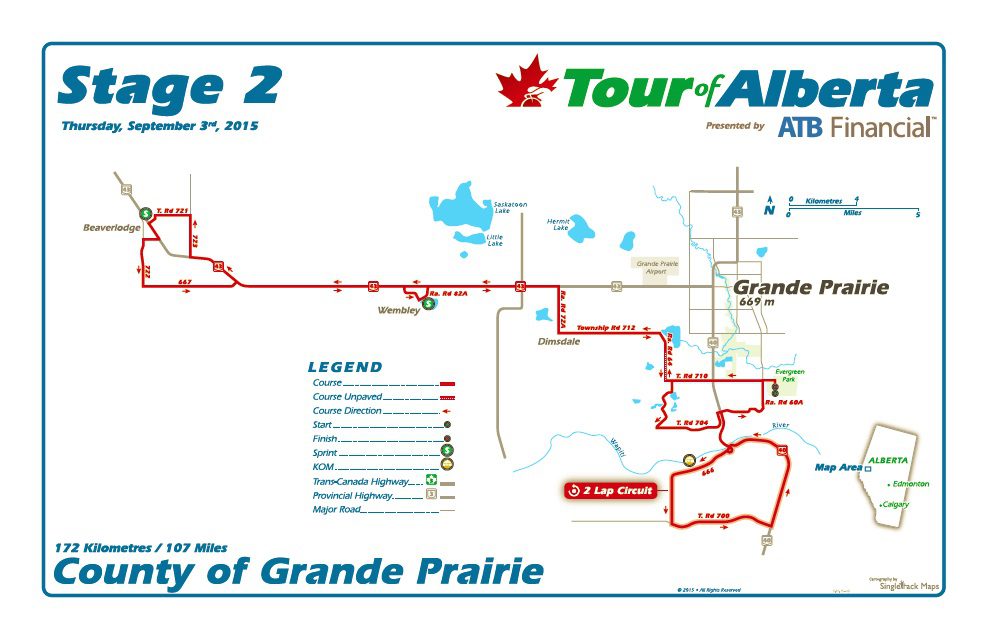 Stage 3 is the first stage in the Tour’s history that heads into the Rockies. It starts in Grande Cache and moves through rolling foothills toward the southeast. The peloton will come to Highway 16/Yellowhead Highway, which will take it to Jasper National Park. The bunch will then turn off onto Miette Road to the hot springs of the same name. This is where the grades really kick up. “It’s sort of two climbs in one,” Corbett said. “From where we leave the highway, it’s 17 km to the line. They’ll climb pretty good for about the first 6 km. That climb gets up to 9 per cent.” Riders will then hit the king of the mountains point before about 5 km of descending. The final 6 km feature a gradual climb, averaging roughly 8 per cent in the final 2 km. The scenery, especially the canyon that’s visible on the descent before the final climb, is spectacular. “It’s Alberta’s postcard to the world,” Corbett said. 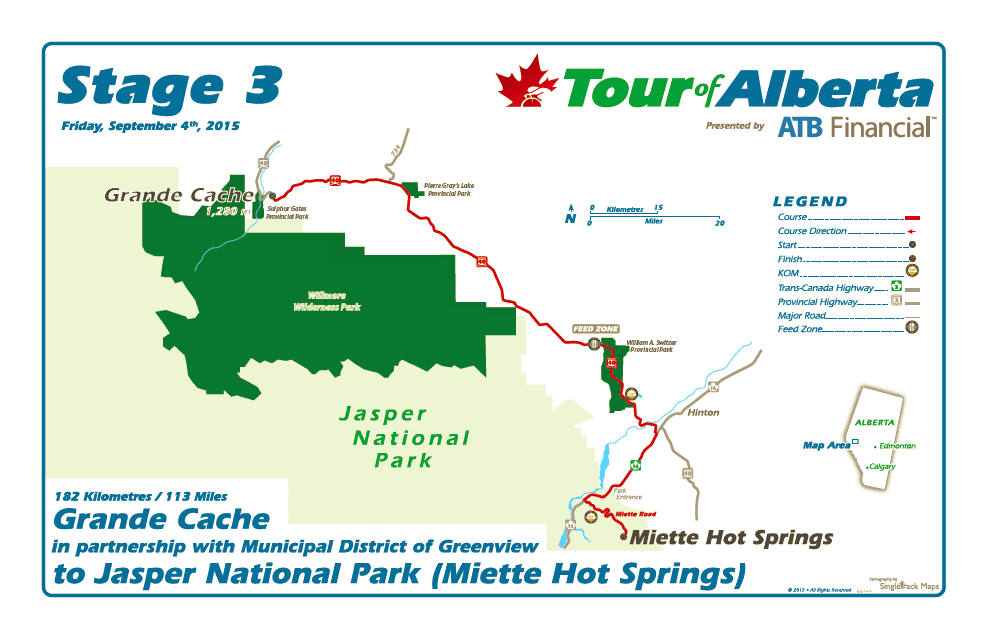 Point-to-point with a three-lap circuit, 162 km

The second day in the mountains keeps the action within Jasper National Park. After leaving the town of Jasper, the group hits a 54-km circuit on Highway 93A and 93, the Icefields Parkway. Then, it’s up Marmot Road. “This is real, bigtime mountaintop finish stuff,” Corbett said of the final ascent, which actually starts 2 km from Marmot Road, giving riders 12 km of climbing. “There are several sections that get to 8 or 9 per cent, but I think length is what’s going to take its toll. We’re talking something for a pure climber here.” 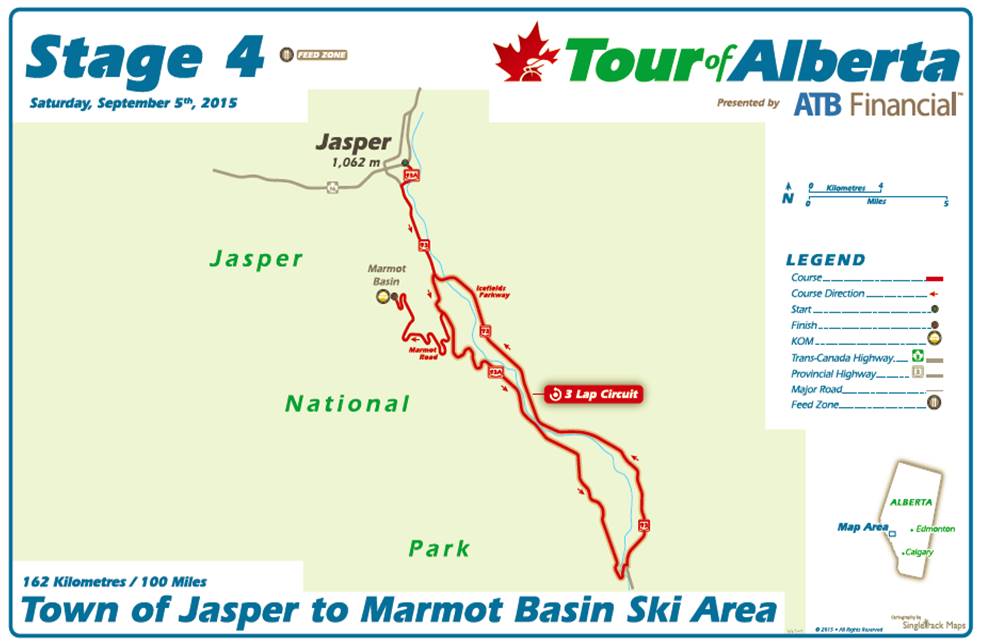 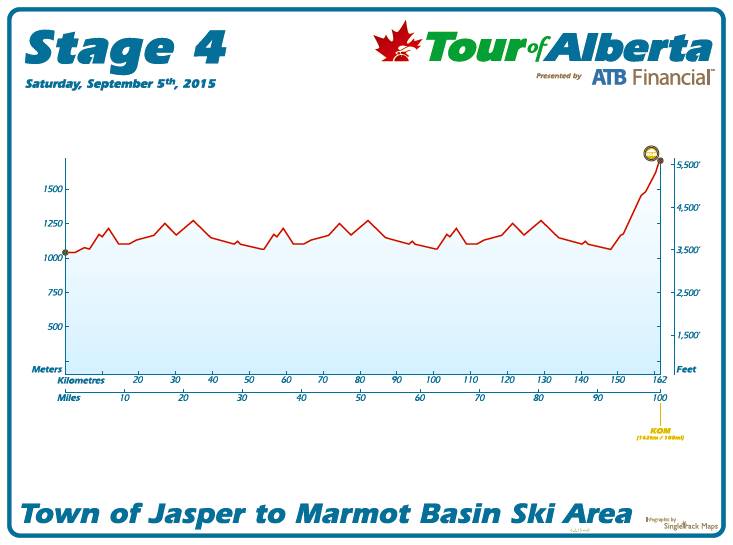 It seems like there’s only one way to get to get from Edson to Spruce Grove: a straight shot east on Highway 16. Corbett, however, found some other roads to make this flat stage interesting: 56.4 km of dirt roads throughout six sectors. “It’s not what we dubbed ‘Canadian pavé’ last year,” Corbett said referring to the dirt sections on Stage 4 of the 2014 TOA. “Those were dust-control roads. They take a gravel road and spray a layer of oil on it. Then they’ll roll it and pack it down to form a pseudo-pavement, but a pavement that will deteriorate over the course of six months. That’s what the Canadian pavé was, the broken-up remnants on dust-control roads.” Corbett said 2015’s bumpy surfaces are straight-up dirt roads with washboards, ripples and ruts. Teams will race hard to get to the dirt sectors first. It’s best to be up front for safety and simple visibility in the dust. It will be a long, dirty day with many rattled riders at the end. 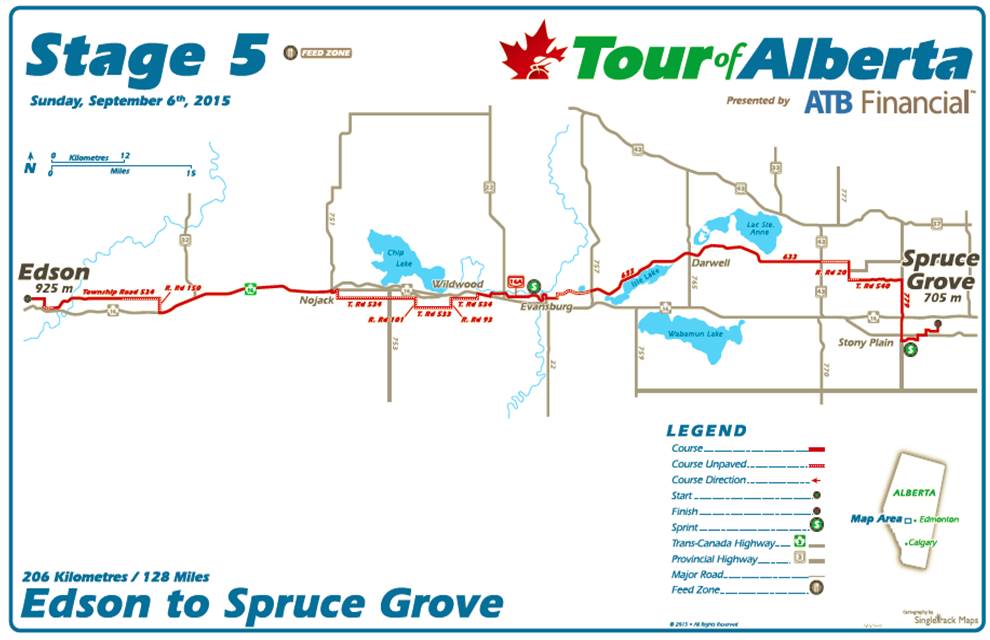 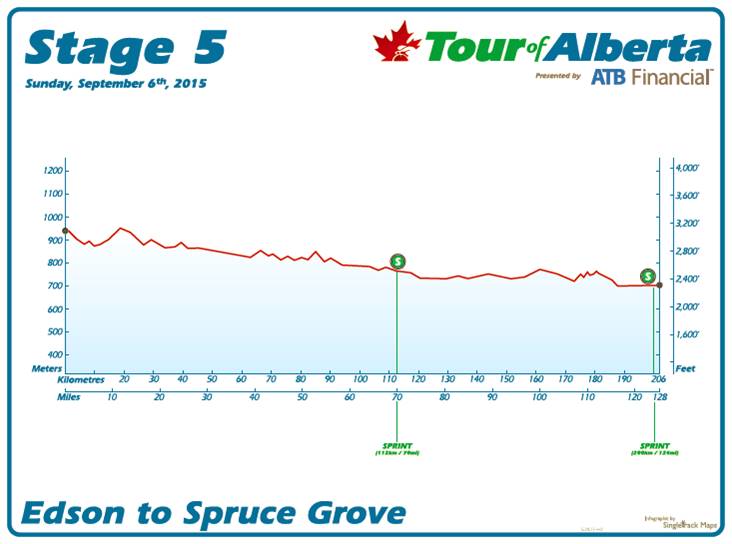 The TOA returns to the capitol city for the third year in a row and to the same circuit that closed the 2014 edition. “I’m a big believer in that circuit,” Corbett said. “I think it was a little disappointing to me last year, that we had to do that circuit in the rain because it didn’t let us see how dynamic of a circuit that can be. I think riders didn’t take the downhills and the corners as aggressively as they would have had it been dry. So, I’d like to give it another go and see how it plays out.” Corbett also said it’s a circuit on which anything can happen as it’s a pretty easy course for a break to stay out of sight of the main bunch. A group of escapees could stay away until the end. Last year’s winner, Daryl Impey of Orica-GreenEdge, took the overall win from Tom Dumoulin by one second. Unlike the final day of some Grand Tours, this isn’t a ceremonial stage. At the Tour of Alberta, it’s a race right to the end. 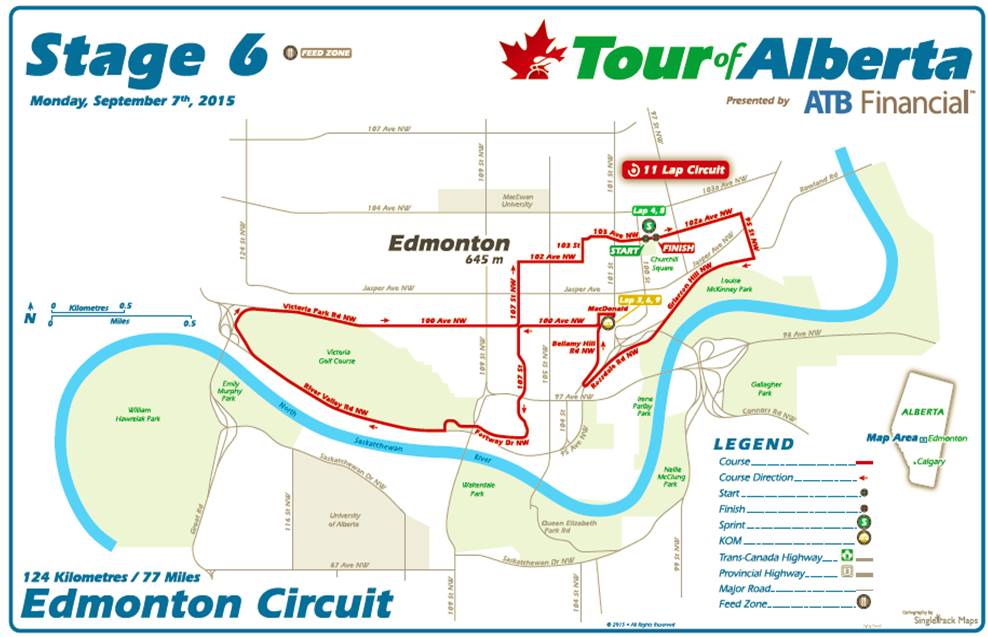 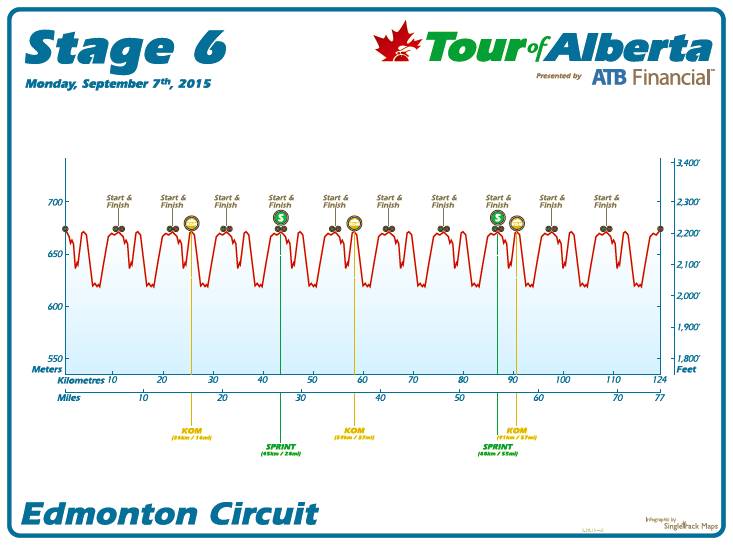