A British pro rider is getting in trouble online for pushing the limits of what types of exercise are allowed under U.K. lockdown orders.

While it is an extreme example, the blowback Skipper has faced for posting his ride is just one example of how the vague rules regarding what is acceptable exercise under COVID-19 restrictions is causing disputes, even between riders.

Technically, Skipper’s ride didn’t break any rules. The U.K.’s lockdown has various allowances for leaving one’s house, including taking “one form of exercise a day, for example, a run, walk, or cycle: alone or with members of your household.”

The duration and distance of Skipper’s outing did, however, push the limits of what counts as a reasonable form of exercise during a health emergency. The Internet was quick to respond, and point out that Skipper wasn’t exactly staying close to home.

My girlfriend is a doctor fighting it and she says it’s ok. Spoken to some of her colleagues as well who don’t have a problem. Maybe you need to understand the difference between when to social distance and when to isolate.

Skipper was steadfast in defending his ride. As he made clear in the resulting Twitter row, he was very careful to take proper precautions to prevent potential transmission on his ride. He also consulted with several health professionals before hitting the road, one of whom happens to be his wife.

With no definitive limits on exercise currently in place, it is up to us individually to determine what is acceptable, and what is excessive or socially irresponsible. 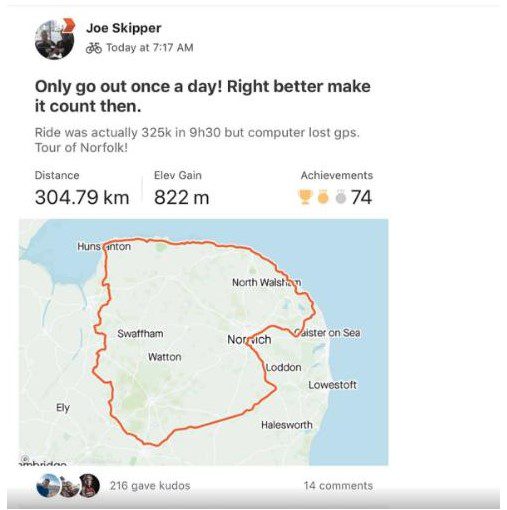 What are the acceptable limits of exercise under COVID-19 restrictions?

The controversy surrounding Skipper’s ride highlights the lack of clear boundaries for what counts as an acceptable form of exercise while under COVID-19 restrictions. What is allowed varies by region. France and Spain have very strictly limited exercise, including a ban on cycling.

Canada, like the U.K., still allows and encourages citizens to go outside for exercise daily. Neither government has specified what is or is not allowed beyond the vague recommendation to stay close to home.

That lack of clarity is starting to cause controversy online. Occasionally this has spilled over into real-life conflict.

Everyone will have a different idea of what is considered reasonable. Skipper’s ride is far beyond what most of us would consider a regular ride. But, for an elite professional Ironman triathlete – or professional cyclist – it’s not really that far outside of the ordinary.

Several WorldTour pros have logged serious rides recently, without the same blowback Skipper faced. Others have had more serious reactions while out on the roads. A Lotto-Soudal was even assaulted while on a training ride.