Travel Oregon created their Seven Wonders of Oregon to both celebrate the incredible diversity within its landscapes and to put an experiential twist on recreational tourism in the state.

On Wednesday, they took it a step further, releasing seven unique bikes for their seven wonders during a special media launch at the Chris King Precision Component factory in Portland, Oregon.

“In Oregon, we make and do cool stuff,” said Lisa Itel from Travel Oregon. “It’s showing the world how many cool things we have going on in Oregon. Biking is one of our two biggest niches, so we wanted to connect it with the seven wonders.”

All told, seven boutique bike builders were asked to draw inspiration from a single natural wonder and create a bike that would help connect its rider to the place. The results were visually stunning, but only seven cyclists will be lucky enough to discover how they ride. Before you find out how to win a 7 Wonders of Oregon bike, let’s take a closer look at each one.

7 Bikes for 7 Wonders of Oregon

Fred Cuthbert of Wolfhound Cycles loves building single speed bikes because that’s what he rides, but the signature design element of his custom frame is smooth curvature throughout.

“It’s not hydraulics,” admits Cuthbert. “It’s all hand cranks, so it’s nearly impossible for me to build two identical bikes, even if you ordered them at the same moment.”

For the Mt Hood Bike, Cuthbert wanted to design a bike that would be equally at home at the gravity-fueled bike park as it would be on the area’s many backcountry singletracks. The solution was a long-travel single speed hard tail with a dropper seat post. 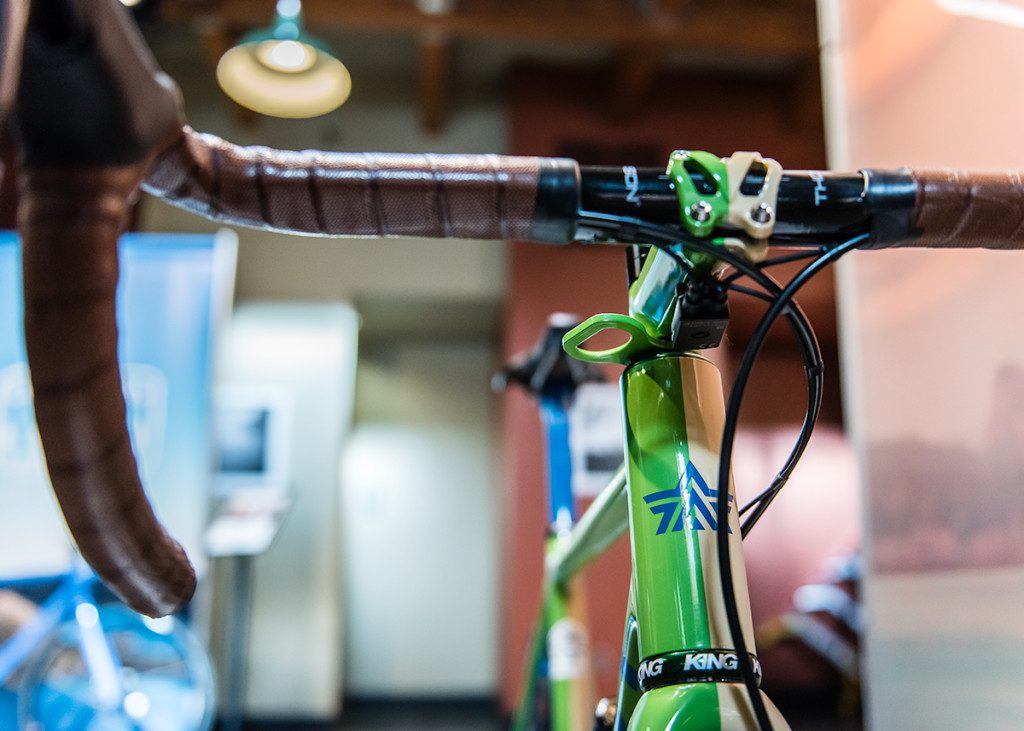 The back roads between The Dalles and Hood River go from Oregon’s dusty high country to its lush green river valleys, and Argonaut Cycles’ builder Ben Farver had a particularly inspiring ride through this region as he planned out the aesthetics of his bike.

“There are some gravel roads you can take a detour along the way,” said Farver, “so I wanted a straight forward road bike with tires and brakes that’ll handle the occasional gravel grind.” 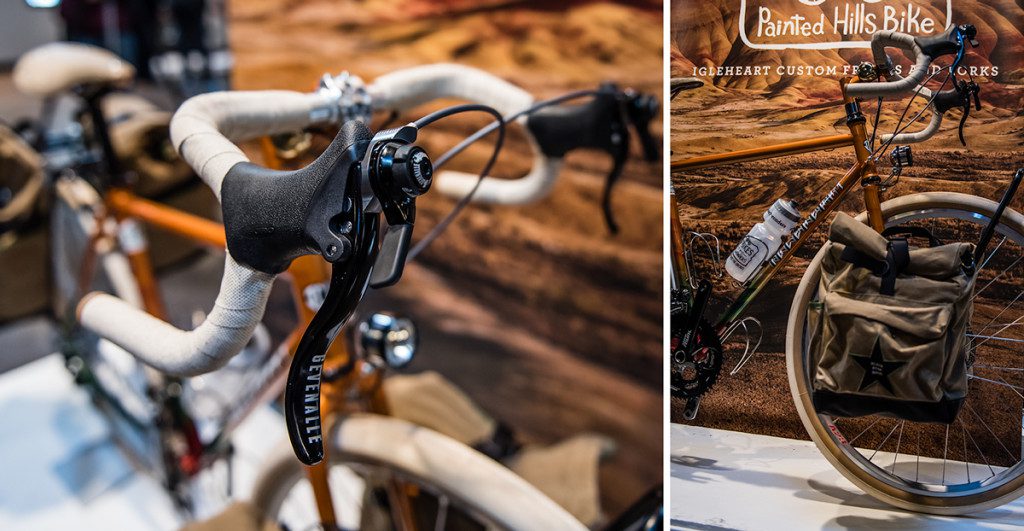 Christopher Igleheart, from Igleheart Frame, took the adventurous nature of the Painted Hills to heart with his design. Matched with a custom set of panniers, 2.0” rubber, and a custom fishing rod holder, his build is up for anything from a weekend to a lifetime.

“The paint job was the hardest part,” said Igleheart. “There are seven colours hidden in there to represent the geography of the Painted hills.” 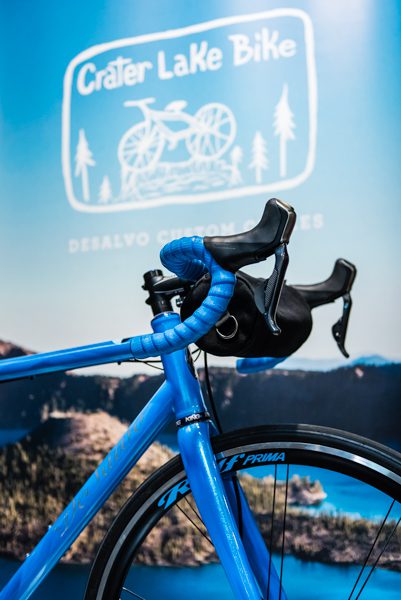 Grabbing inspiration from what’s likely Oregon’s most famous landmark wasn’t difficult, but Desalvo Custom Cycles designer Mike Desalvo took it a step further, building a bike that not only did the ride-the-rim route justice, but also stayed inherently local to Oregon as a whole.

“The roads aren’t great up there, but the scenery is,” says Desalvo. “I wanted the blue to match the water and I sourced as many parts from Oregon as possible. The wheels, hubs, bottom bracket, headset, and the handlebar bag are all made right here.” 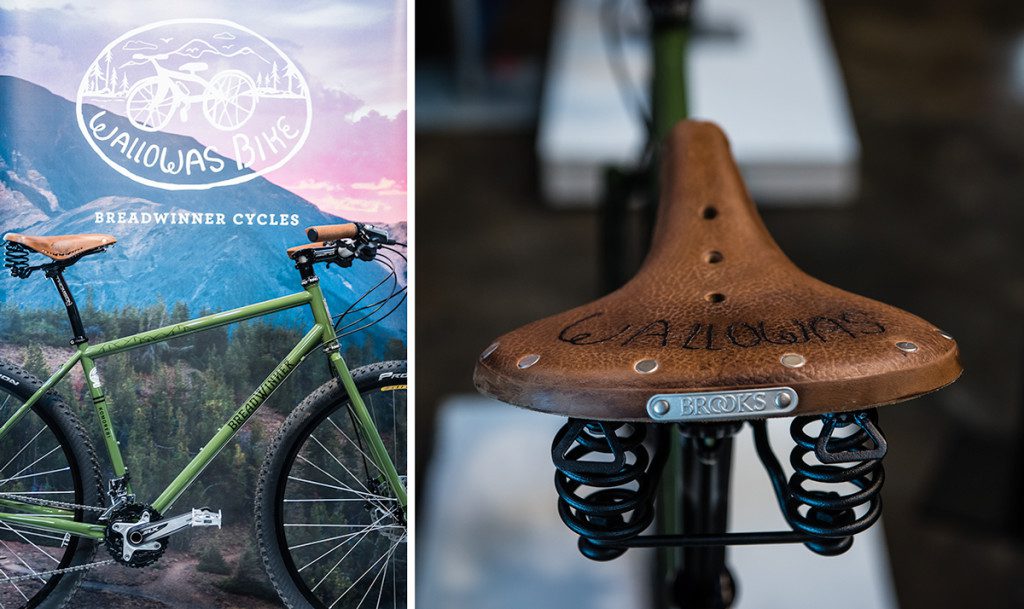 Tucked away in northeast Oregon, the Wallowas are known – to the few that know the area anyway – as the Alps of Oregon. Ira Ryan and Tony Pereira – the duo behind Breadwinner Cycles – put a twist on their traditional mountain bike design to create a one-of-a-kind bikepacking bike.

“We both have a lot to offer in terms of design and styles of riding,” said Ryan. “This bike is for bikepacking. We kept it simple, with long chain stays and a rigid fork that isn’t suspension corrected.”

Vulture Cycles’ Wade Beauchamp loves to ride his bike in Smith Rock, but he knows the area is best known for its rock climbing community.

“My vision was to incorporate the climbing scene,” says Beauchamp, “I made the handlebar grips from climbing rope and included a climbing bag on the handlebars to help haul gear.”

Joseph Ahearne, from Ahearne Cycles, knows the coast is about lifestyle as much as it’s about cycling, so he built the ultimate beach bike.

“I’ve built one of these for myself,” admits Ahearne, “and I’ve got a rear rack for it that I’ve used to do overnight trips.”

The front rack comes included with the bike, designed to carry matching flasks on the fork and a 12-pack of Oregon craft beer up front.

More about the 7 Bikes for 7 Wonders of Oregon

Travel Oregon wasn’t content to simply commission seven bikes to match the state’s iconic landscapes. They’re also going to encourage visitors and locals to get out and explore all seven wonders in depth, as these bikes will be hidden in their respective region for a lucky cyclist to find.