The long, cold months of winter and the holiday season can torpedo your diet with an onslaught of calorie-laden foods. When paired with more sporadic workouts, too many poor food choices can easily lead to the weight gain that will make your spring riding more lethargic than energized. But winter hibernation doesn’t have to be an express ticket to pudgeville. The key is to implement these research-proven dietary tricks to make sure you stay at your race weight straight through to asparagus season.

Load up on protein at breakfast

Colonized by items such as toast and cereal, breakfast is notoriously a carb-centric meal for cyclists. But research suggests seeking out some protein during your morning repast can help keep your hand out of the cookie jar. A recent study in the American Journal of Clinical Nutrition found that subjects who took in a high protein breakfast (35 g protein) experienced less hunger throughout the day and snacked on fewer high-fat foods in the evening than those who took in the same number of breakfast calories but fewer of them from protein (13 g protein). Why? Protein raises appetite-suppressing hormones making it more satiating than carbs, which helps stymie overeating.

It’s time to get back in the kitchen. Eschewing home cooking for restaurant fare not only drains your pocketbook, it can be hazardous to your waistline. A University of Texas study found that people scarfed down up to 253 more calories and an extra 16 g of fat on the days they ate out. By prepping your own meals you can sidestep sneaky restaurant calories (merci, butter and cream), improve portion control and have a better chance to pack meals and snacks with nutrient-dense whole foods.

Game plan Plan your meals and snacks in advance by creating a weekly menu so you’re less inclined to eat out or dial for calorie-bomb pizza when in a pinch. To get excited about cooking again, try embracing seasonal foods and dishes such as winter squash and hearty bowls of chili and visiting visual potluck websites such as tastespotting.com. 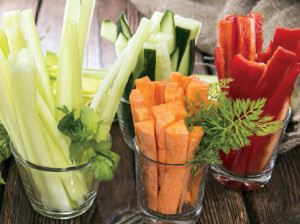 Think of dietary fibre as the yellow jersey wearer when it comes to the race to win the battle of the bulge. Studies show that high-fibre diets can help keep the flab monster at bay by improving appetite control and blood sugar levels. It largely accomplishes these tasks by slowing down digestion, which works to quell hunger pangs and slow the release of sugars into your bloodstream. The recommended daily intake of fibre for men and women is 38 and 25 g, respectively. Dietary surveys suggest most Canadians are only getting half of what they need.

Game plan To prevent packing on winter insulation, start prioritizing higher fibre foods during your meals and snacks. These include beans, lentils, vegetables, fruits, nuts, seeds and, of course, whole grains instead of their fibre poor refined counterparts.

Some old dietary tricks really do work. A study in the American Journal of Preventive Medicine found that people who kept a daily food journal shed twice as much weight during a six-month period than their non-journaling counterparts. The most powerful effects of writing down everything you eat and drink is accountability and increased awareness of where unnecessary, nutritionally poor calories are coming from. Food journals can also help target areas for improvement such as late-night snacking. Game plan To obtain a better sense of your eating habits, try writing down everything you eat and drink for a couple of weeks. It’s best to use measuring cups, measuring spoons and food scales as most people underestimate how much food they’re serving themselves. (Hello, Mr. Boxed Cereal.) From this practice, you can pinpoint any eating shortfalls that could be leading to weight gain or poor riding performance.

Keep up the pace

Here’s another good reason not to let your riding come to a halt during the winter months. A study in a 2014 American Journal of Clinical Nutrition article featured MRI brain scans performed on subjects following high-intensity exercise. Researchers found that the parts of the brain that control appetite became more active when viewing low-calorie foods than when viewing high-calorie fare following the workouts. So exercise can help make greasy pizza or chocolate cake less of a tempting option. Other research shows that vigorous exercise does a better job at suppressing the hunger-stimulating hormone ghrelin than does more moderate paced activity.

Game plan To burn a ton of calories and to help quell junk-food cravings, be sure to schedule regular bouts of high-paced workouts into your winter training program. These workouts can include interval sessions on a bike trainer or plyometric workouts at the gym.

While you don’t need to send your oven on a permanent vacation, your waistline can benefit from more foods that haven’t been cooked. A watershed study by Harvard scientists found that cooking can increase the amount of calories we absorb from food. It’s thought that cooking makes digestion easier so we don’t expend as much energy during the digestive process, thereby allowing more calories from the food to be absorbed. The upshot is that the number of calories gleaned from raw broccoli and steak tartare could very well be less than that from the same weight of boiled broccoli and grilled steak. Many raw foods also require extra chewing, which contributes to satiety.

Game plan Look for ways to bolster your meals and snacks with more raw edibles. Snack on raw nuts and baby carrots between meals. Replace flour tortillas with lettuce or collard leaves when making tacos or sandwich wraps. Prepare pasta al dente and mix raw veggies, such as broccoli, into the sauce. Add raw berries to your morning oatmeal and include plenty of raw vegetables in your dinner salad. Even vegetables that are typically cooked, such as beets and butternut squash, can be delicious when grated or thinly shaved.

Scarfers beware: research shows that eating meals and snacks on hyperdrive could hinder slim-down efforts. A 2014 study in the Journal of the Academy of Nutrition and Dietetics found that people who ate a lunch meal in nine minutes took in an average of 88 more calories—and felt less full an hour afterwards—than those who enjoyed their meal at a more leisurely pace of 22 minutes. Pacing yourself gives your brain a chance to register satiety signals, so you’re less likely to overeat during meals and snack needlessly between them.

Game plan To slow your noshing speed—and potentially whittle your waistline—implement eating strategies that force you to eat at a pace more fitting of Marcel Kittel on a Pyrenees climb than that of Vincenzo Nibali. Try taking smaller bites, putting down your utensils after each bite, and then chewing your food thoroughly. Breaking out the chopsticks or eating with your nondominant hand can also do wonders in prolonging mealtime.