After a big day on Tuesday with three medals including one gold, the U.S.A. tied the Netherlands on medal count Thursday at Yorkshire 2019, as Quinn Simmons won the World Championships’ first road race, the Junior men’s, and compatriot Magnus Sheffield nabbed the bronze. Simmons is the first American to win the Junior road race since 1991. The captivating contest was run at a gallop on wet roads.

The riders had 148.1 km to negotiate from Richmond to Harrowgate, with three finishing circuits, each with a modest climb called Harlow Moor Road. Along the way, as they scampered over hill and dale, they would pass through Blubberhouse. 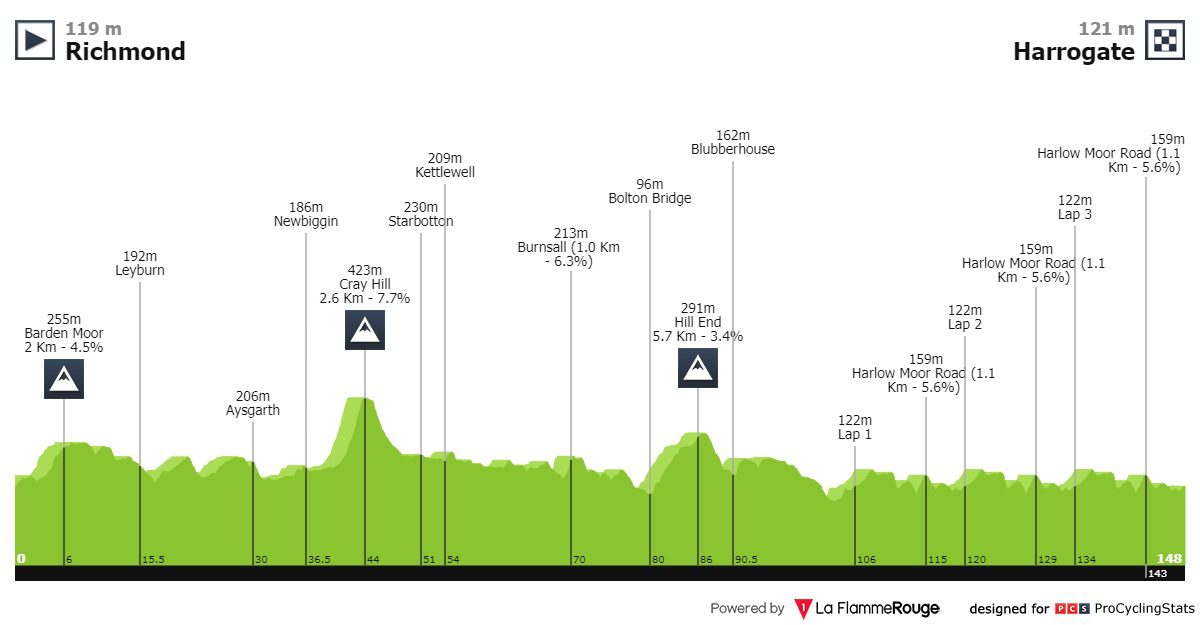 The scenery was straight-up bucolic.

After a quintet of fugitives were brought to heel by the efforts of the U.S.A., Brit Max Walker skipped away. A plague of crashes before the Summerset scales, combined with the American pressure, led to a streamlining of the peloton to 40 riders with 61 km to go. All four Canadians were far back.

Two riders from the U.S.A. were in the next breakaway with a Brit, a Czech and a Spaniard. The Brits blocked while the Italians and Germans chased.

These five riders have pulled clear at the front as we make the approach into Harrogate.

The quintet started the circuits with a 37-second gap over the disorganized chase. The Italians tried desperately to cut the deficit. Speaking of desperation, a Dutch rider cut out to find a bathroom, effectively ending his race.

#Yorkshire2019 – Casper Van Uden did a Dumoulin, stops the bike and walked into a bar. pic.twitter.com/C7pzbhFHlS

With the peloton making inroads into the gap, Simmons, who was fourth in Monday’s time trial, bolted on his breakmates with 33-km remaining and led a 20-strong chase by 39-seconds going into Lap 2. Italian Alessio Martinelli attacked but was still 36-seconds behind by the time he heard the bell.

The beaded Simmons had time to drape the Stars and Stripes around his neck. Martinelli deserved the silver. Four riders scrapped it out for bronze, with Magnus Sheffield giving the U.S.A. a dream race.