An Edmonton museum is asking for help to save and restore a piece of the cities cycling history. The iconic “bike guy” neon sign has been in place on the rooftop of Western Cycle for decades.

That building scheduled for demolition later this summer. The Alberta Sign Association (ASA) is on a deadline to remove the sign before that happens. It will then restore the sign and move it to its new location in the Edmonton Neon Sign Museum.

Saving the sign, it turns out, is more complicated than a simple re-location. 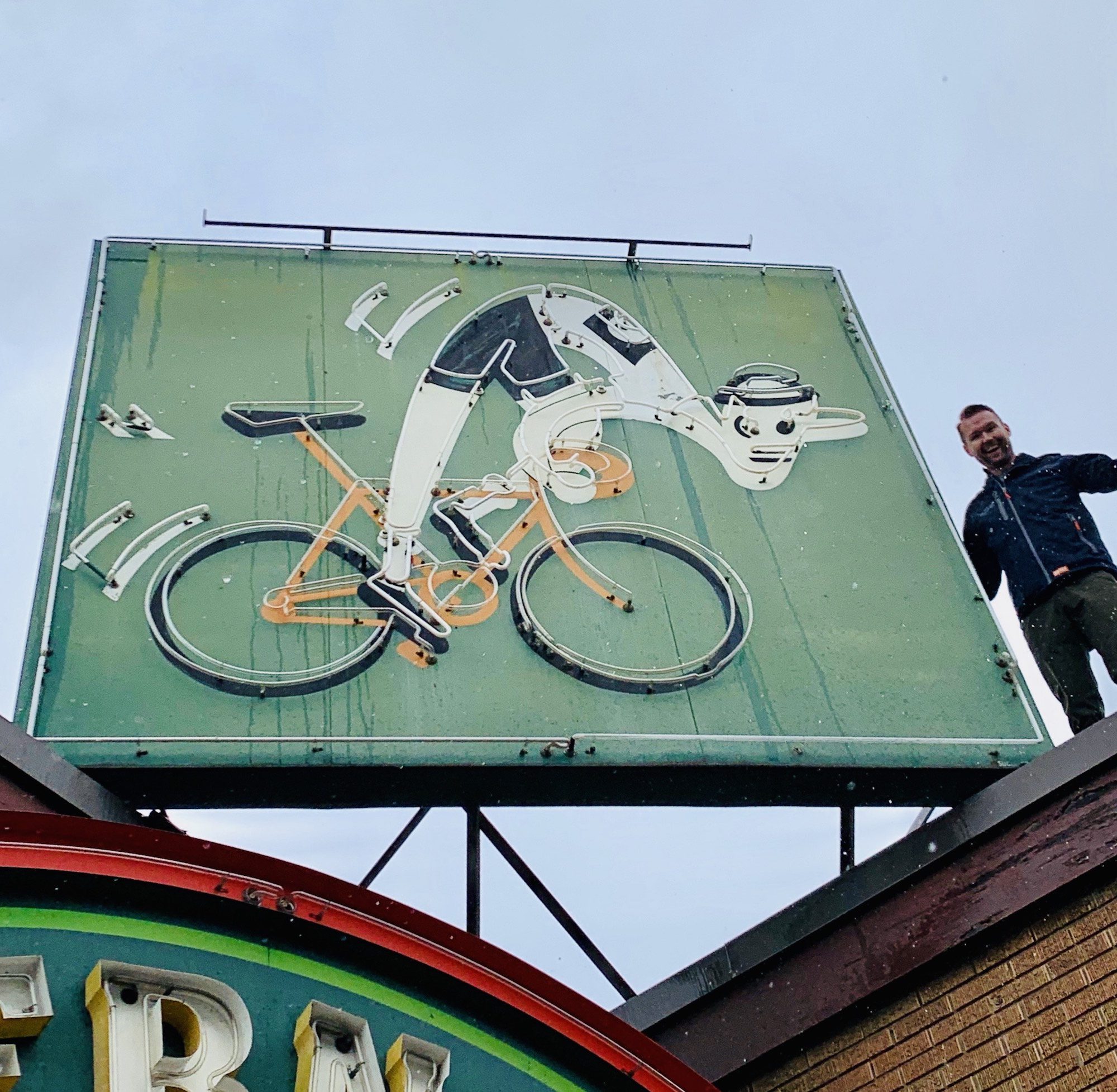 Saving the Bike Guy faces several bumps in the road

The signs substantial 10 foot by 10 foot size and rooftop location are one obstacle. Bike Guy’s state of disrepair also makes it more difficult than the museum’s other projects. Kelso Brennan, President of the ASA, says its the added complexity that’s led to the group’s first request for public support.

“For this particular restoration, the cyclist will need new electrical components (internal workings), new neon glass bending and paint,” Brennan said over e-mail. Difficulties with the neon sign go beyond a more complex restoration process, though. “The costs involved which have made this project more challenging than usual relate to the major traffic artery’s where the sign is currently located.”  Western Cycle occupied the building at the corner of 104 and 124 Street for 85 years, with the neon sign lighting up many of those decades. To remove the sign, two lanes of traffic will have to be closed. This makes room for a crane to come in and lift the sign off the building’s rooftop.

Once it is removed and repaired the neon sign will be installed at the Edmonton Neon Sign Museum.

“The real challenge of why we need the public’s support is the new proposed location and installation atop The Mercer building at 104at and 104ave,” Brennan says. “Structural engineering and wind load testing will be required, which could potentially require a brand new steel mounting frame.” Another, larger crane will then lift the sign onto a new rooftop location above The Mercer building.

The rooftop “bike guy” isn’t the only neon sign the ASA is hoping to save from the Western Cycle building.

“Our goal is to save 4 signs off the building which including the top Cyclist, the Western Cycle awning and Archway over the entrance, and two sets of letters off each end of the building,” says Brennan of the ASA’s plans.

The entire project, from removal and restoration to installation, is expected to cost $25,000. Much of that cost will be in the form of volunteer donations by local sign companies. The scale of this project has exceeded the ASA’s usual budget for projects.

“All of the physical Neon Signs in the museum are donated and come in varying states of disrepair when we rescue them,” says Brennan. “The neon glass is often smashed, the metal is sometimes very rusted, and in some cases, the signs are actually completely rebuilt from scratch using brand new materials. All of the labour, time and materials is volunteer work by local Edmonton sign companies and members of the ASA.”

The City of Edmonton currently provides the ASA with a modest annual maintenance budget to maintain and repair electric units and neon tubes, but does not pay for the restoration. Telus and The Mercer donate all the electrical power for all of the signs once installed at the museum.

The ASA, in partnership with the City of Edmonton Heritage Planning Department, finds and restores neon signs with historical significance to Edmonton and the surrounding areas.

The City of Edmonton currently owns the sign, as well as the Edmonton Neon Sign Museum that the sign will be donated to. The building itself was purchased by the city as part of a plan to expand Edmonton’s LRT system.

Western Cycle was established in 1934. The store moved to its final location several decades later. It closed in September 2019 when the city purchased the building.

Edmonton has lost a long-standing staple of the cycling community with Western Cycle’s closure. ASA is hoping it can do its part to preserve the long-standing store’s iconic sign for years to come.

Donations to support the ASA’s efforts to preserve the Western Cycle neon signs can be made through the Association’s GoFundMe campaign.