Recreational trails are escapes for millions of Canadians. In recent years, no network has been more prominent than the Great Trail which garnered lots of attention when it neared full connection across Canada though work continues to improve sections of it. Despite its designation as part of the Great Trail, a 67-km section of a former rail line between Castlegar and Christina Lake, B.C. is at jeopardy of becoming a road. 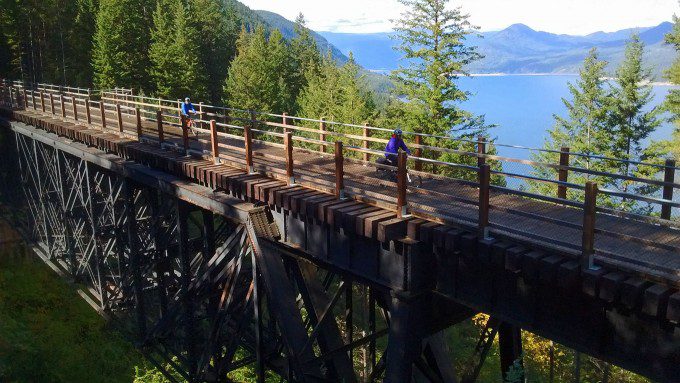 Recreational groups are critical of the plan to open up the section of the Great Trail to vehicle traffic. The Ministry of Forests and Lands has submitted a plan for public consultation to cancel the trail designation so it can be turned into a road between Castlegar and Christina Lake in southeastern, B.C.

The ministry defended the proposal saying it reflects how people are already using the trail. “There is significant use of the rail grade by on-highway vehicles by both the public and industry. The proposed change reflects local interests and supports access for industrial activity,” wrote John Hawking’s the director of Recreation Sites and Trails B.C. in a letter adding that there are already parts of the Great Trail that are roads.

Recreational groups remain critical of the proposal and hope to keep it a recreational space.

“Turning this rail-trail into a road is a step backward for the many B.C. residents who enjoy cycling, walking and rolling for recreation,” said Ciel Sander, board president of the Trails Society of B.C. to CBC.

“Already residents are having difficulty finding high-quality hiking trails in B.C. They instead are often flying to Europe, the U.S.A. or other provinces for their cycling holidays.”

The proposed section that could lose its designation winds its way above Arrow Lake before turning west towards Christina Lake. According to CBC, the trail is raised with rebuilt trestles and a kilometre long Bulldog Tunnel. People in the area already say locals bring off-road vehicles, motorbikes, cars and trucks onto the trial even though they aren’t allowed.

“The trail has been overrun with motorized vehicles destroying the surface, making dangerous and difficult to cycle and walk on. People have been gaining off-road vehicle access to these rail-trails in addition to driving trucks and cars, displacing active trail users,” says Sander.

The Great Trail is also not ready to fully support the change. “Cyclists and hikers will have to be on high alert when they use the trail and that is not an experience we believe is appropriate or pleasant for anyone,” explained Jeremie Gabourg, vice-president of communications for The Great Trail to CBC.

The issue will continue to be open to public comment until Aug. 26.