Big day for Canadian’s at Mont-Sainte-Anne – with four women finishing inside the top-20 in a thrilling elite women’s cross country race.

The legendary Canadian course has continued to deliver exciting racing all week, and the elite women’s event was no exception. Over six laps, there was multiple lead changes, and a front group that rarely stayed consistent from lap to lap.

Emily Batty was the top Canadian finisher in the race, carried forward from the third row by the cheers of a massive home country crowd.

“There were some spots on the course where I couldn’t even hear – my ears were ringing. It was so intense,”  Batty said after the race, clearly appreciative of the course side support. “I just want to say a true ‘Thank you’ to everyone that came out, we’re just so proud that this big of a turn out came out and showed up for world championships.”

Haley Smith started on the front for Canada, leading through the start loop and onto the first full lap.

“I wanted to have a good start, but I definitely had some adrenaline, nervous watts on the start loop,” Smith said of her early speed. “I accidentally led the first three or four minutes which maybe wasn’t the smartest, but it was a really cool experience.”

“I did go backwards a bit after that, but I managed to claw my way back,” Smith added.

From there, Jolanda Neff made the first attack. The 2017 world champion looked eager to reclaim her rainbow stripes, and started setting the pace early.

Behind, a trio of Canadians were pushing into the top 10. Catharine Pendrel was the furthest forward, sitting fifth in a small chase group. Haley Smith was inside the top-10, with Emilly Batty looking to be back on form, and moving steadily forward in the field. Slightly further back, Sandra Walter was making her way into the top-20

Neff’s lead didn’t last long, though. She was quickly caught, and then passed by Australia’s Rebecca McConnell.

Behind, Emily Batty had made her way into the top-10. Smith had momentarily dropped back as far as 14th, but would recover to move back to the front of their chase group.

While the early laps were full of action, Pauline Ferrand-Prevot quickly started writing her name all over the second half of the race. The multi-talented French rider first caught and passed Neff, then chased town McConnell to take over at the front of the race. Ferrand-Prevot established a lead on the third of six laps, and never looked back. She set the fastest time on four of the six laps. Possibly, because she thought she race was one lap closer to the finish than reality.

However the mix-up occurred, Ferrand-Prevot, upon realizing there was still another lap remaining, thought her chances of returning to the rainbow jersey were over. Added to a crash in the start loop that saw her drop time and places to the leaders, it was an eventful race for the French rider, and a hard way to earn her world champion stripes.

A crash and miscounted lap are small matters compared to the multi-discipline world champions trials over the last four years. After struggling with a mysterious problem, she finally had surgery in the off-season to correct a problem with her knee.

If there was a track to make her comeback on, however, it was Mont-Sainte-Anne. Ferrand-Prevot earned a junior world championship here back in 2010.

On the final lap, Ferrand-Prevot lost time, but not enough to lose the gold medal. The French rider crossed the line alone in front to reclaim her XCO mountain bike world champion title.

Behind the leader, Neff had overtaken McConnell, and was clinging to a silver medal. She had recovered from her early efforts, and set the fastest time on the final lap. While not a world championship title, Neff was happy with silver at the finish line.

“I really didn’t expect to finish on the podium today,” said Neff, “It’s a huge success for me to win silver today. Pauline was really strong, she deserves the win.”

While her medal may have been unexpected, it came at a venue where she has had much success in the past. In fact, Neff gave the course some credit for her win.

“I think this is the best track in the world for me, I think it’s the only reason I could win a medal today,” the Swiss rider said after the race. “I think it’s the most natural circuit we have on the whole World Cup calendar. I think you really need to be a complete mountain biker to do well here.”

Behind, McConnell was doing everything she could to hold on to third place.

“It was super tough. In the later part of the race I was really starting to suffer,” said the Australian, whose strength is normally in short track racing. “I could barely turn the pedals over on the last lap.”

After sitting out much of the prior season, McConnell was more than happy with third place, despite leading in the early laps.

“How could you ever be disappointed with third place at a world championships,” said McConnell, “I’m over the moon.”

By moving up steadily all race, Emily Batty pushed hard on the final laps to take ninth at Mont-Sainte-Anne. After wildly successful season in 2018, it was the Canadian national champions best international result so far this year.

“I’m excited to leave the season on a much better note, and hopefully put the first half of the season behind me,” said Batty after the race, already looking forward to next season. “It’s time to put the focus back on Tokyo, where I feel I belong.”

Smith crossed the line next for Canada, putting in a huge dig in on the final lap to finish in 12th.

“This is a challenging course for me, to be honest I’m scared of it all the time, and I made a few significant technical errors that required me to run, but mostly I rode well,” Smith said after the race.

“To have people chanting “Haley Haley” on the side of the course and screaming Go Canada – that was a very special experience and no matter what place I finished I’m going to remember today for a long time.”

Two riders later, it was Catharine Pendrel who added another top-15 finish for the home team. The two time world champion ended her world championships campaign in 14th.

One rider who has more experience at Mont-Sainte-Anne than most is Sandra Walter. The perpetually smiling Coquitliam, B.C. racer first raced here in 1998, where she finished 15th in the junior women’s event. While Walter knows the track well, she said she had no expectations going into the race.

“This place is really special for me, it was my first world championship, and my first time representing Canada,” said Walter. “I placed fifteenth there, with no expectations, so I just wanted to bring that same feeling of joy, pride, and just no expectation. I think it worked out really well today.”

“It’s my best result in elite,” said Walter, “The crowds were really amazing and I just want to thank everyone for their support.”

“In ’98 when I was here, it was my first time being exposed to that level of racing. It really fueled my passion for the sport and made me realize what I could do with it,” Walter added, thinking back to her first race at Sainte-Anne. “20 years later here I am still improving and still loving it as much as I ever did.”

Jennifer Jackson was the next Canadian finisher at Sainte-Anne, in 32nd. Cindy Montambault finished 43rd and Elyse Nieuwold 49th. 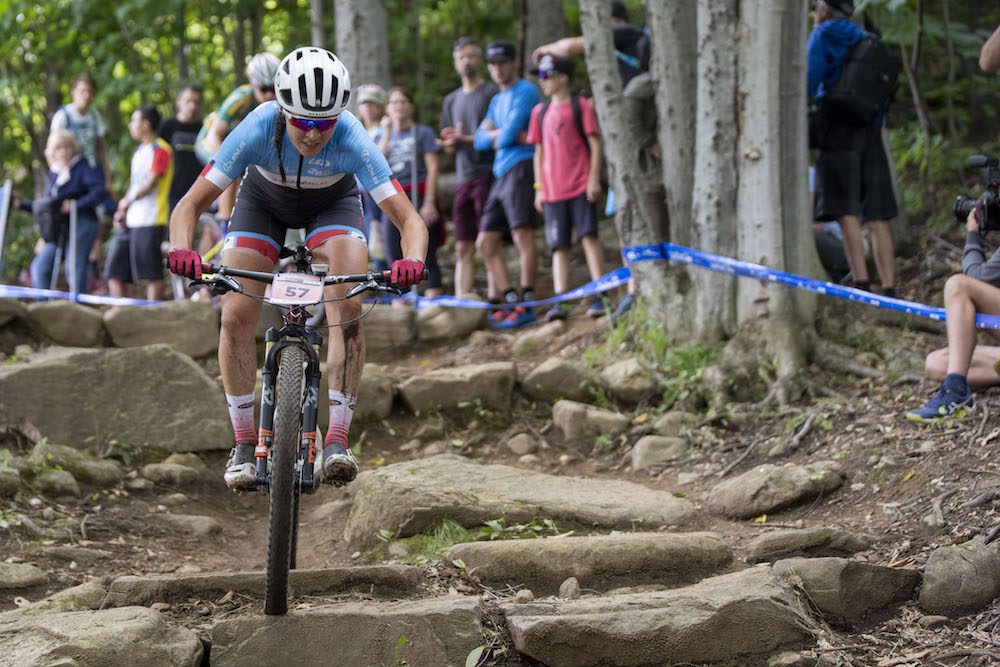 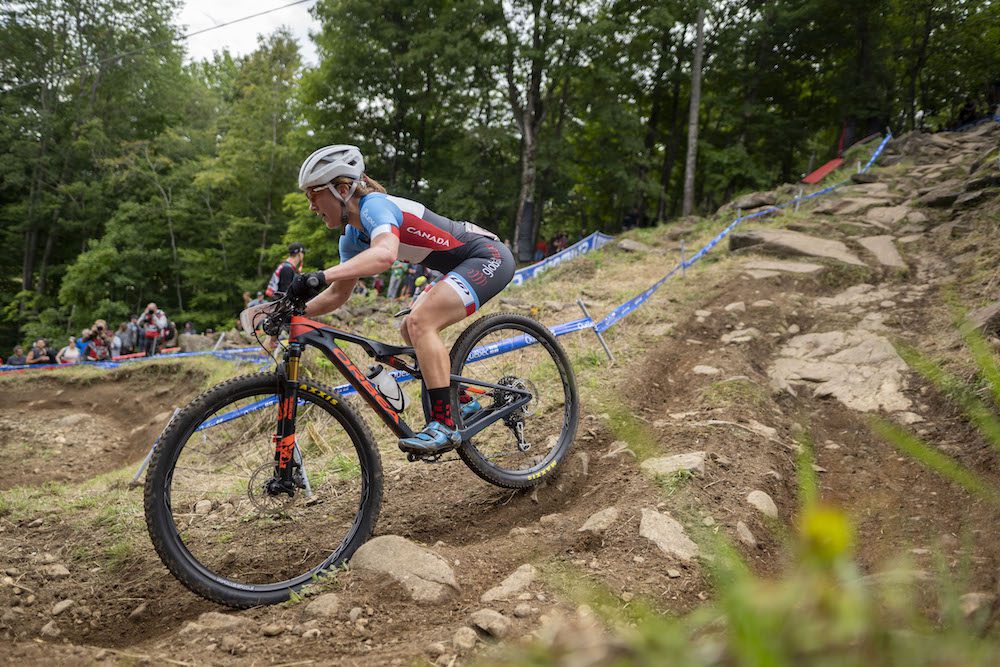 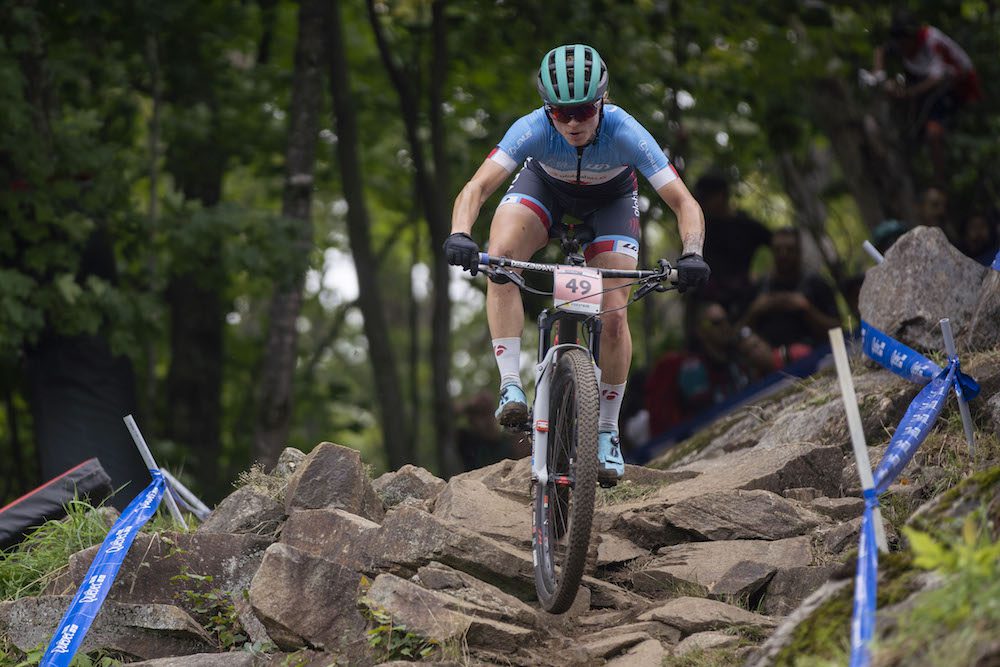 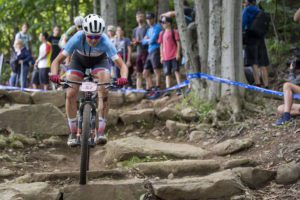 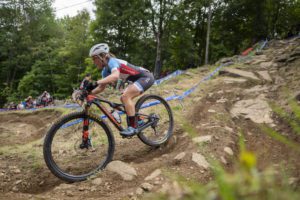 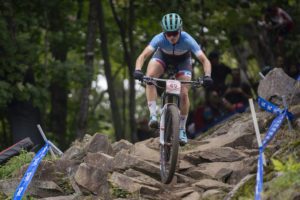