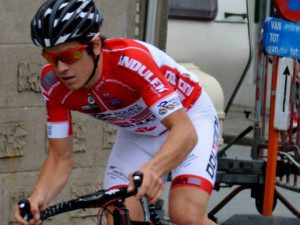 “All I cared about was having a group to ride back to town with,” said Benjamin Perry after winning the under-23 Canadian national men’s road race. Despite Perry’s nonchalance, he rode phenomenally well in the men’s National championship, in which both WorldTour pros and under-23 athletes ride the same course. Perry finished eighth among some of Canada’s most accomplished racers. Perry’s group that he was looking to ride back to town with was among the “big-hitters” as he aptly put it. Perry finished in the same group as Antoine Duchesne, Guillaume Boivin and Hugo Houle, who were chasing just behind the group of Ryan Roth, Mike Woods and Christian Meier. The same Christian Meier who is currently racing in the Tour de France. Perry is developing into a “big-hitter” himself.

Last week, Perry completed the Tour of Liege, a high-level amateur race in Belgium. “It’s such a great feeling to have the Canadian national champion’s jersey and to wear it with pride. Lots of people recognize it and congratulate me in the peloton. Even the biggest riders in there know what it means,” said Perry. He’s referring to his new Canadian national champion’s jersey that his team director designed especially for him a mere 24 hours after Perry won the title at the end of June. “My director is incredibly stoked on the whole jersey thing and he had it drawn up and sent in within 24 hours of my win. I asked for something simple, but with all the sponsors on the Baguet MIBA-Indulek jersey it’s got a super busy and a very Euro look to it.” In Europe, a national championship win is of great importance. Unlike many European nations where amateurs and professionals do not race in the same national championships, Canada’s under-23 champion is more or less given the title of “amateur national champion.” It’s a little bit of a grey area as Svein Tuft is currently wearing our national colours in the Tour de France; however depending on the race, Perry’s wearing of the jersey is appropriate. “I am able to wear it in most races, as Canada doesn’t have an amateur championship. Most organizers actually insist I wear it. However, we always make sure to ask before the races,” said Perry.

Beyond special jerseys and the subtleties of what they represent, Perry has some serious ambitions for the rest of the year. His goal is to place within the top-15 at the world under-23 road championships if he gains selection to the national team. It’s difficult to envision a squad at this year’s worlds without him in it. Nevertheless, his focus is to prove that his win in June was not a fluke. “As for goals, I’d like to be top-10 in all the four tours I race this summer in Belgium and win a stage or two,” said Perry.

Additionally, his sights are set on 2015 with several teams courting him for his services. “I have a handful of team offers, all either Belgian or American, continental and amateur. I have two tentative offers to be a stagiaire too but there is still some planning to be done if those are to come to fruition,” said Perry. “Regardless, I should end up somewhere nice next year. I’m now just trying to focus on my racing and training and let the variables I can’t control play themselves out.”

Perry’s goal this year was to literally “win win win.” He’s most certainly living up to his own expectations, while staying grounded and remaining focused on continuing to rake in top results.

Tour of Liege today was insane. Tried going across to big EB and finished around 20th. Saw @mathieuvdpoel get run over by a motorbike. #fou