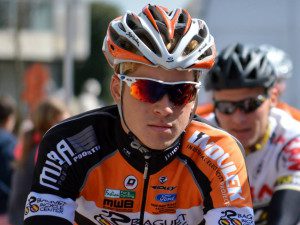 Despite being left to the proverbial wolves at the eleventh hour in October 2013 by his former squad, the Lotto-Belisol feeder team, Benjamin Perry was unfazed and forged onwards. His dream of becoming a professional bike racer continues. He managed to sign with a second-year team, Baguet-MIBA Poorten-Indulek based in Belgium. Despite the challenges, Perry seems understanding of his former squad’s decision. “It wasn’t until early October that they finally realized they didn’t have space for me any more,” said Perry. “I was left hanging but I can understand that their hands were tied. Management had already signed five juniors and only two riders from the team were called up to the World Tour, which was an unexpected all-time low,” said Perry upon reflection. Nonetheless, Perry seems to be thriving in his new kit and perhaps his new situation is a better fit. “My new team is focused on developing under-23 riders and it is a new addition to the highest league of amateur cycling in Belgium known as TopCompetition,” said Perry. That’s the exact opportunity any under-23 rider would want.

Racing is merciless in Belgium. Perry’s affinity to be in the game isn’t going unnoticed. The opportunity that he lost with Lotto-Belisol’s feeder program was quickly forgotten. When dust settled in time for 2014, former professional cyclist Serge Baguet, winner of Stage 17 of the 2001 Tour de France was his new manager.

As of now, Perry is beaming with confidence. His goal for the year is “win, win, win” whether it be for the Canadian under-23 men’s team or for his regular team. While his goals are lofty, they are completely where they need to be. This year, Perry has been a mainstay in the breakaways in some major TopCompetition races. The list of races in which he has been a protagonist includes the Omloop van de Braakmen, a race that features many of the climbs found in the Tour of Flanders. Perry also won a small race at the end of March. Although Perry said humbly that it was a small race, any win in Europe is a major achievement.

Perry has plans to return home to race the Tour de Saguenay and then the Canadian nationals with his home squad NCCH presented by DEC Express. This season will certainly be an eventful one for the upbeat Perry.