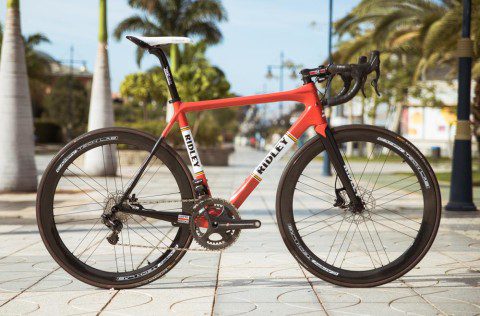 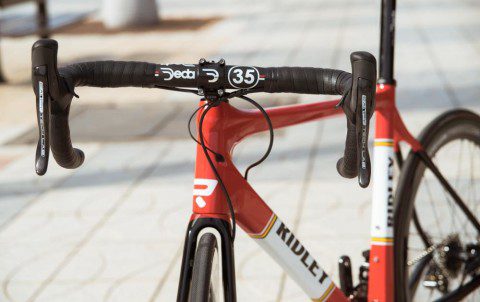 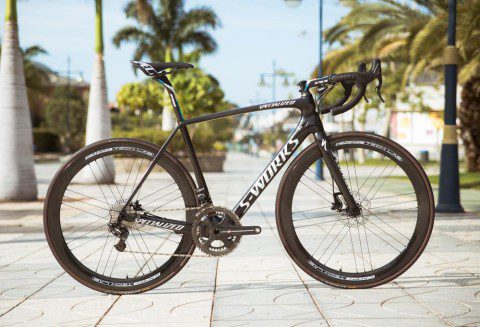 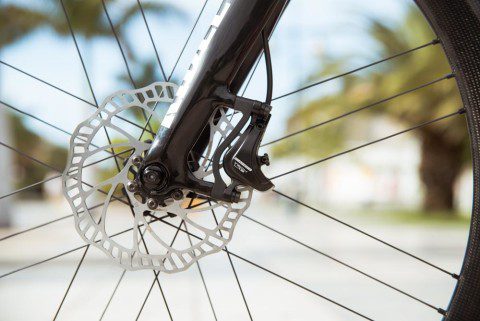 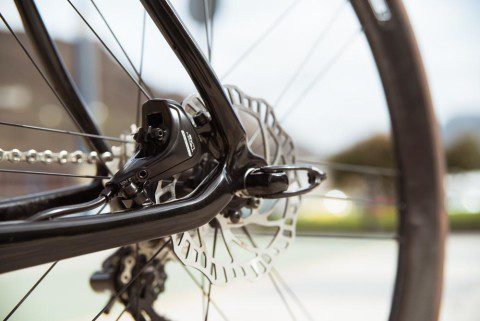 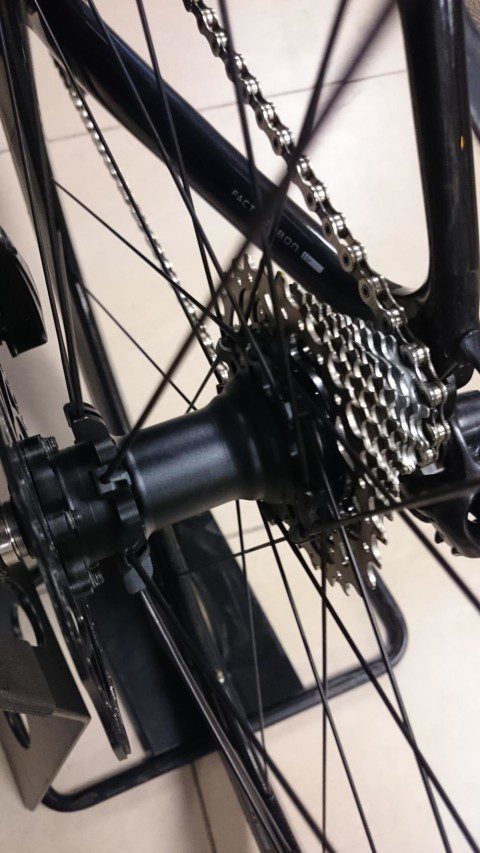 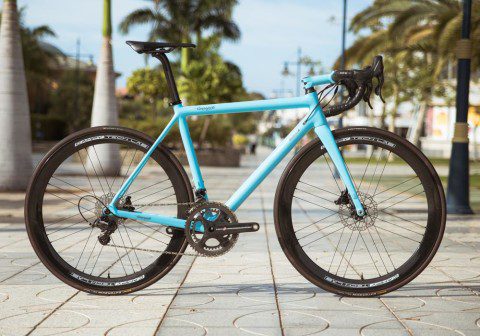 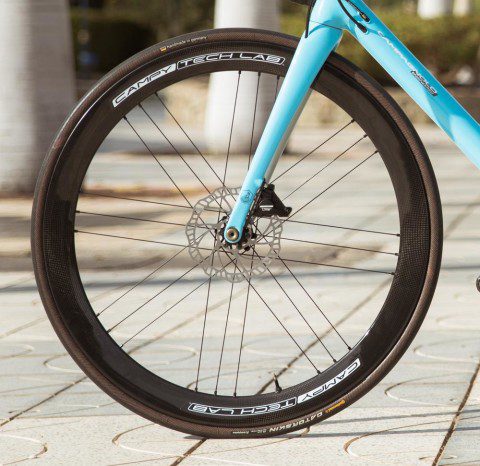 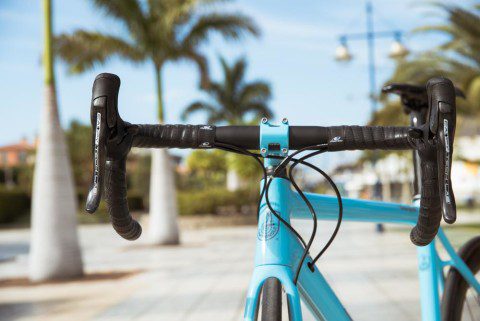 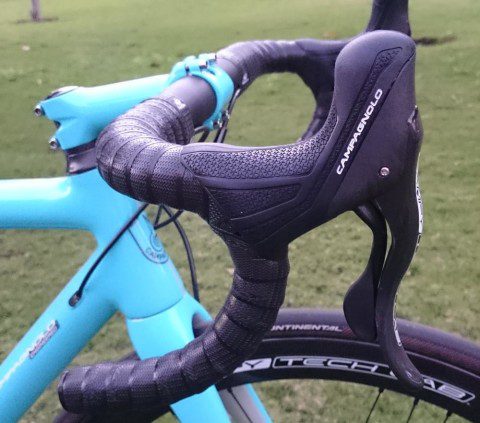 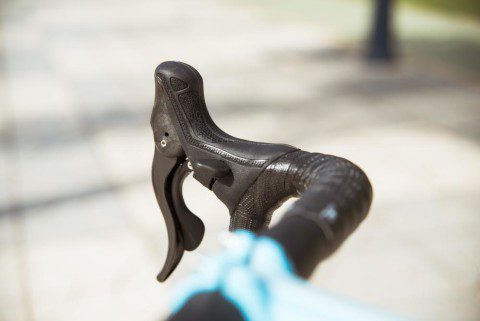 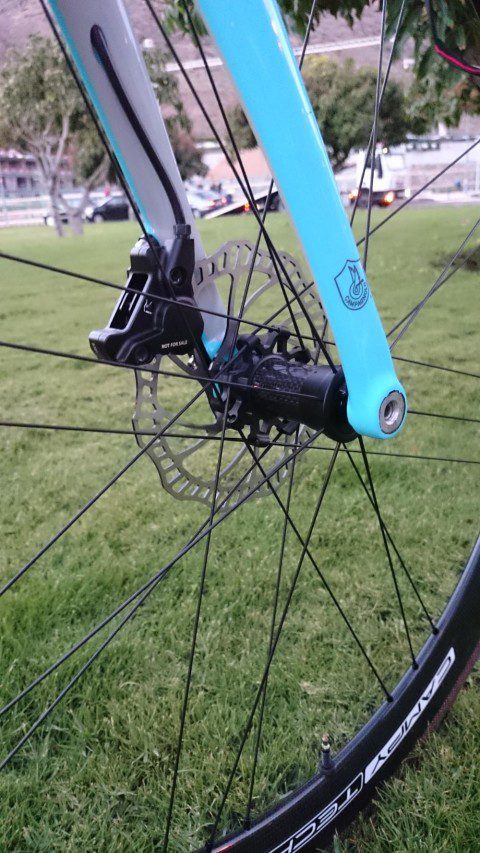 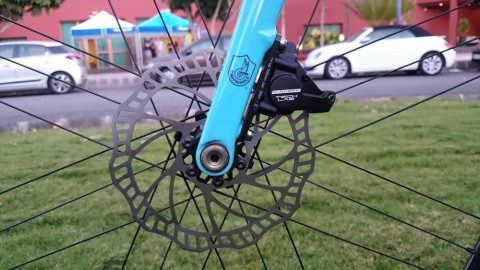 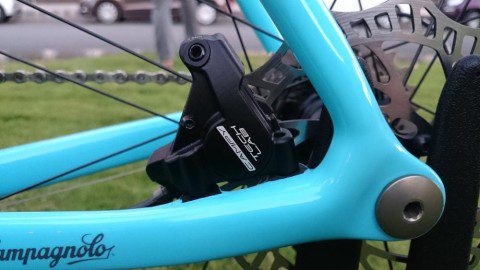 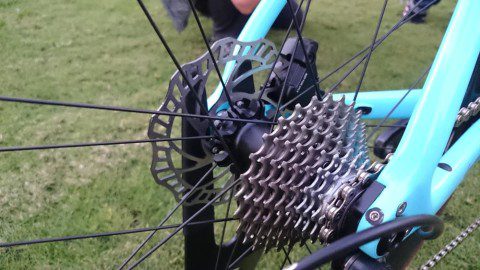 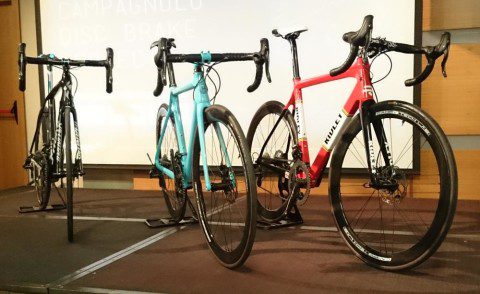 In a few weeks, you’ll start seeing Campagnolo disc brakes on the bikes of WorldTour teams. Unlike Shimano and SRAM, the high-end Italian component maker does not have a disc-brake system on the market. While riders from Movistar, Astana and Lotto-Soudal will take part in the UCI’s official test season of disc brakes, the new rotors, calipers, brake levers, hoods and even wheels won’t be available to you, yet.

At a recent Campagnolo press camp on Gran Canaria in the Canary Islands, the company revealed its disc-brake project, but did not allow any product testing. Lorenzo Taxis, Campagnolo marketing and communications director, and Joshua Riddle, press manager, presented three bikes—one representing each top-level team they work with—allowed photography, but would not field any questions about the Campagnolo disc-brake project. “This is not a product presentation,” Taxis said addressing the journalists assembled. “We are not willing to answer any technical questions. We are just willing to let you understand the process of development. There will be a correct time that will be close to the official launch to the market, where you will be called back in order to test those products. They are 90 per cent refined at this level. But since they are not a product that consumers will test, it’s not the proper time for you to test.”

Campagnolo’s development process is fastidious, almost to a fault. Take, for example, the company’s launch of its electronic-shifting system. EPS (Electronic Power Shift) debuted in November 2011, after Shimano released 10-speed Dura-Ace Di2 gruppo in 2007. Campy had the internal first release of its electronic groupset in 1992. The company was close to releasing EPS before Shimano premiered the road Di2, but the Italian company held back because of another one of its projects. “We took that extra time to develop EPS. It was a way to take care of our consumers, making those hard decisions that might signify fewer sales and less money in the coffers of Campagnolo. We had EPS ready before our competition, but we decided to release it later because we also had 11-speed mechanical coming out,” Riddle said. He stressed that had the company launched a 10-speed electronic group, it wouldn’t have released its products in good faith. Giving customers a 10-speed electric group, and then releasing an 11-speed mechanical group soon after would, in a sense, make the 10-speed EPS seem stale as an 11-speed EPS was sure to follow. “You’d like to have the latest and the greatest,” Riddle added, “so we said we’d bite the bullet, we’ll sit on that for a year and develop it for 11-speed, to be correct in the face of our consumers. It cost us money, but it was the right thing to do.”

Taxis drew more parallels between its EPS project and its work with disc-brakes. “Prior to the EPS introduction, Campagnolo used a whole season with Movistar team, using Campy Tech Lab components because we wanted to make sure those products, those components, never reached the market,” Taxis said. Like the electronic gruppo that was on Movistar bikes during the 2011 season, the new disc-brake set will be labelled Campy Tech Lab. You see this stamp on the new levers, calipers and rims of the new road-disc wheels. Campy Tech Lab is the name of the division of Campagnolo’s R&D department that works directly with top-tier teams. Taxis added that those test components often don’t make it to consumers because the parts don’t meet the company’s wider requirements.

So, are the pros riding sub-standard components? Are top riders guinea pigs for Campy’s customers? “We knew that disc brakes were coming, so this is a project that’s been going a long time,” Riddle said of the work that has taken place for at least 19 months. “We wouldn’t put something together hastily and put on the bikes that Vincenzo Nibali and Nairo Quintana use. The components are fully functional prototypes and they’ve been tested to the hilt.”

These fully functional prototypes reveal a hydraulic disc-brake system. The lever body is taller and wider than the Ergopower setup on either the EPS or new Potenza parts. You’ll recall SRAM HRD and Shimano’s R785 lever bodies are taller than their cable-actuated rim-brake siblings. They have to be to accommodate master cylinders. From EPS and top-tier mechanical groups, the new Campy lever bodies seem to take the inside hook-like shaping, although to a lesser degree. The disc-brake project hood patterns differ from bike to bike.

All the rotors seem light and airy. They’re affixed with a six-bolt system, as opposed to centre-lock. Each of the three bikes had a 160-mm diameter rotor on the front wheel and a 140-mm on the rear. The wheels, both front and rear, have Campy’s G3 Geometry—a lacing pattern that groups spokes together in groups of three. Traditionally, this pattern was only used on rear wheels with the two outside spokes running to the drive side and the centre spoke of each grouping running to the non-drive side. On the new front wheel, the disc side of the wheel get the higher spoke count. The wheels seem to draw heavily from the Bora line of wheels, especially the thin spokes and roughly 50-mm rim depth. The front wheels have carbon-fibre hub shells: the rear hub shells, aluminum.

On the Specialized Tarmac Disc and the Ridley Fenix Disc, representing the bikes that would be used by Astana and Lotto-Soudal, the wheels were affixed to dropouts with quick release. Those bikes were equipped with EPS Super Record groupsets. The third frame wasn’t a Canyon, the brand used by Movistar team. Canyon revealed its Ultimate CF SLX Disc at Eurobike this past August, but it’s not yet available. The stand-in-Canyon, a Sarto frame equipped with a Super Record mechanical group, seemed to match the features of the Ultimate CF SLX Disc, including thru-axles.

The Campy Tech Lab calipers on the Specialized and Ridley were post-mount. They look light and curvy. “A lot of the design process is dictated by the technology from the frame manufacturers,” Riddle said. “A lot of people might look at the post-mount and say that’s a bit old-school, rudimentary. But we have to design the brakes around what the frame manufacturers have done. You see that Specialized, on the frame they have available at the moment, is post-mount. The same as Ridley. At some point in the future, I’m sure those will change because flat-mount seems to be somewhat of a standard. In the absence of a flat-mount frame, we have a version of the flat-mount, which will be tested on compatible frames that will come down the pipe later on.”

The Canyon Ultimate CF SLX Disc will be flat-mount, so its stand-in ran the “new standard” of calipers. The flat-mount calipers seemed a bit beefier and triangular compared to their post-mount siblings.

Within the Italian company, there’s a term used when a product meets all the internal standards and is ready for the consumer. It’s “Campagnolo correcto.” The product has to perform at the pro level and maintain that performance over time. It also has to meet Campy’s safety standards. Then it’s ready for the company’s logo and riders like you. There isn’t any indication as to when the disc brakes will be available to the public. If the release of the first generation of EPS can serve as a model, then we won’t see a consumer version of disc until the end of the road season. Campagnolo has disc brakes, but they’re not yet Campagnolo correcto.