Women’s sprint was the first event on the schedule for the sixth day of competition of Izu Velodrome in Japan. Two Canadians were in contention, with Kelsey Mitchell, world record holder in the event, one favourite. Lauriane Genest, already a bronze medallist at these Olympics in Keirin, also looked strong going into Saturday’s racing.

After making it through the 1/8 round, the Canadians bumped up against each other in the quarters. The two training partners were forced to duel for a single spot in Sunday’s semi finals.

The women’s sprint event is spread out over three days. Mitchell comes into Saturday’s racing having set the second fastest qualifying time. Genest was close behind in fifth. Both Canadians qualified through the 1/16th finals without trouble on Friday. With the event following so close in the schedule behind the women’s Keirin, endurance appeared to be as important for some match-ups as pure speed. 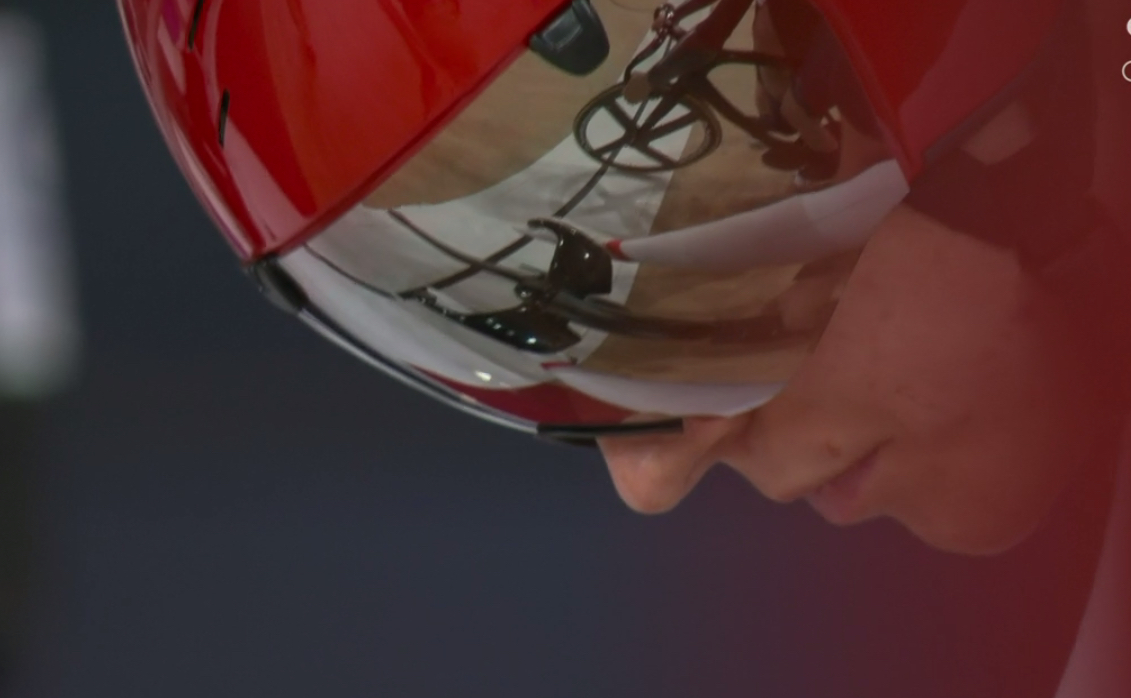 Mitchell was the first Canadian up on the boards. She faced a formidable competitor, the 21-year-old silver medallist from the Keirin competition, Ellesse Andrews (New Zealand).

Mitchell started behind but moved through to take the lead early. Savvy riding from the young Kiwi saw Andrews move high on the boards then dive down in front of the Canadian. With just one lap to go, Mitchell was forced to fight back through Andrews. 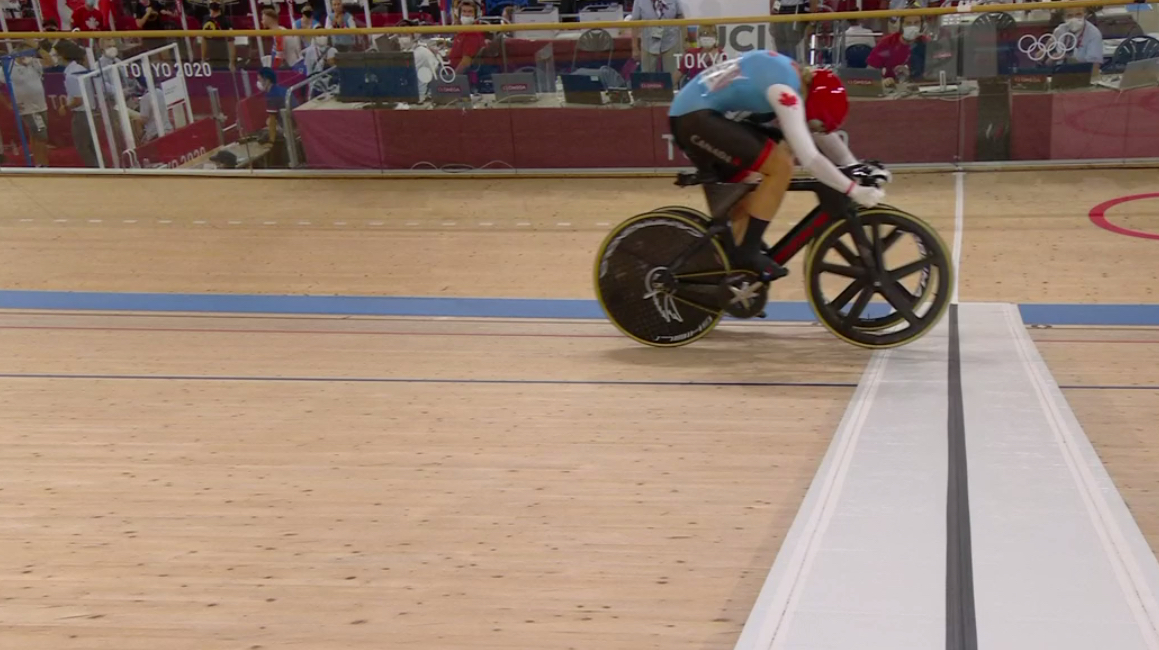 Rounding the final bend, Andrews still held the advantage. Mitchell refused to give up, only taking the lead on the bike throw for the line. Mitchell advances to the quarter finals. Andrews heads to the repechage.

Lauriane Genest, already a medallist in Tokyo in Keirin, faced Great Britain’s Katy Marchant. The Canadian led early, with Marchant climbing high up on the boards looking for an advantage. Genest followed, trying to hold off the Brit. Approaching the final lap in the three-lap race Marchant dove down behind and under Genest, taking the lead – and control of the race in a thrilling move. Genest worked hard, but was unable to pull back Marchant’s advantage.

Marchant advances, Genest heads to the repechage round. 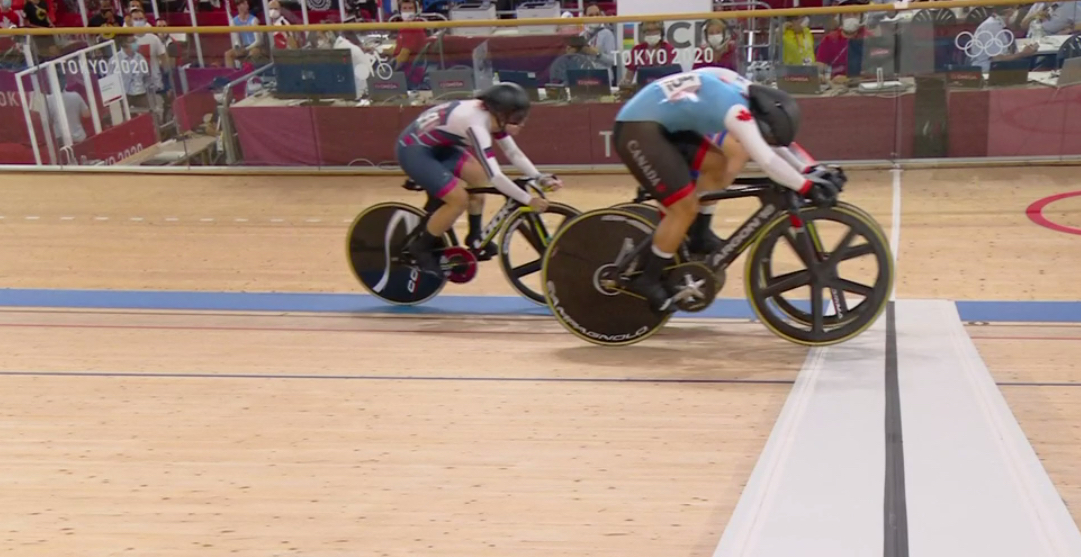 In the three rider repechage, only one rider would go through. Genest faced Anastasia Voinova (ROC) and France’s Mathilde Gros.

Voinova immediately went on the offensive, leaving Genest chasing and Gros on the back. On the bell lap, though, French rider held the lead.

Genest tucked into an aero position and fought to get around the outside of Gros. It came down to the slimmest of margins and a photo finish. It’s Genest at the line, though, edging past the Gros rider by barely a tire width to advance to the quarter finals. 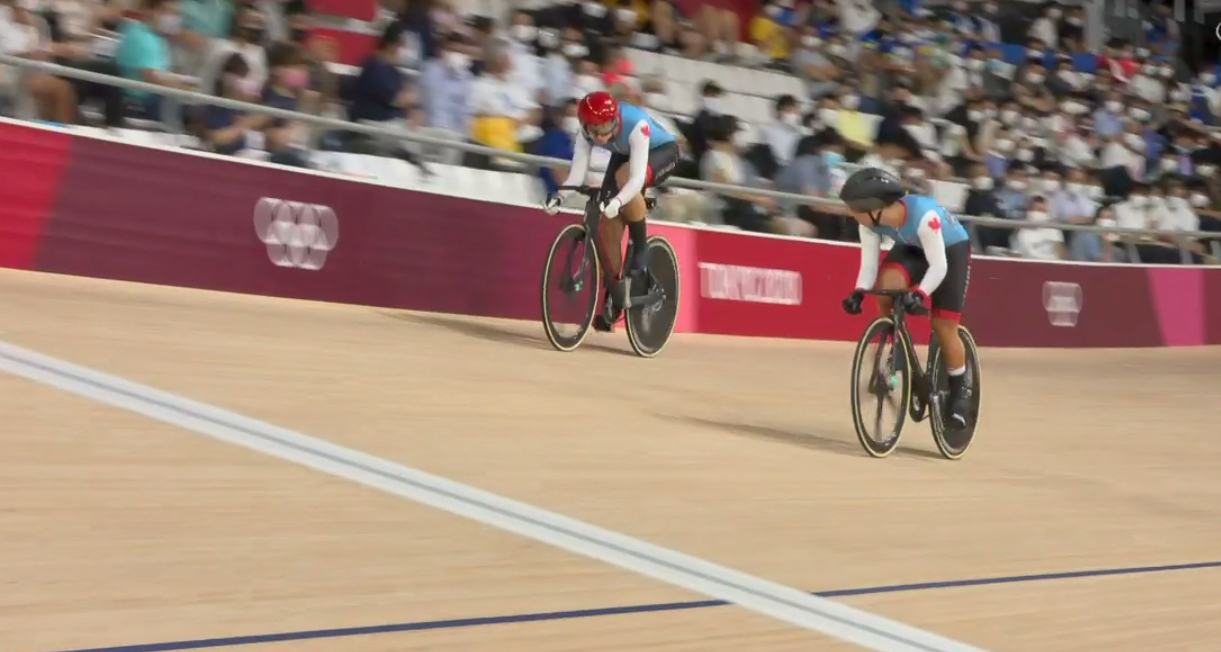 After a solid opening to the tournament, the Canadians ran up against some bad luck. Mitchell and Genest were paired for their quarter final round. Only one of Canada’s two incredibly fast riders would advance to the semi-finals.

In the first race, Genest took the lead and rode an impressive tactical race, holding Mitchell up high on the track. Mitchell’s world-record-setting power could not be held back, though.  Mitchell motored down the final straight to pass Genest and take the advantage.

In the second, Genest again rode a smart and tactical race. The Keirin medallist pushed Mitchell to the line, trying to pull even with her training partner. Mitchell’s power once again pulled her past Genest on the final straight.

Mitchell moves on to the semi-final for Canada.