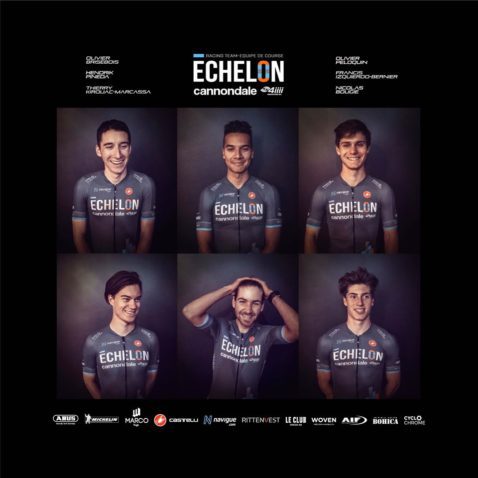 Montreal cycling team Cannondale Echelon has announced the introduction of an Elite roster for 2020. With this announcement they will be celebrating the 10th anniversary of their existence as a team. They began in 2010 as a masters racing team under the name ABC Cycles & Sports, re-branding in 2015 when they embarked on an exclusive relationship with Cannondale, their current sponsor.

The Cannondale Echelon Elite team will be targeting national and provincial races such as Les Mardis cyclistes de Lachine and BC Superweek, where some of them have seen top 10 and top 5 results. They have hinted that they will also be participating in some American races on the East coast.

The all Quebecois team will include six members; of which two are Canadian junior champions and two are provincial criterium champions. It is composed of team manager Olivier Brisebois, Hendrik Pineda, Thierry Kirouac-Marcassa, Olivier Peloquin, Francis Izquierdo-Bernier and Nicolas Bougie. Olivier Brisebois will be racing and managing the Elite roster, drawing from his previous experience racing on Probaclac/Devinci. Five of the six racers also previously raced for Probaclac/Devinci.

The team aims to support rider’s education and enable them to stay in school. They will be providing members with support to focus on their studies, while allowing for flexibility in the racing program. The focus on education is unsurprising as all team members are under 24, with the youngest being 18.

With his masters team holding four Canadian national titles and five provincial championship wins, Alain Cadorette, President and General Manager of Échelon Sports, is looking forward to the future and the edition of this Elite roster. He said: “We look forward to a great 2020 season for our 10th anniversary.”