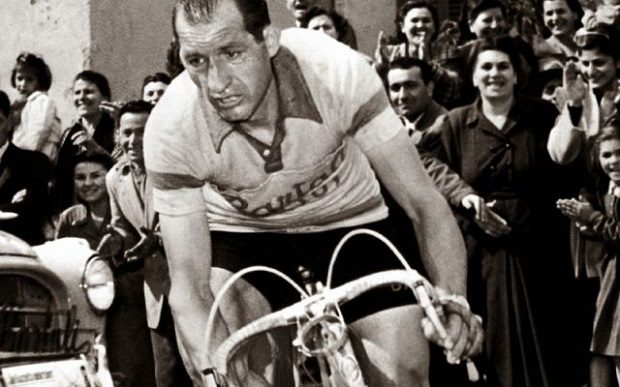 Gino Bartali is a legend for many reasons. There’s his string of commanding victories as an international champion, of course, but more importantly, there’s the historic role he and his bike played during the Second World War—a role for which the Italian cyclist, who passed away in 2000, will long be celebrated.

This month, Israeli Cycling Academy Team, the squad of Canada’s Guillaume Boivin, will be taking to the road to celebrate that legacy in a very fitting way.

On March 20, the team will follow the 186-kilometer route that Bartali biked to help the resistance against the Nazis, efforts that are believed to have helped save some 800 people in the process. As a courier, using the cover of training rides, Bartali poured his strength into the task of carrying forged documents, stowed away in his seatpost or handlebars, across the long, challenging stretch between Florence and the underground resistance in Assisi. Wearing his easily-identifiable jersey, Bartali’s fame and prestige meant that neither Italian police nor German troops, if they suspected anything, would risk stopping him.

It was a mission that may have been out of reach for another rider, but not for the star three-time Giro d’Italia winner.

Cycling Academy will follow the same route, beginnig their ride on March 20 in Florence and ending it in Assisi—a trip estimated to require a day’s riding. All of the squad’s 13 riders, including Boivin, will participate.

“As an Israeli team,” said Cycling Academy’s principal, Ran Margaliot, in conversation with Israel’s Haaretz, “we have a special connection to Gino’s story. We wanted to increase the knowledge in our riders and the general public of what he did—it’s a beautiful symbol of how sports can be used to do good.” Noting the very real dangers that Bartali faced in carrying out his secret rides, experiencing the same terrain, Margaliot added, can be illuminating.

“It’s important for us that our riders,” he said, “have an opportiunity to take the same roads that Gino traveled and understand the huge risks he took to do what he did and why he did it: not because he had anything to gain, but because it was the right thing to do.”