The Tokyo 2020 Olympics have been delayed until 2021, but that hasn’t stopped Cycling Canada from announcing most of the road and track cyclists that will be racing this time next year. Nine women and eight men that will represent Canada at the Olympic Games in Tokyo, Japan in 2021 were announced this Wednesday.

Even though there is an extra year before the Olympics, the qualification window for road and track events are is closed, so this selection is final.

Marine McBean, the Tokyo Team Canada Chef de Mission describes the Tokyo Olympics as 2020 plus one, and sees the extra year as an opportunity for the Canadian athletes to improve even more.

Kelsey Mitchell, who will be racing on the track team, agrees. “Although I was initially upset” she says, “I’ve decided to look at the Games postponement as a blessing in disguise, which gives me an extra year to get stronger in the gym, to become even better at riding my bike, and to grow even more as an athlete. My initial dream was to go to the Olympics, but now I’m dreaming of winning a medal for Canada!”

One year from now the men’s and women’s road races will start in Musashinonomori Park in northwestern Tokyo and finish at the Fuji International Speedway near the iconic Mt. Fuji. The women’s race will be 137km and the men’s will cover 234km.

Two of Canada’s WoldTour pros make up the men’s road team. Mike Woods of EF Education First Pro Cycling will compete in his second Olympics in 2021. Although Woods transitioned from running to professional cycling later in life, he has proven to be one of the best climbers on the UCI WorldTour circuit, winning a stage at the 2018 Vuelta ciclista a España and finishing third at the Road World Championships the same year. Recently he came back from a broken femur to win a stage in the Virtual Tour de France.

“Ever since the 2020 Olympic course was revealed, I’ve had a big X on my calendar, and although that X has had to move, my goal for the Olympics remains the same,” said Woods. “Competing at the 2016 Games in Rio was a dream come true, but I was unable to perform at my best due to an injury. Since then, I have proven that I am capable of competing and winning against the best riders in the world, and I hope to do the same in Tokyo on a course that really suits my abilities.”

Woods will be joined by Hugo Houle of Team Astana, who is known as one of the world’s best support riders. Houle will assist Woods in the road race and compete in the time trial.

A third men’s road cyclist will join Woods and Houle, but fans will have to wait until May 2021 to find out who it will be.

Kirchmann is currently ranked in the top-10 in the world and has had numerous podium performances throughout her career, including at La Course by Le Tour de France, the Grand Prix Cycliste de Gatineau and many more. She’s due to return to racing in August as the women’s WorldTour re-starts.

Canuel is better known for her time trial expertise, winning medals in several individual and team time trial races in recent years. She is the 2019 Canadian road champion and finished fourth at the 2014 World Championships.

Canadians will compete in eight of the twelve track medal events, including women’s and men’s sprint, keirin and team pursuit, women’s omnium and the men’s madison, which is returning for the first time since the 2008 Olympic Games. 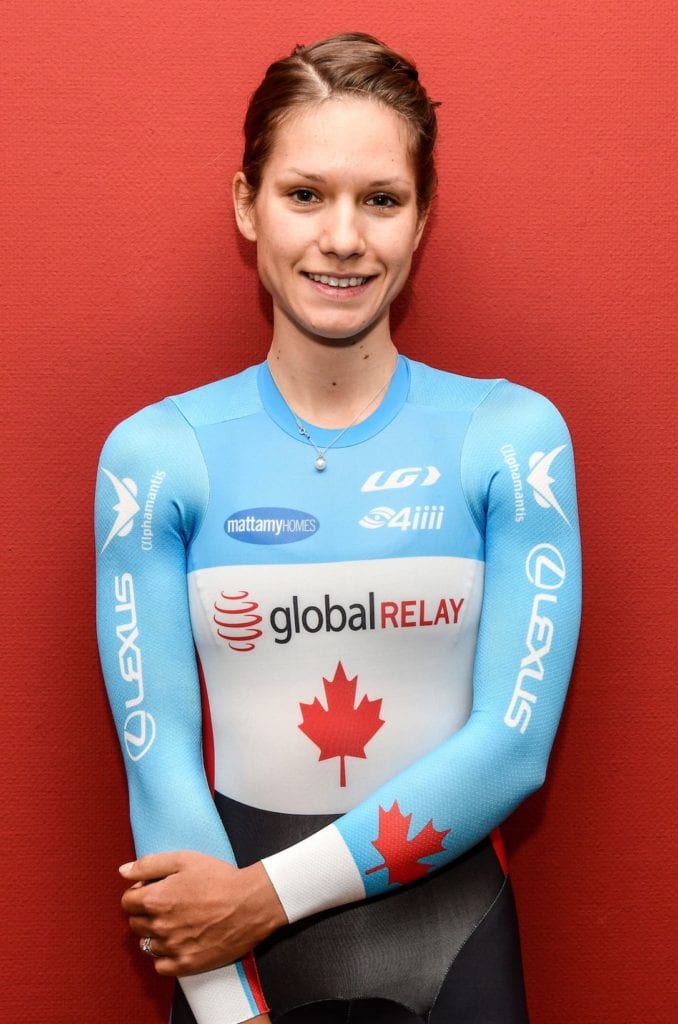 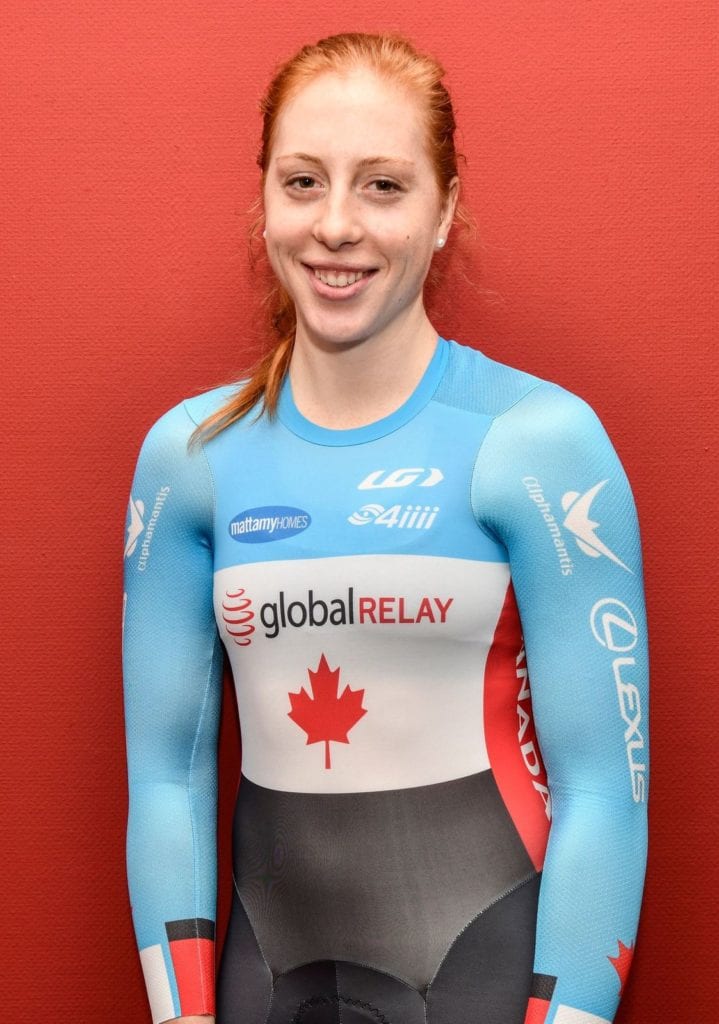 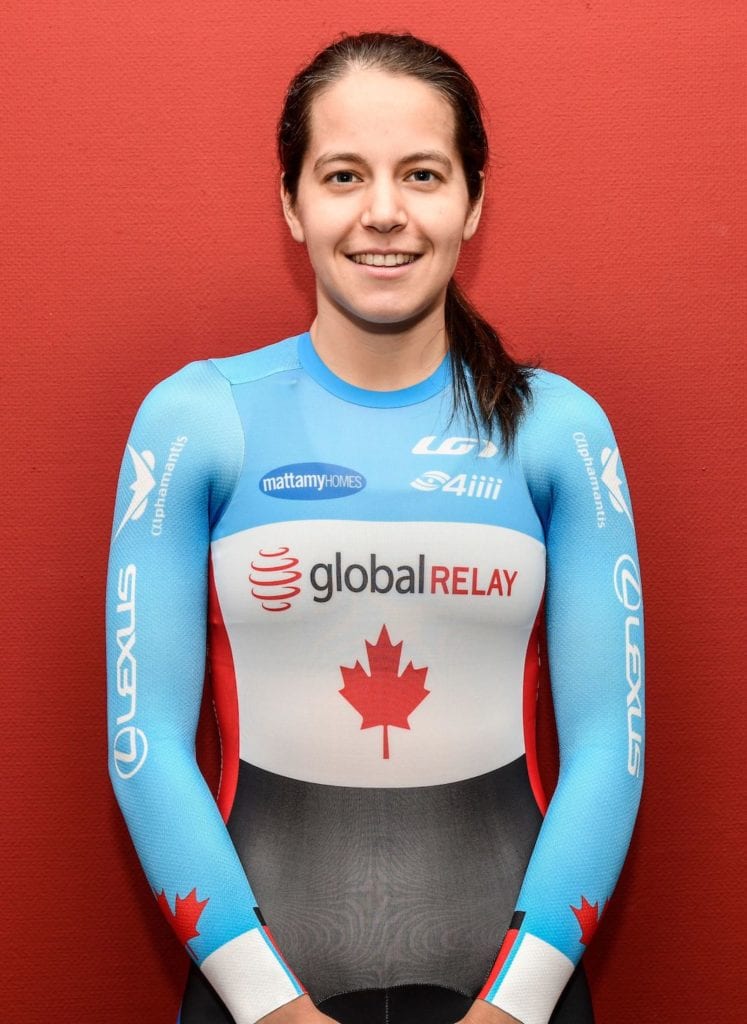 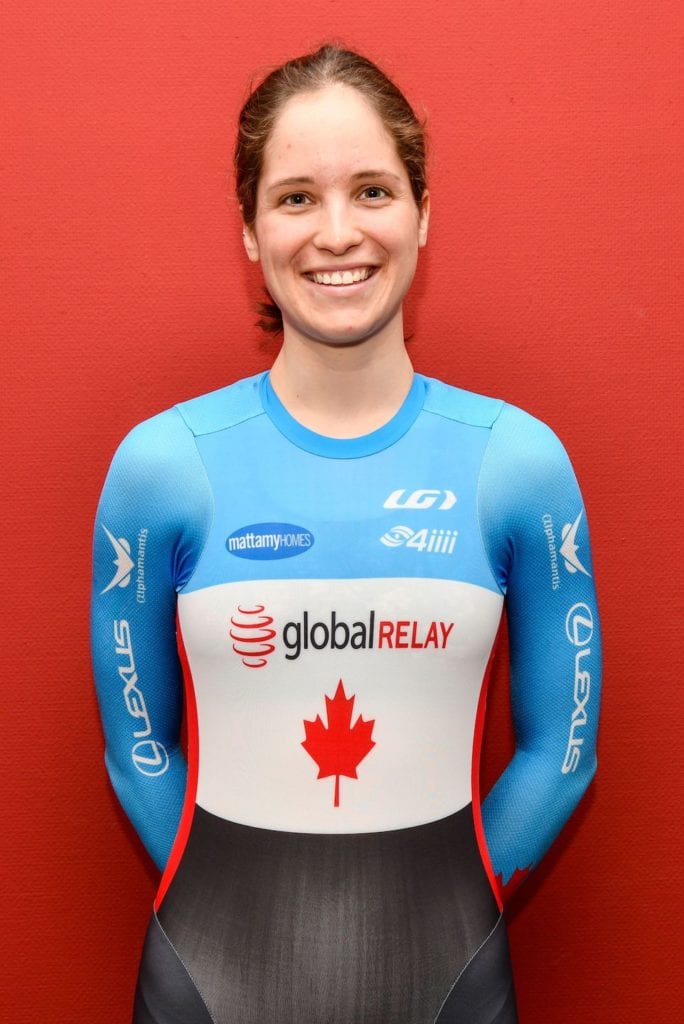 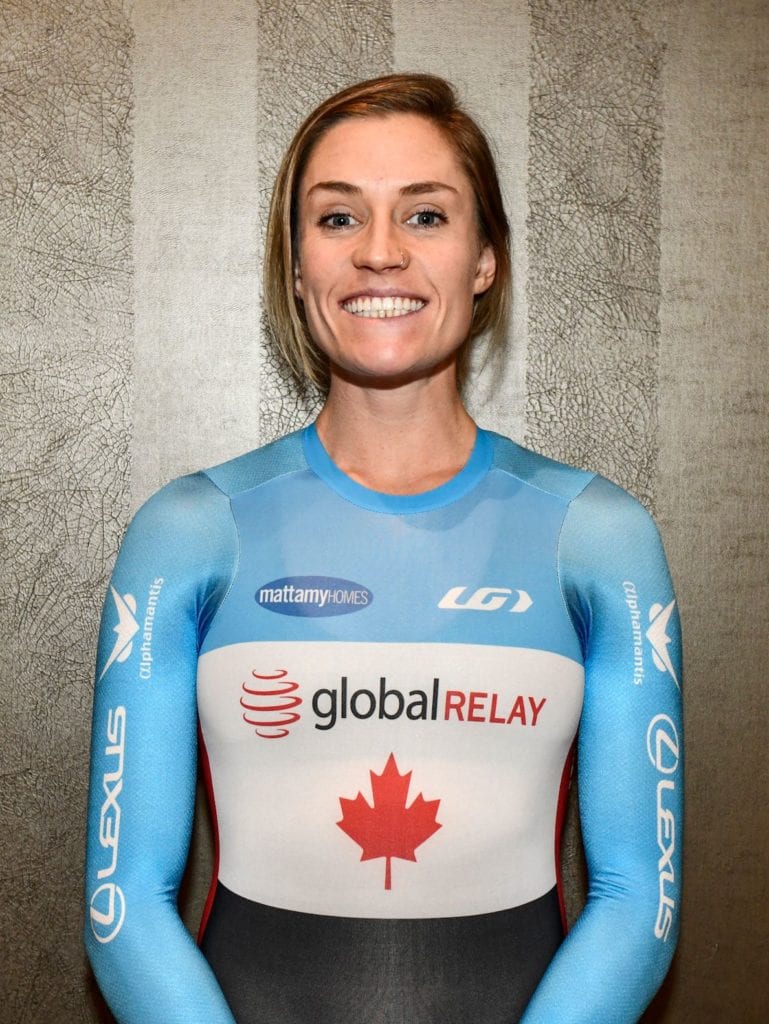 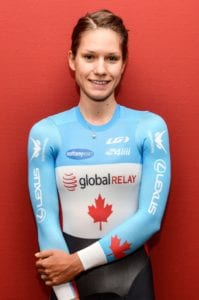 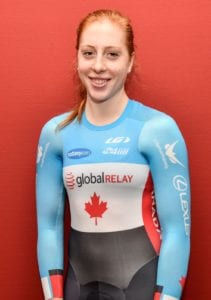 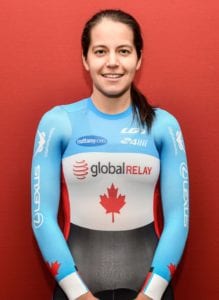 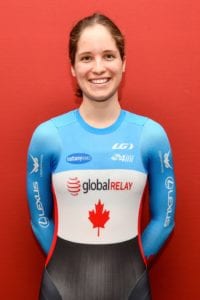 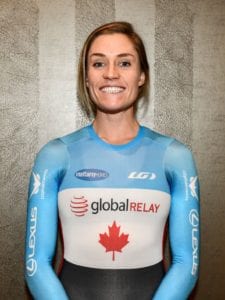 The Women’s team pursuit squad won bronze medals at the 2012 and 2016 Olympics, and they will be going for a third Olympic medal next year. Double Olympic medallist Jasmin Duehring will anchor the squad. She’ll be joined by her Rio 2016 teammates Allison Beveridge and dual season Olympian Georgia Simmerling, while Annie Foreman-Mackey and Ariane Bonhomme will be competing in their first Olympic Games.

Allison Beveridge will also be competing in the omnium. “The games are definitely special,” she says, “and having teammates that have been there before is an advantage.” 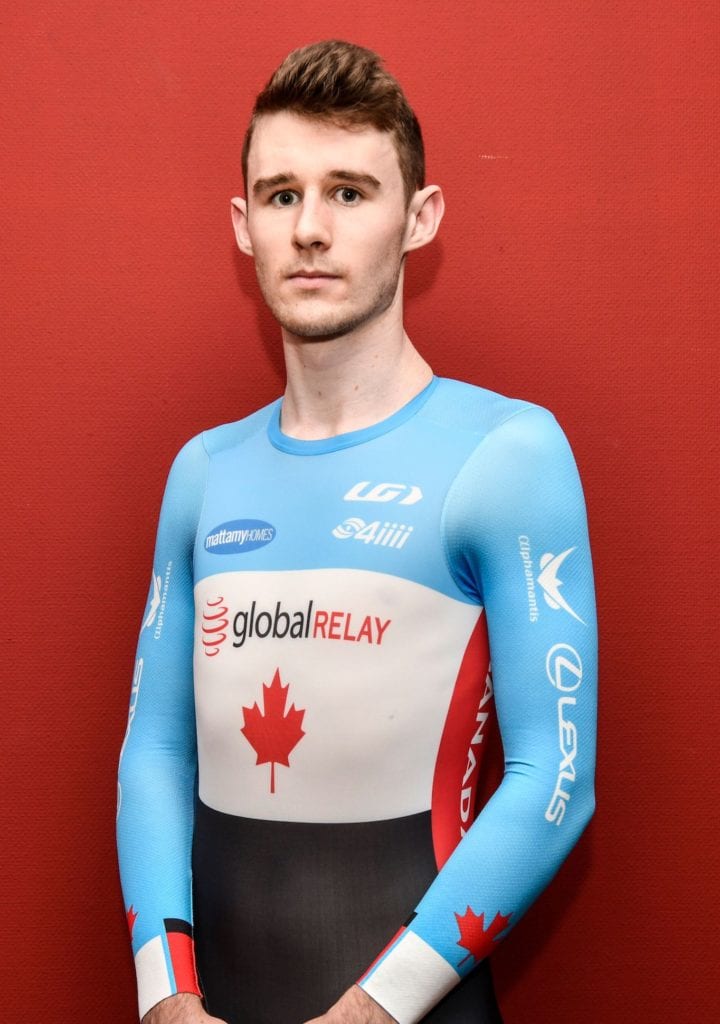 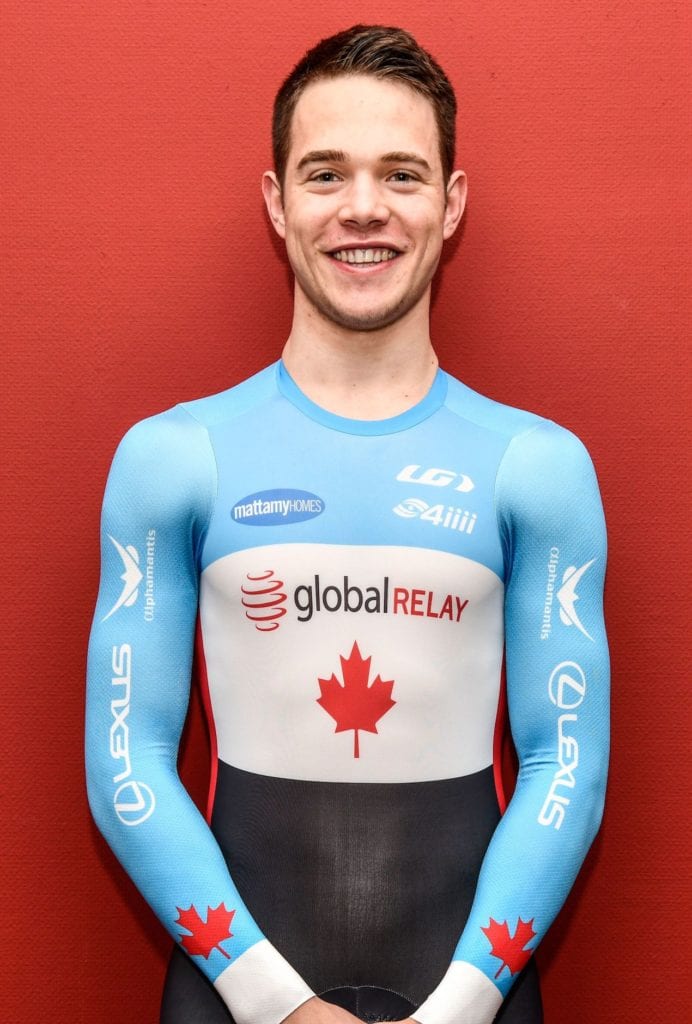 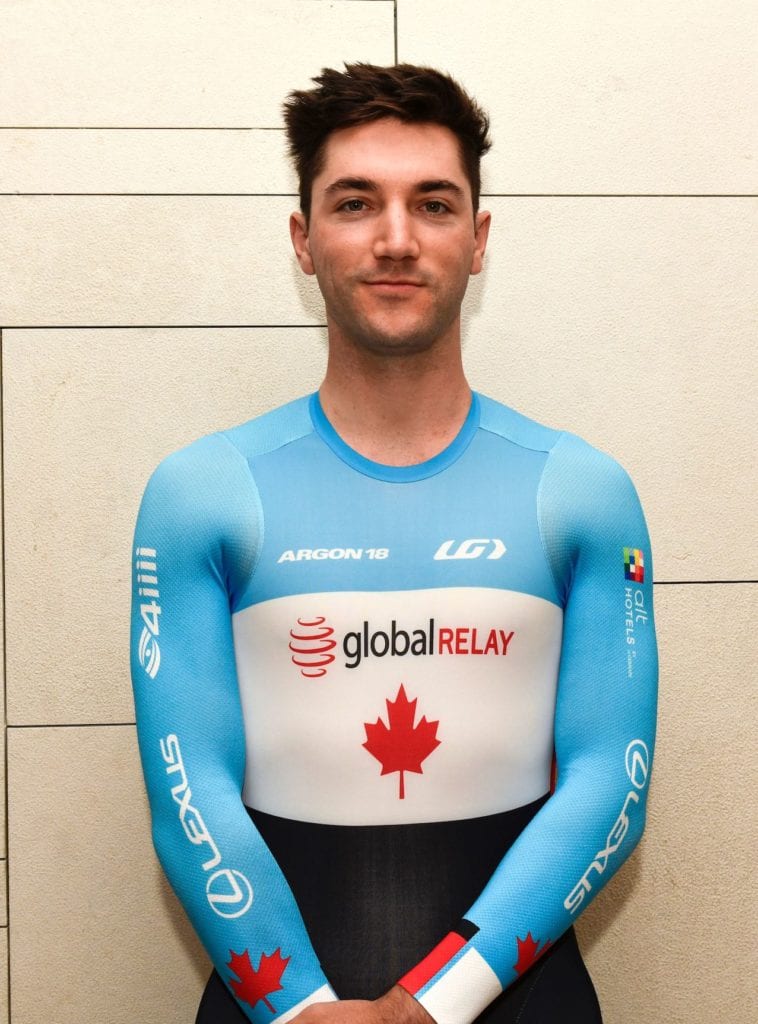 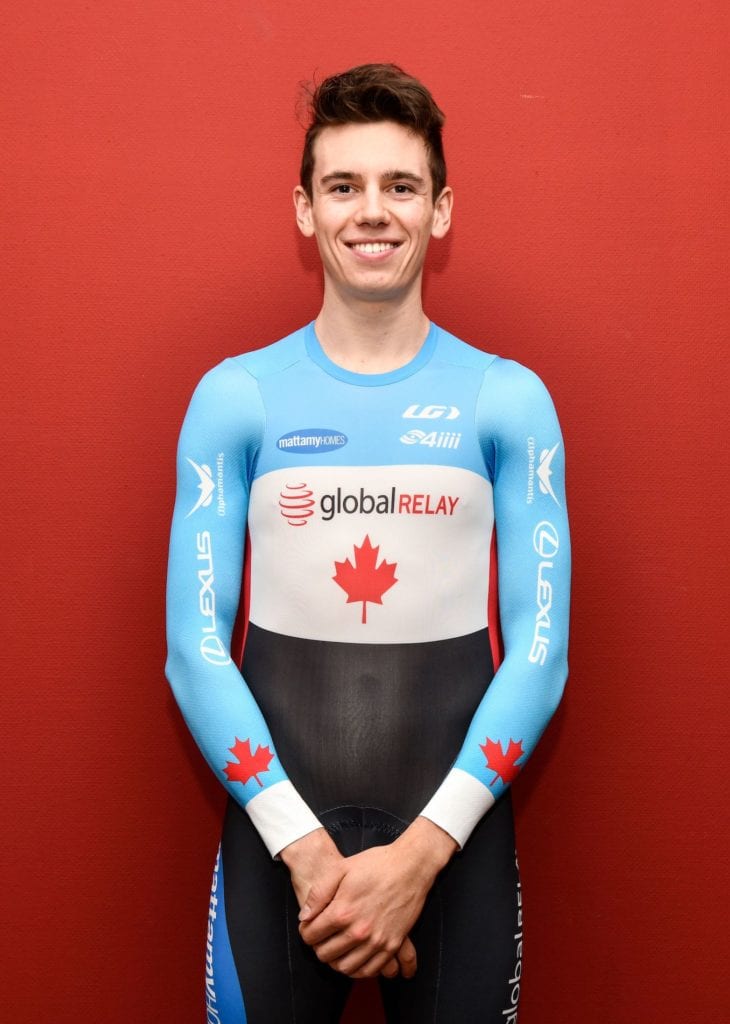 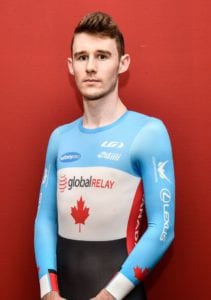 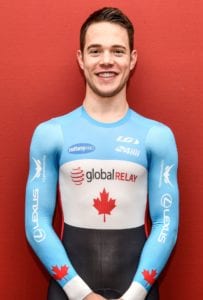 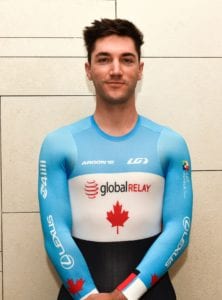 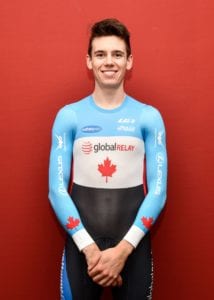 For the first time in more than 30 years Canada will send a men’s team pursuit squad to the Olympics. The young team, which finished the season ranked in the top-10 in the world is composed of Derek Gee, Jay Lamoureux and Michael Foley, as well as two-time Olympian speed skater Vincent de Haître, who joined the team after the PyeongChang 2018 Olympic Winter Games. All four athletes will compete in the team pursuit, with Gee and Foley also competing in the madison.

“After competing at the 2018 Winter Games, I expressed my intent of committing myself full-time to cycling with the goal of qualifying for the 2020 Games,” said de Haître. “Two years later, I’ve competed at my first Track World Championships as a member of the Men’s Track Endurance squad and I hold the national record in the kilo and the men’s team pursuit. The last years have definitely tested my skills as an athlete, but I am more focused than ever and look forward to competing at both the Summer and Winter Games only six months apart.”

De Haître will have only 180 days between the Tokyo closing ceremony and the Bejing opening ceremony, but he says, with the help of his coaches, he’s been able to work out a plan.

Cycling prodigies Kelsey Mitchell and Lauriane Genest, who both shot through the national ranks in the last three years, will be representing Canada in both the sprint and keirin events.

Mitchell was first discovered in 2017 through the RBC Training Ground program. She quickly produced podium results at the 2019 Pan American Games, followed by four World Cup medals during her first international race season. Genest also had a breakthrough season in 2019, beating some of the world’s best sprinters and finishing on the World Cup podium twice. 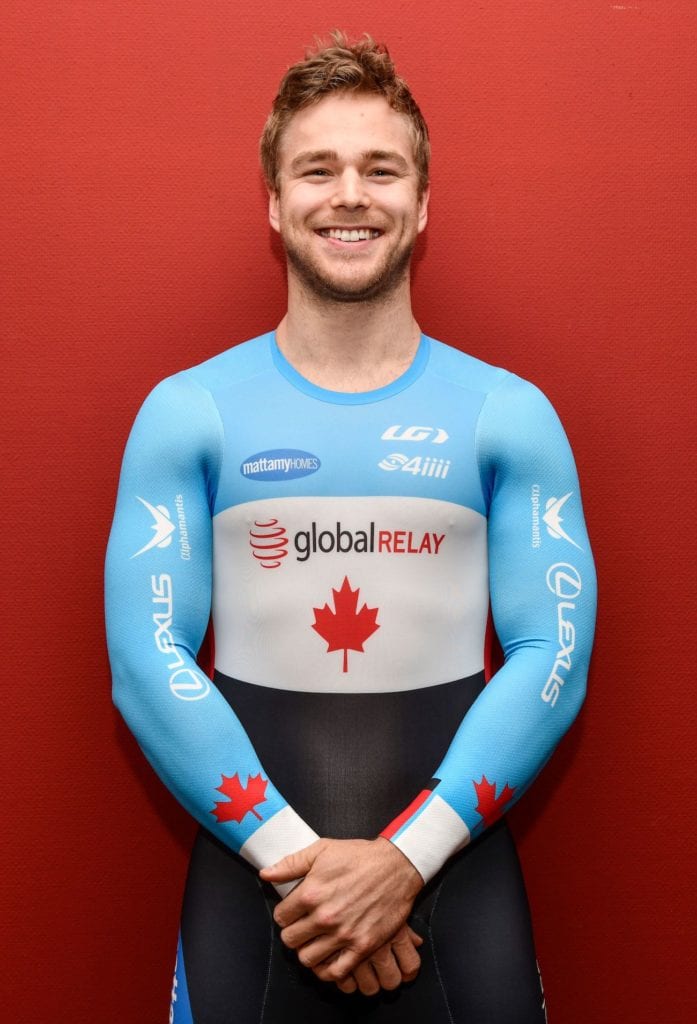 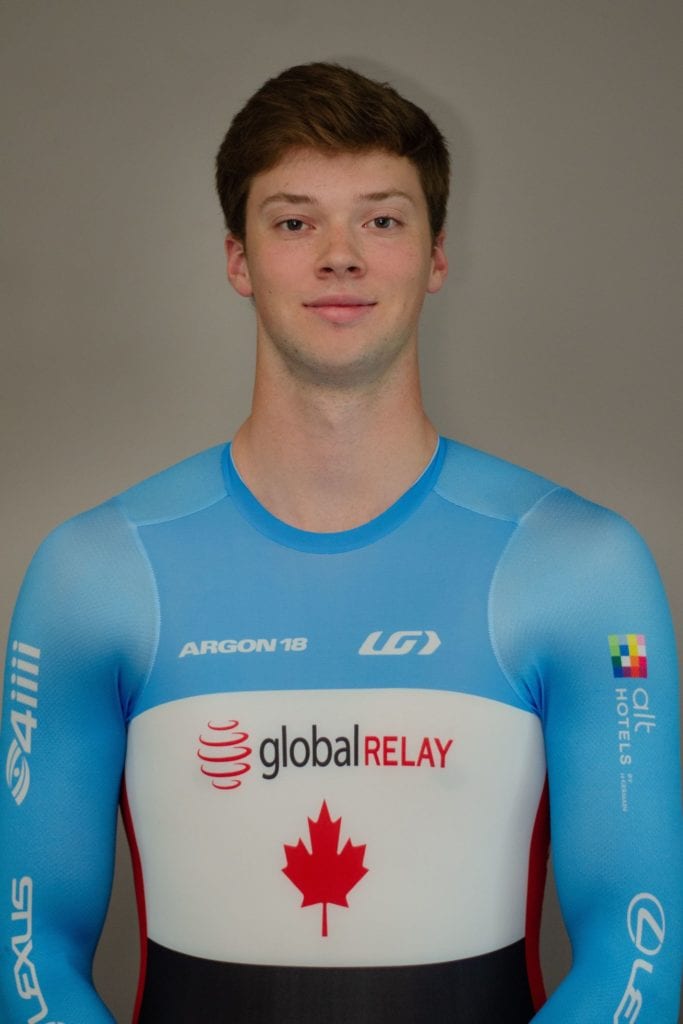 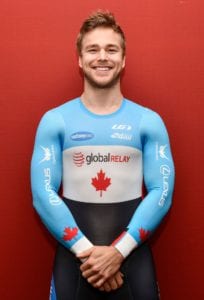 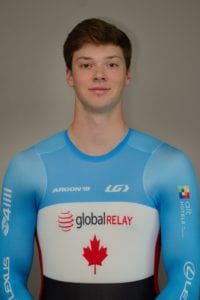 Joining them on the men’s side will be veteran Hugo Barrette and Canadian champion Nick Wammes. Barrette has come back from a major crash this year and is ready for his second Olympics. As an experienced cyclist he hopes to be able to communicate to his younger teammates that one year can make a big difference in training. “Most of these young athletes have a lot of potential,” he says.