With the calendar year approaching it’s end, Cycling Canada have revealed the national and international competition calendar for 2018. The season runs from March to December with new and returning events coast-to-coast.

The major highlight of the calendar was the announcement there would be a total of eight UCI sanctioned cyclocross race days on Canadian soil next year, up from only 3 in 2017. However, the Canada Cup cyclocross series gets a new stop, two new events are being added to the downhill Canada Cup series and the track plus road competition schedules were rolled out so racers can begin planning their major targets for the next year.

The cross country Canada Cup mountain bike series opens on March 31 at Bear Mountain in Victoria. The series runs for six events concluding on August 5 at a new venue in Kentville, N.S.. Categories for under-17 men and women have been added with riders awarded the same points scale as in the junior category. Three cross country junior series events are on the calendar in Bear Mountain, Baie St. Paul, Que., and Trek Store in Oro Station, Ont.. Canada’s top cross country racers will battle for the maple leaf jersey in Canmore, Alta. on July 21 and 22.

The cross country season in Canada is headlined by the return of the UCI World Cup in Mont-Sainte-Anne, Que. on August 11 and 12. A round of the downhill World Cup is also hosted at one of the longest running venues on the World Cup mountain bike calendar.

The downhill Canada Cup has been bolstered for 2018 with the addition of rounds in Fernie, B.C. and Silver Star, B.C. before the national championships at Panomara on July 28 and 29. The three events headline an exciting month of racing.

The road calendar is kicked off with the Hayman Classic in Penticton, B.C. which gives junior and cadet racers the chance to participate in a stage race. Canadian masters nationals take place in Victoria in June. The month is filled with road events with the UCI-sanctioned Grand Prix Cycliste Gatineau and Chrono Gatinieau for elite women, the Grand Prix Cycliste de Saguenay and Tour de Beauce for elite men all taking place

The racing then heads to Kamloops, B.C. for the Canadian road championships for elite, para and junior athletes on June 21 to 24. The Tour de la Relève Rimouski in Quebec takes place at the beginning of July then it’s over to BC Superweek with the UCI-sanctioned Delta Road Race and Global Relay Gastown Grand Prix.

On July 17 to 22 the Tour de l’Abitibi which attracts junior racers from around the world hosts it’s 50th edition. The final three road events on the calendar attract pro men fields. First is the Tour of Alberta then the WorldTour Grands Prix Cyclistes Québec-Montréal.

The BMX calendar runs in July and August with four events in the Canada CUp series. On July 7 and 8, the UCI-sanctioned Toronto stop takes place, followed by Drummondville on July 14 and 15, Abbotsford on August 18 and 19 anc ocnludes in St. Albert, Alta. on August 25 and 26. The national championships take place in Drummondville in conjunction with the Canada Cup stop. The BMX freestyle World Cup stops in Edmonton on August 26 and 27 to wrape up the calendar of events in BMX for the year. 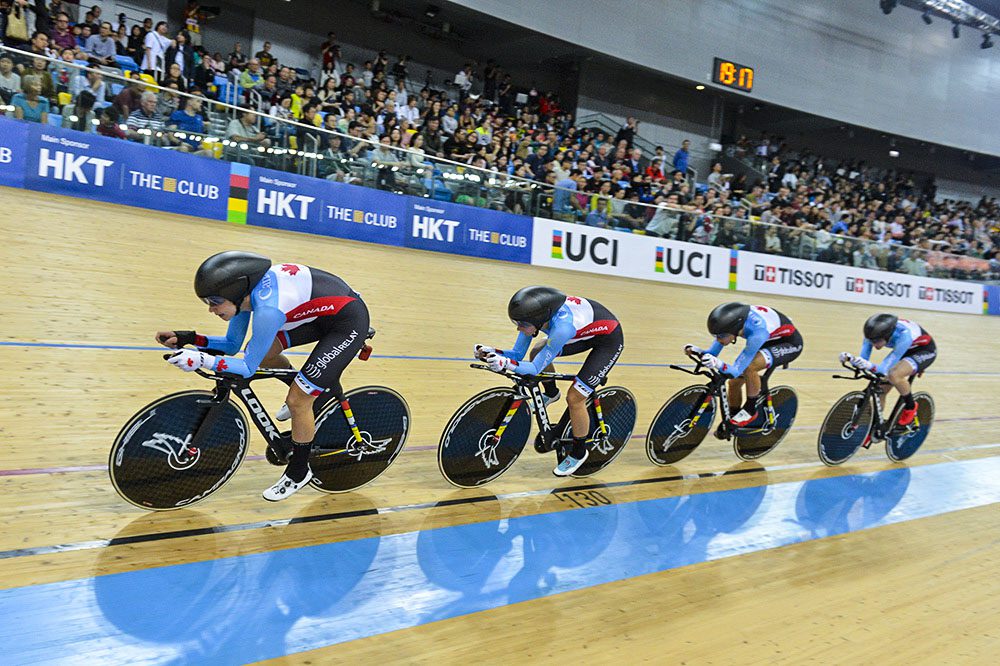 The track calendar revolves around the Mattamy National Cycling Centre in Milton, Ont. with the U17, junior and para national championships on April 12 to 15. The elite and masters national championships take place in Milton on Sept. 28 to 30 and the second edition of the UCI track World Cup in Milton will be scheduled for December with the date yet to be confirmed. Cycling Canada is also working on finalizing dates and locations for 2018 Eastern and Western Track Challenges.

Four para events are on the UCI calendar with the para track nationals and UCI C1 Challenge in Milton, Ont. on April 14 and 15. The Défi sportif AlterGo road event in Montreal is next on the calendar  with para road nationals taking place in Kamloops on June 21 to 24.

“We are very excited to announce our complete 2018 national and international race calendar. Through the support of our provincial partners and event organizers – both new and returning – we are confident that this calendar will provide athletes in all disciplines every opportunity to perform at their best on Canadian soil,” said Josh Peacock, competition coordinator for Cycling Canada. “We would like to extend a very special thank you to all of our dedicated organizers and host communities who continue to support the sport of cycling across the Nation, and look forward to another great year of racing.”