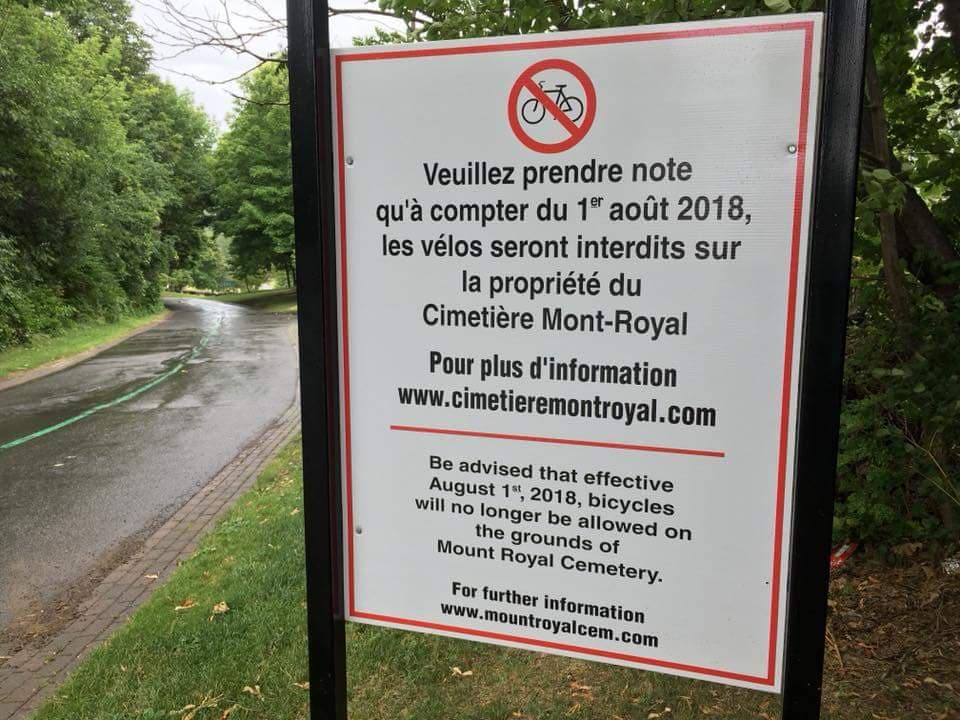 Montreal cyclists will no longer be permitted to ride in Mont Royal Cemetery as of August 1st. The cemetery sits on 165-acres on the top of the mountain and is a quiet green space that has been used by walkers, runners and cyclists. It has been opened to the public since 1852. The cemetery is bordered by Mount Royal Park and the Camillien Houde climb so many recreational cyclists would ride in or through the property on rides.

The move to completely ban cyclists comes after the private property that makes up the cemetery, which is privately owned by a non-profit organization, had restricted the size of groups of cyclists in the cemetery to under four and imposed a strict 10 km/h speed limit. The gates of the cemetery on Remembrance and Camillien-Houde also underwent modifications to make it harder to enter the cemetery with a bike.

In June, the cemetery threatened to ban cyclists saying it was being used as a training ground. Part of the influx of riders had been attributed to the partial closures at the Circuit Gilles-Villeneuve. On Strava, popular segments in the cemetery attract lots of local riders including the popular Mountain view climb which counts over 10,000 attempts by 1,800 different Strava users.

“In recent months, we have noted an influx of groups of cyclists who are abusing the privilege of access to our property by using it as a training ground,” a flyer handed out to riders in the cemetery stated. “Many cemeteries…have long since banned bicycles from their grounds. We will be forced to do so unless our Rules for Cyclists are respected by all.”

The Mont Royal Cemetery was in the news in the spring when it publically opposed the move by Montreal’s government to restrict car access on Mont Royal after the death of 18-year-old Clément Ouimet. The pilot project began on June 1 and will run until the end of Oct. It’s intended to stop through traffic on Remembrance Rd. and Camillien-Houde Way.

“We would support status-quo as far as access from the east and west is concerned,” said David Scott, the executive director of Mount Royal Commemorative Services. “But we would certainly support measures to improve safety for cyclists.”