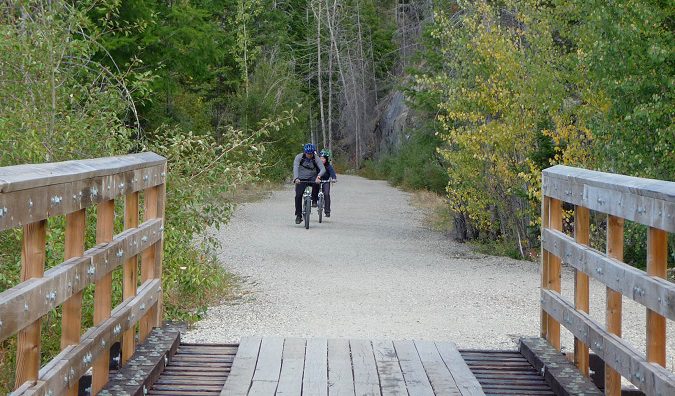 As the temperatures dip and the shadows get longer, some — perhaps many — are no doubt lamenting the loss of summer, anticipating snow, sleet, rain and wind, or maybe all of the above.

For others still, this time of year means only two things: warmer clothes, and maybe fatter tires.

Across Canada, as autumn sets in, cycling season simply shifts gears rather than end altogether. There’s a number of rides and events that take advantage of the cooler, more forgiving fall conditions. After all, depending on where you live in the country and what its worst weather means for your cycling, we’re still several weeks away from the truly unpleasant, inclement, even dangerous conditions that can force many of their bikes for the season. Until then, September and October truly are bike-friendly months, with the sunshine, the crisp air, and the changing colours presenting all-new attractions.

Here’s a sampling of what fall has in store, particularly for the intrepid long-haulers among us.

This truly is one of the best Lower Mainland experiences for cyclists, with the roads from Vancouver to Whistler, B.C. closed to everything but bikes. Back in 2010, the RBC GranFondo Whistler was the first world-class gran fondo — which, for those who don’t know, roughly translates to “big ride” in Italian — introduced in Canada, first intended as a legacy project after the 2010 Vancouver Olympics. What started that year with 4,000 participating riders almost doubled the following year, as well as in 2012, to involve 7,000. With accolades as one of the best cycling events in Western Canada, that number will doubtlessly continue to rise.

The one-day cycling event happens on Saturday, September 12 and involves a 67-km Medio ride, the 122-km Gran Fondo, a 122-km Giro race, and for the grindingly ambitious, a 152-km Forte.

On September 19, 2015, The Appalachian Classic rolls out from picturesque Victoriaville, Quebec. Covering the rolling, breathtaking vistas of the village-strewn big-sky region of La Belle Provence, the Gran Fondo segment of the event — there are races for the more aggressively-minded, too — is divided between three route options. The first, ‘The Appalachian Classic’ Gran Fondo, is a demanding 135 km route that ends at Mount Arthabaska, Quebec, with roughly 2,700 metres of climbing. The next, called the ‘Panoramic’ Gran Fondo, starts in Victoriaville and ends where it began, covering 110 km with 1,800 metres of climbing. The ‘Discovery’ route, lastly, is the most casual and laid-back of the rides, covering 65 km with little more than 300 metres of climbing.

Entry fees are $125 for the Appalchian Classic, $105 for the Panoramic, and $85 for the Discovery route. Further information can be found by visiting theappalachianclassic.com/gran-fondo.

Leave it to MEC to host one of the best, most ambitiously high points of the cycling year. In multiple communities, including Calgary and Barrie, Ont., the venerable name in outdoor Canadian living hosts century rides to welcome fall. In Calgary, for example, the 100 km route that kicks off on September 20 rolls through the spectacular hills of southern Alberta, starting in the Turney Valley and continuing up to Highwood Pass. On October 3, Barrie’s ride starts at the Oro Fairgrounds, traverses the hills of Oro-Medonte, Ont., and returns back to its point of origin. It’s a challenging route, but with both rides having a low entry fee of $35, it’s one of the better, more economical ways to cap off the sunny season of riding.

Further information can be found by visiting MEC’s Events page, with details about routes, requirements, and events in other cities, too.

Based in Niagara Falls, Ont., Great Canadian Bicycle Tours is quick to remind would-be participants that it’s not a racing club. Instead, the group works with the operating belief that Ontario’s scenery is best explored by bike, and has structured its rides and offerings to be accessible to all. For $20, cyclists can participate in all of the club’s rides — including weekend tours on top of the weekly rides — with an alternative option to pay $5 per ride.

With apple season and the days of bursting crimson foliage coming to southern Ontario, there are a number of rides coming up. This Sunday, September 13, the group is hosting a tour of the Niagara Falls area by bike from 10am to 2 pm — a roughly 65-95 km ride. The following weekend on September 19, and again on September 26, Great Canadian Bicycle Tours also hosts a ride through Mennonite country, basking up close in the beautiful simplicity of country living.

More details can be found by visiting http://www.gcbt.org/home.