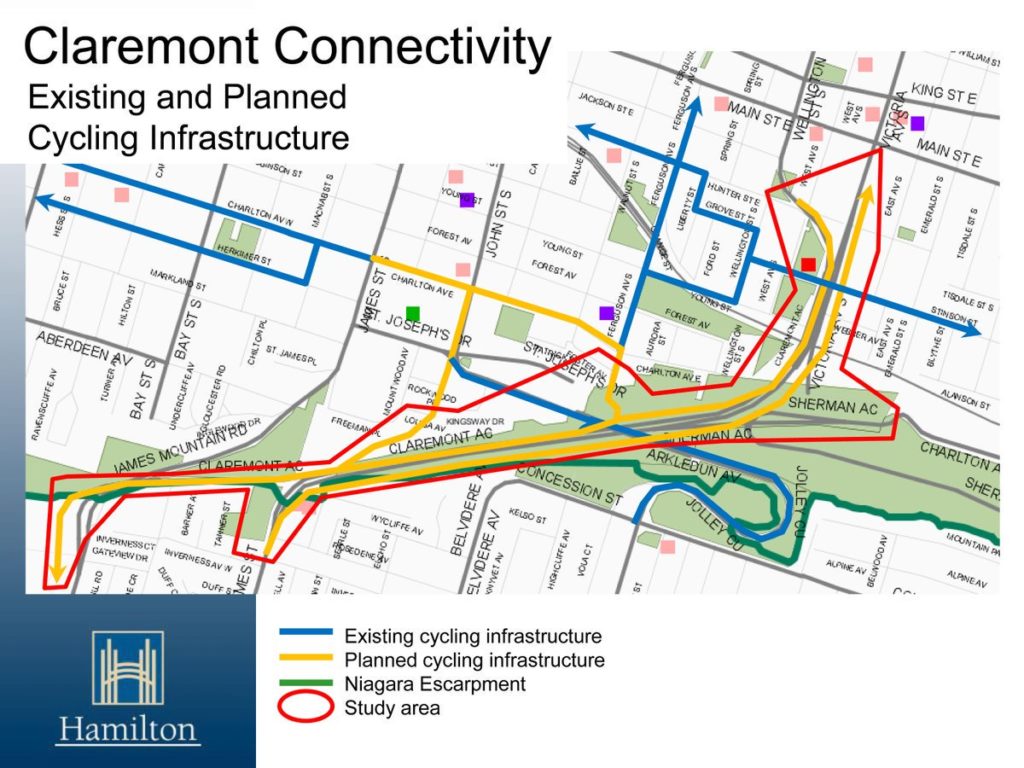 After a lengthy debate over a proposed $200,000 bill to design a bike path on Claremont Access in Hamilton, city councilors Donna Skelly and Terry Whitehead brought up a contentious bike licensing idea for the city. After debating over who should pay for the new bike path, the city is looking into whether it has the authority to license bicycles The Hamilton Spectator is reporting.

Last week, there was a proposal to put off the construction of a protected bike lane on Claremont Access where in December 2015, Jay Keddy was struck and killed by a truck. The death of the 53-year-old teacher who died on the road that ascends the escarpment spurred cycling activists and some councillors to propose the addition of a protected bike lane which is estimated to be a $2.3 million project.

However, the project remains under-funded with Whitehead—a supporter of the project—suggesting that cyclist could help fund it by paying a licensing or registration fee. Whitehead said it would provide the only safe connection between the escarpment and the lower city for cyclists.

“They should have some skin in the game,” Whitehead said of his fellow councillors adding that the path would provide the only protected connection between the escarpment and the lower city but that cyclists could help fund it by paying a licensing or registration fee. Hamilton has a 20-year cycling lane plan that is currently lagging behind schedule.

Skelly, the councillor for Ward 7 said, “We have to have a license to fish in Ontario…to do all sorts of things.” She added that licensed bicycles would allow red light running cyclists to be caught on camera.

The motion for bike licensing was ultimately changed to a request for a summary of the recent bike licensing debate in Toronto—where the idea was recently struck down— and a clarification whether Hamilton has the jurisdiction to license bicycles.

The city of Toronto has extensively studied the idea of bike licensing in the 80s and 90s. On the city’s website, there is even an entire page devoted to the issue noting that the administrative costs of creating a licensing system would be so high it would generate no revenue and that many cyclists are young so administering appropriate tests for different ages would be a cumbersome administrative undertaking. It also notes that law enforcement’s time is better spent in other ways than checking bike licensing and that other initiatives can be taken that are more cost effective to ensure compliance with traffic laws. The cities efforts, it says, are better spent in an overall strategy to better promote safe cycling because of the benefits it provides to people’s health, the environment and communities.

Other arguments against licensing include the fact that law enforcement can already ticket cyclist who break the law. Cycle Hamilton came out and said they oppose the idea of bike licensing with vice-chair Johanna Bleecker saying, “I think the research has been pretty clear that it’s not worth it, that any revenue you might create is eaten up by the bureaucracy of it all,” she said. “I think planning and building better streets is how you improve safety.” The idea was similarly opposed by Cycle Toronto.

The Hamilton city planning staff with report back on the jurisdiction question in a later meeting. The earliest the project could start is 2018.